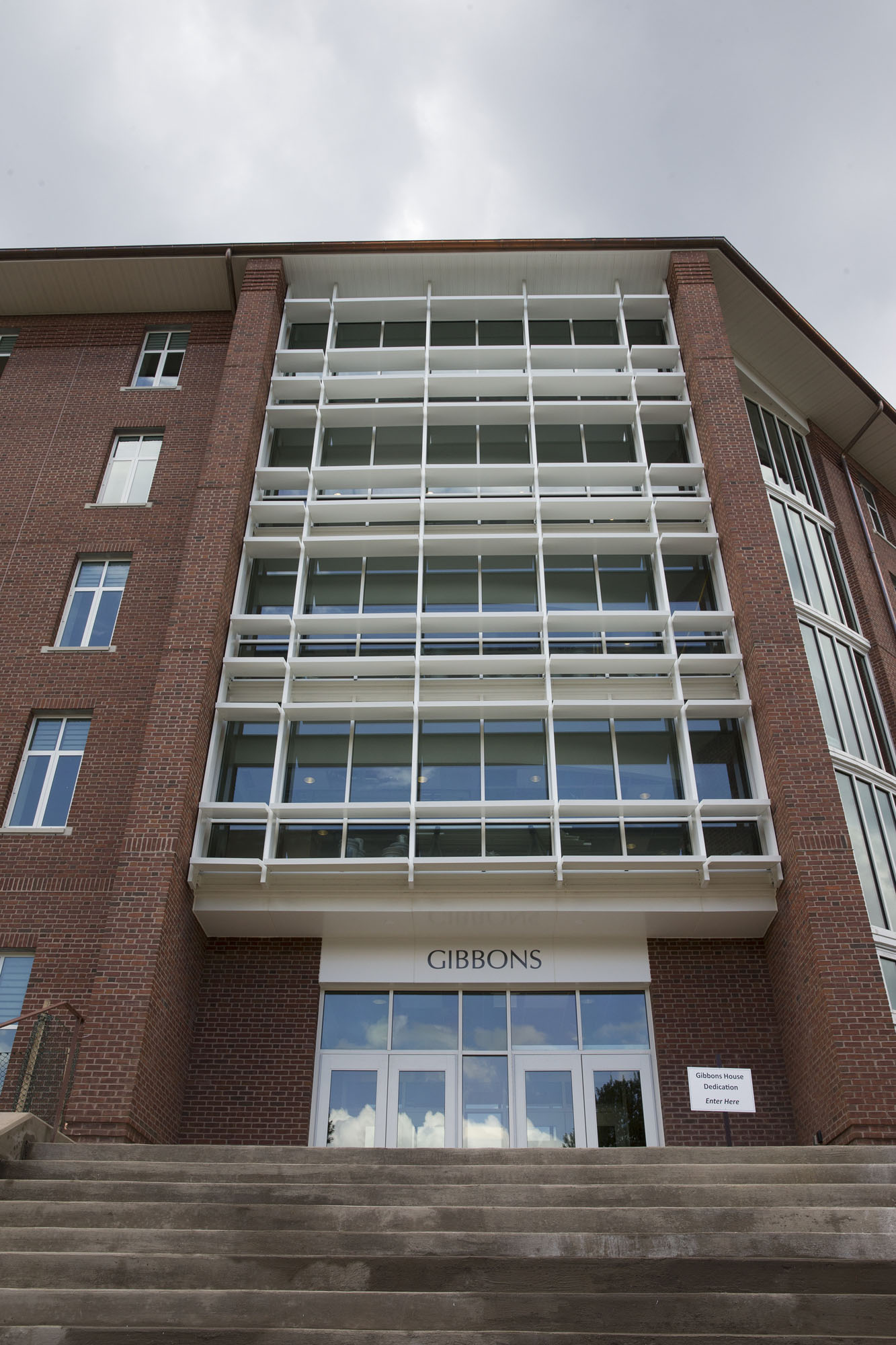 William and Isabella Gibbons were husband and wife, butler and cook, enslaved by different University of Virginia professors until 1865. After emancipation, Isabella became a teacher for more than 20 years. William became a well-known minister in Charlottesville and in Washington, D.C.

They were honored Friday afternoon for their contributions to U.Va. and their example of perseverance and accomplishment throughout their lives at the dedication of the University’s newest residence hall, Gibbons House.

About 200 members of the University and local community dodged raindrops before a downpour to attend the ceremony, held on the ground floor of the five-story dorm on Alderman Road that will officially open its doors to some 200 first-year students in August.

Remarking that it was his last official act as rector of the Board of Visitors, George Keith Martin – the first African-American person to hold that position – said of the Gibbons: “Their lives are examples of the power of the human spirit to overcome adversity. Slavery did not keep them from learning to read. With the freedom that emancipation brought, they sought out and pursed professional employment opportunities and continued their education.”

Isabella became a teacher at the Freedman’s School – now the Jefferson School – and William became a minister at Charlottesville’s oldest black church, First Baptist, and several years later the Zion Baptist Church in Washington, D.C. When he died in June 1886, 10,000 mourners attended his funeral, the Washington Post reported in a front-page story.

Martin recounted several details that have come to light about the Gibbons: “They were two determined, resourceful individuals; both learned to read even though it was illegal for slaves to do so. It has been recorded that William learned to read by observing and listening to the students at the University.

“Reading was important enough to Isabella that she taught her children to read. Their daughter Bella recalled that she could not have learned to read and write, ‘unless my mother taught me secretly.’”

The contributions of enslaved laborers in the making and running of the University are coming out in the open as the work of the President’s Commission on Slavery and the University, convened almost two years ago, continues.

The naming of Gibbons House is “one part of a broad, ongoing effort at U.Va.” to investigate and propose ways to recognize the role of slavery in the University’s history, U.Va. President Teresa A. Sullivan said at the dedication.

The commission’s co-chairs – Dr. Marcus Martin, vice president and chief officer for diversity and equity, and Associate Professor of History Kirt von Daacke – discussed the commission’s work as it involves related groups on Grounds and in the community, from Thomas Jefferson’s Monticello to the University and Community Action for Racial Equity, and as the commission prepares several educational activities.

“This building represents an outstanding opportunity to educate many students and their families, staff and faculty and visitors about slavery and the contributions of the enslaved at the University for years to come,” Martin said.

He credited the research of independent scholar Gayle Schulman and U.Va. Ph.D. alumnus Scott Nesbit for bringing the Gibbons’ story to light and providing the material that ultimately made the dedication possible.

In addition to naming the residence hall after the Gibbons, the building’s public spaces will display photos of Isabella and William, interpretive panels on the walls and a plaque about the Gibbons, specially designed to highlight their lives, which was unveiled at the ceremony.

Although some of the couple’s descendants have been identified, great-great-granddaughter Carol Carter wasn’t able to attend this event. She and her family plan to visit at a future date, Martin said.

Other commission activities being planned for the coming academic year are a new spring semester course about slave history at U.Va. and a summer research program for high school students, Von Daacke said. The creation of a heritage trail and an app for taking the tour are also in the works.

The commission’s previous activities have included hiring Kelley Deetz, a historical archaeologist to research U.Va.’s slave history and other options for making it known to the public; hosting a national conference last fall, along with the commemoration of a slave graveyard adjacent to the existing U.Va. cemetery; and meeting with local groups and history organizations who are contributing ideas to the commission.

“We are approaching a major milestone in the University’s history – the bicentennial, which will begin in 2017,” Sullivan said. “To properly and candidly commemorate this historic moment in our history, we must recognize the role of slavery and enslaved persons at the University.”

Monkeypox Is Spreading, But University’s Risk Believed To Be Low END_OF_DOCUMENT_TOKEN_TO_BE_REPLACED

This Alum Is Living His Best Life on the Road, One State at a Time END_OF_DOCUMENT_TOKEN_TO_BE_REPLACED

These Giant Wind Turbines, Inspired by Palm Trees, May Be the Future of Renewable Energy END_OF_DOCUMENT_TOKEN_TO_BE_REPLACED