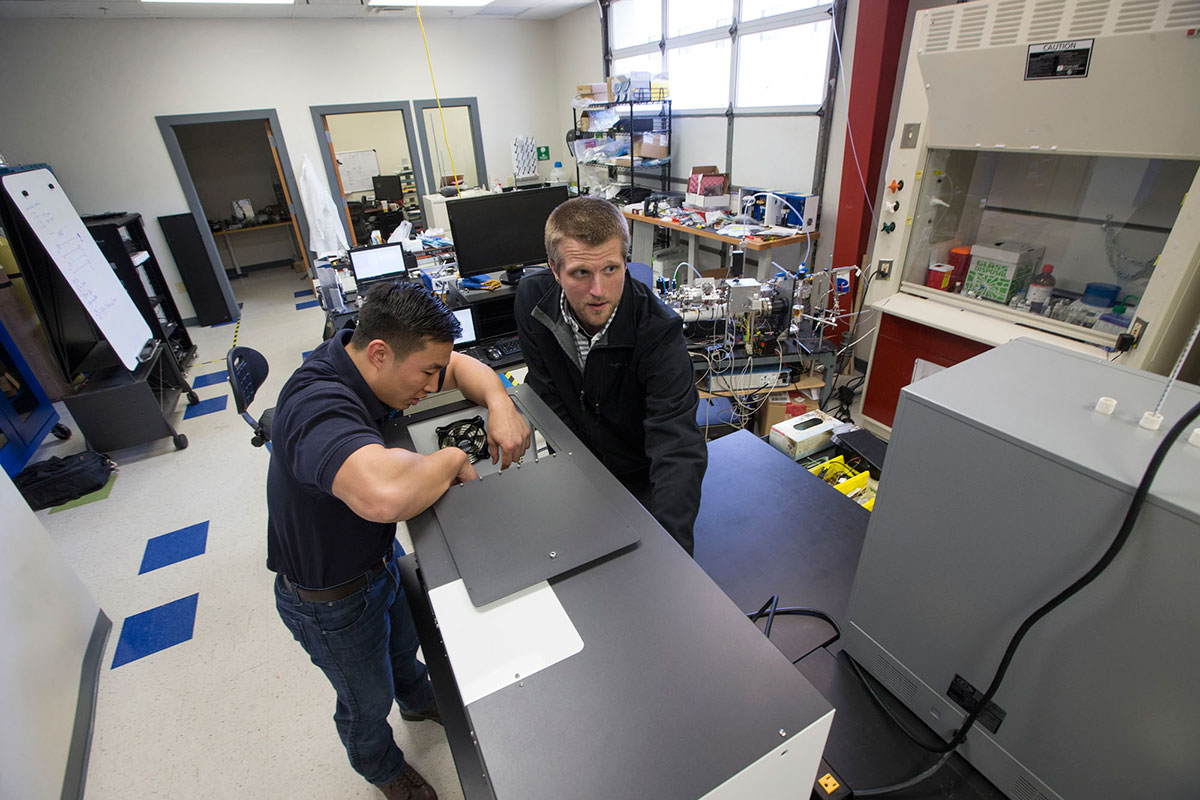 There are people in the world – chemical engineers, astronomers, national defense scientists investigating an explosion – who need to know just what something is made of, down to the molecular level.

Technology developed at the University of Virginia is speeding that process from days or weeks to just minutes.

Brooks Pate, UVA’s William R. Kenan Jr. Professor of Chemistry, is the architect behind the emerging technology that is changing the industry standard in chemical analysis. His advances in spectroscopy are opening new doors in everything from pharmaceutical research to the study of interstellar matter.

Spectroscopy is used to study matter by recording the spectrum of light it emits or absorbs when hit with electromagnetic radiation. In the early 2000s, Pate and his research team developed a new method of spectroscopy that allows digital control over the process and thus a much more rapid rate of molecular analysis. Pate had received a MacArthur Fellowship in 2001; the so-called “genius grant” gave him $500,000 over five years. 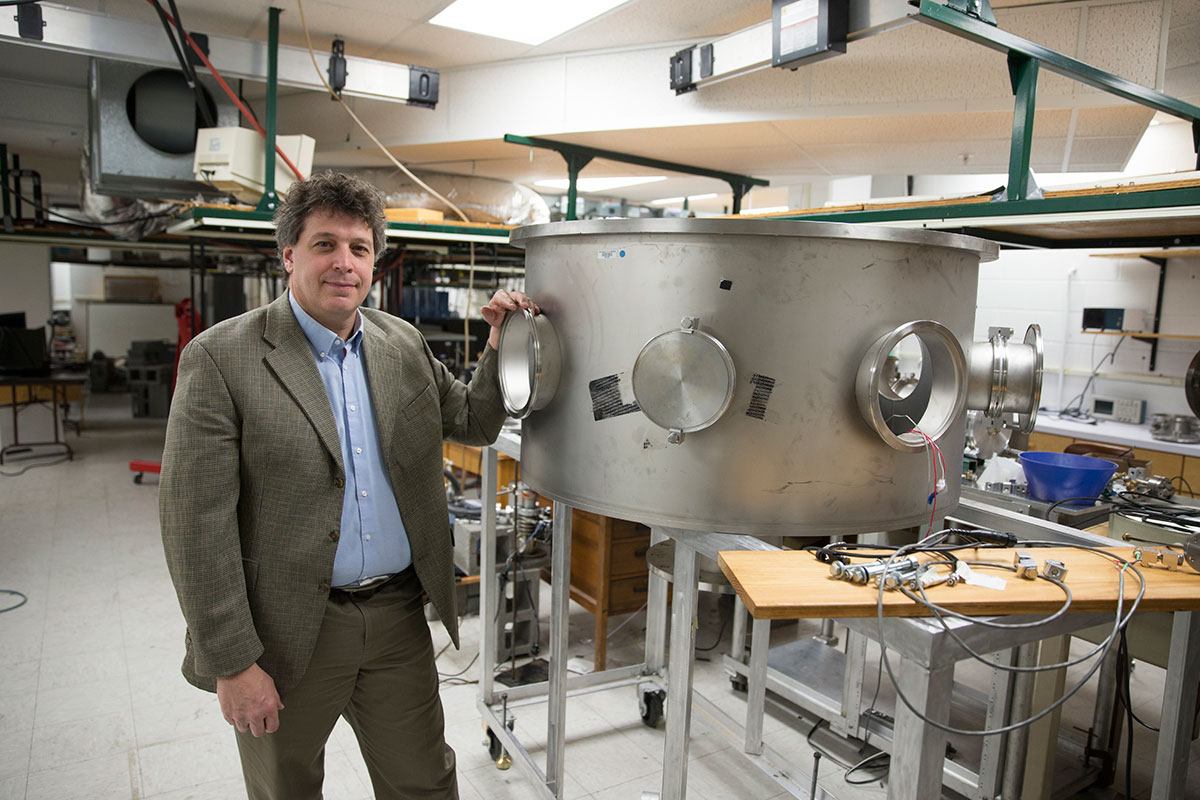 The UVA Licensing and Ventures Group later helped Pate license his technique – called FT-MRR, short for “Fourier transform molecular rotational resonance” – to a Charlottesville start-up, BrightSpec. With a number of UVA alumni at the helm, BrightSpec has spent the last three years adapting FT-MRR for commercial use and sold its first three spectrometers last fall.

“Since BrightSpec began, the applications have been devoted to trace analysis of chemicals, detecting small quantities of harmful chemicals in products, and in particular, looking at small amounts of solvents left in pharmaceutical products that are harmful to you if you continue to ingest them over time,” Pate said.

BrightSpec’s FT-MRR platform allows scientists to run analyses of tiny trace amounts of chemicals in minutes, a measurement process that could take days or weeks with older technologies.

“What this technology has done for molecular rotational spectroscopy is kind of the equivalent of tube televisions finally becoming these flat-screen LCDs,” BrightSpec co-founder and UVA alumnus Brent Harris said. “Rotational spectroscopy was this big bulky analog technique. We turned it into something really advanced – digital, fast and reasonably priced for other competitive instruments. Now there’s this brand-new tool that chemists can use.”

In addition to its ability to quickly identify impurities in pharmaceutical products, the BrightSpec FT-MRR platform is also uniquely suited to perform fast chiral analysis, an important step in determining drug efficacy.

The chirality of a molecule refers to a subtle difference in shape. For example, two chiral glucose molecules are made up of the same number of carbon, hydrogen and oxygen atoms, but they are structured as mirror images of each other rather than exact copies. One is “left-handed” and one is “right-handed.”

Drugs that are composed of molecules arranged in the body’s preferred chiral shape will latch onto internal systems more easily and treat patients more effectively.

Pharmaceutical companies and other interested researchers send their samples to BrightSpec for these types of analyses or purchase their own FT-MRR spectrometer to run in-house tests. 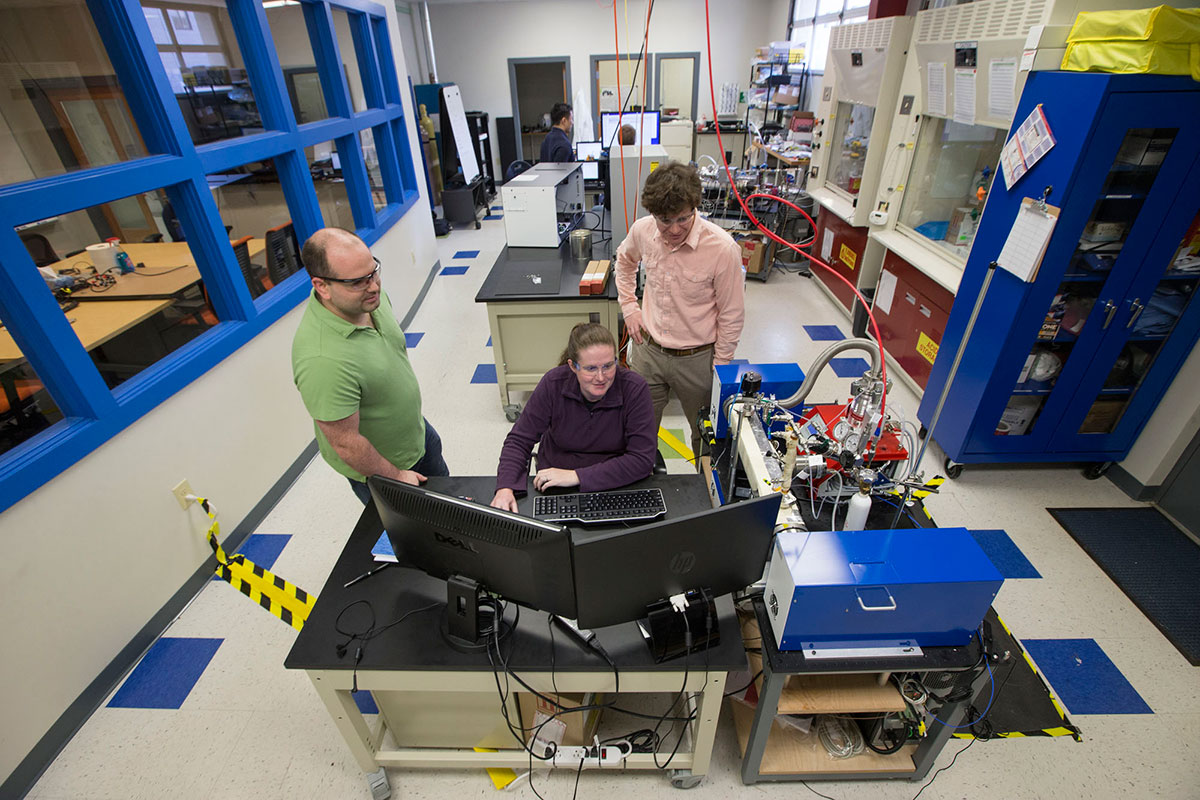 Outside the pharmaceutical industry, BrightSpec’s method of rapid analysis also has applications for energy research, commercial chemical production and astrochemistry – the study of molecules in the star-forming regions of space.

“The first three instruments we sold were to institutional and academic research groups,” BrightSpec co-founder and another UVA alumnus Justin Neill said. “Until a few years ago, if those researchers wanted an instrument with these kinds of capabilities, they’d have to attempt to build one themselves. Now, they have exciting applications that they want to work on and they decided that they could get started faster by buying the instruments from us.”

The first purchasers include the U.S. Department of Energy’s Argonne National Laboratory, the Max Planck Society in Germany and the University of Valladolid in Spain.

As the company grows, the BrightSpec team hopes to continue expanding its reach into different areas of chemical analysis. It has received multiple grants from the United States Army and the National Science Foundation to continue its work in small-business innovation and research.

“The people that we sell to are people who already have everything, all the technology at their disposal and it’s still taking them months to get to an answer of whether their sample is right or wrong,” Harris said. “We’re giving them a technology that helps them innovate on their own research and products faster.”

What Is the ‘4th Side’? END_OF_DOCUMENT_TOKEN_TO_BE_REPLACED