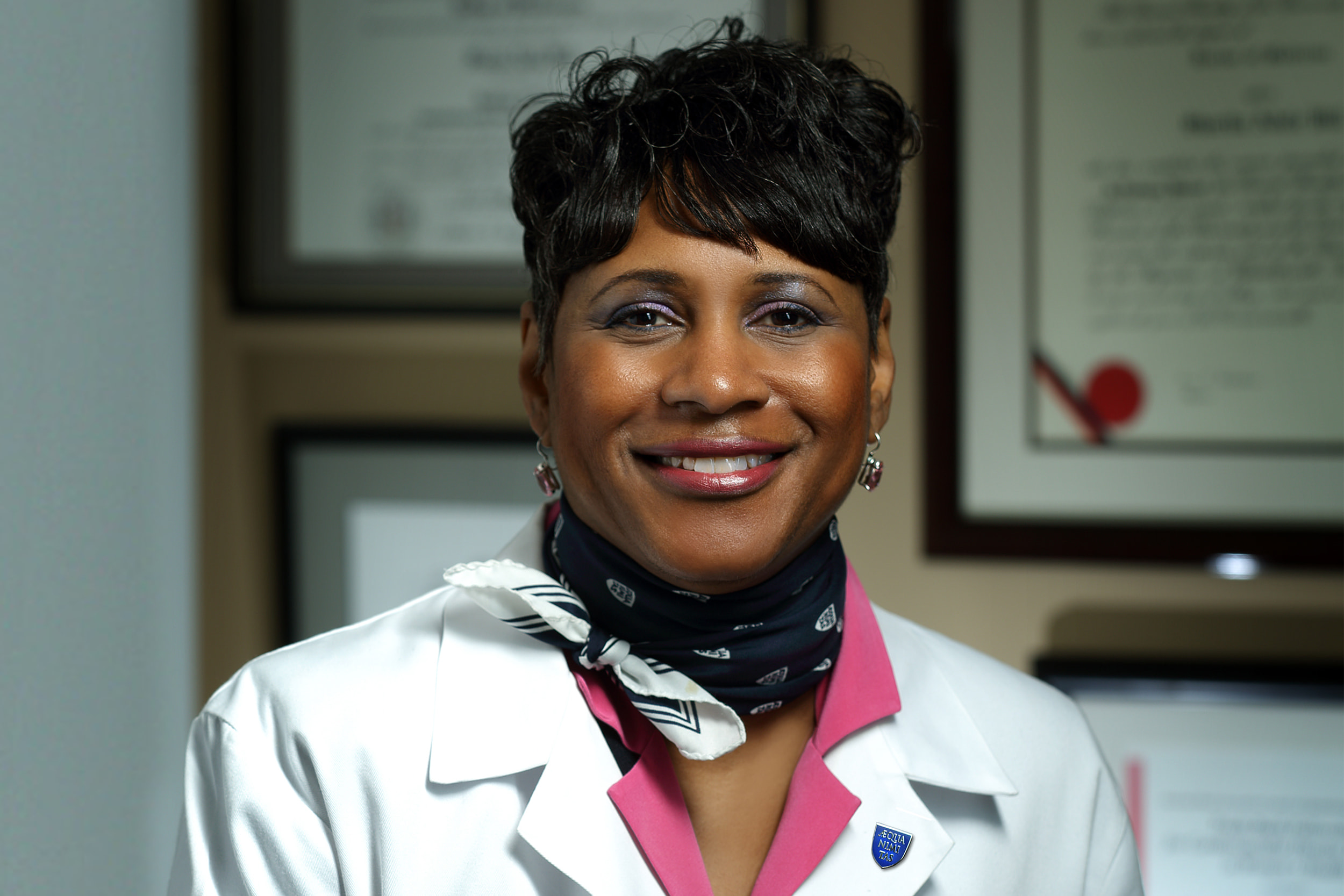 From her early days as a medical student at the University of Virginia in the 1990s, Sherita Hill Golden distinguished herself in her academic work and leadership. Now a physician and an endowed professor at Johns Hopkins University School of Medicine, she has become a well-known expert in diabetes research and care, with a focus on health disparities and community needs.

Recognizing the impact of her career, the UVA Maxine Platzer Lynn Women’s Center has selected Golden as the University’s 2019 Distinguished Alumna.

“The combination of Dr. Golden’s professional expertise, outstanding accomplishments and inspirational leadership exemplify the qualities we seek to recognize with the Distinguished Alumna Award,” Women’s Center Director Abby Palko said. “Her career is a stellar example of the contributions to the greater good which UVA alumnae make with their degrees.”

Golden’s research focuses on understanding and eliminating racial health disparities in preventing and treating diabetes. She has also implemented better policies and interventions to improve the quality of care in the hospital setting for patients with diabetes. Along with her professional focus, she has worked to promote faculty and staff understanding of diversity issues in health care in the larger Baltimore area.

Golden will visit the University April 26 and 27 for the award presentation, and will meet with colleagues, UVA students and local high school and middle school students.

Along with attending the UVA School of Medicine on a full, merit scholarship, Golden was the first African-American student to receive the C. Richard Bowman Scholarship, bestowed annually to one fourth-year medical student based on excellence in performance and professional attitude during the third-year clinical clerkships. She was also recognized as one of the “Ten Most Outstanding Medical Students” by the National Institute of Diabetes, Digestive and Kidney Diseases, and the American Medical Women’s Association chose her for the Janet M. Glasgow Memorial Achievement Award. In addition, as a student, she was elected to Alpha Omega Alpha Honor Medical Society.

These awards “were only a portent of things to come,” wrote UVA School of Medicine Dean Dr. David Wilkes, who nominated Golden for the Distinguished Alumna Award. Wilkes, the national director of the Robert Wood Johnson Foundation’s Harold Amos Medical Faculty Development Program, first met Golden when she participated in the program, one of the longest-running minority faculty development programs in the country.

Golden described her time as a UVA medical student as “four of the most formative years of my life. I developed a passion for three areas that would guide the rest of my career: one, diabetes and endocrinology; two, clinical research; and three, community engagement. Throughout the past 25 years since leaving my beloved UVA, these tenets have kept me on a focused trajectory to care for those in need, both inside and outside of the medical setting.”

After graduating from UVA’s School of Medicine in 1994, Golden pursued her internship and residency at Johns Hopkins Hospital; completed a fellowship there in endocrinology, diabetes and metabolism; and earned a Master of Health Sciences degree in clinical epidemiology from the Johns Hopkins Bloomberg School of Public Health in 2000.

“As a fellow endocrinologist, it has been a pleasure for me to watch Dr. Golden’s career blossom,” Dr. Robert Carey, former dean of UVA’s Medical School, wrote in supporting her nomination.

Golden is now the Hugh P. McCormick Family Professor of Endocrinology and Metabolism and executive vice chair of the Department of Medicine at Johns Hopkins. She holds joint appointments in the Welch Center for Prevention, Epidemiology, and Clinical Research; the Department of Epidemiology at the Johns Hopkins Bloomberg School of Public Health; and the Armstrong Institute for Patient Safety and Quality. She also directs the Johns Hopkins Hospital Inpatient Glucose Management Program.

As principal investigator of the landmark Diabetes Prevention Program Outcome Study at Johns Hopkins, she has been part of a large, multi-center team showing that diet and exercise interventions for weight loss lowered the risk of developing diabetes. Her research focuses on understanding and eliminating racial health disparities in preventing and treating diabetes. She has also implemented better policies and interventions to improve quality of care for patients with diabetes in the hospital setting.

She was the first scientist to demonstrate that the relationship between depression and diabetes was bi-directional, Wilkes wrote. “Not only did having depression increase a person’s risk for developing diabetes, but also having diabetes predicted the risk of developing depression. This work had far-reaching implications – patients with depression need to be evaluated for diabetes, and treatment for depression may help to prevent diabetes,” he said.

“Because of this work, Dr. Golden was asked to co-chair the 2012 International Conference on Depression and Diabetes, sponsored by the NIH, which resulted in published recommendations to advance research and clinical care delivery approaches in patients with co-morbid depression and diabetes.”

Her nominators also described her passion for working to eliminate health disparities. Appointed by Carey, she chaired the Endocrine Society’s first Scientific Statement on Health Disparities in Endocrine Disorders. She also served as Training Core Director of the NIH-funded Hopkins Center to Eliminate Cardiovascular Health Disparities.

Dr. Mark E. Anderson, physician-in-chief of Johns Hopkins Hospital and director of the Department of Medicine, enumerated a long list of awards she has received at Johns Hopkins, including being named a “Hopkins Hero” – “an honor that acknowledges individuals who serve as a shining example of the core values of the School of Medicine through their work and accomplishments,” he said.

Golden was the co-recipient of the 2017 Walter Reed Distinguished Achievement Award from UVA’s School of Medicine, Medical Alumni Association and Medical School Foundation. This award recognizes professional accomplishment, outstanding innovation and exemplary leadership in medicine. One year later, Golden was named a winner of the 17th Annual Women Worth Watching Awards from the Profiles in Diversity Journal, one of 132 winners across the globe recognized as an executive leading the way to excellence in the workplace and the world.

Golden has taken her research and knowledge beyond the hospital and lab settings. She regularly shares her work with the community and church-based organizations in Baltimore, speaking about the importance of recognizing and treating depression, as well as preventing and treating diabetes.

Wilkes and other nominators also described how she drew on her leadership to develop programs reaching out to the community in response to the unrest in Baltimore following the death of Freddie Gray while in police custody in 2015.

She organized a department-wide “Journeys in Medicine” lecture series that expanded into a civic engagement initiative. This program aims to raise awareness of health inequities and give faculty and staff members opportunities to help improve health equity; to make delivery of patient-centered care more culturally, linguistically and spiritually competent; and to create a more diverse and inclusive workforce.

“One of her most important contributions has been using her leadership platform to facilitate culture change and dialogue among faculty and staff of diverse backgrounds and perspectives in our department,” Anderson said.

Golden shared this work at a symposium at the Association of Professors in Medicine meeting and in articles in Academic Medicine and Proceedings of the Clinical and Climatological Association in 2018.

In addition to being an effective researcher and prolific author, Golden continues to be an active mentor and a dedicated clinician with diabetes patients. A community advocate for the Maryland Chapter of the American Diabetes Association, in 2015 she was recognized with an American Diabetes Association “Diabetes Hero Award” and was the top fundraiser for the Baltimore ADA Walk.

The breadth and depth of her career make her “an ideal candidate for UVA’s Distinguished Alumna Award,” Wilkes pointed out. “Dr. Golden has demonstrated excellence, leadership and an extraordinary commitment to her field and she has used her talents as a positive force for change.”

For information about the award events, contact the Women’s Center.

What’s Next for UVA’s Class of 2022? END_OF_DOCUMENT_TOKEN_TO_BE_REPLACED