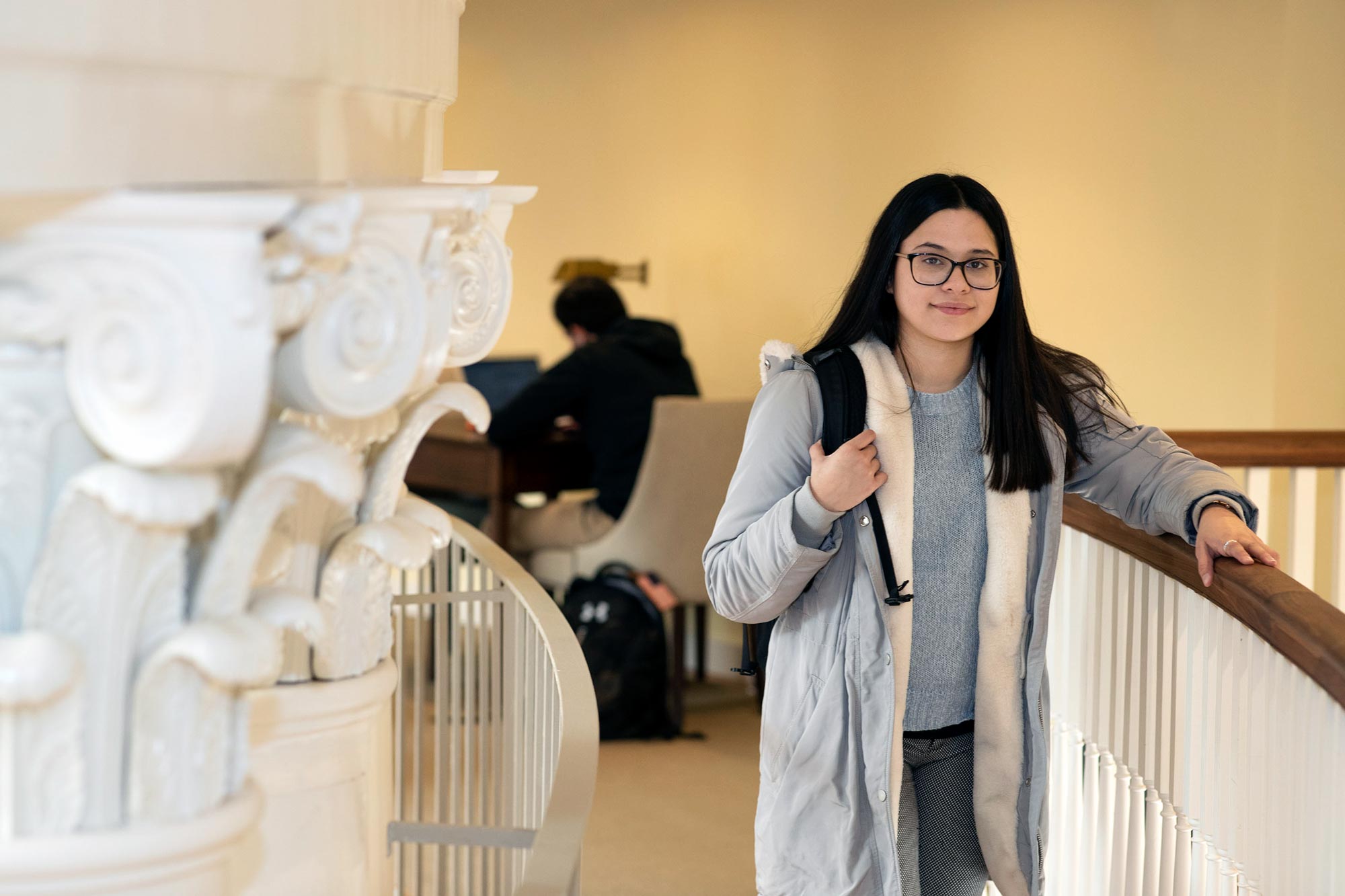 As a self-described “first-generation, low-income student,” Astrid Escobar is studying how to pull others along behind her. (Photo by Dan Addison, University Communications)

Astrid Escobar wants to solve the problems that affected her childhood experiences in the U.S. public education system.

The University of Virginia second-year student became interested in researching educational inequality based on her experiences attending schools in her hometown of Houston. Her research interests developed as she reflected upon her mother’s experiences interacting with the local school system.

“I am … a first-generation, low-income student and I am a Latina doing research, so this is something I am very personally connected to and passionate about,” Escobar said. “Growing up, it was very difficult for my mom, who is from Honduras, to connect with and understand the education system and, in turn, the education system had few tools for my mom to be able to support me and be involved in my education.”

With support from a Harrison Undergraduate Research Grant, Escobar – who has not yet declared a major in the College of Arts & Sciences – is researching Latino parental involvement in their children’s education in kindergarten through second grade.

Reviewing educational literature about Latino families, Escobar said she found untrue assumptions, primarily suggestions that Latino families do not care about their children’s education. She said in her own case, while her mother did not have money for tutors or a strong command of English, she supported her daughter “morally,” meaning that parents push their children to attend and do better in school to be able to get a steady job.

In her research, Escobar interviews Latino families in Virginia to see how they interact with their children and with the school district to determine where the families feel stymied by cultural and language difficulties.

Escobar said she was not looking for concrete answers.

“What I want is to diversify the literature so that basically Latinx students in the educational system could be understood better and met halfway,” she said. “The literature makes Latinx families look a certain way, as though education is not a priority, instead of understanding where they are coming from. In my small sample, I have found that Latinx families have to make up solutions when the school is not meeting their needs.”

In her research, Escobar has found Latino families have developed workarounds for the barriers they encounter.

“One of the things that has surprised me is just how many tools Latinx families have learned to use to better understand and support their children’s education,” she said. “I have had parents tell me they use Google Translate with their children to understand the homework better. Or they use an application that tells them what their child does every day in school and this keeps them connected with teachers.”

Escobar said that culturally, Latino families are reluctant to question teachers’ authority. Because of this, Escobar said she seeks to gain the trust of the parents to whom she is talking.

“I am coming in as a third party,” she said. “I want to make them comfortable and I tell them I have little do with the school, so there won’t be any consequences for them saying they need more translation or that they could be better supported.”

Raised by a single mother from Honduras, Escobar sees her family members as role models. She is the youngest of three siblings, and her oldest sister, still living in Honduras, runs her own business. Her middle sister is a licensed radiology technician, with ambitions of going to medical school.

“I think my sisters are so resilient,” she said.

Escobar is conducting her research under the mentorship of Tonya Moon, a principal investigator for the National Research Center on the Gifted and Talented and a professor in the Curry School of Education and Human Development’s Department of Leadership, Foundations and Policy. Escobar is conducting her research in Virginia because Moon was already collecting her own data there.

Moon praised Escobar for her courage and spirit and noted that she had demonstrated independence in her own learning about research.

“Aside from her intellectual curiosity and academic motivation, she has shown a willingness to be team player and to learn new skills,” Moon said. “In our research lab, there are two faculty, one post-doctoral student and four doctoral students, and Astrid attends and actively engages in project meetings, accepts constructive feedback and guidance with an attitude of ‘I’m here to learn.’ Although quiet, she is a hard-working, smart young woman who is a leader in the making and she is a terrific addition to both our research team and the broader UVA community.”

Escobar will present her findings at a symposium on Grounds in April and she and Moon have talked about publishing some of it in an educational journal.

Escobar is part of the Undergraduate Student Opportunities in Academic Research network, serves on the executive board of Central American for Empowerment and is a member of the Peer Mentorship Program.

She’s tried out several disciplines since coming to UVA. She first thought she wanted to be an economist and then she explored business. But her mind kept returning to the issue of education. She does not want to be a teacher, she said; instead, she wants to help shape educational policy.

But while her long-term goals are to shape educational policy, Escobar wants her work to have a more immediate impact. She is also thinking about returning to her school district in Houston.

What’s the True Story of Brooks Hall? This Architectural Historian Has the Answer END_OF_DOCUMENT_TOKEN_TO_BE_REPLACED

At UVA, There Is a Club for Everyone END_OF_DOCUMENT_TOKEN_TO_BE_REPLACED