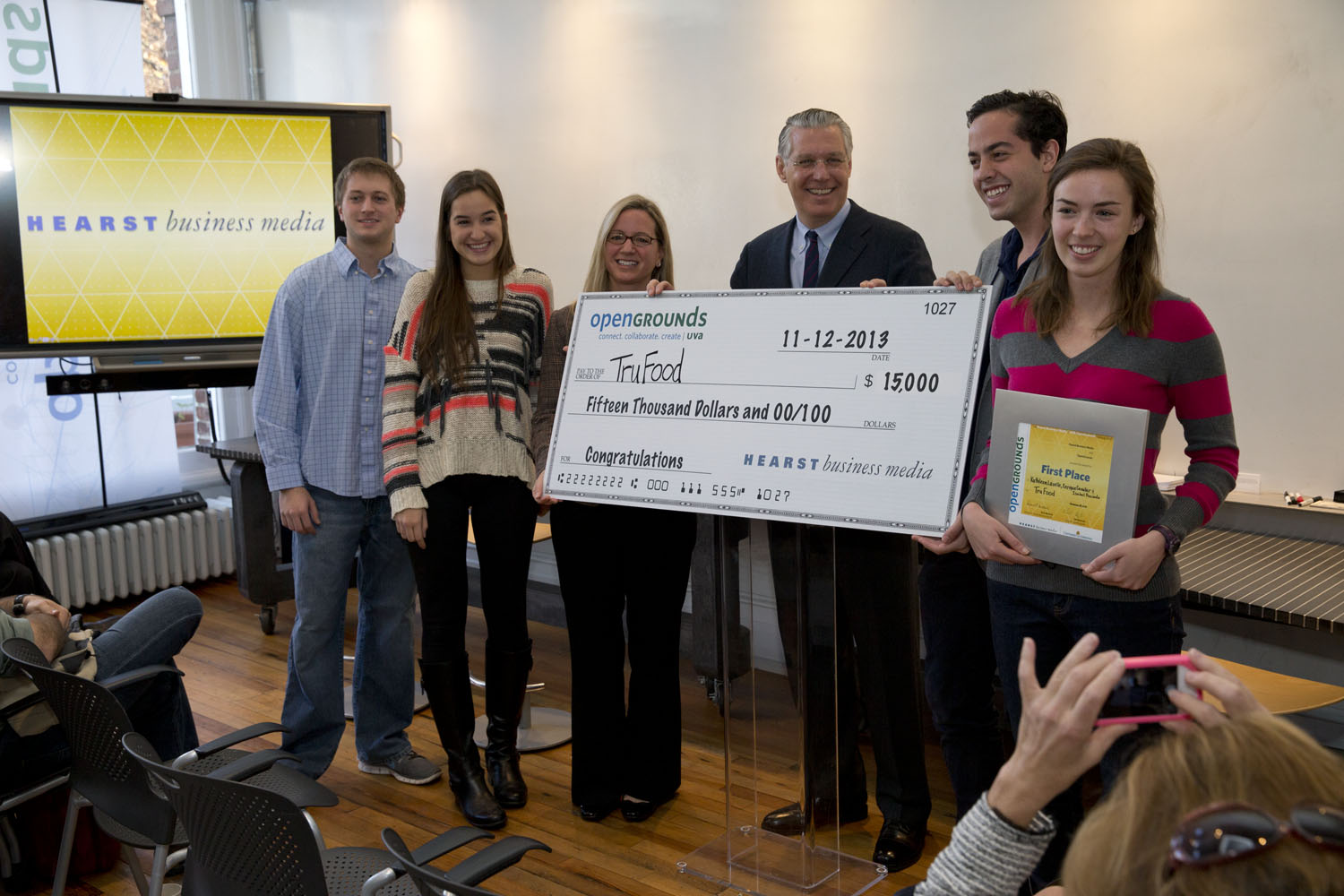 Increases in the cost of care and the prevalence of preventable chronic conditions are only a few of the complexities of health and health care in the United States today. These challenges present an opportunity for the University of Virginia’s most innovative students to develop new approaches aimed at lowering health care costs and improving overall health.

OpenGrounds and Hearst Business Media on Tuesday announced the winners of the latest OpenGrounds Challenge, which asked the University’s students to imagine ways to help people make better choices about their own health. Students competed for first-, second- and third-place prizes of $15,000, $7,000 and $3,000, respectively, awarded to the most innovative ideas to build a healthier society.

Rich Malloch, president and group head of Hearst Business Media, revealed the winners during an awards ceremony at the OpenGrounds Corner Studio. “These students brought their best ideas and most creative thinking,” he said. “It is our hope that these awards will encourage their pursuit of solutions to real-world challenges, such as those facing our health care system, as they embark upon their careers.”

The first-place check went to “TruFood,” an app that would provide detailed information about food at the point-of-sale, proposed by Kathleen Lavelle, Isabel Preciao and Eneique Cavalier, a team of third- and fourth-year students from the School of Architecture. The judges emphasized the potential social impact of this app, with its simplified, single score summarizing net nutritional value at the point of decision, helping people to make better choices about the foods they purchase.

Jacob Manley, Benjamin Nowak and Kevin McVey, an interdisciplinary team of fourth-year students, took the second prize for “Sportakus,” a role-playing game that puts the player in charge of the gladiator, Sportakus, and offers in-game rewards for meeting fitness goals.

Third place went to Megan Watson, Sydna Mundley, Todd Stovall and Chris Wallace, also from the Architecture School, for their concept, “MyPlace,” which would provide holistic rankings of the health of a community based on nine different factors.

The judges also awarded two honorable mentions. First-year student Mary Kate Skalitsky was recognized for her concept, “Playground Town,” a pedometer-based computer game. Third-year student Katie Bailey was commended for her presentation skills as well as her idea, “The Water Gap,” which would help individuals monitor their water consumption and become more aware of water usage as a global health issue. Both young women were offered paid summer internships with Hearst.

“This OpenGrounds Challenge presented a wide array of new approaches to health care challenges we face,” said Bill Sherman, founding director of U.Va.’s OpenGrounds. “We received many high-quality submissions that demonstrate the culture of innovation that is developing at U.Va. The partnership with Hearst has opened doors for students and demonstrates the power of these new collaborations between the University and forward-thinking partners.”

Ninety-three students on 71 teams competed for the prize money. Drawn from eight schools and 36 departments, the students ranged from first-years to post-docs. Their ideas were reviewed by judges from both U.Va. and Hearst, including business-development leaders and health care professionals.