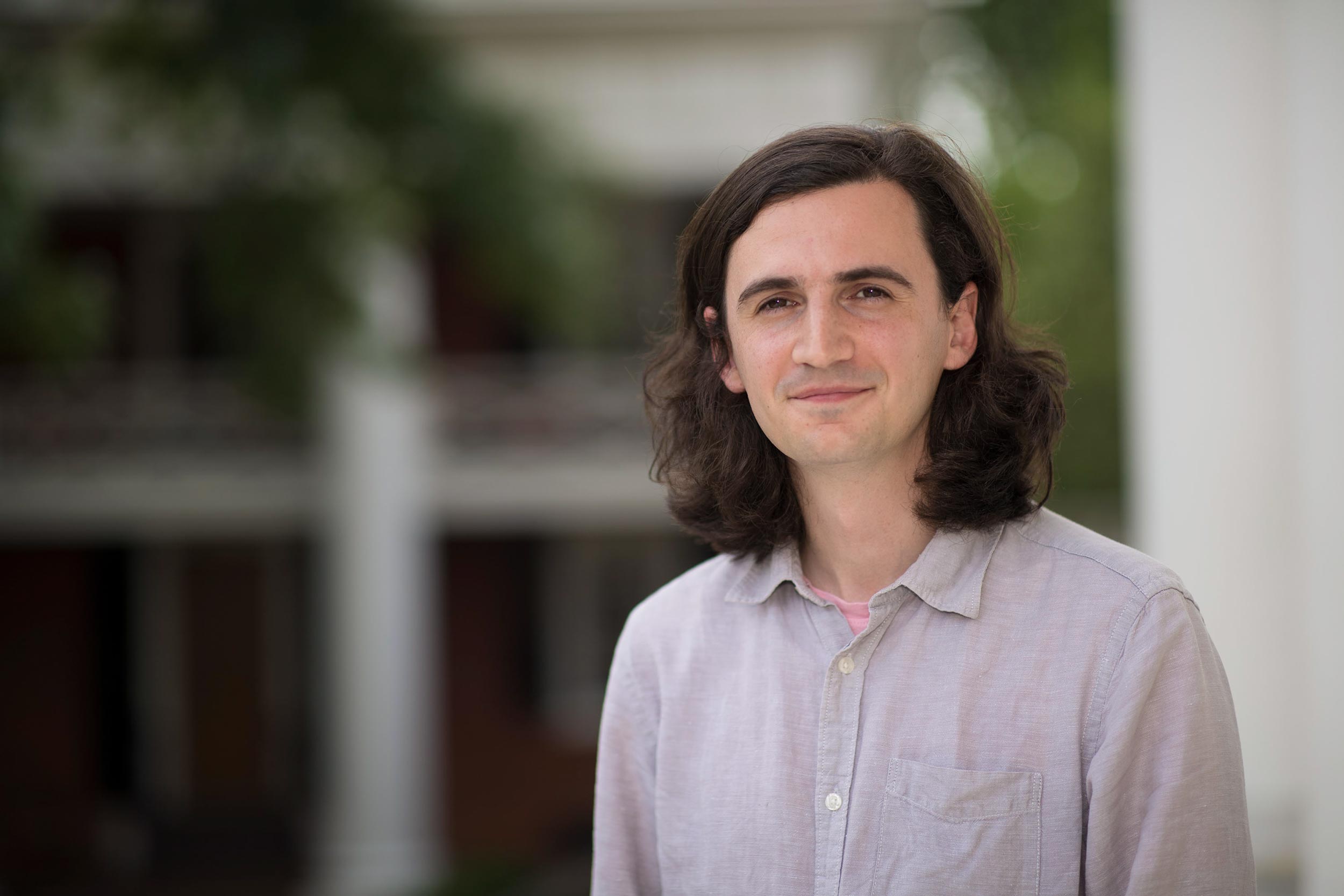 Propelled by a quiet curiosity, a roaming imagination and a sharp eye for the unnoticed – whether ordinary or unusual – Piers Gelly has steadily pursued his interests in arts and crafts and in ways of sharing them.

During his junior year at Wesleyan University, he received a grant to research several historical re-creation projects in Europe, including a castle in France being constructed using only 13th-century technology. (Gelly worked there for a week, wearing a burlap tunic and mixing mortar with a long stick.) He has produced a video series about artisans, called “The Minds of Makers,” as well as podcasts about a range of topics, from 3-D printing to the history of pockets.

Concentrating on creative writing for the past three years, he received his M.F.A. in fiction writing from the University of Virginia on May 18 and just won the Creative Writing Program’s prestigious 2019 Henfield Short Story Prize, which includes a $10,000 award.

Although Gelly took a few creative writing classes as an undergraduate, he focused on studio art, submitting a group of paintings for his thesis. It wasn’t until the year after, as a postgraduate Ford Fellow at Wesleyan, when he took a fiction writing workshop with novelist Salvatore Scibona, that he decided to pursue an M.F.A. in writing. 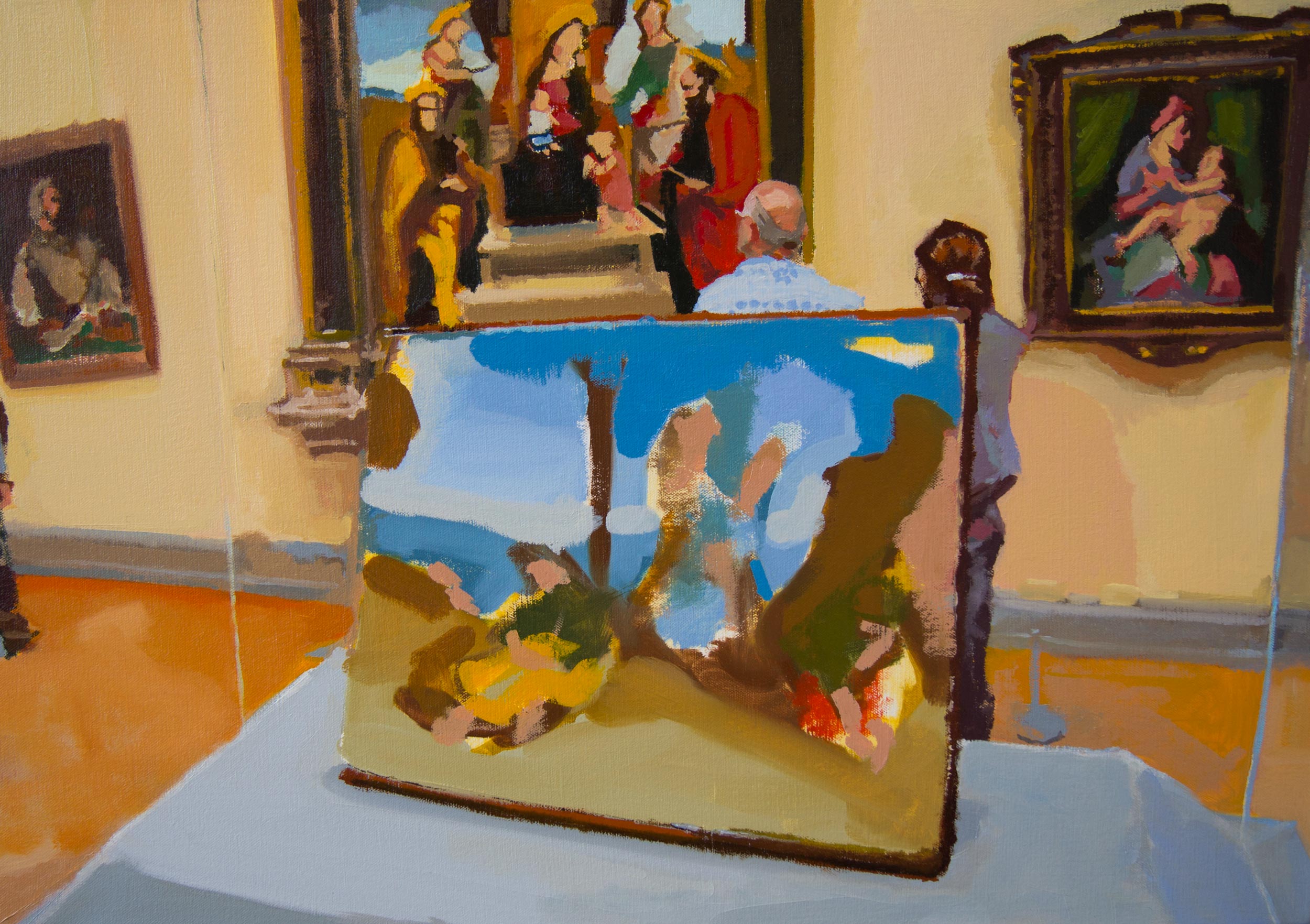 “It blew my mind,” Gelly said. “He took fiction writing as seriously as I wanted to. I’m not sure I’d be here without having taken his class. I didn’t know about M.F.A. programs before then.”

Now he says having had these three years for writing as a Henry Hoyns Fellow at UVA has been incredible and changed his life (again).

“To be given this chance and this time – I’m so grateful,” he said, “and for the vote of confidence. People in the program are doing great work.”

Gelly tries to write for three hours every morning, he said. He has written stories about suburban teenagers vandalizing a school gym and about a truck carrying bee colonies that overturns – told from the bees’ perspective; and a nonfiction podcast about a German artist who makes corpses everlasting art by injecting them with plastic.

He worked on several drafts of his first novel while in the M.F.A. program and will spend part of another year in Charlottesville revising it, partly thanks to the Henfield prize money.

UVA English professor Chris Tilghman, one of his fiction workshop teachers, praised Gelly as being a real artist and “that rarest and most lovely combination: a true intellectual with a very big heart. He never looks down on his characters even when they misbehave; he gives them the benefit of the doubt, because that’s what we are called to do in our real lives. His work is atmospheric, fun, mournful when it needs to be, but full of humor.

“We believe in all our M.F.A. students, but it’s a pleasure, in this annual prize, to pick out one to praise and admire,” Tilghman said.

Gelly’s winning short story, “Sophomores,” is actually part of the novel, he said, and features the afore-mentioned teens. The work-in-progress is about a dying experimental arts college in Wisconsin. The oldest of three brothers, Gelly grew up in Milwaukee. This story is based on an actual place his aunt told him about: Black Mountain College in North Carolina, which was open from 1933 to 1957.

“I felt compelled by the story,” Gelly said.

Through the Joseph F. McCrindle Foundation, UVA’s M.F.A. program is one of five programs since 2011 to offer the annual $10,000 Henfield Prize in fiction writing to one of its graduate students in creative writing. An outside judge, unknown to the students and different each year, selects the winner based on unpublished manuscripts submitted anonymously.

This year’s judge, Helen Schulman, who writes fiction, nonfiction and screenplays, noted the “very high caliber” of all of the submitted stories. Schulman’s most recent novel, “This Beautiful Life,” was a New York Times bestseller. A professor of writing and fiction, she chairs the M.F.A. program at The New School in New York City.

“I just loved [“Sophomores”] for its cool ironic wisdom and its perfect embodiment of adolescent knowingness and innocence. Stanley is such a smart and stuck character – a typical adolescent in a small, cold town, but with such a distinct sense of humor and such a wealth of deep emotion buried inside his fragile shell. The one-way conversation with his mother in the center of the story is simply hilarious.

“But what won my heart in this sharp, well-written piece are the exchanges between Stanley and Jo, the girl he adores. … For all its native unrest this is a story that enchants and moves the reader. Through these dancing linguistic exercises and a series of delinquent acts, Stanley and Jo connect, which at any age equals bliss.” 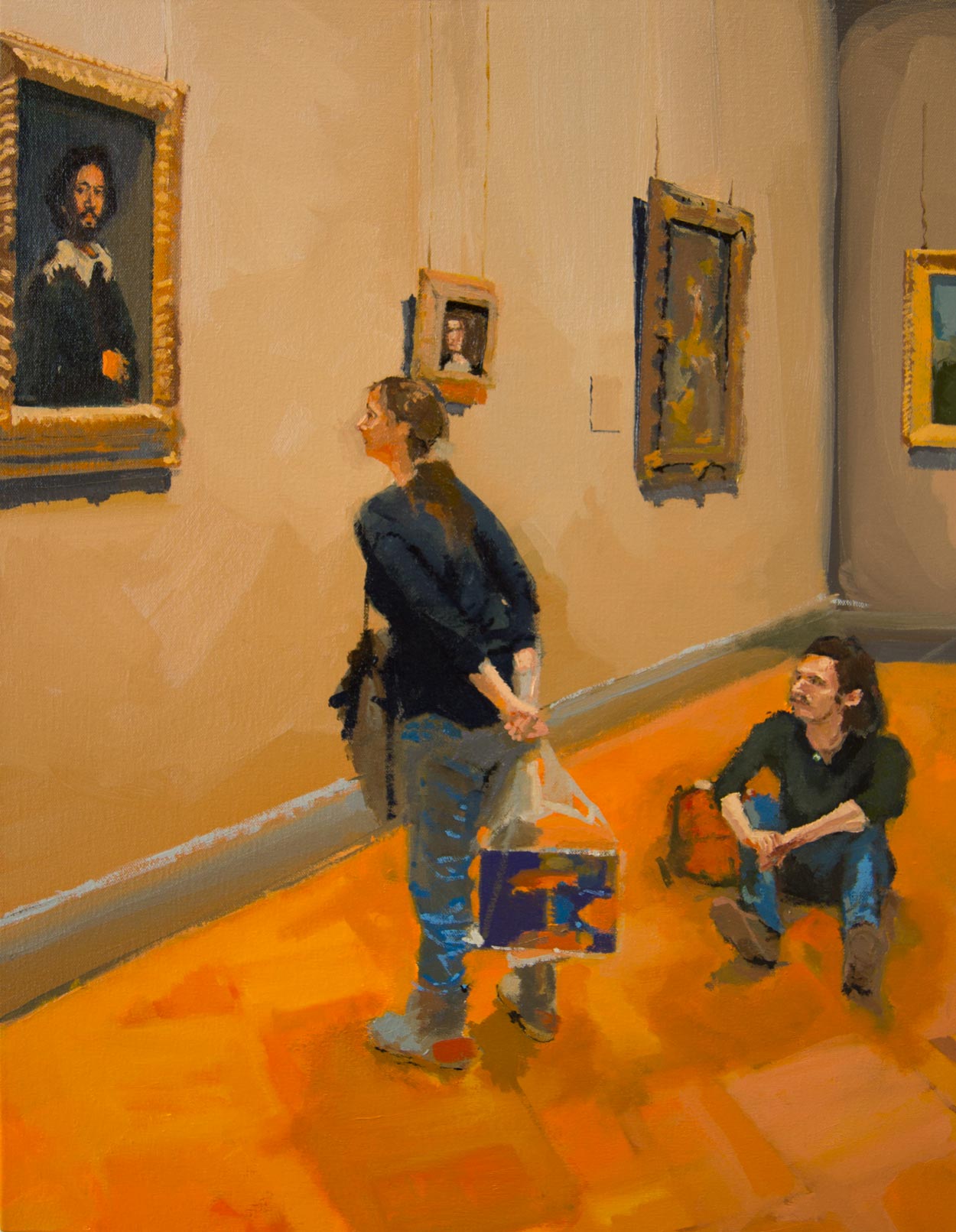 “It is timeless in the way of those wonderful attempts to rethink higher education: the legendary Black Mountain College, and others in the old days, Bard, Marlboro and Reed colleges. It’s topical these days as so many small liberal arts colleges, all over the Midwest and the East Coast, struggle with high costs and declining enrollment. We will miss all of them when they are gone, but Piers Gelly’s novel is a testimony to their best intentions.”

Although Gelly and his two younger brothers were raised in the Midwest, his family has Charlottesville roots: his mother grew up here and his grandparents still live here.

While he remains in town to polish his novel, Gelly also will return to painting, having been accepted into the Incubator Studio at the McGuffey Arts Center. He’ll also look for more podcast work.

Excerpt from “Sophomores” by Piers Gelly

They had written more than they had spoken. She had moved here from Canada in August, and at some point since then, who knew who had started it, they had begun to leave each other letters in their school mailboxes. Their messages had a prancing humor, full of willful misspellings, faux-formal elocutions. They joked often, for some reason, about shooting people in the face, as in, So basically I was riding atop my aunt sally’s domesticated lawnchair through the badlands of Massachusettes when suddenly, to my shock and subsequent pleasure, my aunt was shot in the face, and was immediately incapacitated.

But it was not the words themselves that mattered. The words were merely hollow vessels for the joy they felt in having found each other.

Monkeypox Is Spreading, But University’s Risk Believed To Be Low END_OF_DOCUMENT_TOKEN_TO_BE_REPLACED

This Alum Is Living His Best Life on the Road, One State at a Time END_OF_DOCUMENT_TOKEN_TO_BE_REPLACED

These Giant Wind Turbines, Inspired by Palm Trees, May Be the Future of Renewable Energy END_OF_DOCUMENT_TOKEN_TO_BE_REPLACED