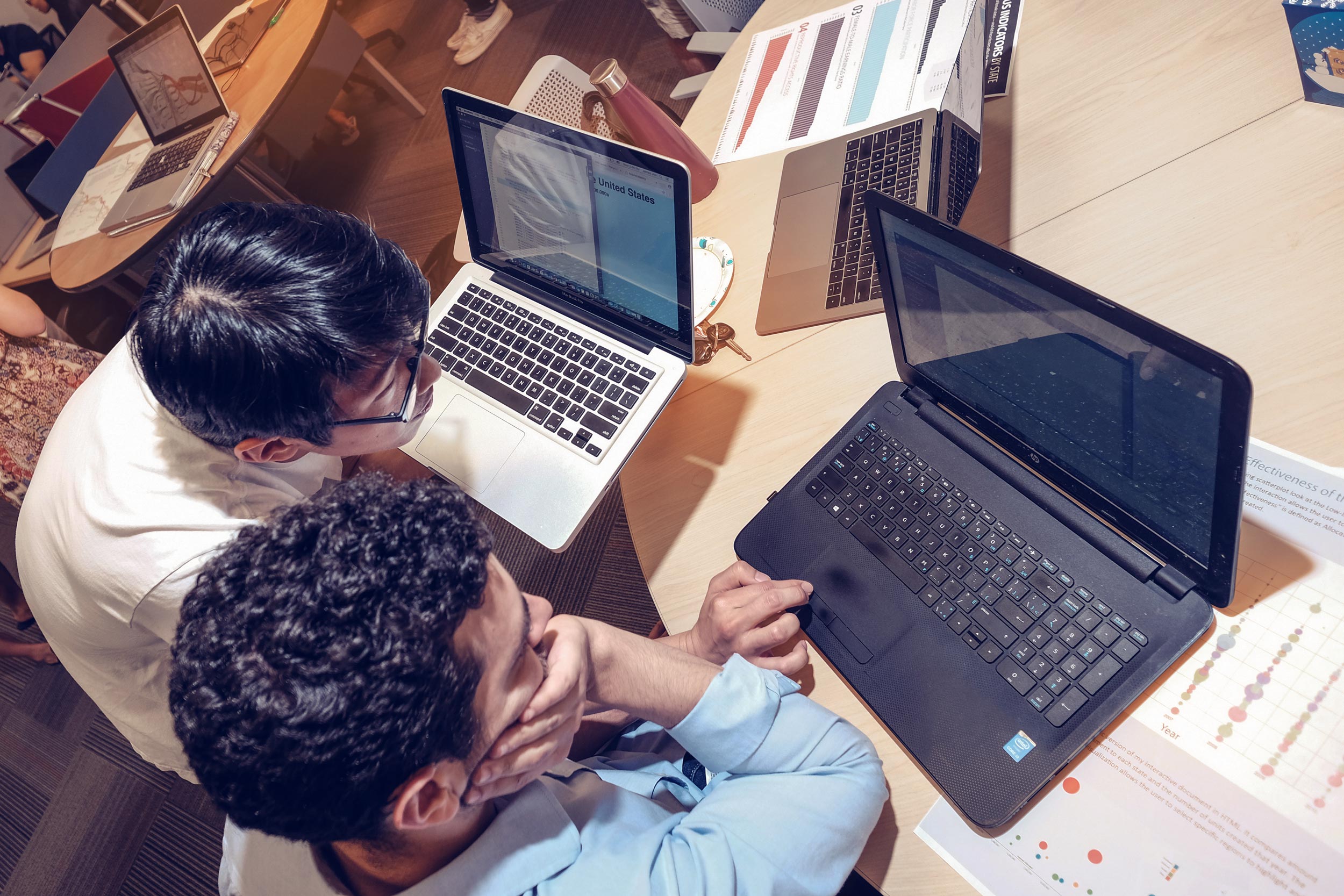 Founded in 2013, the University of Virginia’s Data Science Institute has always had collaboration at the heart of its mission. The institute was built around creating opportunities for students and researchers from across the University in a range of fields, to focus on big-picture problems affecting society.

That is what data science is all about: pulling together data from a wide and ever-growing range of sources, and mining it for insight using new methods and techniques. Applications range from health care to the environment, finance, and everything in between.

By providing fellowships, real-world instruction and seed funding for researchers, the institute has inspired faculty, students and postdoctoral fellows with the opportunity to dream big and uncover data-driven solutions to our most pressing challenges.

“Data science is a team sport that brings together diverse perspectives to address issues that no one discipline could tackle alone. The Data Science Institute facilitates collaboration and brings cutting-edge data science methods and techniques to those teams,” the institute’s director, Phil Bourne, said.

As UVA begins to pursue plans to establish a full School of Data Science, here are five examples of the impactful, cross-disciplinary work being done by its Data Science Institute researchers.

The prevalence of autism has been on the rise since the American Psychiatric Association first classified it as a disorder in 1980. In 2000, about one of every 150 children was diagnosed as being on the autism spectrum; last year, the number was one in 59.

There are many possible reasons for the growing trend, but experts agree that more research is needed to better understand and diagnose the disorder and support the growing number of individuals and families affected.

Toward that end, Don Brown, the Data Science Institute’s founding director and a chaired professor of systems and information engineering in the Department of Engineering Systems and Environment; and Micah Mazurek, associate professor and director of the Supporting Transformative Autism Research project, are working with an interdisciplinary team to build a new system for collecting, integrating and analyzing data from multiple sources.

As part of the Supporting Transformative Autism Research project, funded by a $6.2 million grant from UVA’s Strategic Investment Fund, the team plans to use machine learning and integrated data – the application of algorithms to improve computer analysis as a means for uncovering new insights – to develop personalized therapy approaches for individuals with autism.

“Data science approaches can rapidly uncover new insights into autism and help us translate these discoveries into real-world solutions for individuals and families,” Mazurek said. 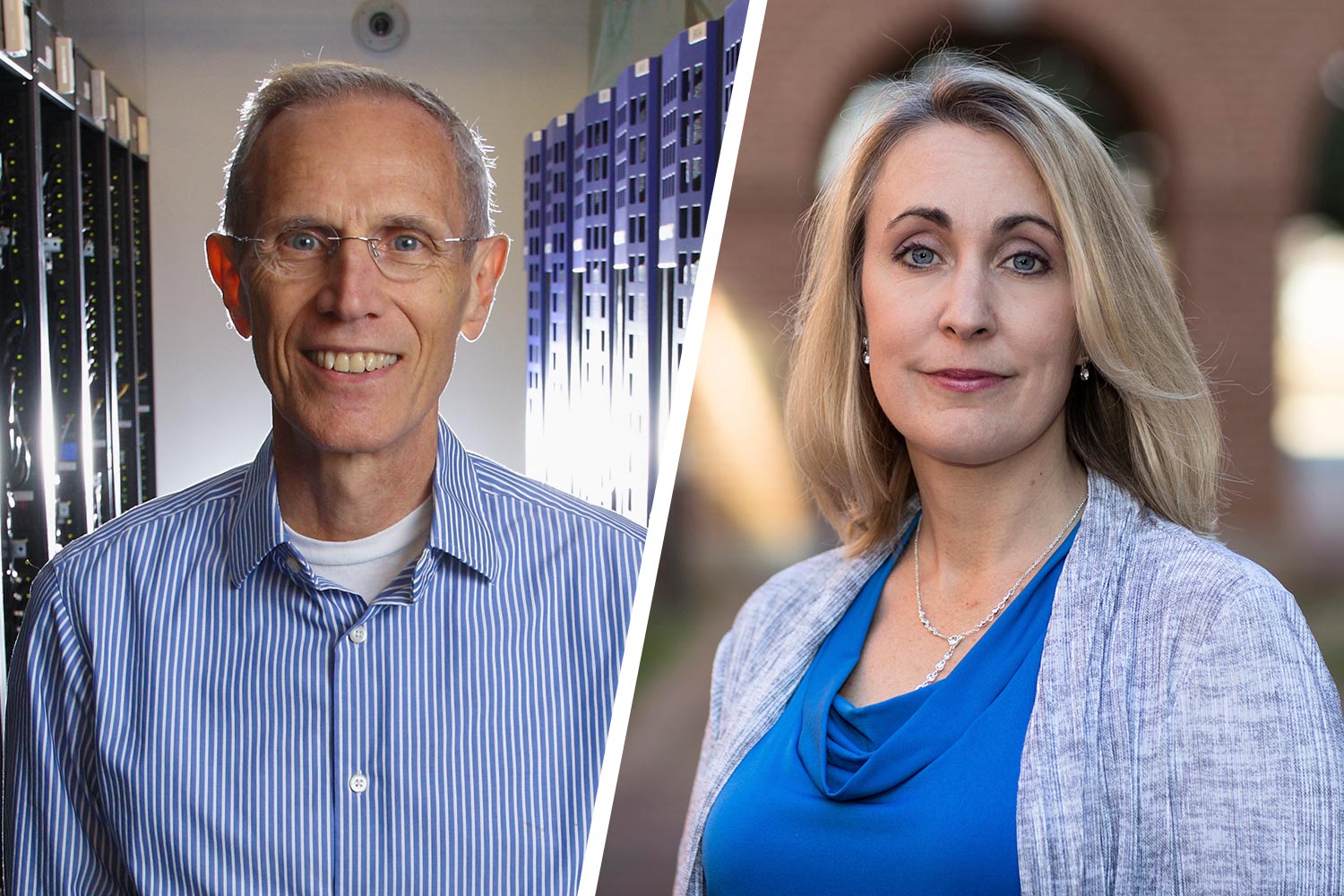 For the past decade, systems engineering students and faculty have worked with local and regional criminal justice agencies in the Charlottesville and Albemarle County area with the goal of enhancing public safety and reducing recidivism. Participating agencies include the regional jail, law enforcement agencies, mental health service providers, advocates for the homeless, probation and parole agencies, and others who are working together to ensure public safety and also address the mental health needs of individuals. 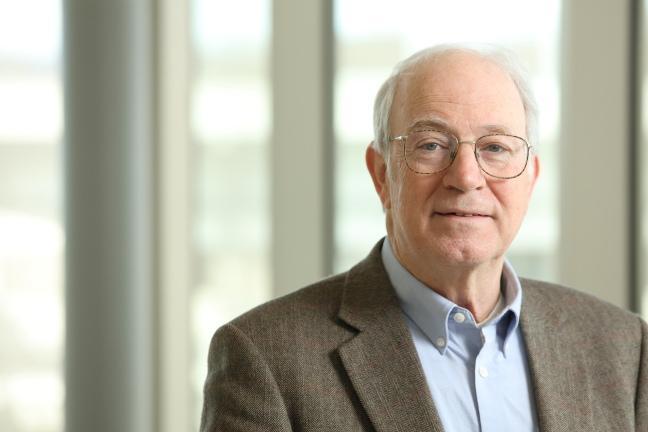 Professor Michael Smith of the Department of Engineering Systems and Environment is using data science to coordinate and analyze public safety data from multiple sources. (Photo by Tom Cogill)

In recent years, the Data Science Institute has provided complex technical support for this effort, which requires gathering, organizing, validating, merging, protecting and analyzing data from multiple agencies and organizations; presenting information in ways that are actionable by agency leadership; and providing evidence of the need for and effectiveness of specific interventions.

As a result, local criminal justice agencies received funding to establish a therapeutic docket that allows non-violent offenders suffering from mental illness to choose mental health treatment rather than incarceration as a means for helping them achieve stability and avoid returning to custody. Additional funds were acquired to expand mental health services for inmates at the regional jail and to help with their transition after release, so they can continue to receive services in the community.

“This collaborative effort has established a community of trust among the participating agencies and the UVA faculty and students,” said Michael Smith, a professor in the Department of Engineering Systems and Environment who has worked on the project since its inception. “These relationships enable project participants to share sensitive data and work together to improve the community for all residents, including individuals in the criminal justice system who suffer from mental illness.”

Drugs often have unwanted side effects, and even the desired effects often are not optimal. While a given drug can effectively target molecules in cells that may inhibit cancer growth, for example, that same drug may also inhibit an immune response or other natural protective effect in the body. As a result, pharmacologists are continuously seeking better drugs to treat illness and pain with minimal negative side effects.

Data Science Institute director and researcher Philip Bourne is working with UVA’s Department of Biomedical Engineering to use a systems approach to drug discovery and for repurposing drugs already in use. This involves exploring countless small molecules that could act as drugs; understanding all the target molecules that bind with a given drug; and determining the cumulative effects of multiple drugs on the human body. That involves sorting through an enormous amount of data, creating a relatively new field, systems pharmacology.

“Using systems pharmacology, we have made some computational inroads into suggesting new designs for drugs, identifying multiple drug targets, and we also are beginning to analyze the cumulative effects of drug action,” Bourne said.

He and his collaborators are working to reduce the side effects of an effective cancer-inhibiting drug; understand why a cholesterol-controlling medication failed to work as desired; repurpose an HIV drug to shrink tumors; compute the drug-target network for the tuberculosis bacterium; and find other drug targets. 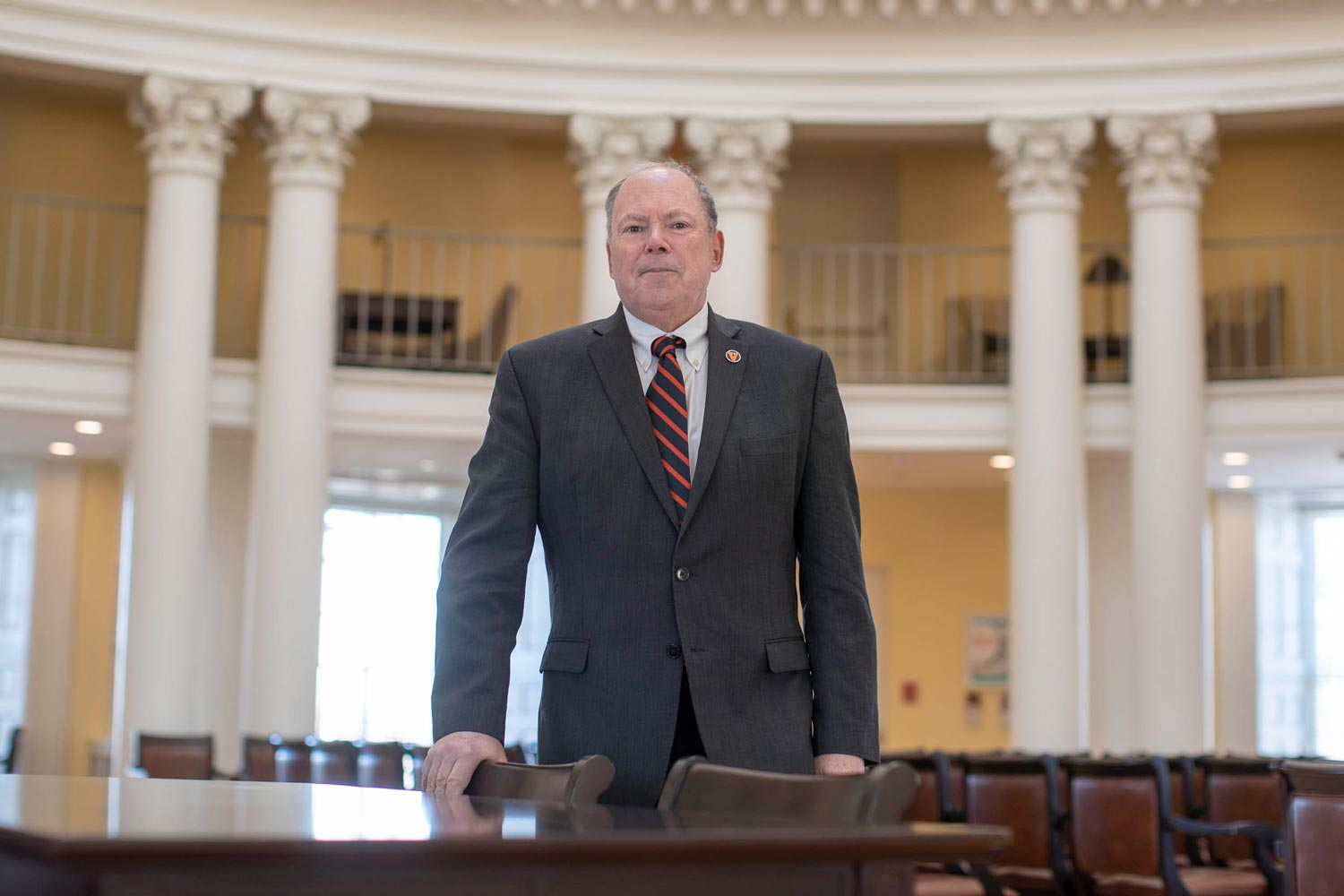 The Microbiome and the Brain

Within the human body, microorganisms – collectively called the microbiome – outnumber our own human body cells, and in the gut microbiome alone, there are more than 1,000 species that encode 200 times as many genes as the entire human genome. Given advances in mapping the human microbiome, there is growing interest in investigating how the microbiome affects developmental processes, specifically, brain and cognitive development.

Former Data Science Institute Presidential Fellows in Data Science Caitlin Dreisbach, a Ph.D. candidate in nursing and an alumna of the institute’s master’s program; and Caroline Kelsey, a Ph.D. candidate in psychology, are studying the interplay between the intestinal microbiome, anxiety and depression during pregnancy, and subsequent maternal-child attachment. Their work is a continuation of their Presidential Fellows project.

“As a registered nurse, I intimately work with mothers and children and can see the direct linkages between theoretical thinking, bench science and the real-world application,” Dreisbach said.

The interdisciplinary approach of the project will generate a first-of-its-kind data set allowing for a comprehensive and novel analysis of factors impacting maternal and child mental health. It brings together researchers from the UVA Babylab at the Department of Psychology and the School of Nursing to examine how the intestinal microbiome predicts levels of maternal internalizing symptoms and threat bias in mothers and their infants.

“This partnership between myself and Caitlin is vital to addressing the important questions of how the brain and body interact, and yet, due to traditional university infrastructure, this pairing tends to be rare,” Kelsey said. “The opportunity provided by the Presidential Fellows project through the DSI allowed us to cross those barriers to collaboration and work on new and compelling interdisciplinary research.”

Bangladesh, Zambia and Pakistan all possess pockets of extreme poverty where sanitation, potable water and abundant food are scarce. And in each of those countries there are high rates of children suffering from environmental enteric dysfunction, a disease which limits the gut’s ability to absorb essential nutrients and impacts children’s mental and physical growth. 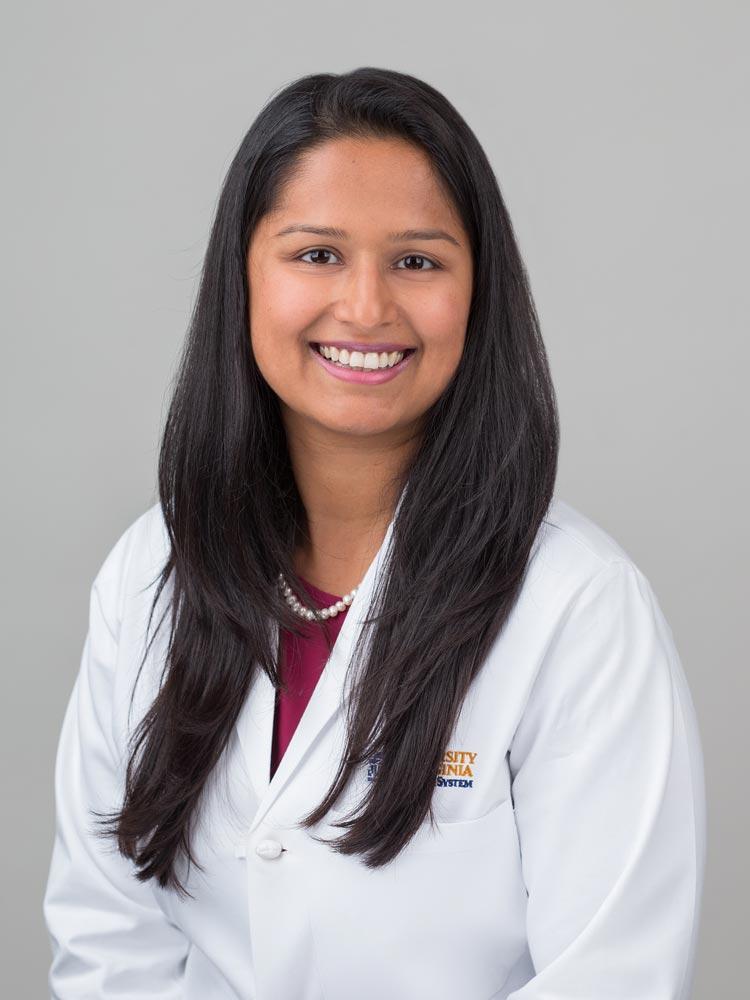 For Dr. Sana Syed, an assistant professor of pediatrics in the School of Medicine, this is why she got into medicine. “You’re talking about a disease that affects hundreds of thousands of children, and that is entirely preventable,” she said.

Funded by a grant from the Translational Health Research Institute of Virginia, Syed is working with Dr. Don Brown, founding director of the UVA Data Science Institute, to incorporate machine learning into the diagnostic process for health officials combating this disease. Syed and Brown are using a deep learning approach, called “convolutional neural networks,” to train computers to read thousands of images of biopsies. Pathologists can then learn from the algorithms how to more effectively screen patients based on where the neural network is looking for differences and where it is focusing its analysis to get results.

“These are the same type of algorithms Google is using in facial recognition, but we’re using them to aid in the diagnosis of disease through biopsy images,” Brown said.

The machine learning algorithm can provide insights that have evaded human eyes, validate pathologists’ diagnoses, shorten the time between imaging and diagnosis, and from a technical engineering perspective, might be able to offer a look into data science’s “black boxes” by giving clues into the thinking mechanism of the machine.

But for Syed, it is still about saving lives.

“There is so much poverty and such an unfair set of consequences,” she said. “If we can use these cutting-edge technologies and ways of looking at data through data science, we can get answers faster and help these children sooner.”

At UVA, There Is a Club for Everyone END_OF_DOCUMENT_TOKEN_TO_BE_REPLACED