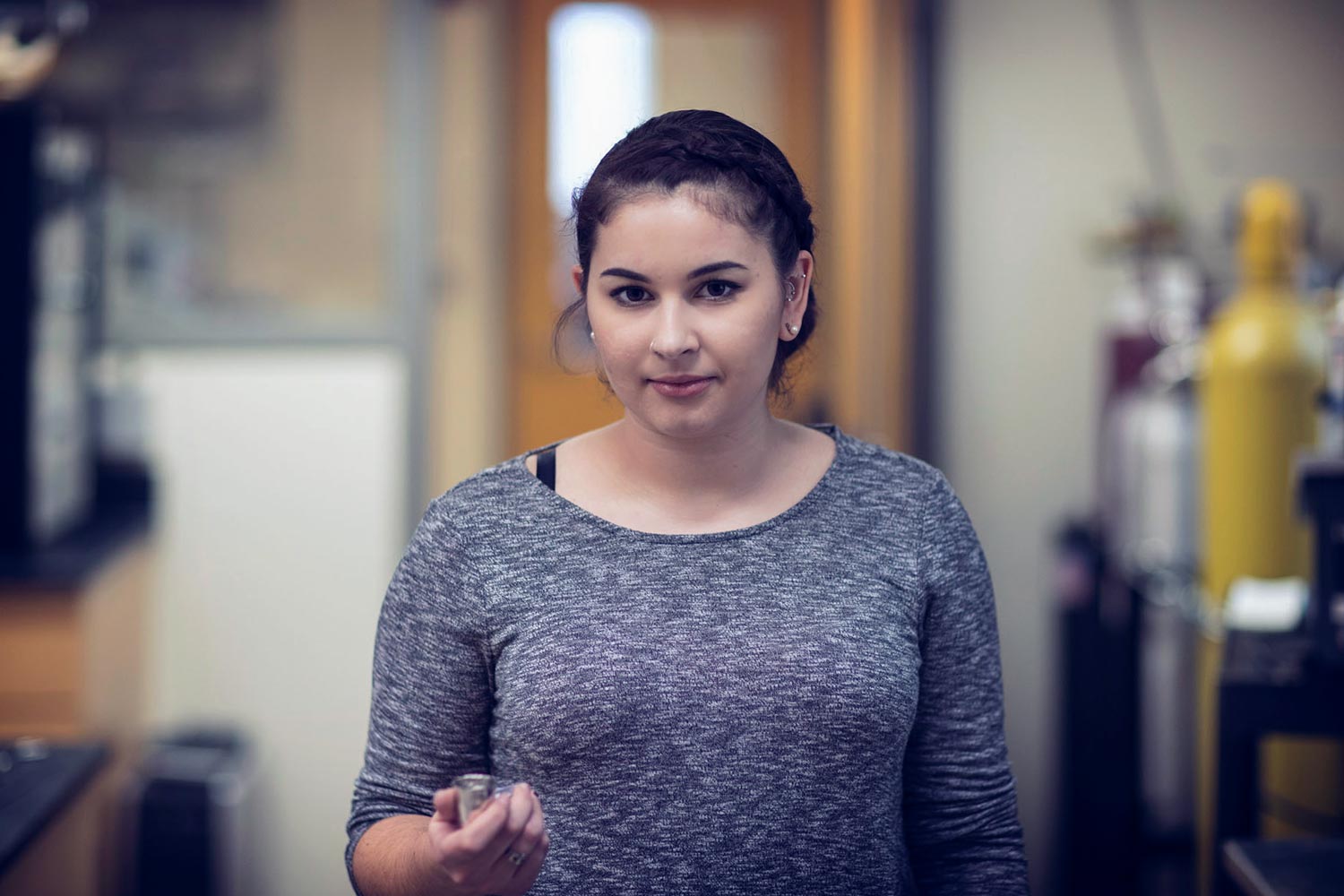 Immersed in her research into ceramic matrix composite materials, Madeline Morales went looking for one thing and found another.

Morales, a fourth-year engineering science major with a  concentration in materials science and engineering at the University of Virginia’s School of Engineering and Applied Science, received a Harrison Undergraduate Research Award last year to study the high-temperature oxidation of ceramic matrix composites for use in aircraft gas-turbine engine components.

“Currently metal superalloys are used for most of the hot engine components, but switching to ceramics that are lighter and have better thermal properties could allow the engines to operate at higher speeds and higher temperatures, making them much more efficient,” Morales said. “As of 2016, ceramic matrix composites have begun to be commercially used for gas turbine engine shrouds, and as the body of research grows, it is desired to switch more components over to ceramic materials to further improve efficiency.”

Morales is seeking to understand the behavior of one particular ceramic matrix composite component, silicon carbide, and how it endures in a high temperature environment.

Through her experiments, Morales expected silicon carbide oxidation, but instead found a brittle black coating that formed on the silicon carbide used in making the components. From scanning electron microscopy images and energy-dispersive spectroscopy, she determined that the compound is mostly carbon with some oxygen present. Further testing found that the compound is mostly highly disordered, graphite-like carbon.

“But I am still working on determining exactly what it is,” she said.

Morales believes the black compound would be destructive to the underlying silicon carbide and that its presence could be harmful to an operating turbine engine. But she does not believe her experiment advises against using ceramic matrix composites.

“By no means does my research disprove the viability of using CMCs,” she said. “It just helps provide more information about what could possibly be happening to these parts over time in such an extreme environment.”

“Maddy is tackling this problem with all the ability I would expect of a graduate student,” said professor Elizabeth Opila of UVA’s Department of Materials Science and Engineering. “She has developed a repeatable experimental method to explore the time and temperature dependence of this silicon carbide degradation reaction. She has scoured the technical literature to understand prior work on any related topics. She is an active participant in my research group, attends all group meetings, and asks great questions when other students present their work. She has the perseverance needed for doing research, is incredibly enthusiastic, and is very passionate about materials science.”

Opila noted that Morales sought out training on a variety of instruments and techniques to conduct her experiments.

Researchers in Opila’s lab seek to decouple all of the different reactions occurring simultaneously in the CMC system so they can accurately predict when these materials will degrade to the point of mechanical failure.

“I had expected to quantitatively measure the increased silicon carbide oxidation rate by measuring the amount of silicon oxide produced, but the observation of the black carbon-rich compound complicated my original research plan,” Morales said. “As a result, my research goals have shifted to focus on identifying and characterizing the properties of this compound and determining the conditions under which it forms.”'

The shifting focus of her research was not unexpected.

“I had been told by a number of professors and peers previously that working in research could be extremely frustrating, but it wasn’t until I was working on a project of my own that I gained full appreciation for how truly disheartening research can feel at times,” Morales said.

Sometimes the problem was because Morales made an error; sometimes it was a power blip that shut off her furnace, ruining a test that took weeks to prepare.

“It forced me to redefine failure in a way that captured its utility: at least now I knew what NOT to do, and that was one step closer than having absolutely no clue what to do at all,” she said. “And sometimes in the face of absolute catastrophe, I just needed the cathartic release of an expletive to vent out the unavoidable frustration before I got back on the horse and continued chugging along with my research.

“We even keep a ‘disaster shelf’ in lab to display some of our greatest failures.”

Morales said she is sometimes astounded by the resolve she has discovered within herself to keep going when the research got frustrating. She has developed a deep appreciation for the graduate research assistants who work in the lab, inching scientific progress forward. And she is very appreciative of Bonnie McFarland, a former grad student who previously worked on this research, for her mentorship, and for Opila’s tutelage. She said they have helped her understand the road ahead.

“There are a lot more questions that need to be answered about my observed results before any conclusions can be made regarding its relevance in CMC applications,” she said.

Morales plans to continue with research in graduate school. She will begin working towards a PhD in Materials Science and Engineering at the University of Maryland in the fall.