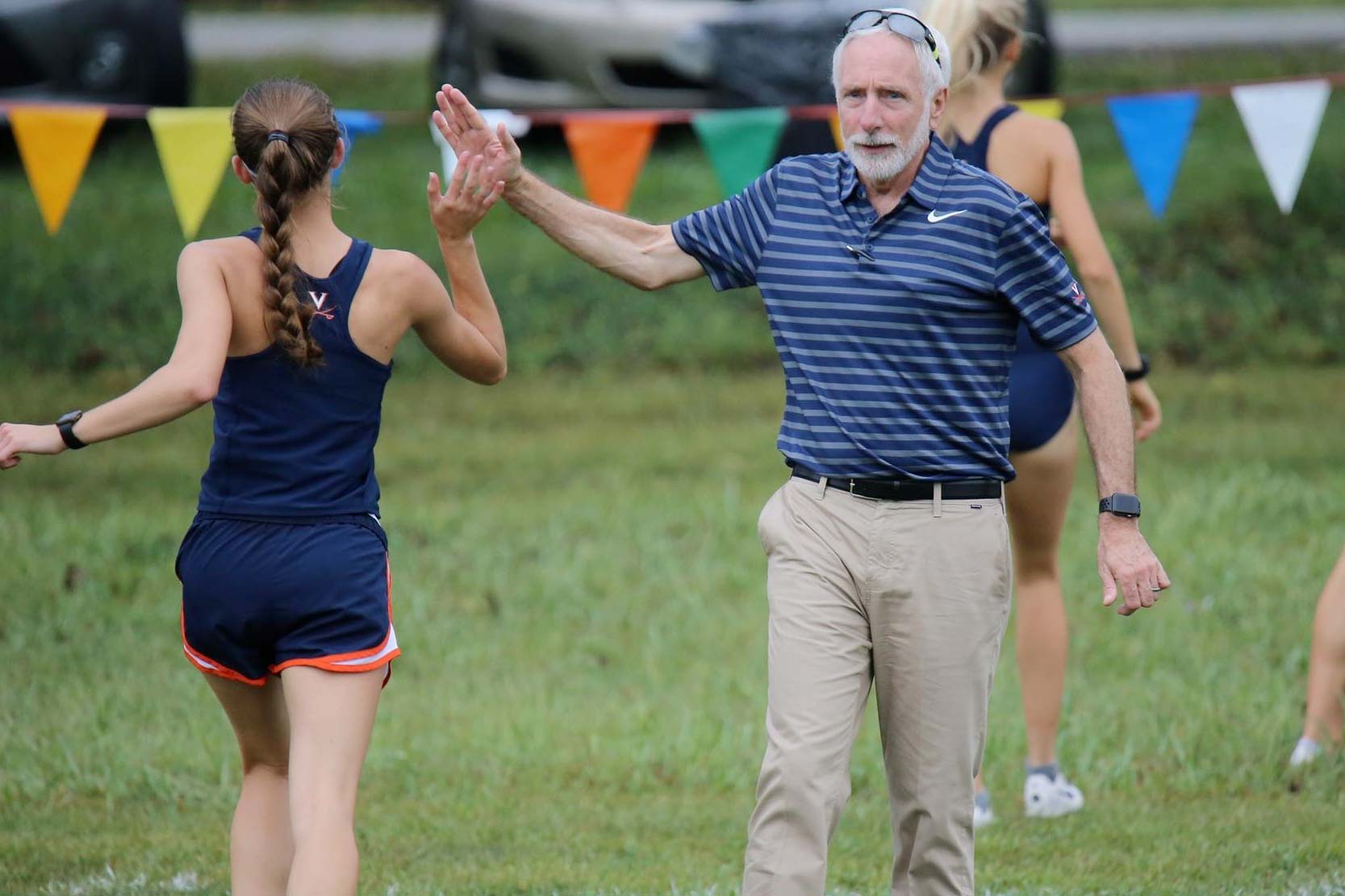 In 1987, the NCAA cross-country championships were held at, of all places, the bucolic site off Garth Road where thousands of University of Virginia students and area residents gather twice a year to tailgate and watch horses compete in the Foxfield Races.

Dartmouth College, an Ivy League program with no scholarships, finished second in the NCAA men’s meet that year.

Three decades later, the head coach of that Dartmouth team, Vin Lananna, is now a legend in track and field and cross-country circles. He’s also, as of this month, a Charlottesville resident.

Lananna, whose teams at Stanford and Oregon won 11 NCAA championships, took over this month as director of track and field and cross-country at UVA, where he’s also associate athletics director for administration.

“I didn’t take the job just to be a coach,” Lananna told LetsRun.com. “I took the job to be a coach at the University of Virginia, because I think it’s one of those places that has a magic to it in the sport of track and field.”

Twice in the 1980s, Lananna unsuccessfully pursued a coaching position at UVA. “I’ve always been intrigued by Virginia,” he said recently in his McCue Center office.

This time was different. In July, Bryan Fetzer retired as UVA’s director of track and field and cross-country. In the search for Fetzer’s successor, athletics director Carla Williams contacted Lananna, who had moved from coaching to athletics administration at Oregon in 2012, to ask him about potential candidates.

“I’d never met her,” Lananna said, “but we hit it off, and we were joking about the two times I applied for a job. I said, ‘Virginia should be a great place.’”

In a subsequent conversation with Lananna, Williams raised an intriguing possibility. “As we started talking she said, ‘Hey, I just talked to folks at Oregon, and I’d like to ask you if there’s any possibility you’d have an interest in the job,’” Lananna recalled.

After discussing the opportunity with his wife, Elizabeth, Lananna became a Cavalier. He told LetsRun.com that he had “no interest in just sailing off into the sunset. ... I felt like it was time to take a jump at doing something exciting in this last chapter of my professional career.”

Lananna, who grew up in New York, is the current president of USA Track & Field, and his résumé in the sport speaks for itself. He’s a former president of TrackTown USA Inc., a non-profit organization that bids for and stages major events, including the U.S. Olympic Track & Field Trials. He’s a fit and youthful 66 and still works out daily.

“He will have no shortage of energy, passion or drive, I can assure you,” said Michael Reilly, chief executive officer of TrackTown USA, who as a Stanford senior ran for Lananna.

Until this month, Lananna hadn’t been to Charlottesville since the late ’80s. But he followed UVA track and field and cross-country from afar and was convinced of its potential.

“I think there’s a lot to build on,” Lananna said.

“UVA has got Charlottesville, and it’s a great school. It’s got all the components that it seemed to me you need for, if not a dominant track and field program, certainly a relevant one. And as I look at it, I think that Virginia can be a flagship track and field program like [the school’s] other sports are, or have been.”

Bennett, of course, guided UVA to the NCAA championship last season. The Cavaliers’ postseason run included a victory over Oregon in the NCAA tournament’s Sweet Sixteen.

“I can’t say I was cheering for Virginia in that one,” Lananna said, smiling.

“I didn’t realize how much I missed coaching until everybody kept asking me,” said Lananna, who spent two years as Oberlin College’s athletics director between his tenures at Stanford and Oregon.

“I think every time I had run into some of my former athletes at any of the places I’ve been, they’d say, ‘Are you going to get back into coaching?’ And I would just chuckle. I didn’t even have time to do what I was doing [as an administrator], much less coach.

“Then I just came to a crossroads. I left coaching to do some of this other stuff, but I realized that what I really like to do is deal directly with the student-athletes.”

Reilly worked with Lananna at Stanford, Oberlin and Oregon and at TrackTown USA.

“I think first and foremost any student-athletes that are looking to discover the best in themselves academically and athletically could make no better decision than to compete on a team and a program led by Vin Lananna,” Reilly said. “If I had to give you the headline, that would be it.”

Lananna has a gift for leadership, Reilly said, and it “isn’t restricted to coaching men and women to perform well in the sport of track and field. It is about building teams, it is about getting people to get the best out of themselves, it is about laying out an ambitious vision and creating a systematic way that collectively everybody buys in and collectively everybody wants to make their contribution to how to do it.

“He just happened to do it professionally the majority of his career leading track and field programs. But when he transitioned to being the athletic director at Oberlin, the same principles applied. It was about coaching and leading a team of coaches and administrators to get the most out of their teams and those student-athletes. But it wasn’t any different. The staff meetings were exactly like team meetings.

“When he founded our company, TrackTown USA Inc., it was no different. When it was about the organizing committees that we built to deliver these major national and international events, it was no different. Those organizing committees were made up of successful business and community leaders, but it was exactly the same approach. So to say that he’s going back to it and have an impact on student-athletes’ lives, no, I’m not shocked about that.”

Sam Seemes has been CEO of the U.S. Track & Field and Cross Country Coaches Association since January 2005, and he met Lananna many years earlier.

“I think that people at Virginia can expect a person with high energy, and a person who’s going to try to infuse that same level of energy in them as well, whether they’re track, cross-country, currently associated the program, or just connected [to UVA and Charlottesville],” Seemes said. “His M.O. is, he’s going to try to put his arm around the whole school and the community and try to get everybody involved in the mission.”

Lananna will want his program “to be a part of the community,” Seemes said, “not isolated from the community.”

Steve Swanson, UVA’s longtime head women’s soccer coach worked with Lananna at Dartmouth and at Stanford. At each of those schools, Lananna arrived first, “so now he’s following me,” Swanson said, laughing.

“I’m really excited. Having known him for this long and knowing the kind of environments that he’s been successful in, looking at Dartmouth and Stanford, I think Virginia has not only some of the same qualities, but even better qualities in a lot of different areas.

“He came here obviously because he wanted to get back into coaching and he missed that part, but if he didn’t buy into [Williams’] vision, if he didn’t see the vision himself, if he wasn’t inspired by the leadership here, I don’t think he’d be here. So I think it says a lot about the University and I think it says a lot about the department and the people involved that you can get somebody with quality of Vin and his reputation and his knowledge.”

Cross-country practice had already begun when Lananna arrived in Charlottesville. Lananna said he’ll focus this year “on trying to listen and assess, recruit and put ourselves in a great position for the future. That’s my thing, to really set Virginia up so that it’s solidified, not just for a couple years, but for the long term.”

He’ll be a hands-on coach, Lananna said. His goal is to “have a good track and field program, as well as a good distance program. I think that some programs are going to lend themselves to being good at distance. That was the case at Stanford.”

During his tenure there, the Cardinal had excellent distance runners and throwers and periodically had high-end jumpers, Lananna said.

At UVA, he said, “I think that we’ll have to pick what our [strongest] areas are, and I think distance will certainly be a point of emphasis, but not the only point of emphasis. What I’ll do, from talking to the staff, is try to assess what they think are the strengths and weaknesses.”

Is Lananna confident UVA can become a national power in track and field and cross-country? He didn’t hesitate. “One hundred percent,” he said.

A Year We Will Never Forget: 2019-20 in Review END_OF_DOCUMENT_TOKEN_TO_BE_REPLACED

‘What Will You Carry With You?’ Remarks From UVA President Jim Ryan END_OF_DOCUMENT_TOKEN_TO_BE_REPLACED