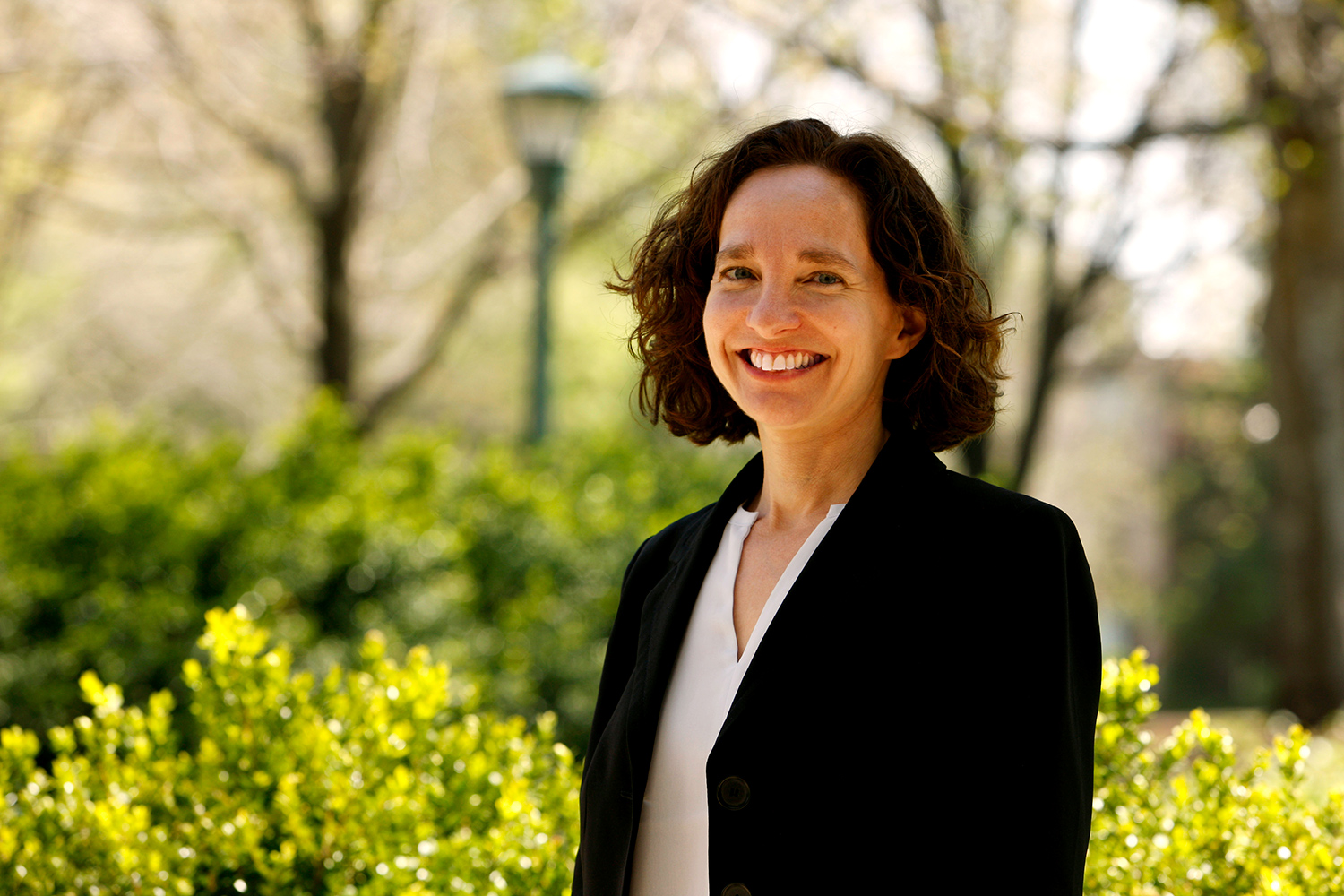 Risa Goluboff’s move into the dean’s office at the University of Virginia School of Law may only be a short walk from the office she occupied as a professor, but she is crossing a milestone. Goluboff is the first woman named to the deanship in the almost 200-year history of the Law School. She begins her new role as the school's 12th dean looking forward to embodying the spirit of the institution.

“UVA Law is a joyous place and a humane place, and I think we model that beautifully already, but I’m excited to model that as the dean,” Goluboff said. While acknowledging the responsibility she undertakes, she said, “I look forward to enjoying it and to making sure that everyone here not only excels, but thrives.”

Goluboff, who joined the faculty in 2002, comes to her post with a pedigree that few can match: She earned an undergraduate degree from Harvard University, a J.D. from the Yale Law School and a Ph.D. in history from Princeton University. She clerked for Judge Guido Calabresi of the U.S. Court of Appeals for the Second Circuit and for U.S. Supreme Court Justice Stephen G. Breyer. She has written two books recognized as significant contributions to civil rights and legal history, “The Lost Promise of Civil Rights” (2007), which received the Order of the Coif award for best book in the legal field as well as the James Willard Hurst Prize; and “Vagrant Nation,” published this year. Her other honors include UVA’s prestigious All-University Teaching Award, a Guggenheim Fellowship, a Fulbright Scholarship and a fellowship from the American Council for Learned Societies.

She also crisscrossed the South for the “Let’s Go” travel books as an undergraduate, making her perhaps the most knowledgeable law school dean about where to get the best barbecue and fried catfish below the Mason-Dixon Line on a $40-a-day budget.

The youngest child of a clinical psychologist and an advertising creative director, Goluboff grew up in New York, a third-generation Brooklynite who also spent several years on Long Island.

She grew interested in civil rights history and law, inspired by legal heroes such as Clarence Darrow and Thurgood Marshall, and by the racial tension she saw growing up in New York. For her undergraduate thesis, she spent a semester living on Johns Island in South Carolina, collecting oral histories and volunteering with a community-based organization.

“Studying the Southern Civil Rights Movement exposed me to the power of lawyers as well as the power of grassroots organizations,” she said. “Law isn’t something out there that exists in the world in a vacuum outside of human control. The law is what people make it.”

Human enterprise is an idea she has continually come back to in her scholarship – not only lawyers shaping law, but everyday people shaping law, an undergirding theme in her two books.

As she graduated from college, she realized she didn’t want to choose between studying history and law, so she chose both, pursuing both a J.D. and a Ph.D. In law school, she realized she could make a difference as a legal academic.

“It became clear that as a law professor, I could be a scholar with a real impact on the world, both because I am teaching lawyers and shaping their views of the world, and also because I can sign amicus briefs, write op-eds and generally become involved in current legal issues,” she said.

After becoming a professor, Goluboff said, she loved leading students to “aha moments,” and realizing them herself from students as they made new connections.

Goluboff said she sees her new role as further enabling her to empower students. Among her goals as dean are ensuring that every law student graduates as fully prepared as possible for his or her career path of choice, as well as finding new ways to educate students about the responsibilities and the opportunities that come with their law degrees.

“I think this is a real place of joy and a place of humanity, a place that from admissions through career placement and everything in between, really takes seriously that we want our students to flourish as whole people. We create an atmosphere of caring about our students, our faculty, our staff; an atmosphere that simultaneously celebrates our many differences from one another and prizes collegiality and community.” - Risa Goluboff

“Legal education must do so much. It must teach students everything from the fundamental, analytical ‘thinking like a lawyer,’ to practical skills, to big-picture historical and theoretical perspectives,” Goluboff said. “Life is long, and law school is comparatively short. This is students’ chance to set themselves up to hold the public trust that is the law, and to exercise leadership and power over the course of their careers. So our role is not only preparing them as lawyers, but also in helping them conceive of themselves as holders of that trust.”

“It’s not only that we enable you to be happy while you’re in law school, and then you go off and have a great career. It’s that your happiness while in law school, the multi-faceted education we provide, and the kind of community that we foster here makes possible that phenomenal career,” she said.

“Our students go on to become leaders of nonprofits, prominent government officials, managing partners in law firms, and CEOs and in-house counsel at very high rates. That’s not only because we’ve taught them analytical reasoning or how to take deposition, it’s also because we’ve taught them how to think big and have perspective on the world, and how to be a team player.”

Goluboff said she is continually impressed by the kindness of UVA law students.

“When I was pregnant with my first child, they had a whole plan in place if I were to go into labor during class. They knew who was going to call the ambulance, who was going to find my husband [Professor Richard Schragger], and who was going to stay with me,” she said. “They cared about me, just as they care about each other and this whole community. That’s a hallmark of who our students are.

“One of the main things that I look forward to is embodying all of the positive spirit of this law school,” she said. “I think this is a real place of joy and a place of humanity, a place that from admissions through career placement and everything in between, really takes seriously that we want our students to flourish as whole people. We create an atmosphere of caring about our students, our faculty, our staff; an atmosphere that simultaneously celebrates our many differences from one another and prizes collegiality and community.”

That community is the linchpin not only of the student experience at UVA, Goluboff said, but also of the productivity and reputation of the faculty.

“Our intellectual community is unparalleled in its openness to all ideas and methodologies, and its commitment to true dialogue,” she said. “The traffic in ideas that is a regular and crucial part of the Law School enables our faculty to produce scholarship of the highest quality.”

Goluboff said she plans to focus on strengthening the school’s already stellar academic reputation, while continuing to nurture its culture of collegiality.

Because faculty and students view themselves as part of a single community, everyone at the Law School benefits, she said.

“It makes the students scholarly partners and the faculty committed and exceptional teachers,” she said.

In the past four years, a number of leaders in higher education have come from the UVA Law faculty, in addition to Goluboff: 1995 alumna Elizabeth Magill, a former vice dean at UVA Law, became dean of Stanford University’s law school; former professor Jennifer Mnookin became dean at the University of California-Los Angeles School of Law; and 1992 alumnus James Ryan, also a former vice dean, leads Harvard’s Graduate School of Education.

“We’ve always prided ourselves on nurturing our junior scholars,” Goluboff said. “It turns out that we also nurture leaders. I don’t know if you can point to any other institution and find four deans emerging from a five-year cohort. That’s a remarkable testament to our culture.”

Goluboff succeeds Paul G. Mahoney, who served for eight years as dean and also was on the Virginia law faculty before he became dean. He will return to teaching at UVA in the fall of 2017, after a sabbatical.