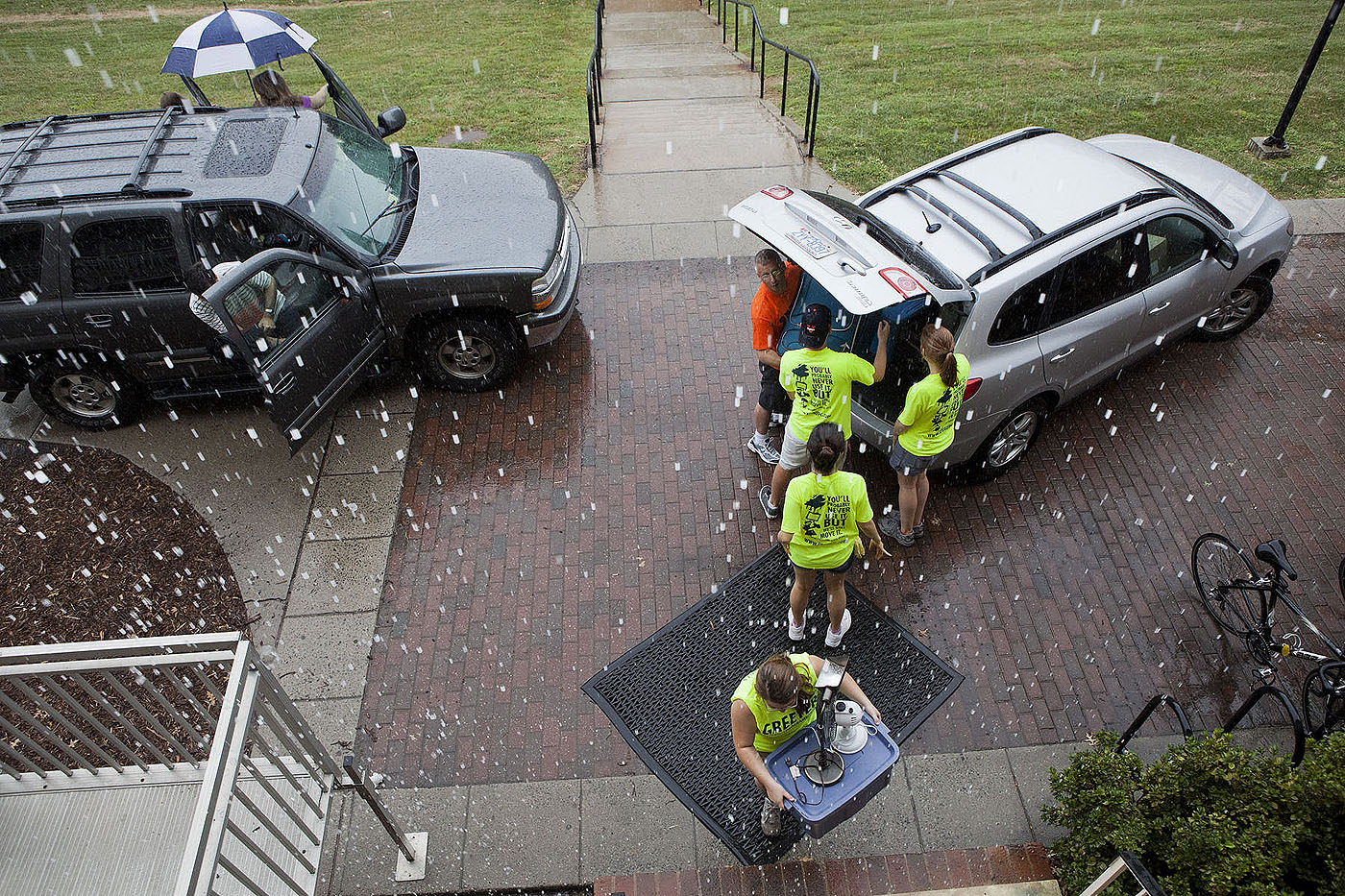 August 22, 2011 — Bracketed by rain and thundershowers on Friday and Sunday, the first two-day move-in weekend at the University of Virginia went smoothly.

First-year students lined up Friday to check in at the Student Activities Building an hour before they could move into their new homes away from home. With the help of parents, siblings and dozens of official U.Va. "Greeters" in fluorescent green T-shirts, the newest Wahoos – many already sporting Virginia logos – carted boxes, bags, suitcases and those ubiquitous small refrigerators to their rooms.

"The Greeters were outstanding," one father said. "They swooped in like bees and moved everything in one trip."

A heavy rain that fell around noon wasn't much of a deterrent. People hurried to open umbrellas and get inside or to covered walkways with their loads. At least one student was prepared, wearing her pink, polka-dotted rain boots.

Move-in was held over two days this year, Friday and Saturday, to ease traffic congestion, because construction in the Alderman Road housing precinct made for less nearby parking. About 1,200 first-year students were scheduled to move into some Alderman Road residence halls and the Gooch/Dillard complex on Friday, with an additional 2,200 first-year students – and about 3,000 upperclassmen – moving in Saturday. University and Charlottesville police were on hand to keep traffic flowing.

Kate Bocskor from Vienna and Patty McChesney from Reno, Nev., were waiting in their Fitzhugh House room for their third roommate, Rachel Kim, an Oakton resident. Although they had emailed and texted each other earlier, Bocskor and McChesney said they unexpectedly met at summer orientation. They were in the same small group, and when one introduced herself, the other said, "Hey, you're my roommate."

McChesney was relieved to have arrived, after a flight cancellation and a 24-hour trip from Reno. Raised in foster care and a first-generation college student, she is a Quest Scholar. U.Va. recently became a partner school with QuestBridge, a program designed to connect bright, motivated, low-income students with top educational institutions.

"I beat the statistics," she said proudly, referring to her success in school despite her background.

Roommates Matthew Kincaid, from Williamsburg, and Stefan Moscalu, from Lynchburg, were settling into their room on the first floor of Fitzhugh, with one mom making her son's bed and the other's dad connecting the computer. The two young men had become acquainted on Facebook.

"It's U.Va.!" said Moscalu, glad to be back on Grounds. His family, which moved to the U.S. from Romania in 1999, was already familiar with the University. Moscalu's brother graduated in 2008, and the younger was happy to be following in his footsteps.

She's considering environmental sciences as a major, while Brackmann takes a spot in the Architecture School's class of 2015.

Across the hall, another Woody resident, Cassie de Leon of Richmond, said she was glad to be in an air-conditioned dormitory. De Leon, who plays piccolo with the Cavalier Marching Band, had been in Charlottesville all week to attend practice.

Her father, Armando, who works at U.Va. as sustainability programs manager, said he was happy his daughter wouldn't be too far away.

After the beds had been made and computers connected, many parents and students walked over to Old Cabell Hall for President Teresa A. Sullivan's welcome. Asking how many parents were dropping off their first child at college, the president held out a box of tissues and said, "These are for you." A parent picked up the box and passed it down her row.

The president was joined onstage by University administrators to help answer parents' questions. How can students become involved in giving back to the community? How do the buses work? When do you sign up for second-year housing? What are the secret societies and what do they do?

A busy Sunday of safety orientations and residence hall meetings was capped with the Opening Convocation and Honor Induction for first-year students. The traditional Lawn ceremony was nearly moved to the John Paul Jones Arena because of passing thundershowers, but the rain blew through, the sky cleared and students gathered on the slightly soggy Lawn.

After welcomes from Dean of Students Allen Groves and Sullivan, Ann Marie McKenzie, a fourth-year College of Arts & Sciences student and chair of the Honor Committee, introduced Michael Suarez, University professor and director of the Rare Book School, who gave the honor keynote.

The University's honor code, he told the first-year students, is indeed a promise not to lie, cheat or steal.

"But the very word 'honor' calls us to be honorable to each other, not merely by not committing transgressions, but also by doing reverence to the other in our midst," he said.

Being part of the community of trust, he said, will at times require compassion, action and sometimes even courage. "If your honor costs you nothing," he said, "it means precisely nothing."

Then the class of 2015 signed the honor pledge and headed across University Avenue for ice cream and cookies at the president's house, Carr's Hill – one last taste of sweet summer before their U.Va. careers begin in earnest with the start of classes on Tuesday.


— by Anne Bromley and Marian Anderfuren

Class of 2020: Memories and Moments From a Long-Anticipated Celebration END_OF_DOCUMENT_TOKEN_TO_BE_REPLACED