Honor Referendum: Students to Vote on the Future of Single-Sanction Expulsion Penalty 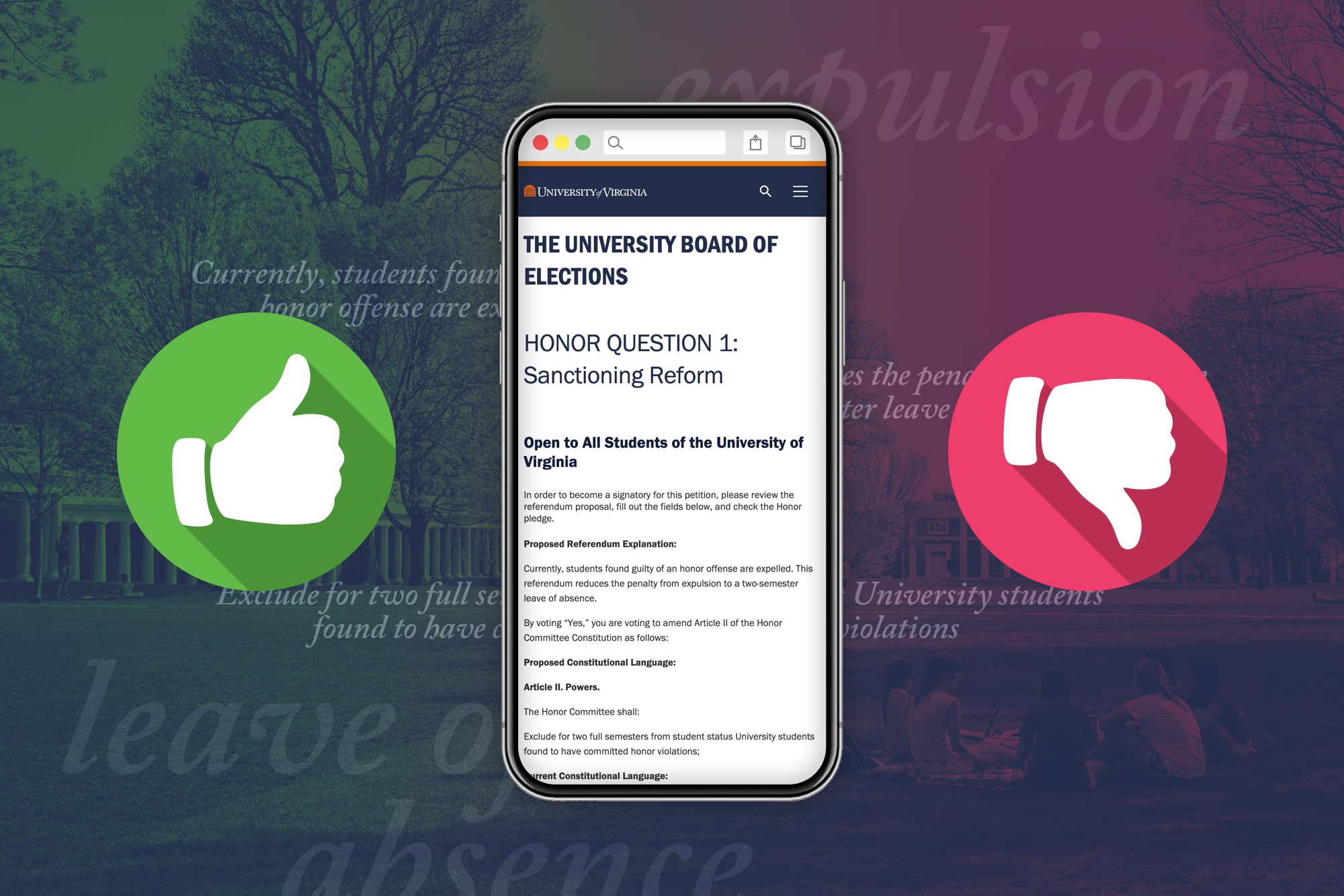 In student elections this week, University of Virginia students will vote on a proposal to change the penalty for an honor violation from single-sanction expulsion to a two-semester suspension.

The proposed change was brought forward by a member of the Honor Committee, third-year School of Law student Christopher Benos, and garnered enough student signatures – 1,250 – to be put on the ballot in this year’s elections. Unlike previous proposals, it does not alter the only current exceptions to the single-sanction rule: “conscientious retractions,” in which a student admits to an honor offense before he or she has come under suspicion, or “informed retractions,” in which accused students take responsibility for an offense before the case proceeds to a hearing. Students who file a conscientious retraction do not face expulsion; students who file an informed retraction face a two-semester suspension.

Elections will run from Wednesday to Friday. The proposal will need to meet two thresholds to pass. First, at least 10% of the total student body must participate in the referendum. Second, of the students who vote in the elections, 60% must vote in favor.

Honor Committee Chair Andy Chambers, a fourth-year student in the College of Arts & Sciences, said the committee encourages all students to participate in the voting process, no matter what their view of the single-sanction penalty.

“It is imperative, when we address issues like our sanction, held as part of UVA for 180 years, that we get high voter turnout,” he said. “We want the election results to reflect the clear will of the student body.”

Even without elections, Chambers said, UVA students are well-versed in debates around the honor system.

“Discussions of the honor system happen all the time, whether on the Corner or in a debate hall,” he said. “UVA students are very plugged in on that front.”

University Rector Whittington W. Clement said in a statement that the honor system “has thrived throughout the years because its stewardship lies in the hands of students themselves and their authority to shape the honor system as they believe will best serve all students – current and future.

“To achieve that goal, it is critical that there be widespread, vigorous discussions leading to a high participation in the referendum among all students from each of our 12 schools. We trust that students will weigh the merits of the proposal and be guided by a deep conviction that an effective, fair system of honor should continue to be a hallmark of every University of Virginia student and graduate.”

In his own written statement, UVA President Jim Ryan called the honor system “one of the most significant and enduring aspects of a UVA education.”

“The honor system is more than sanctions or a system of punishment for infractions. It is a shared value and commitment; it is fundamental to our ethos. It is an indelible characteristic of a Virginia graduate,” Ryan said. “All that said, and as important, the honor system is the hallmark of an equally significant tradition: student self-governance. The honor system is a system run by and for students. Students have the right to change the system. The fact that students have proposed a change might be worrisome to some, but I view it as testament to the importance of the honor system and the sense of responsibility students feel about it – regardless of their views about this particular referendum.”

Ryan encouraged all UVA students to participate in the debate and the election process.

“My central message to students is to please engage in this discussion. Educate yourselves about the honor system and this referendum. Reach out to your friends and to alumni to learn about their views and their experiences. This is ultimately your choice. I would encourage you to be as prepared as possible to make it an informed choice.”

» Read the Rector and the President’s full statements.

Meet the New Cavalier on Horseback: She’s Eager To ‘Carry On a Legacy’ END_OF_DOCUMENT_TOKEN_TO_BE_REPLACED

Housing Changes Are a Breath of Fresh, Cool Air – Especially for Lawnies END_OF_DOCUMENT_TOKEN_TO_BE_REPLACED

Virginia Football – For All Virginia END_OF_DOCUMENT_TOKEN_TO_BE_REPLACED