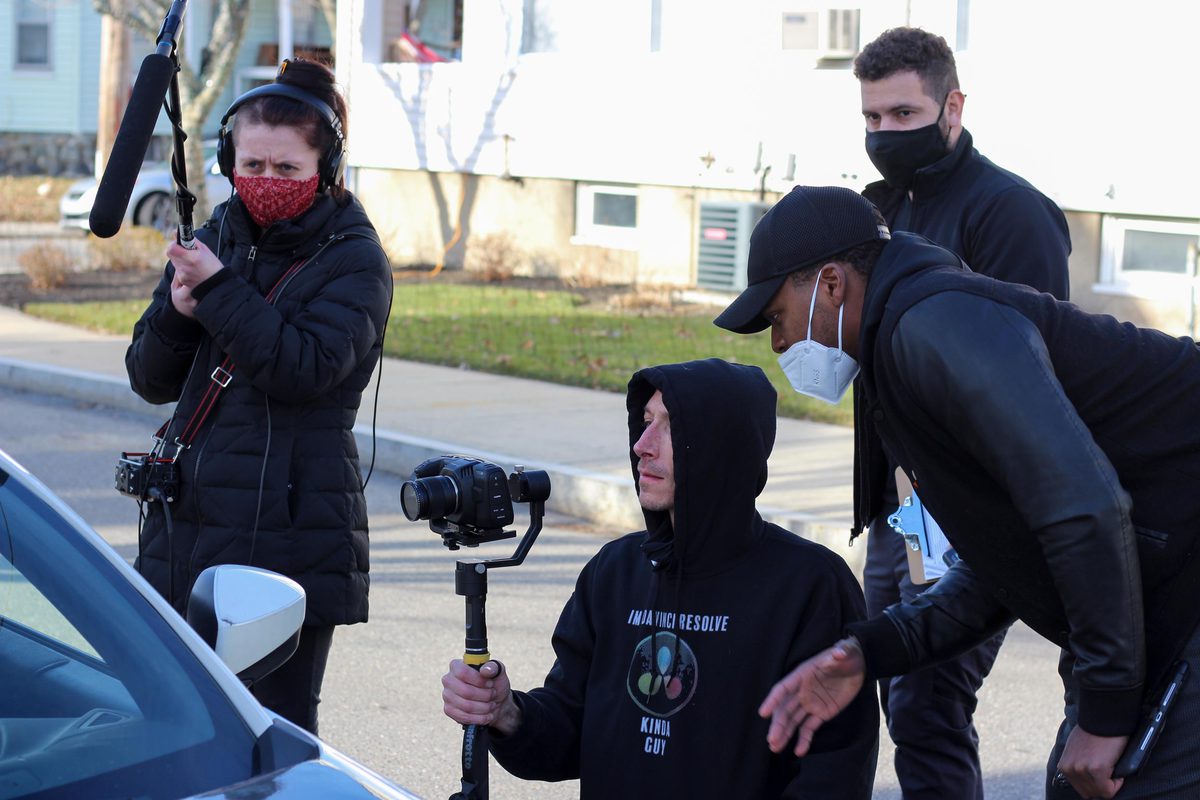 For former University of Virginia football player Canaan Severin, the answer came while riding a train.

It was in 2019, while making 90-minute daily round trips on a commuter rail from his father’s home in Marlborough, Massachusetts, to a job as an account executive at a consulting firm in Boston, that Severin – just for the pure joy of it – began writing. 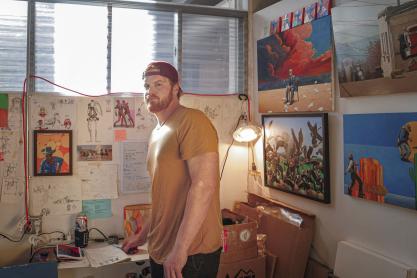 Driven by the quote, “Truth is stranger than fiction,” Severin mainly wrote about things he thought people could relate to.

Drawing on some of the skills he had learned in drama courses under UVA lecturers Cady Garey and Denise Stewart, Severin wound up writing seven scripts.

More than anything, it was a release for Severin, who wasn’t giving serious thought to what his writing might lead to.

But after he was laid off from his job at the start of the global pandemic in March 2020, Severin decided – at his own expense – to turn one of the scripts into a short film.

Severin’s gamble – he prefers to call it an “investment” in himself – appears to be paying off.

Severin’s 22-minute film, “Lean In,” was selected for last month’s Roxbury International Film Festival, one of the longest-running film festivals in Boston.

“He is the person who patiently gathers information and works behind the scenes and then surprises you,” said Garey, who had regularly discussed film with Severin, but had no idea he had gotten one of his scripts produced until she received a text message from him in early 2021.

“He had a story to tell and he worked really hard to bring it to fruition. I know how difficult it is to do, and he did it during a pandemic,” she said.

Severin himself seems to still be processing what he has accomplished. “The fact that I wrote the script and the fact that the actors and actresses took the time to remember it and study it and really show up on shoot day … that was truly amazing,” he said. 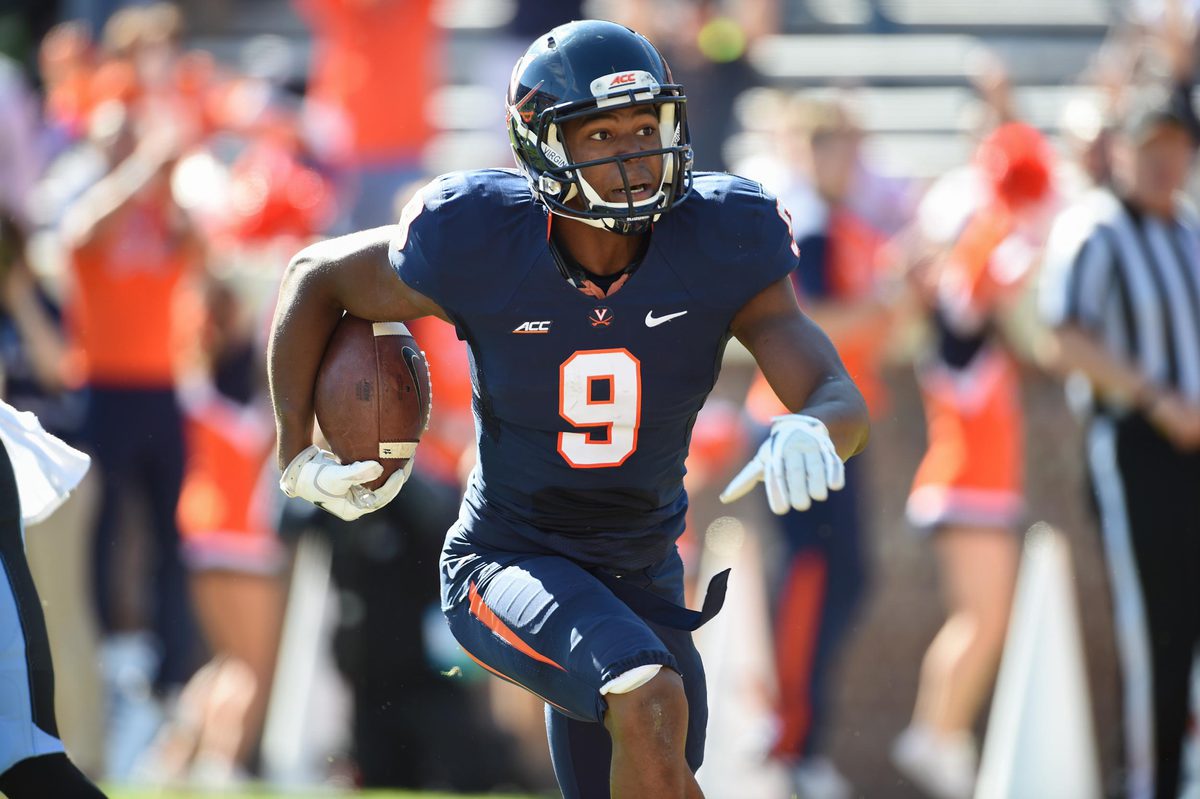 As a senior in 2015, Severin finished third in the Atlantic Coast Conference with 759 receiving yards and made the All-ACC second team. (Photo by Pete Emerson, UVA Athletics)

Severin grew up in Marlborough and was a standout football player at nearby Worcester Academy. He was recruited by former UVA head coach Mike London, appearing in every one of the team’s games, mostly on special teams, as a first-year player.

Severin’s breakout year came in his third year, when he caught 42 passes for 578 yards and five touchdowns, all team bests.

In 2016, Severin signed a contract with the NFL’s Pittsburgh Steelers, but hurt his shoulder and spent the entire year on the team’s injured reserve list.

The next season he played well in the preseason, catching two passes against the New York Giants, but was ultimately waived.

Severin then spent the next two seasons on the Giants’ practice squad before a knee injury prevented him from passing a physical with the Cincinnati Bengals.

It was a tough way to end a career he had poured so much into, but Severin is thankful for his experiences – particularly those with Steelers head coach Mike Tomlin.

Severin had just joined the Steelers for minicamp in 2016 when he was faced with the dilemma of whether or not he should miss precious practice time – he was an undrafted free agent trying to make the team – in order to travel back to Charlottesville for UVA’s Final Exercises.

“He stopped me mid-sentence and said, ‘Canaan, I’m from Virginia and I went to William & Mary, which is an awesome school, but I wanted to go to UVA in the worst way possible,’” Severin recalled. “He said, ‘If you don’t drive back or fly back to get back to Charlottesville and walk the Lawn, you’re crazy. … That’s why your family put so much time and energy into you – to see you graduate.’

“It was huge to me from a standpoint of [seeing] Coach Tomlin and his values, and the way that someone who didn’t go to UVA perceived [the experience] and what that means. That meant a lot to me.” 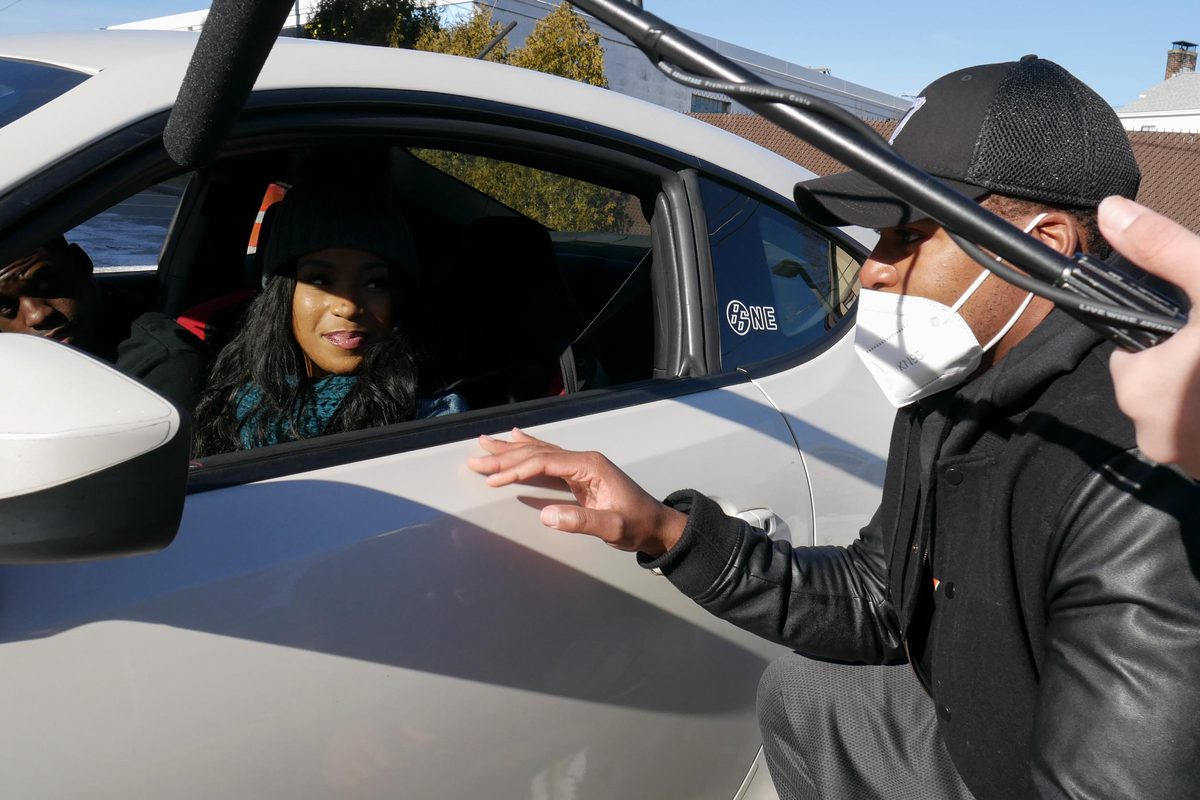 Some of the most powerful scenes of Severin’s film took place in a car as a married couple talked. (Contributed photo)

It was also through Tomlin that Severin began contemplating a screenwriting career. He occasionally picked Tomlin’s brain about former Steelers running back Rashard Mendenhall, who had retired early from football and become a writer and story editor for the HBO sports comedy series, “Ballers.”

“What stood out to me was that he was engaged from day one,” Garey said. “He asked questions and hung out to talk to me. He was willing to volunteer – even though he is a calm, quiet guy.

“It was evident how much he enjoyed working with his classmates to create this [play] – there was a lot of laughing going on.”

Severin said the course helped him tap into his “creative flow.”

“I kind of knew acting wasn’t my strong suit,” he said, “but creating a plot and creating a storyline was something that really pulled me and something I gravitated toward.”

Still, Severin didn’t give much thought to pursuing screenwriting after his NFL career ended, even though, after failing his physical with the Bengals, he was at an obvious crossroads.

“From middle school and high school, you’re seen as an athlete, as a football player,” Severin said, “so it was like, ‘What am I? Where do I go if I’m not playing football, and who am I?’”

Severin took a job as an account executive at Robert Half Talent Solutions, a human resources consulting firm in Boston. Severin said it was a great experience in which he learned a lot about the business world, but just as he was finding his footing, the pandemic hit and he was laid off.

“A part of me was like, ‘It could be easy to feel bad for myself,’” Severin said, “but I said, ‘How could I utilize this time, how could I maximize it?’

“That’s when I started taking leaps.”

With fond memories of his time in Garey and Stewart’s drama courses lingering in his head, Severin reached out to Pure Dice Films, a production company near his home, and asked if he could shadow a crew.

From the get-go, Severin was hooked. “I loved the way they worked – their preparation, their time management – and wanted to dive in deeper,” he said.

Eventually, Severin – who had saved money from his time at Robert Half – decided to take his biggest leap. He hired Pure Dice to produce “Lean In.”

“A lot of people are like, ‘How are you going to make money off it?’” Severin said. “That wasn’t even a thought, to get a return. It was like, ‘Let me see if I can put myself out there and express myself and make this film.’”

That was no simple task, as Severin suddenly found himself conducting auditions, scouting shooting locations and, when the time came, directing the film.

“A part of me was like, ‘What do I know about evaluating actors?’” Severin said. “But one thing I could do as the writer of the script was I knew how it should sound, what certain lines should sound like.

“Reading the lines with the auditioning actors, I knew which lines needed to pop and matched with what was in my mind. That was a really cool process and really humbling as well – the fact that I wrote a script and actors and actresses showed up.”

Read-throughs with actors reminded Severin of walk-throughs he was accustomed to on football game days. Instead of going over plays, they read over lines. The whole process felt natural, but daunting at the same time.

“I was like the guy running this thing and felt like, ‘This needs to have like a Coach Tomlin or Coach [Mike] London or Coach [Tony] Bennett feel,’” Severin said, smiling. “I was like, ‘I need to give a speech to the actors and actresses and crew.’

“I really came prepared and let them know, ‘If you’re in this room, you were chosen. You don’t need to prove anything anymore.’ I just wanted to instill in everyone’s mind that everyone there was capable and they had ability to make the movie pop, to make the film a good one. I was like, ‘If we all just channel our creativity the best we can, it will be a great experience.’

“Lean In” is about two brothers who stopped talking to each other because of a disagreement they had years before. One of the brothers, with the encouragement of his wife and a therapist, is eventually able to let go of things holding him back and talk through the problem with the other brother.

“So many things can be handled with a conversation,” Severin said. “I’ve had situations in my life where there was tension with both parties, but if two people are willing to lean in and have some hard conversations, it’s amazing how quick things can squashed and things can be smoothed over.

“It almost became a quote in my life, where if I’m having a tough conversation with my brother or my dad or a teammate – anybody really – it’s like, ‘Let’s lean in, man, and handle this right now before it gets too big,’ because a lot of these things can grow and become a big problem.

“When somebody leans, it can make it easier for the other person to lean in as well. That’s what I wanted to show. I’m sure all of us have gone through relationships like that, where there is some kind of friction that is in the way of a fruitful relationship. That’s something that I wanted to capture.”

Severin did just that, according to Garey.

“I really loved that he shared the story of … the delicate and complicated relationships experienced by these brothers,” Garey said. “He really found their humanity, quiet struggle, and their joy, too. That sense of struggle and joy is so beautiful – a hard combo to grasp.”

Severin is in the process of submitting “Lean In” to other festivals. He would love to see it made into a feature-length film; he also has several other scripts he’d like to shoot.

As he looked back on how “Lean In” – and his film career – got started, Severin broke into a wide smile.

“It all came from a thought while riding on a train,” he said. “Now it’s getting some recognition. Recognition is cool, but I really believe it’s the story that really resonates.

“Getting messages from people who have watched the film saying, ‘I haven’t talked to my aunt in six years, but after watching this film I called her and now we’re getting coffee on Tuesday’ – that’s incredible. I’ve been in situations like that as well, so to hear that – that’s what it’s all about for me, to be honest.” 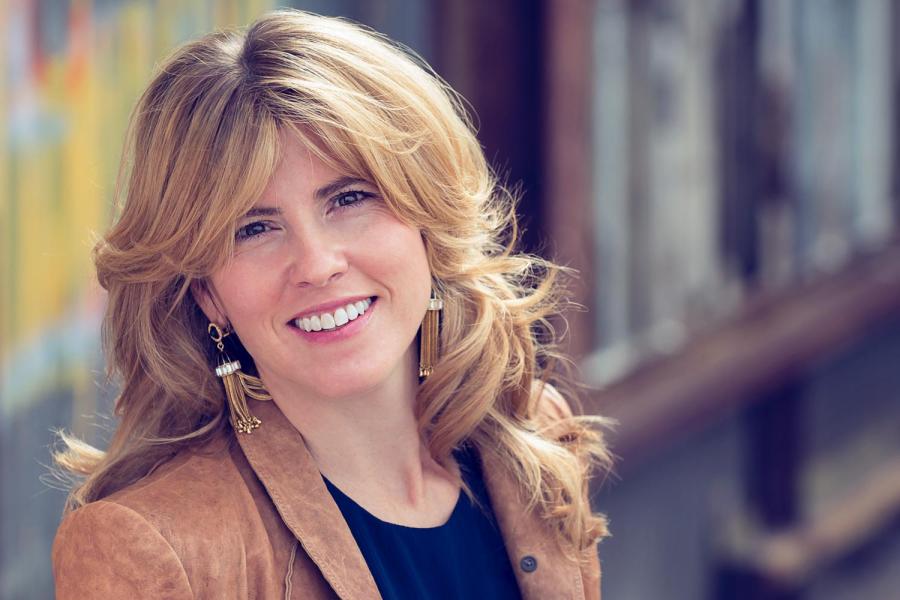 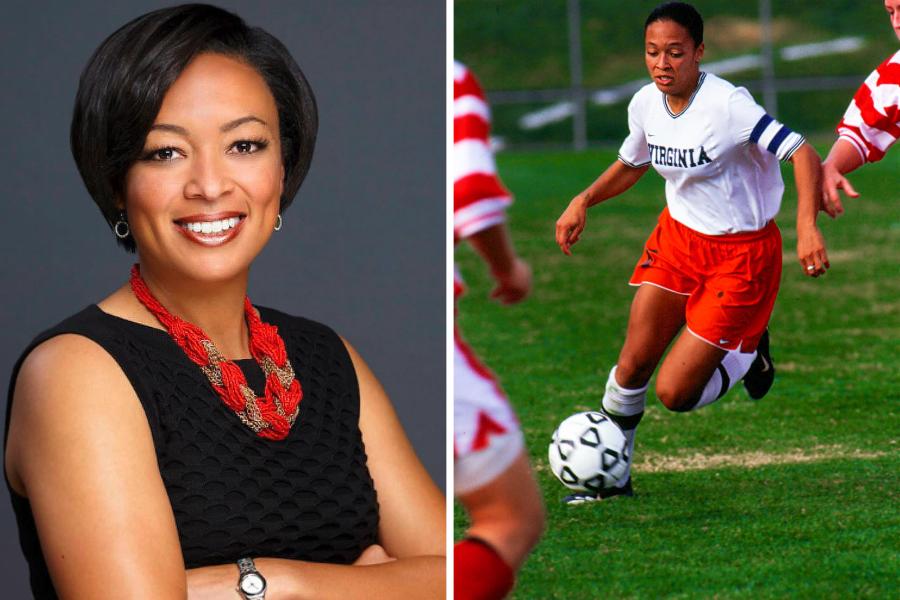 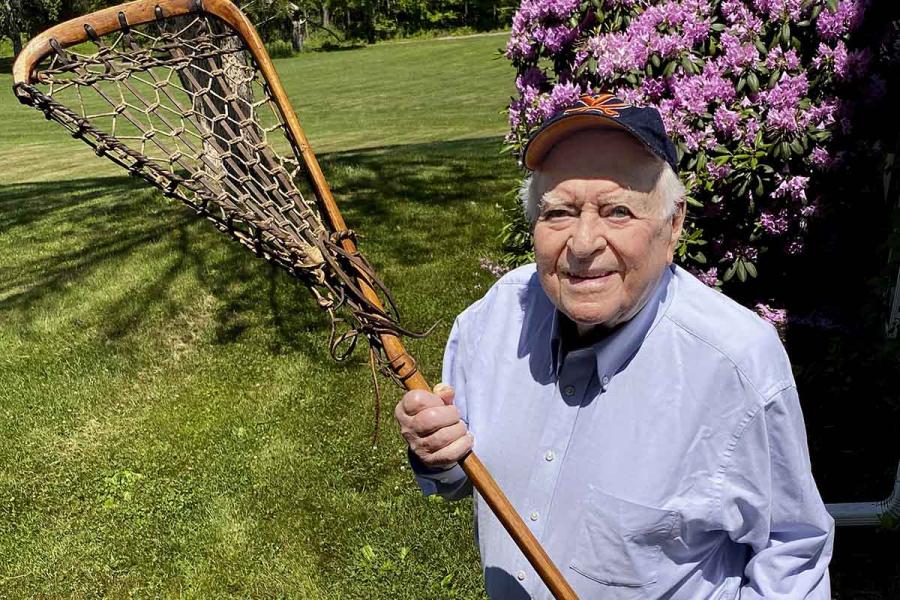