Hoo-rizons: Pole Vaulter Takes Her Shot at the 2020 Olympics 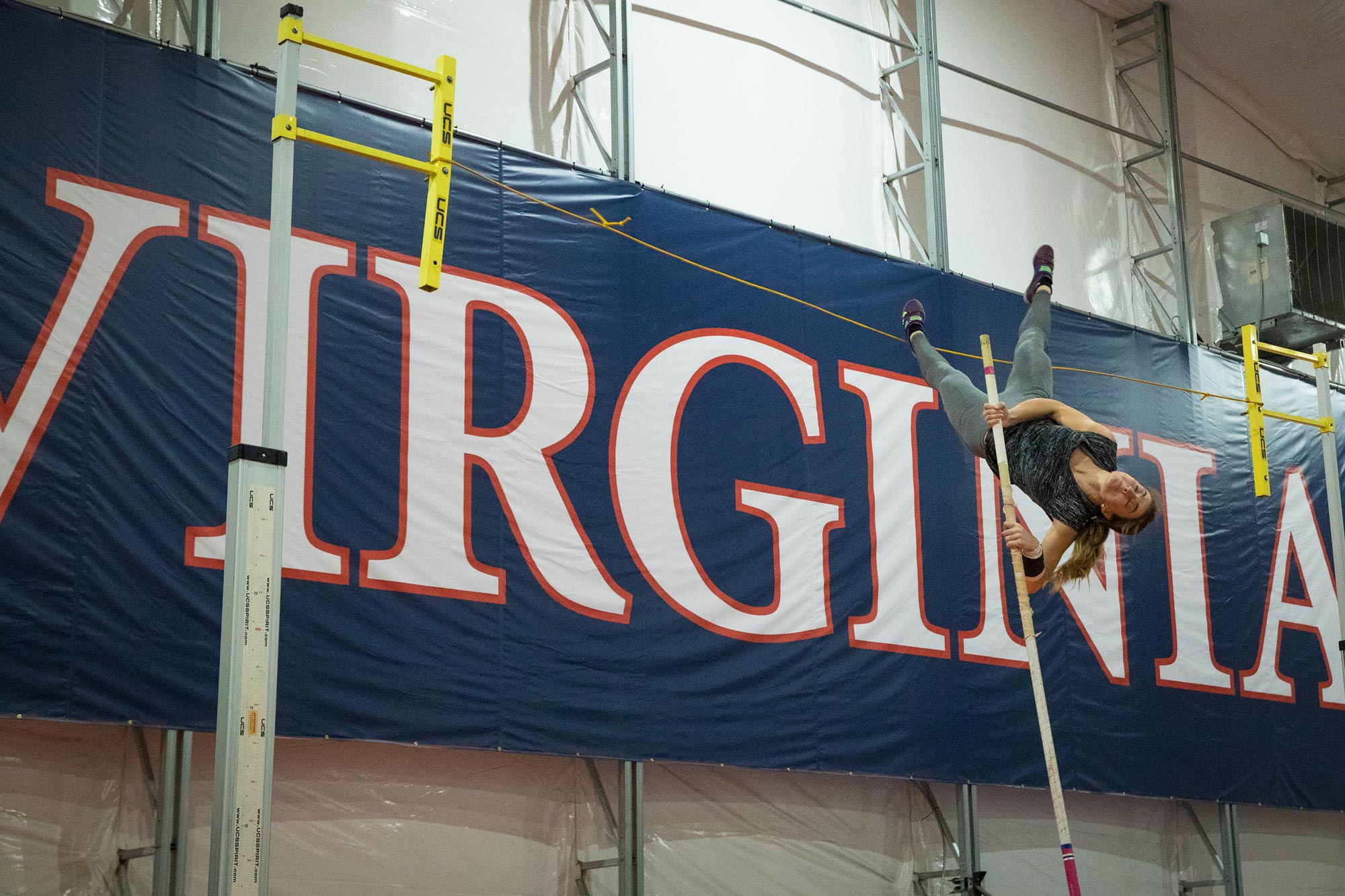 Competing in the pole vault without a pole is, well, obviously not possible.

That’s the situation Brazilian pole vaulter Juliana Campos found herself in last July at the 2019 Summer Universiade in Napoli, Italy, after her poles were lost on their way to the competition site.

Some of Campos’ competitors may have thought to themselves, “Not my problem.”

But not Bridget Guy. Without hesitation, the former University of Virginia pole vault star offered Campos her poles so that she could compete.

In November, the International Fair Play Committee recognized Guy for her “act of generosity and friendship” with its Fair Play Award.

“What was really cool is that we used the same poles, which was kind of like a shot in the dark  because any athlete could be using different length poles, different weight, different stiffness,” Guy said. “Just the chances that ours were close enough that she could use them was pretty cool.”

Even cooler: Guy and Campos – who had never met prior to the competition – wound up becoming friends.

“She’s a really sweet girl,” Guy said, “and I know she would have done the same thing for me, too.”

Guy won a bronze medal in the event, while Campos took fifth.

No doubt, the two will cross paths again soon.

The world of competitive pole vaulting is not a big one, and Guy – a three-time All-American and ACC champion at UVA (who, by the way, is not related to former Cavalier basketball star Kyle Guy) – is intent on going as far as she can in the sport.

For Guy, that means the 2020 Olympic Games in Tokyo. She is hoping to improve enough over the next few months to qualify.

To that end, she’s been training six days a week in Charlottesville with UVA track and field assistant coach Mario Wilson.

Qualifying will be extremely tough. Guy has no sponsors – she’s currently supporting herself through babysitting and a part-time pole vault coaching position at Woodberry Forest – and needs to improve her personal best of 14 feet, 9 inches by roughly eight inches in order to be more competitive with the best pole vaulters in the country and have a chance at making it to Japan.

However, Guy said she has been encouraged by how far she has already come under Wilson’s tutelage.

Since arriving at UVA in 2015, she has improved by more than two feet.

Wilson has Guy focusing on her technique. “I think it’s slowly working,” she said, “but the pole vault is a process.” 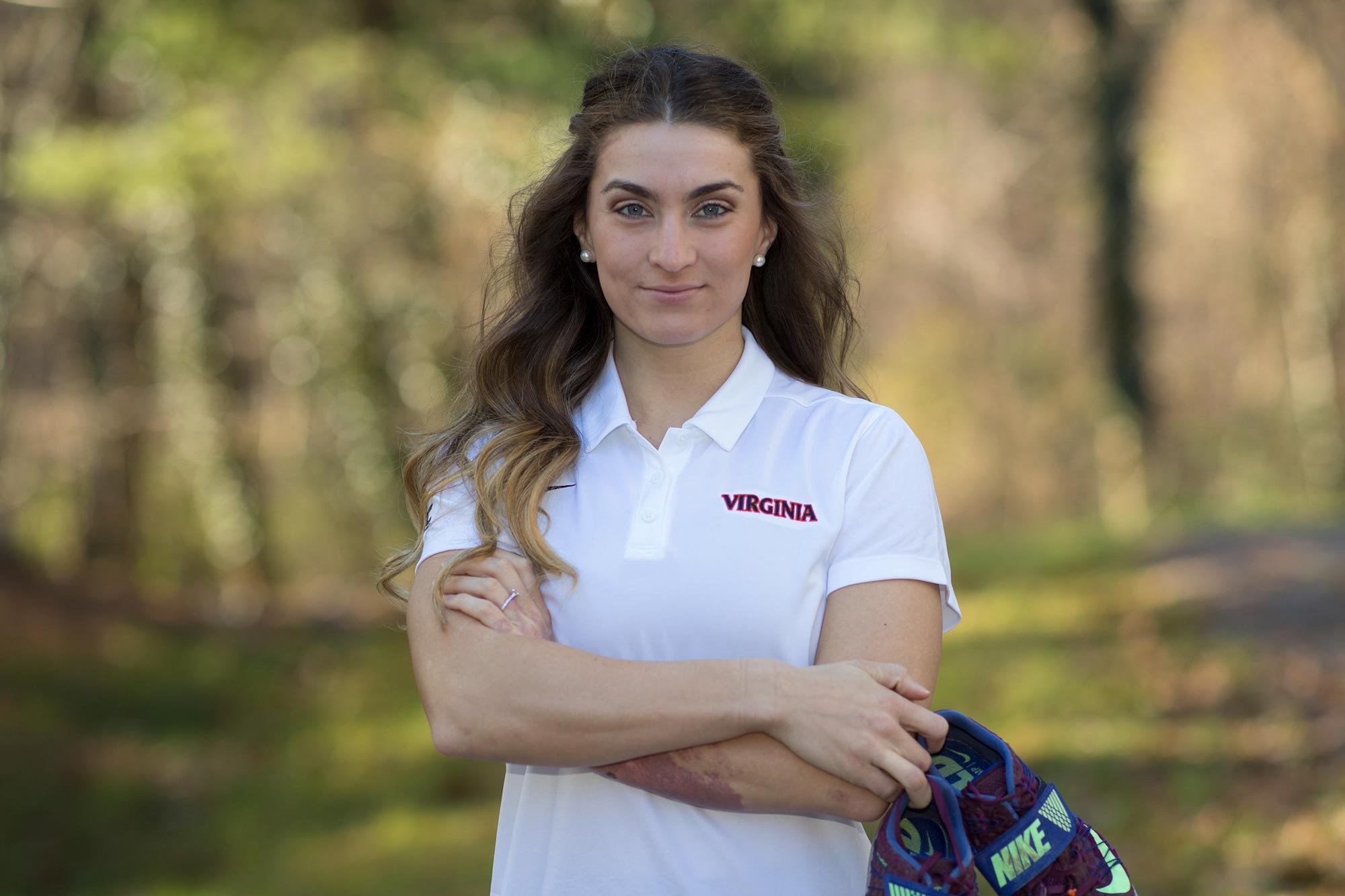 Growing up in Greensburg, Pennsylvania, Guy was a gymnast. She sometimes thought to herself how amazing it would be to make the Olympics in that sport.

But when she was in seventh grade, at the suggestion of a coach who thought she had a great combination of strength and agility, she gave pole vaulting a try.

Although she was a bit scared the first time she tried it, Guy liked it.

Most of all, Guy liked the challenge. “Pole vault is weird because every time you jump in a meet, you’re ending on failure,” Guy said. “You might hit a [personal record], but then the bar goes up to the next height and you end on three misses. It kind of hooks you because you have to keep trying to get that next bar.

When she got to high school, Guy quit gymnastics to focus on the pole vault.

“I didn’t jump anything spectacular my freshman or sophomore year,” Guy said, “but then once I got to be a junior I jumped 12 feet, then 12-1, then 12-3, and I just started climbing.

“It became clear to me that maybe I could go to college or get recruited for this.”

“Coach Wilson took a chance on me back when I was a little tiny high-schooler and only jumping 12-6,” Guy said. “He’s shown me the ropes on how to do things and how to compete and how to fight for what I deserve in the sport and to chase my dream, not give up. He believes in it just as much as I do and I think that’s important to have. I’m super grateful for it.”

A member of the All-ACC Academic Team and ACC Honor Roll, Guy said prioritizing and scheduling was the key to her academic success.

“The spare time that you have you really need to figure out what needs to be done first. What can wait until tomorrow?” she said. “That’s kind of how I worked my school week and I just tried to work ahead when I could. But then I tried to remember, ‘You have to have a life, too.’ I didn’t want to be just somebody who just trained and did school and did nothing else – and I wasn’t.

“There are days when you just want to get your homework done and go to bed, but it’s important to find a social balance I think for your mental health. Life’s too short to just grind, grind, grind all the time. It’s all about balance. Sometimes you just can’t do everything.” 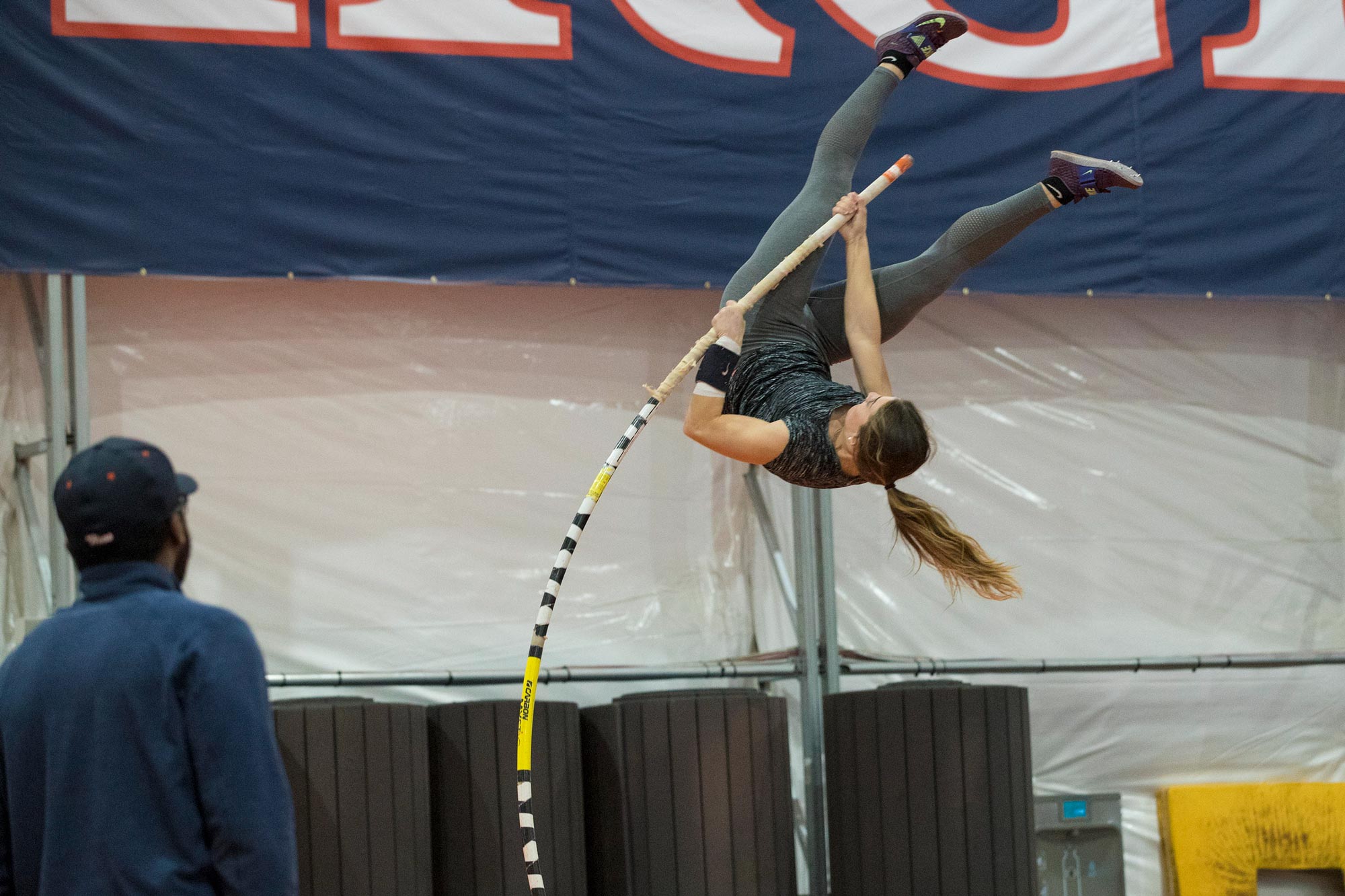 One of the things Guy cherished most about her time at UVA was the experience she had while pursuing a master’s degree at the Curry School of Education and Human Development.

“I had genuine relationships with my teachers,” she said. “They supported me in my meets – they came to the ACC Championship. They’re small things that really mean something to me.”

Under the guidance of Senior Associate Dean Justin Thompson, Guy did an independent study course that focused on autism. “I wanted to see how autism could be viewed as a diversity instead of just a disability,” Guy said.

Specifically, Guy and Thompson worked together to discover how research universities serve students who are on the autism spectrum.

“Her discipline, intellectual curiosity and a closely held desire to improve learning conditions for students of all backgrounds and abilities are a remarkable combination,” Thompson said. “Institutions of higher education across the nation would do well to adopt the recommendations she made, especially recommendations for admission, orientation and transition from high school to college.”

Now, Guy – whom Wilson refers to as a “once-in-a-generation-type athlete” – is using that same drive to chase her Olympic dream.

The Olympic Trials are in June. Can Guy do it?

“I think that’s the $50 million question,” Wilson said. “Time is the biggest factor. She runs very well; she’s one of the fastest pole vaulters in the world. She’s very determined. She’s very strong.

“It’s the skill acquisition that will be the deciding factor. She has to continue to improve how she uses that energy, how well she swings and her patience on the pole.”

While she didn’t triumph in last summer’s U.S. Championships, the event gave Guy confidence that she has what it takes to compete against the best in the world.

“I think that was the final boost for me to say to myself, ‘You’re not that far off; you’re right there,’” she said. “That just kind of solidified it for me. It was like, ‘Why not go for it?’ I know in my gut that I’m not tapped out yet.”

Whether she makes it to Tokyo or not, Wilson – in thinking back to that meet in Italy last summer, when Guy lent Campos her pole – said Guy has left her mark.

“She’s salt of the earth, just an incredible human being,” he said. “She was raised right and just values all the right things. She’s a true representative of what you want in a student-athlete.”