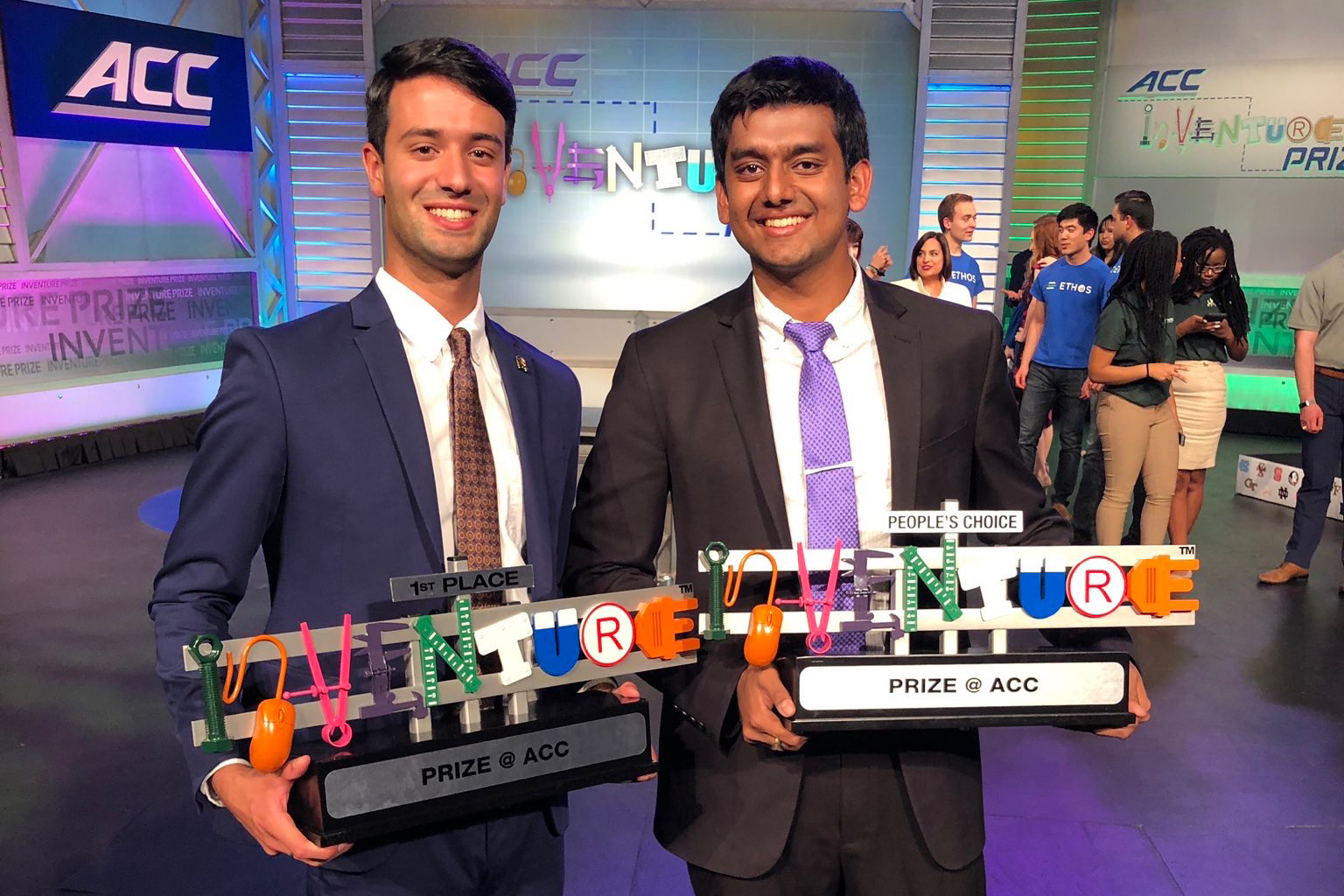 For the third consecutive year, a team from the University of Virginia School of Engineering has won the Atlantic Coast Conference’s top prize for undergraduate entrepreneurs, the ACC InVenture Prize.

“It was incredible!” said Rustagi, describing the experience of competing on live TV. “We were so nervous backstage while they were preparing us for the camera, but as soon as we were on stage, we were ready. We remembered all of our mentors, family and friends supporting us and delivered the best we could. Everything paid off, and we were so happy to continue the winning legacy UVA has established. Hoos don’t lose!”

Singh was inspired to create MIST when his younger brother underwent spinal fusion surgery for scoliosis two years ago. After years of bracing failed to correct his brother’s scoliosis – a curvature of the spine that can become debilitating – Singh witnessed firsthand the long recovery from an invasive and painful surgery.

Now, the company he and his colleague created is pursuing two approaches to improve the care of children with scoliosis, using two different forms of technology.

MIST has a patent pending on ThIRA, or Thoracolumbar Interbody ReAlignment, a system in which a single disc replacement corrects the curve. ThIRA is an implant made of elastomers that applies force to the spine in the opposite direction of the curve, helping it to grow straight.

The company also recently announced it is developing a software package to help physicians screen patients for scoliosis, leading to earlier, less-invasive intervention.

“It uses our proprietary image analysis algorithm to predict curve growth and post-adolescence curvature,” Singh said. “So far, the algorithm has an 85 percent success rate, and we’re working on incorporating machine learning to improve that rate.”

MIST’s idea is for physicians to use the two approaches in conjunction with each other, Singh said.

“Essentially, the software can predict the amount of scoliosis, and if the predicted amount is above a threshold, the surgeon could use our ThIRA implant to perform the surgery,” he said.

UVA engineering students  have been a force in the ACC competition since its inception in 2016. Contraline, a company started by UVA students and faculty developing the first long-lasting, reversible contraceptive for men, won second place in 2016. In 2017, AgroSpheres, based on a bioengineering technique for removing pesticide residue from crops, took first place. InMedBio won the first-place InVenture Prize and the People’s Choice Award last year for an innovative wound dressing designed to prevent infections and accelerate healing.

One thing all the winning teams have in common is heavy involvement in the Department of Engineering and Society’s entrepreneurship and business programs.

“Engineering and Society at UVA deliberately cultivates a community where students are not only supported in the entrepreneurial projects they pursue alongside their studies, but also are surrounded by like-minded innovators who inspire and learn from one another,” W. Bernard Carlson, professor and chair of the department, said. “But it is the students like Alex and Rohit who take what we give them and turn their ideas into innovative products and services that make this a better world in which to live.

“Previous winners of the InVenture Prize are now running companies that are solving vexing problems, from treating wounds that are difficult to heal to producing food using more environmentally sound methods. I am so proud of Alex and Rohit for the job they have done on MIST, and I am not at all surprised that they won another trophy for UVA.”

Like Ashwinraj Karthikeyan, InMedBio founder and a 2018 aerospace engineering graduate, Singh and Rustagi also were selected for the Pike Engineering Entrepreneurship Fellows Program. The fellowship provides funding and coaching that helps student teams move ideas from conception to ventures ready for investment funding. MIST will compete against five other Pike teams on Monday for the $50,000 Pike Award for Innovation and Entrepreneurship.

UVA Engineering Executive Dean Pamela M. Norris said UVA’s track record for student entrepreneurs shows the Engineering School is succeeding in its mission to produce leaders who will help solve the difficult challenges the world faces in the 21st century.

“UVA Engineering students are some of the most talented young people in our country, and they are full of ideas for making a positive impact on society. I am very proud that our faculty and staff are so effective at helping students turn their ideas into marketable technologies that will contribute to a strong economy and a better quality of life.”

What it Means to Be a Cavalier Baseball Player END_OF_DOCUMENT_TOKEN_TO_BE_REPLACED