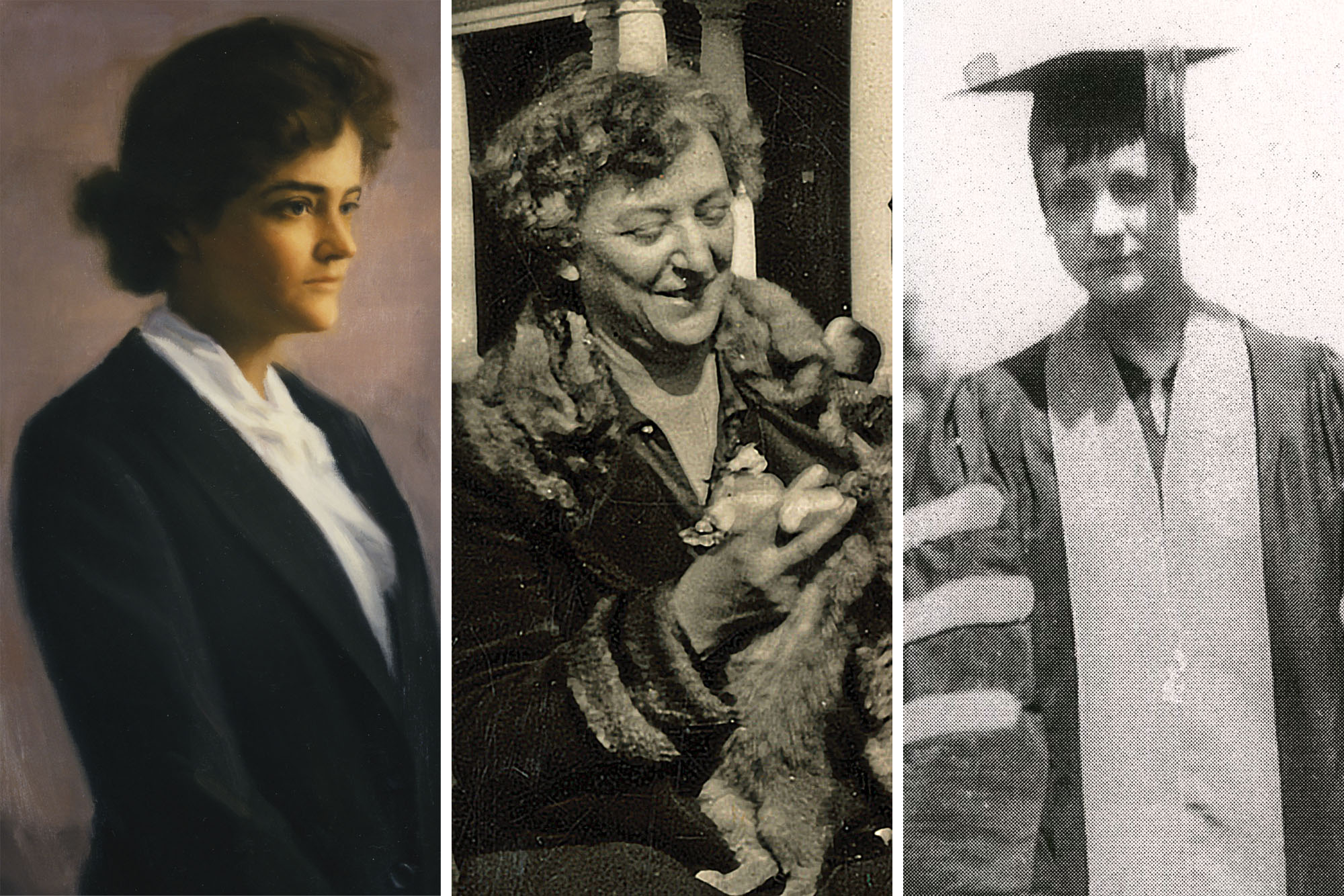 The decision to admit women to study at the University of Virginia School of Law had nothing to do with administrators’ belief in equality. Instead, their hand was forced by intense social pressure, which reached an apex after women became enfranchised in 1920.

But after the Law School accepted Elizabeth Tompkins, Rose May Davis and Catherine Lipop as students, Virginia Law and its dean recognized that women could hold their own alongside their male peers, and at times even surpass them.

This was at odds with a belief held by many that women weren’t naturally as qualified as men to perform the lawyer’s role. The dichotomy was reflected in Dean William Minor Lile’s comments over the course of the women’s time at the Law School.

“The most important change in the organization of the Law School has been the admission of women for the first time in its history,” Lile stated in his Jan 1, 1920, annual report to UVA President Edwin A. Alderman. “The President is familiar with the circumstances which brought about this radical departure from the traditional policies of the University, as well as with the conditions under which these new and strange beings are admitted to the different departments, so I do not rehearse them here. The result is that three women are registered in the Law School this session, two as regular students and candidates for graduation, and one as a special student. Perhaps they are entitled to be immortalized by naming them in this report.”

The circumstances to which Lile referred involved, at least in part, a persuasive letter from activist Mary-Cooke Branch Munford, the first woman to sit on the Board of Visitors at the College of William & Mary. (She was among those who were instrumental in that school opening its doors to women in 1918, and became a member of the UVA Board of Visitors in 1926.) 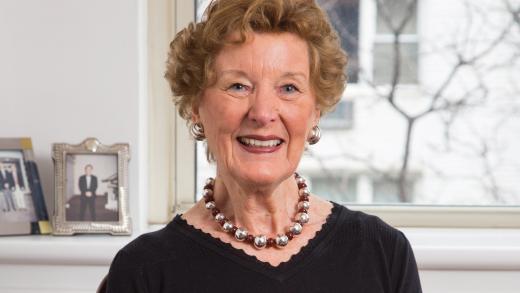 According to Board of Visitors minutes, the all-male board put the letter in the middle of the conference table to pause and contemplate.

Women soon were allowed into the Law School under new rules, which varied slightly from the other University professional schools and master’s programs. Women had to be white and at least 22 years old, or 23 if a “Special Student” (meaning not degree-seeking), and be able to fulfill all the requirements expected of the men.

In fact, the requirements were more stringent than those for male law students. An undergraduate degree was preferred for women applicants, but at least two years of college work was required –in order to demonstrate they were serious students.

Tompkins had received her master’s in history from Columbia University in New York, and Davis her bachelor’s from Trinity College in Norfolk.

Lipop, the special student, was already serving as the law librarian.

The dean’s report was positive about the women’s first semester. They were excelling grade-wise, and “there has been no perceptible protest against the presence of these three on the part of the male students,” the dean reported.

He added, “I made occasion, at the very beginning, to appeal in their behalf to the chivalry of the young gentlemen of the several classes, and the response has been all that could be desired.”

Tompkins’ letters home to her father, a wealthy owner of a grain brokerage who had encouraged her to pursue law, cast some doubt on that chivalry. She longed to be able to converse after class about important matters of the law with her peers, but felt shut out; those discussions most often happened behind fraternity doors. She also feared engaging too much with the men socially, lest they perceive her as having the primary goal of seeking a husband. 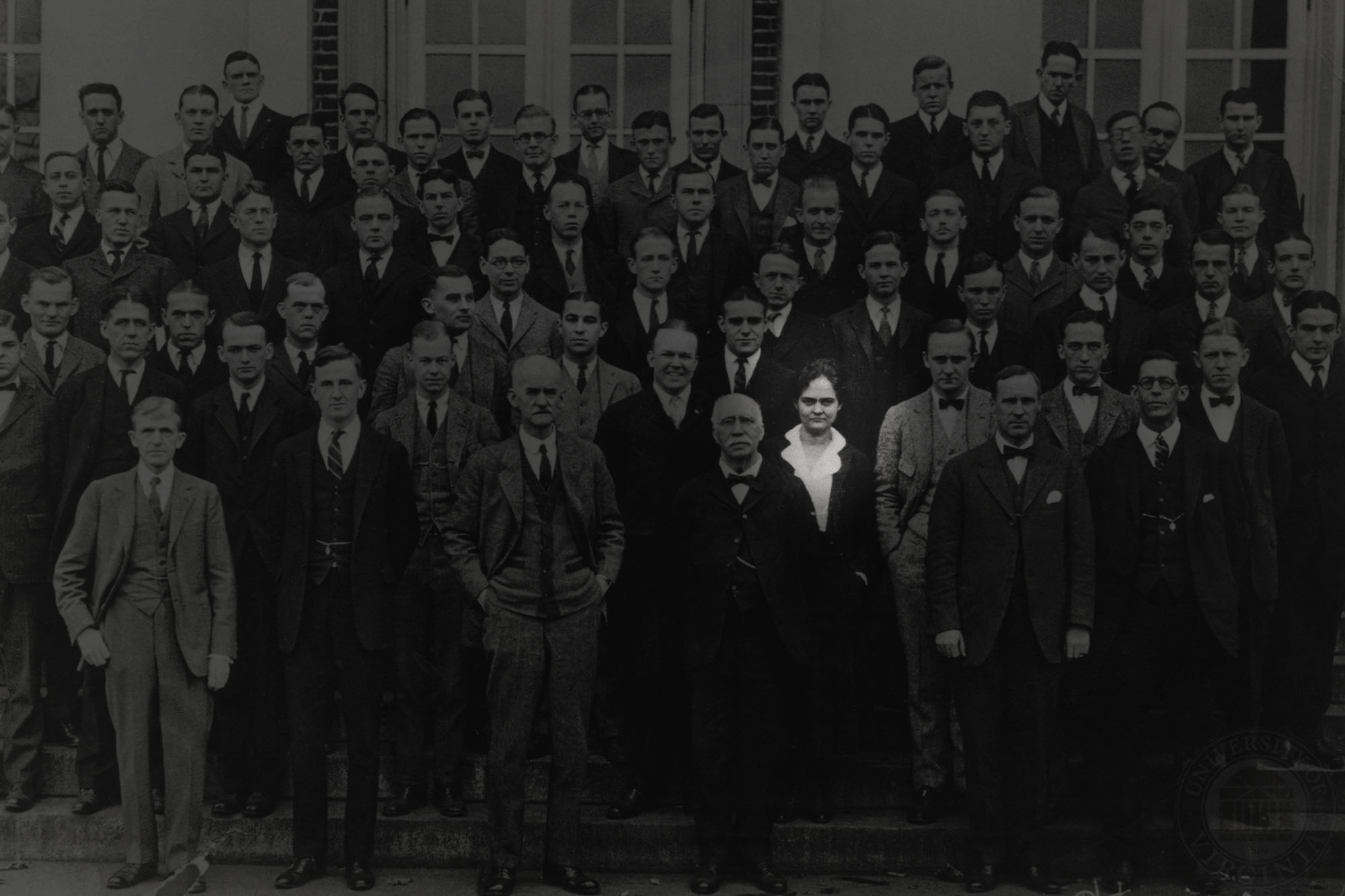 “In eight months I think I have gained the respect of the boys, or as many of them as are gentlemen,” she wrote in an April 22, 1921, letter to her dad. “They are beginning to know that I am not after them, and that they have nothing that I want.”

In June of that same year, Lile addressed law alumni during an event celebrating UVA’s centennial. While one might debate how tongue-in-cheek he intended the speech, it was at least telling of the intolerant mood surrounding the changes.

“When the information first came to your ears a year ago that we were preparing to open the doors of Jefferson’s masculine University to women – and admitting them even within the sacred precincts of the Law School – you doubtless wondered why, and recorded your mental, if not written, protest,” the dean said. “But it has been done – not because we of the Law School believed the law a fit profession for the mothers of the coming generations, but for the same reason that the gods gave the frogs a king – they clamored (I dare not say croaked) for it so vociferously. Voters as they now are (the women, not the frogs), their insistence and persistence – their crying aloud night and day without surcease – their strident threats of forcing their way in by the legislative door, and therefore on their own terms – convinced us that discretion was the better part of valor. We surrendered on very honorable terms, magnanimously dictated by ourselves.”

What was unfolding, then, was a social experiment in the eyes of Lile and others – undertaken reluctantly. How did the women ultimately fare, and what did they go on to do?

It’s worth noting that law students during the time period didn’t always graduate. Often they attended as much school as they felt they needed to advance their goals, and to this day, a law degree is not required to practice in Virginia.

Davis, who came from a family of lawyers, passed the bar after her second year of law school with a perfect score (as did Tompkins) and decided not to continue at UVA. She went into legal practice with her brother for a year before changing direction; she became the first woman to earn her Ph.D. in chemistry from Duke University, where she later taught, before joining the legal department of E.I. du Pont du Nemours (now known simply as DuPont). 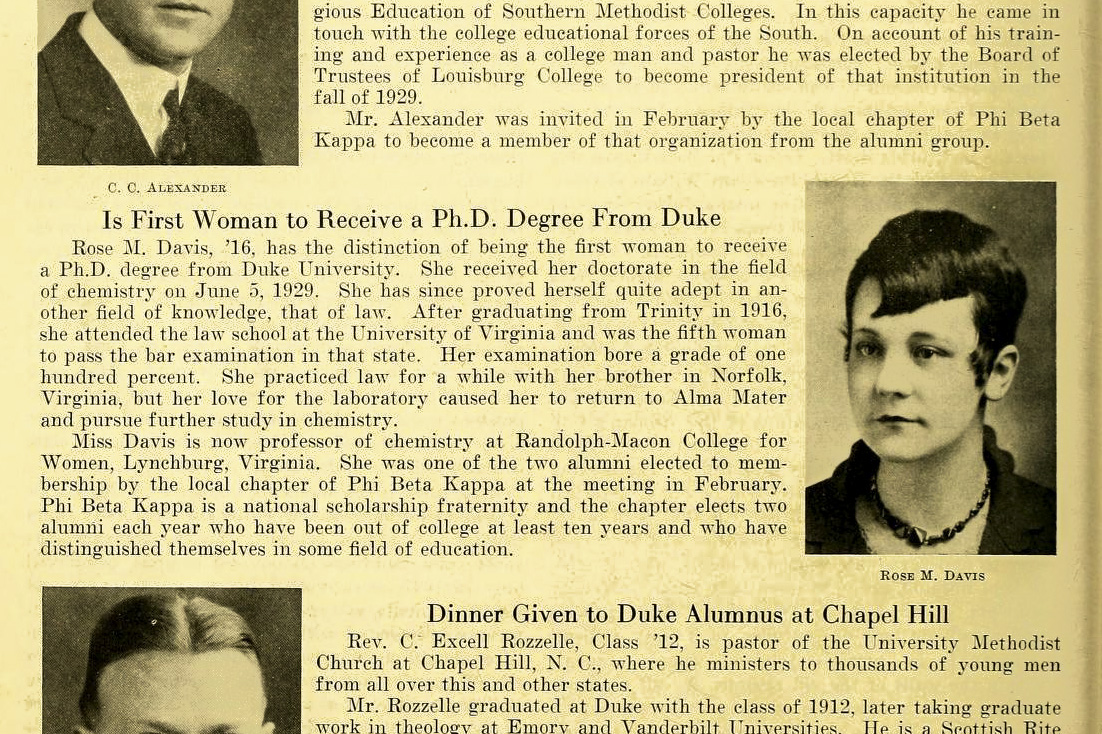 Rose May Davis passed the bar after her second year at UVA Law with a perfect score. She became the first woman to earn her Ph.D. in chemistry from Duke University, where she later taught. (Courtesy Duke University Archives)

Lipop, as the special student with more limited goals, no doubt used her legal education as law librarian, a role she held from 1912 to 1946. She was an early organizer of the library’s growing collection (once in the hands of faculty), having instituted the first card catalog. In 1925 she wed Charles Graves, a reportedly tough professor who had been vocally supportive of Tompkins, according to one of Tompkins’ letters, though he was not a proponent of full coeducation on Grounds.

For Tompkins, despite getting a perfect score on the bar exam and considering a transfer to the University of Richmond, where she hoped to take advantage of some practical training with a law firm, she decided to finish her coursework at UVA.

“Tompkins was an excellent student and forged ahead despite the harsh environment she experienced as a woman in her first semester,” Special Collections librarian Randi Flaherty said, referencing Tompkins’ letters. “She sought the honor of graduating from UVA Law, particularly as the first woman to receive such a degree from the school. But lack of available work also likely factored into her decision to stay.”

The Latin phrase means “a voice and nothing more.”

Yet it was clear in the dean’s subsequent comments and actions that some prejudices he may have harbored about women in the field could be dashed by examples of competency. In her third year at UVA, Tompkins invited attorney Mabel Willebrandt – then U.S. assistant attorney general – to visit.

“It was a success from beginning to end and actually ended in the triumph of the day when Mr. Lile asked her to speak to the law school assembled tomorrow morning!!!” Tompkins told her parents in a letter.

In eight months I think I have gained the respect of the boys, or as many of them as are gentlemen. They are beginning to know that I am not after them, and that they have nothing that I want. – Elizabeth Tompkins, 1921

Tompkins finished up law school in Charlottesville graduating at the top of her class. (Her obituary claims she “stood first in her class”; an oral history of another female law graduate, Margaret Gordon Seiler, indicated Tompkins was either first or second.)

The dean’s 1924 report to Alderman, in addition to noting that two new women had enrolled in the first-year class, gave the highest praise to Tompkins.

“As the first and only woman graduate of the Law School, her name deserves special mention here,” he wrote. “Her powers of acquisition and of appreciation of legal principles were fully equal to those of the men in the front rank of the graduation class.”

Later that year, as Tompkins struggled in her first job after law school at Duke, Duke & Gentry in Charlottesville, the dean acknowledged in a supportive letter “the ancient prejudice against women as legal practitioners,” offered to meet with her and suggested that she try opening her own practice if she couldn’t find “some [lawyer] friend who knows and appreciates your qualities and qualifications.”

While optimistic about her skills, Lile noted in his personal diary his belief that Tompkins’ future in the law would be short-lived. 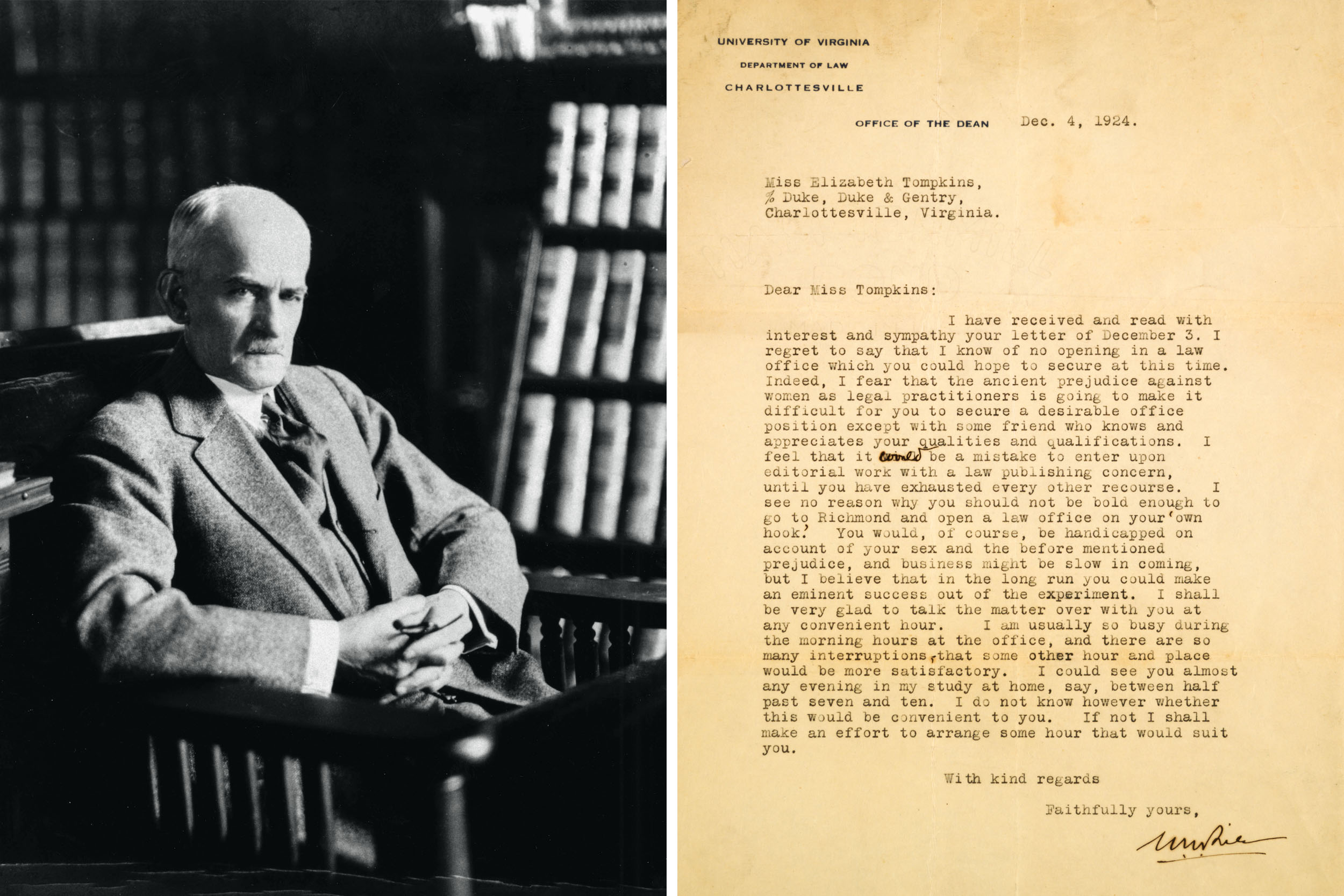 “I predict that in spite of her legal ability, however, it will not be long before she deserts the profession of the law and takes up that of wife & mother – rolling a baby carriage instead of wrangling in court – a much more suitable and seemly occupation for a woman,” he wrote as part of his reflections on 1923’s graduating class.

Though her path was challenging, Tompkins persevered. She practiced law for 54 years in Richmond. She specialized primarily in real estate law and estate planning, first with H. Carter Redd (an 1892 UVA Law graduate) and, later, with Carter L. Refo. She also served as commissioner of accounts for Hanover County and commissioner in chancery for circuit courts in Hanover and Richmond.

A member of the University of Richmond Board of Trustees from 1941 to 1971, she received an honorary doctor of laws degree from that school.

In addition, she was a member of Phi Beta Kappa, an honorary scholarship fraternity, and Tau Kappa Alpha, an honorary forensics society; helped start the Phi Delta Delta legal fraternity of women at the University of Richmond; and was a president of both the Westhampton College Alumnae Association and the Richmond Branch of the American Association of University Women.

Dubbed “the dean” of women lawyers in private practice by the Virginia State Bar in 1969, she retired in 1979, two years prior to her death at 83 due to a car accident. She never married.

“Any lawyer has to pass up plenty of good times,” she told the Times-Dispatch in 1936 for an article about women in the profession. “Chasing evidence, poring over record books, hunting title, and talking to witnesses – all this takes hard, exacting work and long hours. The actual appearance in court is only a small part of the lawyer’s work.” 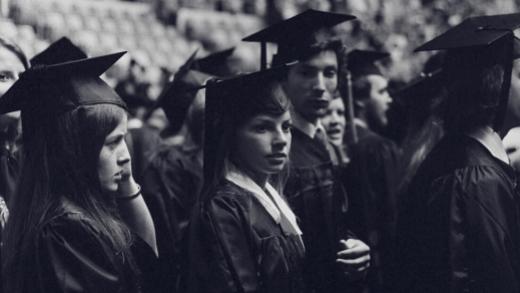 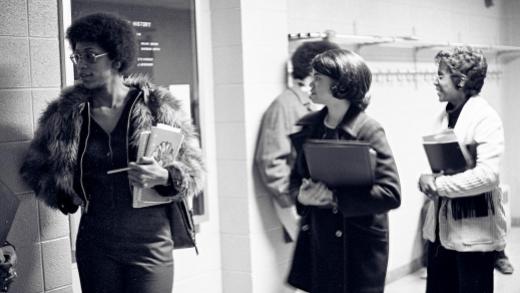 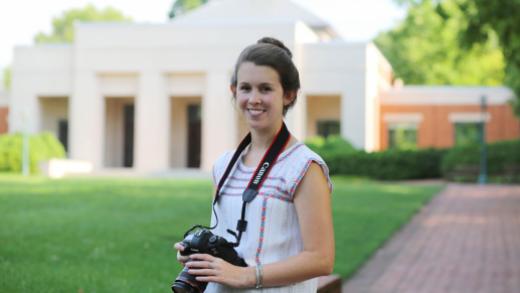 ‘Humans of UVA Law’ Wraps Up 5 Years of Storytelling; Relive Some of the Best Entries