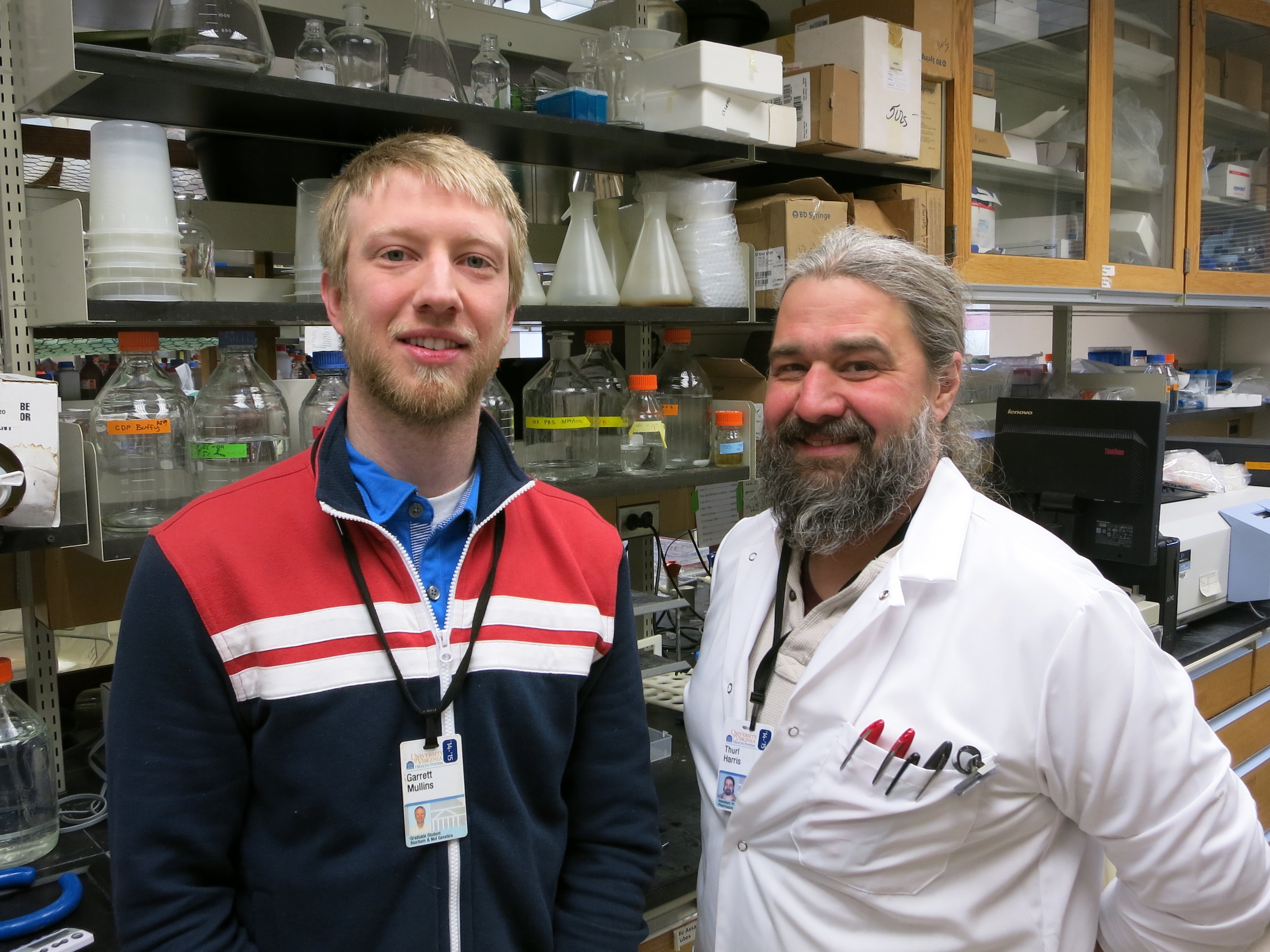 Medical researchers Garrett Mullins, left, and Thurl Harris found the mechanism by which constant stress can lead to type-2 diabetes.

New research from the University of Virginia School of Medicine has shed light on how chronic stress and obesity may contribute to type 2 diabetes. The findings point the finger at an unexpected biological perpetrator – the breakdown of fat.

The body releases adrenaline, the fight-or-flight hormone, to provide short-term energy to respond to stress – say, to help you avoid getting eaten by a hungry tiger or trampled by a frightened elephant. Adrenaline, and noradrenaline, prompt the body to break down fat to provide that energy.

But when the stress becomes chronic – when the body becomes convinced there’s always a tiger at the door – what was intended to be a short-term response becomes long-term. And the resulting breakdown of triglycerides, the U.Va. researchers found, plays a crucial role in inhibiting the body’s ability to use insulin correctly.

“This has a lot of implications for obesity and how obesity can, in turn, affect insulin signaling in cells – that is diabetes, ultimately,” said researcher Thurl E. Harris of the U.Va. Department of Pharmacology and U.Va.’s Center for Cell Signaling. “What my work was trying to understand is what sort of physiological conditions can inhibit insulin action in adipose tissue [fat], which is precisely what occurs during obesity-induced insulin resistance.”

The discovery answers questions that have plagued scientists for decades about how adrenaline causes insulin resistance. “It’s been known for probably 30 years if you infuse adrenaline into humans, you induce acute whole-body insulin resistance. The question has always been, ‘What are the mechanisms behind this adrenaline-induced insulin resistance?’” Harris said. “What we have found is the actual mechanism in adipocytes [fat cells] that may contribute to effects on the whole body, including the insulin-resistance that accompanies type 2 diabetes.”

The findings provide valuable insight into the causes of insulin resistance and may one day lead to new treatments for high blood sugar. “That’s where we’re headed with this: how obesity inhibits glucose homeostasis,” Harris said. “By inhibiting lipolysis [the breakdown of fat], maybe you can offset some of the aspects of obesity that are causing diabetes.”

At UVA, There Is a Club for Everyone END_OF_DOCUMENT_TOKEN_TO_BE_REPLACED