Huge Digital Project Maps Explosion of Print During the Enlightenment 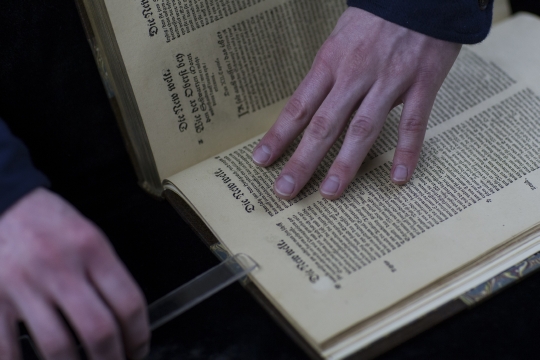 If the World Wide Web existed in the 18th century, how would the seminal work of German philosopher Immanuel Kant fare? Would there be lots of links to his work? Just a few?

These are the types of questions researchers at the University of Virginia hope to answer as they create a digital network of print materials created during the Enlightenment.

Experts at U.Va. are tracking footnotes and citations in works such as Kant’s to understand how ideas traveled during the 18th century, when thinkers in Europe began bucking traditional authority in favor of reason and individualism.

Between 1770 and 1800 in Germany, the sheer number of print volumes in existence more than doubled, and the researchers suspect that with the explosion of print came a proliferation of footnotes and citations, which had been around since at least the early 17th century.

“Our hunch is that footnotes increased, citations increased and our explanation of that would be, if this is in fact true, it’s because there was so much print that editors, publishers and authors had to start trying to make all of this print intelligible and navigable,” said Chad Wellmon, a Germanic languages and literatures associate professor. “Once you have that network of interconnected print, then you can start to trace how ideas flowed.”

The work being led by Wellmon and his colleague, assistant English professor Brad Pasanek, who are joined by a team of U.Va. faculty members from the College of Arts & Sciences and the School of Engineering and Applied Science, is part of a massive digitization project, the Global Literary Network. As they work to understand how ideas spread during the Enlightenment, scholars from other universities are doing the same dissection of print materials created during three other cultural epochs spread across geographical and historical spectra. Those are post-classical Islamic philosophy, Chinese women’s writings from the Ming-Qing dynasties, and the Anglo-Saxon Middle Ages.

Wellmon and Pasanek were invited to join the Global Literary Network project by Andrew Piper, a leading digital humanities scholar at Canada’s McGill University. The trio has enlisted engineering labs at the École de téchnologie supérieure of the University of Québec and the University of Groningen in the Netherlands to write algorithms and develop new technologies to track the footnotes and citations – first in German, and then in English and French.

“We want to create a World Wide Web of print for the 18th century – that’s the Holy Grail of this project,” Wellmon said. “We want to create a visual map with all of these nodes of all of these texts, pointing to one another, because then you could literally map 18th-century print and you could get a better sense of what nodes, what authors, what journals, what books were really the most important ones, because just like the World Wide Web, they would be the ones with the most incoming links.”

To describe how ideas traveled in print during the Enlightenment, Wellmon used the example of Kant’s famous essay, “What is Enlightenment?,” that he and Pasanek have written about in two related articles. He said if you look at citations embedded in the essay as originally published in 1784 in the Berlin Monthly, readers will see that Kant refers back to a piece published a year earlier.

“So if you go back to that journal, we saw he’s pointing to another page in that journal to a footnote where the question is literally, ‘What is Enlightenment?’ And that footnote refers back to another essay that was printed in the same journal six months before. So now we are three links removed from Kant,” he said. The web of ideas that is created, Wellmon said, gives a fuller understanding of the evolution of thought.

The new study is supported by U.Va.’s generous Global Programs of Distinction grant, which funds challenges of global scale, scope and concern. This is the second year the Center for Global Inquiry and Innovation has issued the grant.

“This project represents a critical moment in the advance of the humanities into the realm of broad-ranging and fine-grained digital textual analysis,” center director Brian Owensby said. “The ability to see into them and across linguistic and historical divides promises insights we can barely begin to imagine, raising the possibility of searching for something like an intellectual genome for human thought.”

The U.Va.-McGill team is having monthly Skype meetings with teams in the three other tracks to compare and analyze emerging results. Wellmon said all of the results, as well as all of the data sets, will be posted online and will be available to the public. He said the results could upend people’s notions of what was really authoritative knowledge during the Enlightenment.

What Is the ‘4th Side’? END_OF_DOCUMENT_TOKEN_TO_BE_REPLACED