Humble Service to UVA, Others – and a Beatles Song – Highlight Fall Convocation 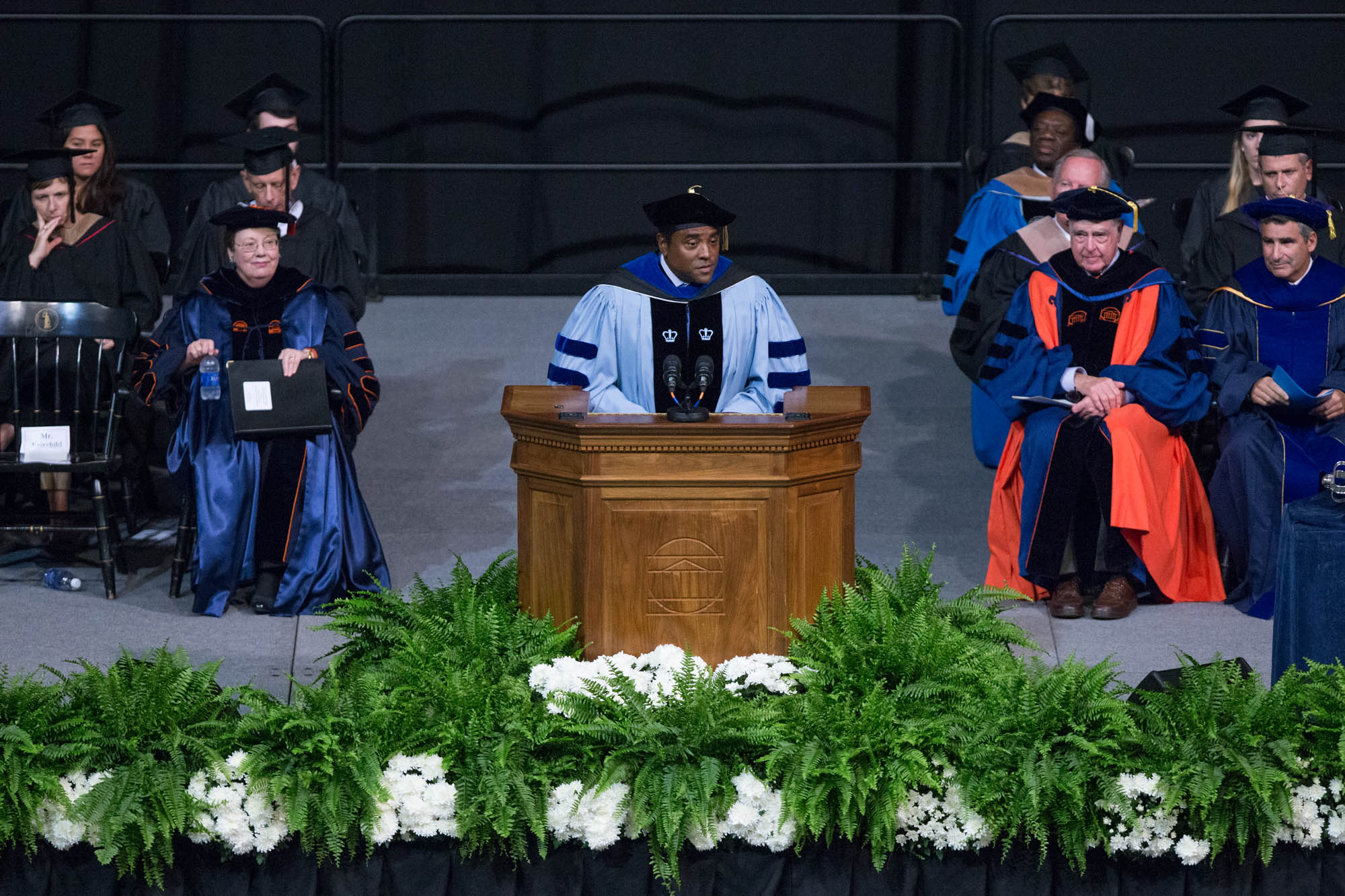 The ideals of dedication to the University of Virginia and service to others shone brightly Friday during Fall Convocation, the annual ceremony that honors two members of the faculty, recognizes high-achieving third-year students and marks the beginning of the annual Family Weekend.

The two outstanding faculty members – J. Milton Adams and Timothy D. Wilson – received the Thomas Jefferson Awards for their service and scholarship, respectively. Between them, they have spent more than 70 years on Grounds.

Also part of the event, the keynote speaker, Darden School of Business professor Gregory Fairchild, gave heartfelt and challenging advice – at one point breaking into song – to the 436 undergraduates who received Intermediate Honors for their academic achievement, being in the top 20 percent of their class after two years of study. 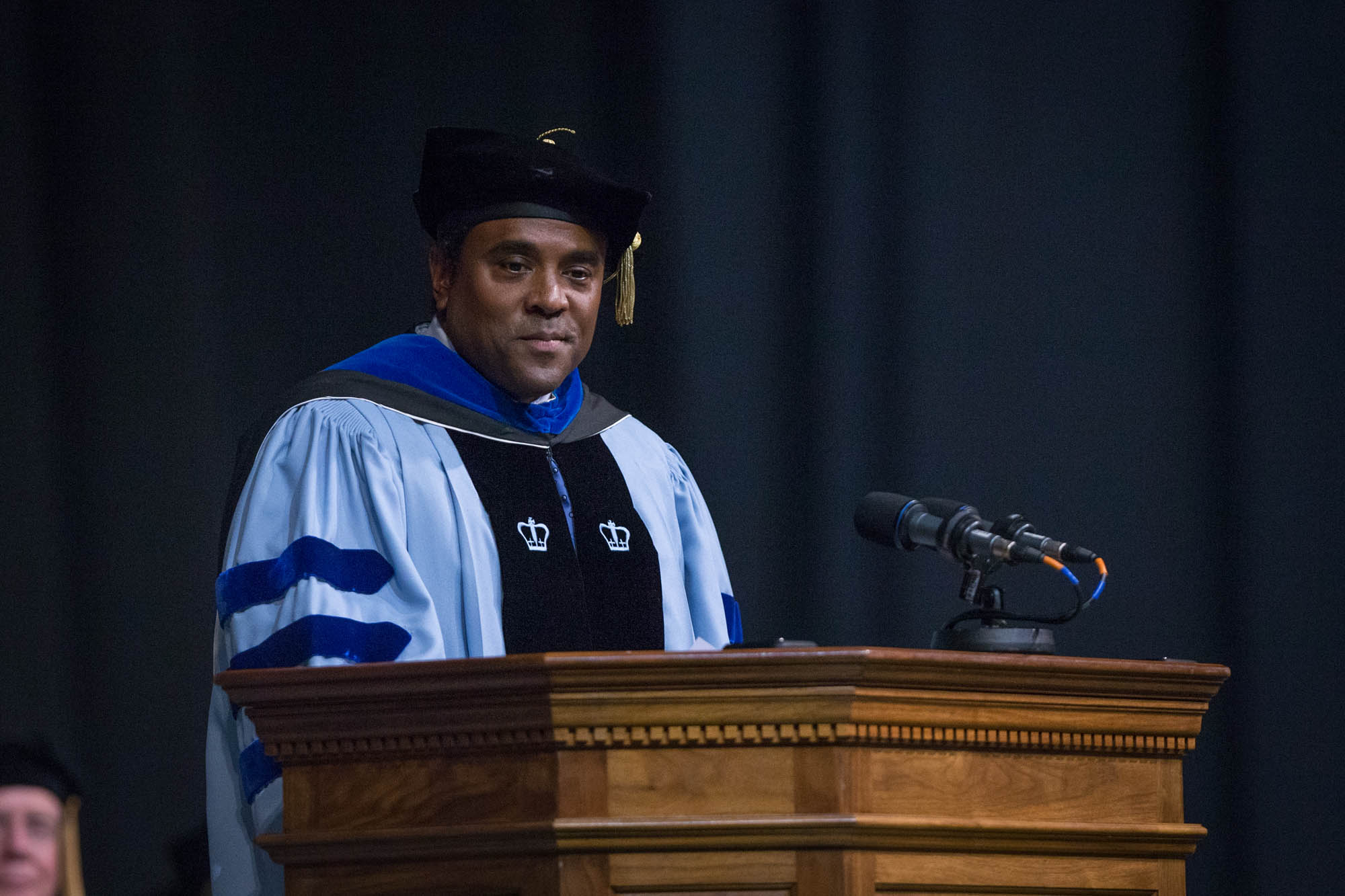 In his remarks, Fairchild, known for his research on entrepreneurship and emerging markets, challenged the recent trend that regards the value of education as an investment that primarily yields the external rewards of a prestigious job and high salary.

“Even though I work in a business school, I have some concerns about the education-to-get-a-job-and-salary mindset,” said Fairchild, the academic director of the Institute for Business in Society, which helps corporations, policymakers and business students generate positive social impact through business roles.

The federal government’s College Scorecard that compares colleges and universities, not only in terms of tuition and scholarships, but also by post-graduation salaries “is explicitly an investment mindset at play,” he said.

Fairchild mentioned the many people in students’ lives, especially parents and teachers, who invested their time and attention in enabling their academic success. He stressed the important things that job-and-salary measurements leave out about the distinctive experience of being part of the UVA community in its beautiful locale.

“When we focus on salary after graduation, we don’t account for the Lawn, or the beauty of the view from O-Hill. We forget about the importance of honor, or the professor who spent 45 minutes with you outside of class,” he said.

Fairchild also talked about the Darden Prison Program, in which he leads a group of M.B.A. students each year into local prisons to teach inmates entrepreneurship and prepare them to rejoin the business world. The effort is part of Resilience Education, an organization he founded with his wife and fellow Darden graduate, Tierney Temple Fairchild.

Prison inmates may not seem like a good example of individuals who are worth investing in, but despite the odds, they strive to better their lives, he said. Teaching offenders might not seem like a good investment either, but participating in the program has benefitted the student-teachers in their subsequent jobs, he added.

Fairchild encouraged the students not to wait until later in their lives to contribute to the improvement of society or philanthropy – those efforts are public goods, he said, and public goods are funded by many and enjoyed by many.

“In Old Cabell Hall hangs an inscription,” he continued, “‘You are here to enrich the world, and you impoverish yourself if you forget the errand.’ Woodrow Wilson, a UVA law alumnus, said those words in 1913.”

Another quality left out of the education-as-investment mindset is none other than love, he claimed. As he recited some of the lyrics of the Beatles song, “With a Little Help From My Friends,” he ended up singing:

“What would you think if I sang out of tune/ Would you stand up and walk out on me? …/ Oh I get by with a little help from my friends … / Do you need anybody?/ I need somebody to love.”

Riffing on those lines, he concluded, “We get by with a little help from our friends. Find somebody to love.”

The two Thomas Jefferson Award recipients certainly have invested a wealth of time, support and love to the University and to students.

Wilson, Sherrell J. Aston Professor of Psychology, was recognized with the Jefferson Award for excellence in scholarship. His nominators at UVA and elsewhere say he is “a giant in the field of behavioral sciences,” but after receiving his award, he said he shared it with his colleagues. “I celebrate this with them,” he said.

In presenting the award to Wilson, UVA President Teresa A. Sullivan said, “His years at the University have been marked not only by significant scholarly accomplishments, but also by an unstinting devotion to all of his students and by a remarkable commitment to service of the academic community, at the University and beyond.” 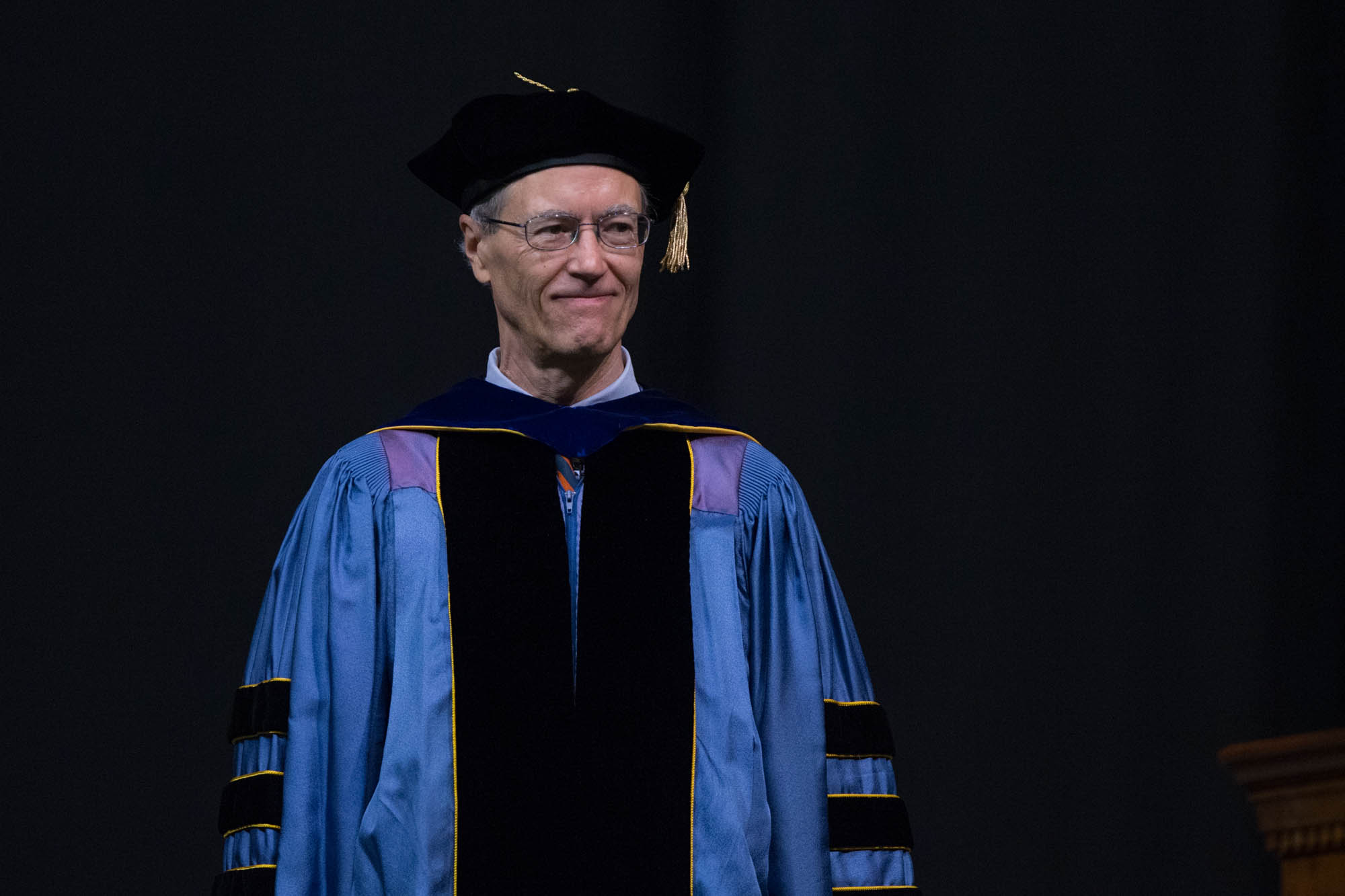 An All-University Outstanding Teaching Award winner in 2001, Wilson teaches “Introduction to Social Psychology,” which enrolls 350 students and typically has a waitlist of 150 students. He has been known to ride his bicycle through a snowstorm to visit a colleague’s class to discuss his research.

Three of his mentees wrote in their nomination letter, “He has gone well above and beyond the call of duty to support the careers of countless young scholars, including graduate students and junior faculty.”

A fellow of the American Association for the Advancement of Science and of the American Academy of Arts and Sciences, Wilson has published several ground-breaking studies, including the book, “Strangers to Ourselves: Discovering the Adaptive Unconscious,” which was cited by the New York Times Magazine as one of the 100 best ideas of 2002.

That research explored the nature and limits of self-knowledge, showing that people can be remarkably blind to cues that have affected their judgments and behavior.

In his January book, “Redirect: The Surprising New Science of Psychological Change,” he describes the idea that people generally have personal stories about who they are and what the world is like, but aren’t conscious of them or how they tend to guide the way people live their lives. These stories can be optimistic and positive or pessimistic and self-defeating. Wilson suggests several simple, well-researched techniques for helping people revise those narratives that are self-defeating.

Colleagues and former mentees who nominated him remarked on his sincerity and humility. One remembered hearing someone call Wilson “the Jimmy Stewart of social psychology,” saying that “in addition to being remarkably tall and talented, he is also unfailingly decent, generous, fair-minded and beloved.” 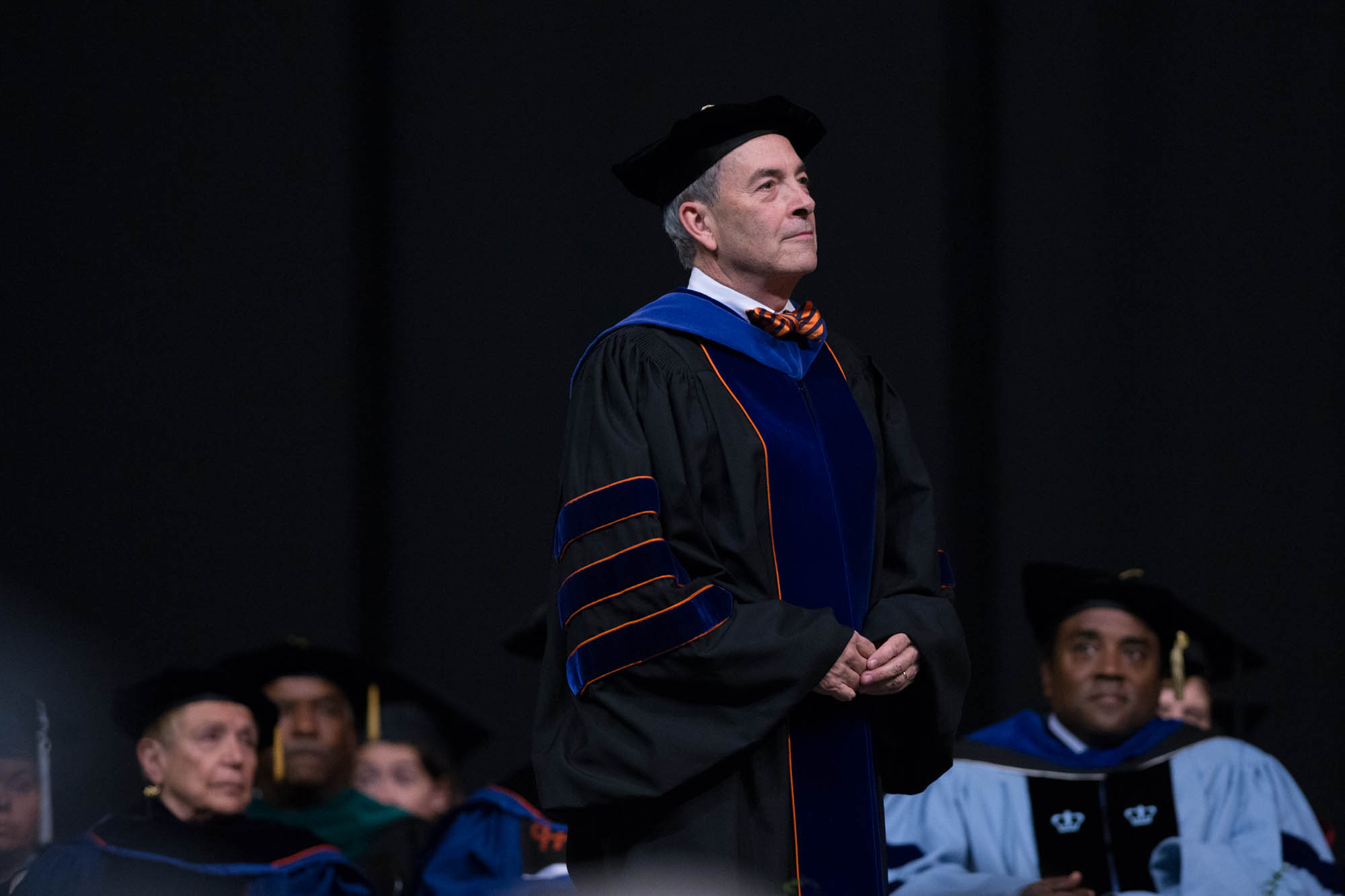 Those who nominated Adams for the Jefferson Award for Service also repeatedly mentioned his humility, despite his many accomplishments on Grounds. Over the years, he has held various administrative roles, from serving as associate dean for academic programs in the School of Engineering and Applied Science to his current role as senior vice provost, leading UVA’s strategic planning process.

He has been part of every major planning effort in recent times and helped launch many of the University’s signature programs for students, from the January Term to the Jefferson Public Citizens Program, the academic service program in which students learn about effective service practices, research design and implementation of research service projects.

“Adams has served the University as a superb teacher, researcher and administrator,” Sullivan said. “In all of this activity, he has continually shown that students and the broader University come first in his mind. He has led or been instrumental in creating numerous University programs, with collegial leadership and without seeking personal recognition.”

Adams, who earned his Ph.D. in biomedical engineering from UVA in 1976 and returned to join the faculty in 1978, was the driving force behind the Commonwealth Graduate Engineering Program, a partnership among Virginia’s leading universities that began in 1983 to offer Master of Engineering degrees to qualified engineers throughout the state, and in developing the Bachelor of Interdisciplinary Studies degree-completion program in UVA’s School of Continuing and Professional Studies, which graduated its first non-traditional students in 2002.

In 2007, he was responsible for carrying out the University’s Quality Enhancement Plan, which he titled “Enhancing Student Faculty Engagement,” a plan required by UVA’s accreditation body, the Southern Association of Colleges and Schools.

“Milton made improving the student experience at UVA a priority,” one nominator wrote. “As vice provost for academic programs, he oversaw the [University Seminar] program and carefully solicited applications and selected instructors to teach the first-year courses.”

Over the years while behind the scenes, Adams has continued to put himself in front of the classroom, continuing to teach. His “Physiology” class in the Department of Biomedical Engineering has a reputation of being one of the best courses in the Engineering School. In addition, he still accepts a full load of academic advisees annually.

He called receiving the Thomas Jefferson Award “an honor of unimaginable proportion,” but stressed that none of the countless projects he’s worked on could’ve happened without the many other people involved. “I’m grateful on behalf of all of them,” he said.

A Year We Will Never Forget: 2019-20 in Review END_OF_DOCUMENT_TOKEN_TO_BE_REPLACED

‘What Will You Carry With You?’ Remarks From UVA President Jim Ryan END_OF_DOCUMENT_TOKEN_TO_BE_REPLACED