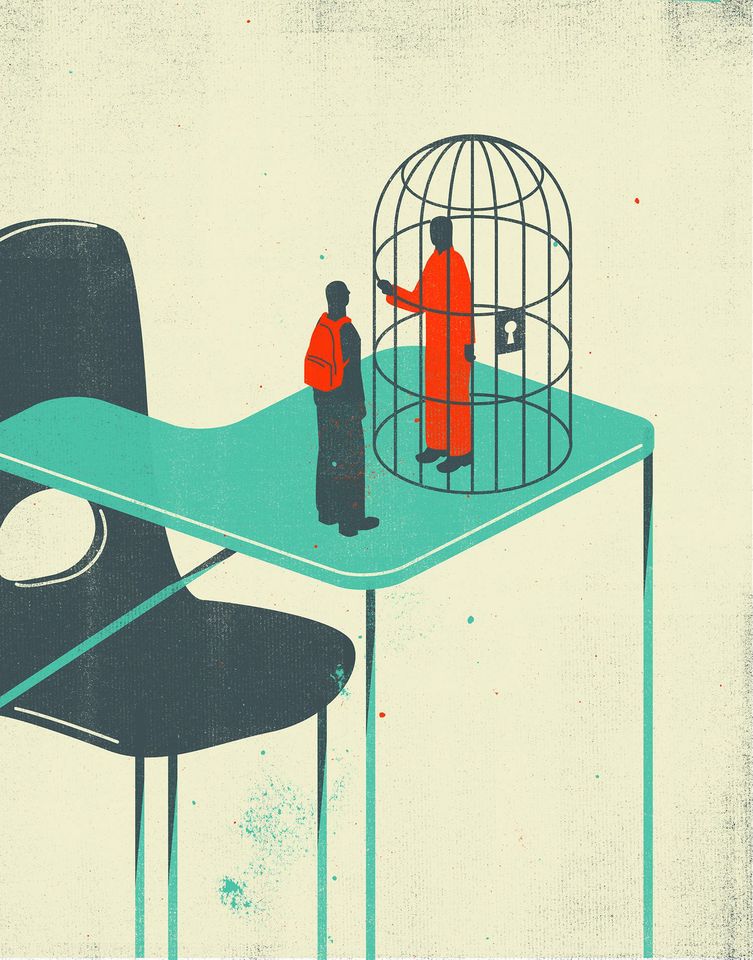 Reprinted from the Fall/Winter 2012 edition of The Darden Report.

In fewer than 18 months, inmate Kirk Smith will be released from the Dillwyn Correctional Center in Buckingham County, Virginia, having completed his sentence of more than 20 years.

Smith admits he’s anxious about his employment prospects beyond the prison walls. He knows jobs are scarce, and jobs for convicted felons are even scarcer. He also knows that former convicts need jobs to stay out of prison.

But he carries a new skill set that is potentially a game-changer. He’s been trained as an entrepreneur through an innovative program offered by the University of Virginia Darden School of Business.

Smith, wearing prison blues – blue jeans and a light-blue cotton shirt – presents his detailed business plan to his classmates. His concept is to launch a custom painting business once he is released.

“I’m still scared,” said Smith. “At times, I was pulling my hair out. But now I have more confidence. Now I believe I can start this business. I know I would have failed miserably without this class.”

“I believe people can change,” said Fairchild, who plans to teach similar courses at other prisons in Virginia in addition to Dillwyn. “I believe educational institutions can make a big difference. This is a world-class university and a world-class business school, and developing leaders to improve society is our stock-in-trade. We usually get the most prepared, the most advantaged students. I believe we can use our skills to teach the least prepared and the least advantaged. I believe this is possible.”

In a high-ceilinged classroom deep in the heart of Dillwyn Correctional Center, a medium-security prison housing more than 1,000 inmates, 13 convicted men are learning about entrepreneurship. The classroom is clean and well-organized. Narrow, glazed windows permit minimal daylight to flow into the room. Inspirational quotations on poster boards are taped to the room’s cinderblock walls. “Be the man by being employed,” one reads. “Manage the money,” declares another. “Take care of family.”

The squat, concrete-walled prison is ringed by high fences, razor wire and guard towers. It’s located a few miles north of rural Dillwyn, the town for which it is named.

The offenders, as they’re called by the Virginia Department of Corrections, range in age from mid-20s to mid-50s. Two earned college degrees. All of them are well-spoken and focused. All of them have committed serious crimes, ranging from robbery to burglary to murder. All of them also have entrepreneurial dreams.

“I want to change the stigma surrounding offenders,” said Boyd. “If you start your own firm, you put yourself in the position to help someone else.”

A Career Built on Helping the  Disenfranchised

Fairchild is well-suited to teach these men, some of whom struggled in school, especially with math – a key skill for business people.

With a Ph.D. in management from Columbia University, Fairchild has made a career of helping the disenfranchised. “All of my work is oriented toward outreach,” he explained. He’s researched how banks support low-income clients. He’s traveled to Haiti to create a business plan to operate a health clinic and trade school. He’s taught classes in New Orleans on how to help rebuild the city.

“I like to teach in places that are tough, with people who people think are tough,” Fairchild said. His motivation is also personal. Some of his friends and cousins have had “their lives upended” by prison and jail sentences.

Fairchild teaches entrepreneurship at Darden, in addition to ethics and business strategy. He is also academic director of the Initiative for Business in Society, which prepares leaders to make a positive impact on society through business.

Fairchild was instrumental in creating the Tayloe Murphy Resilience Awards at Darden, which are organized by IBiS. The awards recognize Virginia companies in low-income areas that – despite the odds stacked against them – have managed to thrive and uplift their communities.

Fairchild established the prison entrepreneurship initiative in 2011 after an inspirational conversation with Darden Dean Robert F. Bruner. Bruner had received a letter from an offender at the Pocahontas State Correctional Center in Southwest Virginia, asking for help finding a job after his release.

“The inmate’s boldness in reaching out to Darden for help caught my attention,” said Bruner. “Darden has long lines of applicants and executives seeking to study here, most of whom are lucky and/or able to negotiate the opportunities and challenges that society presents. So here was someone who had taken a very different path in life.

“Given the high and rising demands on our school, it would have been easy to decline the request,” Bruner added. “Fortunately, our faculty and staff are receptive to unusual opportunities and oriented toward servant leadership. Fairchild, who is interested in the economic development of disadvantaged communities and conveying the ideas behind business and entrepreneurship to a general audience, ran with the idea.”

Fairchild created a groundbreaking proposal, the “Prisoner Reentry Training Program,” for which the University of Virginia Mead Advisory Committee gave him the John Colley Award. Each year, the award honors and funds the “Dream Idea” of a Darden professor.

Turning a Dream Into Reality

Fairchild began reading about the history of prisons, with a focus on ones located in Virginia. Serendipitously, he also read a story from Bloomberg Businessweek about Texas’ Prison Entrepreneurship Program. Based at the Cleveland Correctional Facility in Houston, it was founded eight years ago and now receives more than 2,000 applicants each year. Approximately 800 inmates graduate from the program annually. So far, these graduates have founded 106 businesses, one of which brings in more than $1 million of revenue each year. The recidivism rate of those graduating from the Texas program is just 5 percent, versus 25 percent statewide.

Fairchild and five of his second-year Darden MBA students trekked to Texas to learn firsthand about the innovative initiative – the only one of its kind in the country. “We came back armed with that knowledge and started to design our own program,” said Fairchild.

“Put It in the Plan”

Fairchild is relaxed but straightforward with his inmate students. That they like their professor is obvious. In one class, Demon Gunter touts the business plan for his proposed company, “Move Around Movers.”

But the classroom consensus is that Gunter’s plan is too vague. His classmates note that his prices are below industry standards. Fairchild points out another problem: Although Gunter has extensive knowledge of and experience in the moving industry – having worked in the field for many years – this doesn’t show in his business plan. “Put it in the plan,” Fairchild advises Gunter. “You have to tell people what you know. That way, the reader of the plan knows you know.” Gunter agrees with all of the suggestions.

The students say they are bent on succeeding. “Everybody feels good about this,” said Fairchild. “Everybody has good feelings, from the guys in the room to the folks at the Department of Corrections in Richmond. What we don’t know is how many will pass the ultimate test.”

That test is this: How many of the inmates will stay out of prison? The answer may take at least three years to materialize, according to Fairchild. Will any or most of his students be behind bars by then? For his part, Fairchild has faith that his inmate students can make it in the business world.

The Future Beyond Bars

Fairchild’s Darden students agree. At the end of the class, Fairchild asked his student teachers to write about their experiences. Mark Lund, who taught finance and math-based case studies at the prison, surprised himself with his discovery. “From the time I walked into the Dillwyn facility to now, my perception of American prisons has completely changed,” he admitted. “If you had asked me whether I would have hired someone with a criminal record last year, I probably would have said ‘no.’ This experience has opened my eyes to the potential people have when they truly commit to turning their lives around.”

Fairchild has high hopes for the future of the program. He plans to continue it at Dillwyn and expanded it in fall 2012 to the Fluvanna Correctional Center for Women in Fluvanna County, which houses more than 1,200 female inmates.

The first program concluded in August, and soon the test of real life will begin for many of the inmates who participated. Can the prisoners transform their lives through entrepreneurship education and human courage? Can they beat the odds stacked against them? “Theirs will be a true test of resilience,” acknowledged Fairchild.

In Memoriam: Life of Drama Professor To Be Honored Sunday END_OF_DOCUMENT_TOKEN_TO_BE_REPLACED