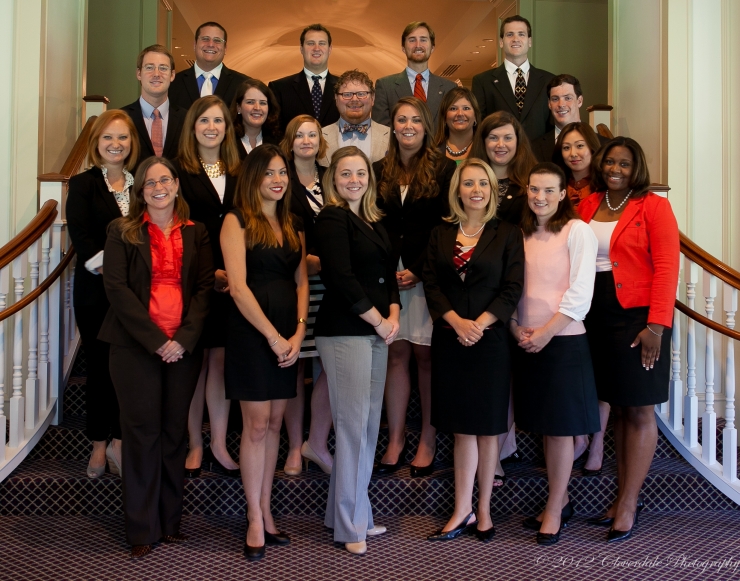 Participants in the Emerging Leaders Program

It all started this spring, when Virginia Gov. Robert F. McDonnell’s office contacted the University of Virginia’s Sorensen Institute for Political Leadership, seeking assistance in developing the next generation of state government leaders.

“This was a good opportunity for us to hit that target area of those in their 20s to early 30s who are on their first or second job and still recently out of school,” April Auger, Sorenson’s director of programs, said.

The participants came from across Virginia and represented a balance of Democratic and Republican viewpoints. Bob Gibson, executive director of the Sorensen Institute, said that bipartisanship is an integral part of the institute’s programs.

“Good leaders learn how to be good listeners as well as good speakers,” he said. “Democrats and Republicans learn a lot from each other, like how to compromise, and they also become stronger in their own positions by understanding the other side.”

Auger added, “Even though the program was initiated by the current governor’s administration, we’re a nonpartisan organization and we believe it’s so important to have good bipartisan relationships.”

Three groups – each with a mix of Democrats and Republicans – worked on policy proposals to help veterans and ex-offenders returning to society from prison, and to promote public and highway safety.

Program participant Julia Kim, chief of staff for Del. Mark Keam (D-Vienna), said that bipartisanship was an important part of completing the projects. “It is helpful to have worked with others not like you. You learn how to build a friendly relationship with them and how to interact and engage with others not like yourself,” she said.

Some of the proposals may even go onto to become state law. Already, one group’s proposal for helping ex-offenders re-enter society has been handed over to state policymakers and is being looked over by the Secretary of Public Safety, Gibson noted.

“We’re hopeful that some of the proposals are strong enough to be introduced to the General Assembly by January,” he said.

The Sorensen Institute is planning to host the Emerging Leaders Program again next year. The application process will be held in June.

“Our hope is that this will continue and we’ll fill that niche market of up-and-coming leaders in the commonwealth,” Auger said.