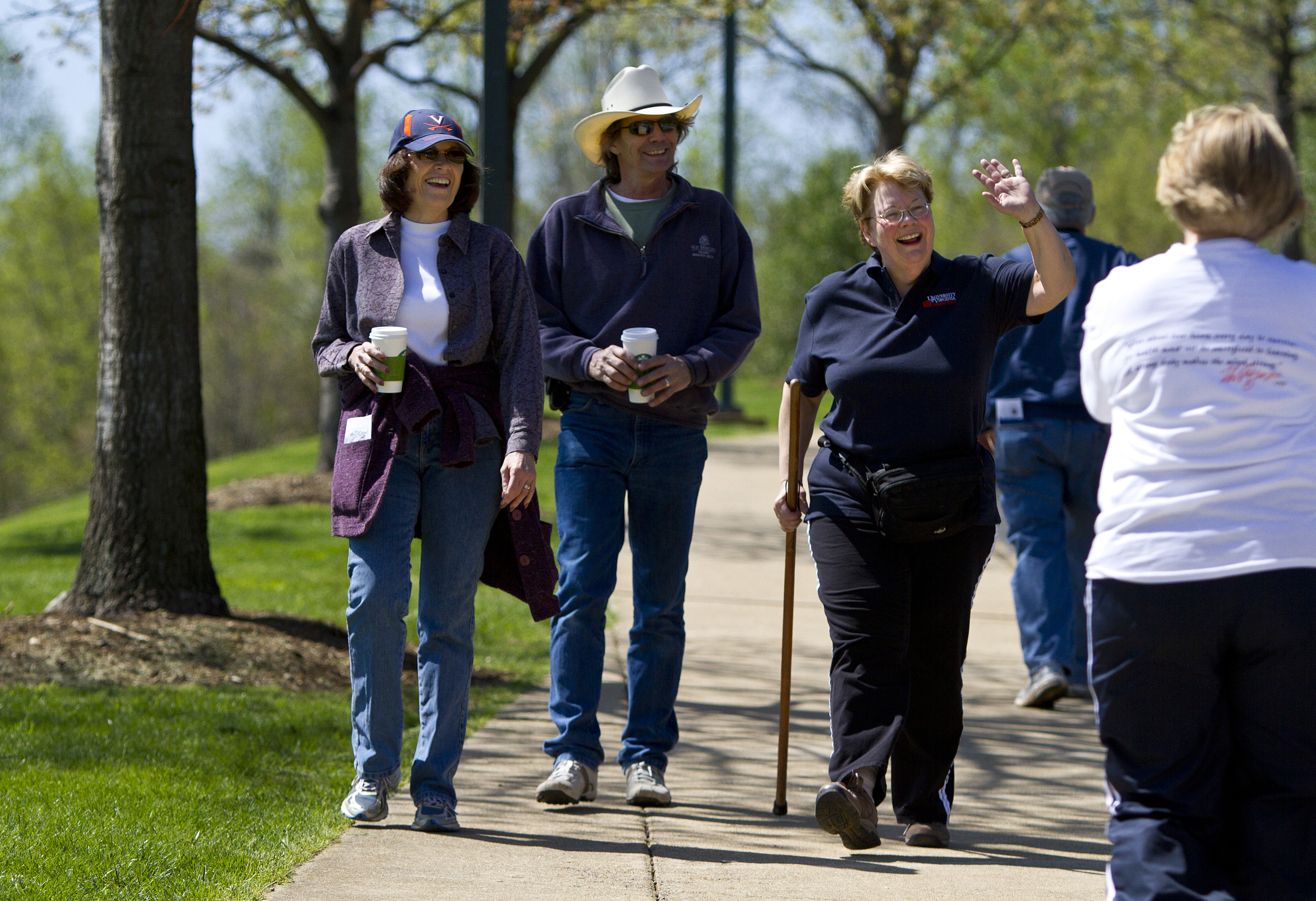 April 18, 2011 — Demonstrating her dedication to both community involvement and health and fitness, President Teresa A. Sullivan led the way on the Cavalier Volkssporting Club's first ever volksmarch on Sunday. The event was billed not only as the new club's first event, but also the concluding event to Sullivan's inauguration as the University of Virginia's eighth president.

Some 491 students, faculty and community members had registered to walk, but Kelly Bernier, fitness and instruction director of Intramural-Recreational Sports, said that at least 50 more participated without formally registering. More than 150 student volunteers helped throughout the day, setting up the post-walk concessions, directing walkers on the route, and cheering on volksmarchers as they rounded Observatory Hill.

Volksmarching is a noncompetitive form of walking for physical fitness. The sport originated in Europe, and takes its name from the German "volksmarsch" meaning "people's march." In America, volksmarches are sanctioned by the American Volkssport Association. Other volkssporting events include skiing, biking and swimming.

Typically, volksmarchers walk 5K (3.1 miles) or 10K (6.2 miles) courses through sites of interest such as historical gardens, museums or places steeped in literary history. Sunday's event started and finished at the Park and featured two courses – a 5K that focused on sites around North Grounds, and a 10K that also included the Rotunda and Academical Village.

"I'm an avid volkssport participant!" Sullivan told a crowd of participants at the Park. She said she started participating in volkssporting events in 1984. For her, volkmarches are enjoyable because they give her an opportunity to enjoy physical activity while seeing interesting sites "the best way, which is on foot."

Tom Mosley and Renate Sabulsky are longtime friends who bonded over their active participation in the Maryland volkssporting community. Mosley was even an officer with the American Volkssporting Association.

Though Sabulksy has since moved to Midlothian, Va., the friends decided to meet halfway in Charlottesville on Sunday. Neither Mosley nor Sabulksy has any connection to U.Va., but they wanted to show their support of the commonwealth's newest volkssporting club.

"It is very special for all our clubs to have a new one," Sabulsky said. She said she finds U.Va.'s club particularly promising because of its ability to foster interest in young people.

Andi Miner of Mount Sidney, Va., walked the 10K course with her friend and running mate, George Gillies, a U.Va. professor of mechanical and aerospace engineering. Though Miner has driven through Charlottesville many times, this was her first visit to Grounds.

"I had a tour. A real tour," Miner said, explaining that Gillies took the time to identify the buildings and sites of interest around U.Va. "He showed me the history."

Robert Reynolds, a fourth-year systems engineering major from Alexandria, saw the volksmarch as an opportunity to show his mother and sister around Grounds. He said he came in support of the Cavalier Volkssporting Club, as well as the inauguration.

"I went to the inauguration on the Lawn," he said. "It's been on my mind a lot this weekend."

John Pollard, a Fayetteville. N.C., resident and a 1968 School of Medicine graduate, returned to Charlottesville for the day to show his support for the inaugural festivities. He was pleased that Sullivan incorporated exercise into the celebration.

"The University has always been involved in health care. We need to be putting more emphasis on health," he said, noting that regular physical activity is a great means of preventing dangerous health conditions.

In her closing remarks, Sullivan reflected on Thomas Jefferson's commitment to health and physical fitness. He wrote to his nephew, Peter Carr, "Walking is the very best exercise. Habituate yourself to walk very far."

"Today you have an opportunity to walk very far, as Jefferson advised," she said. "It sounds like Mr. Jefferson would have been an avid volkssport marcher if he were alive today."

The inaugural walk launched what will no doubt become a U.Va. tradition. The Cavalier Volkssporting Club held an interest meeting at the North Grounds Recreation Center Sunday afternoon to start planning for future events.

Class of 2020: Memories and Moments From a Long-Anticipated Celebration END_OF_DOCUMENT_TOKEN_TO_BE_REPLACED