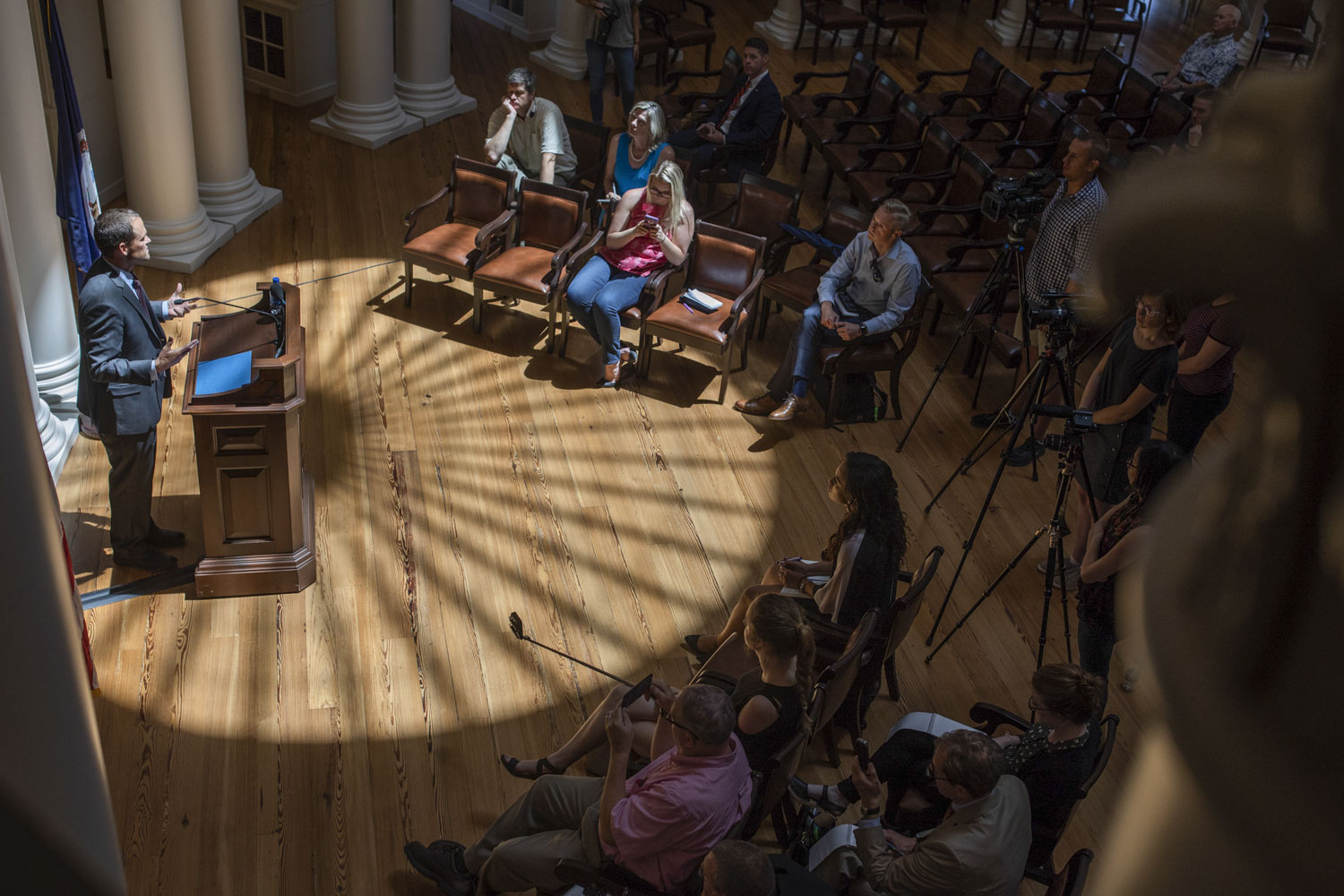 James E. Ryan walked up the stairs into the Dome Room of the University of Virginia’s historic Rotunda about five minutes early for Wednesday’s scheduled press conference, where he was introduced to local media as UVA’s ninth president.

He did not waste time.

“Hi, I’m Jim,” he said to many in attendance, shaking hands and introducing himself. “Thanks, all, for coming.”

Welcoming and engaging from the start, Ryan took to the podium and, on the first day of his tenure, described the first item on his to-do list.

“At the very top of my agenda is spending the next several months speaking to people and listening, all in an effort to craft a vision for the University for the next 10 years,” said the 51-year-old Ryan.

“There are a number of other things that need to be taken care of … but the biggest task, for me, ahead is articulating a vision. And I think to be compelling, the vision has to be a shared one.”

This is a homecoming for Ryan, who grew up in Midland Park, New Jersey and first came to UVA as a law student in the fall of 1989. In 1992, he graduated first in his class. Six years later, he joined the School of Law faculty, where he had a 15-year run before leaving for five years to serve as dean of the Harvard Graduate School of Education and the Charles William Eliot Professor of Education.

“As an alumnus of the school and a former faculty member for 15 years,” Ryan said, “I am delighted to have the opportunity to serve the university that I truly love.”

In the 9 o’clock hour on Day One of his tenure, Ryan took to Twitter, writing from his new handle, @presjimryan: “So good to be home — and really looking forward to starting this @UVA journey together! #FirstDayofSchool #Grounds #OursToShape”

The “Ours to Shape” hashtag is a reference to a newly launched effort to gather input from the University community, which includes a website where Ryan poses questions about three critical themes he will focus on during his presidency: community, discovery and service.

“Some people encouraged me to come in and announce some grand thing with respect to the community,” he said at the press conference. “In some respects, I think that can create as many problems as it solves. Even though this may delay a little bit getting to something concrete, I think it’s a much better way to go.”

Ryan offered his perspective on the role of leaders at the University.

“I view the job of academic leaders, president included, as enabling others to do their very best. So when I think about this job, I honestly think about it as an opportunity to serve others … to serve the vice presidents, to serve the deans and to enable them to their very best work. And that continues on to faculty and students. So, that’s really what drives my approach to the job.” 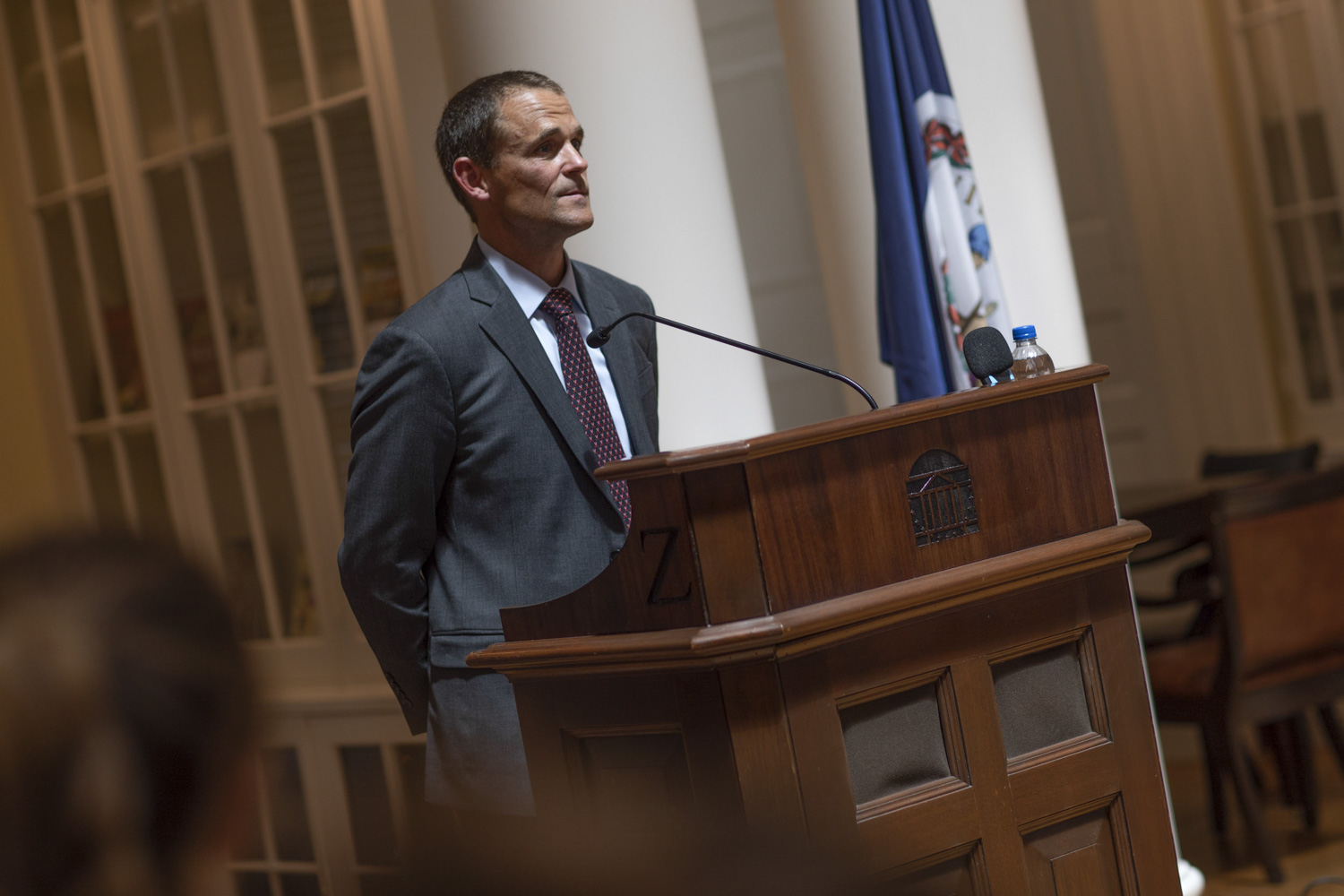 He also acknowledged there are challenging times ahead for higher education – and UVA, he said, is no exception.

“But having been a first-generation college student myself, I also know firsthand the transformative power of education,” he said. “I believe deeply in education, and higher education in particular. I think institutions of higher education can and should be a force for good. And in this respect, I am especially delighted to be at the University of Virginia because, in my view, it has been mission-driven from the beginning.”

Ryan’s first day, he noted, fell on the 200th anniversary of the Rockfish Gap meeting, where Charlottesville was selected as the location for UVA.

“At that time, in those early days, the mission of the University was to prepare citizen-leaders to help our newborn democracy,” Ryan said. “That mission has expanded to include cutting-edge research, outstanding medical care. But the idea of serving the public good is a theme that runs throughout the University of Virginia’s history. It’s that theme that I find incredibly compelling.”

During the press conference, Ryan was asked about the upcoming first anniversary of the deadly Aug. 11-12 “Unite the Right” rally, the Miller Center’s recent hiring of former Trump administration official Marc Short as a senior fellow and about diversity and inclusion at the University.

Ryan – at that time in the late stages of the presidential selection process – said he watched the events of last August in real time online. “Like those of you who are here, I was horrified by the scenes of violence and the scenes of neo-Nazis and white supremacists marching with tiki torches. It was as alarming as it was appalling,” he said.

Ryan said he has been briefed about the University’s plans for the anniversary.

“These events, as was seen last year, are often fairly fluid and fairly dynamic,” he said. “I feel like the University is as well-prepared as it can be, but this is an unfolding situation.”

The Miller Center’s recent appointment of Short, a former White House legislative director under President Donald Trump, sparked a petition in opposition and the public resignation of two historians from their Miller Center appointments.

“I recognized that there are many in this community who do not support President Trump or his administration and are deeply distressed by what they have seen,” Ryan said. “I respect that view.

“It’s also consistent with the idea that some find passé, but I think is as deeply a part of the University’s core as anything, and that is, we should be willing to engage with those with whom we disagree, even when we disagree with them very strongly.”

“This is an issue I care deeply about,” he said. “It’s an issue that, as the dean of the Harvard [education] school, I spent a lot of time working on. It’s multifaceted. There’s not one single thing to do. But a lot of it involves a commitment to the outcome.”

Ryan praised UVA’s Dean’s Working Group and its Bridge Project on their efforts regarding diversity.

“One of the things that I’ve noticed is that higher education has become fairly good – it varies by institution – but have become fairly good at assembling diverse groups of students,” he said. “But they are still working out how to create a sense of inclusion and belonging and a sense of integration. There’s still an awful lot of self-segregation on college campuses. I think there, we are just starting to see efforts.

“And this is what’s behind the Bridge Project – intentional efforts to bring students together, so they will understand commonalities and forge new relationships. I think this is so important because you lose the benefits of diversity if, once you’ve assembled a diverse group of people, they are not interacting.”

Ryan said one of the things he is most looking forward to as president is spending time with students. That’s a key reason why, during the long-planned Carr’s Hill renovations, Ryan will live in a pavilion on the Lawn.

“I thought that would give me the opportunity to have a number of casual conversations with students, where I think you can learn as much as you can in a formal meeting,” he said.

Since Ryan was announced as president-elect last September, he had almost weekly phone conversations with Sullivan.

“Boy, I learned an awful lot,” he said of the calls.

Ryan understood that Sullivan’s presidency came with ups and downs. “These were turbulent times, and I think she demonstrated remarkable courage, grace and determination,” he said.

A Year We Will Never Forget: 2019-20 in Review END_OF_DOCUMENT_TOKEN_TO_BE_REPLACED

‘What Will You Carry With You?’ Remarks From UVA President Jim Ryan END_OF_DOCUMENT_TOKEN_TO_BE_REPLACED