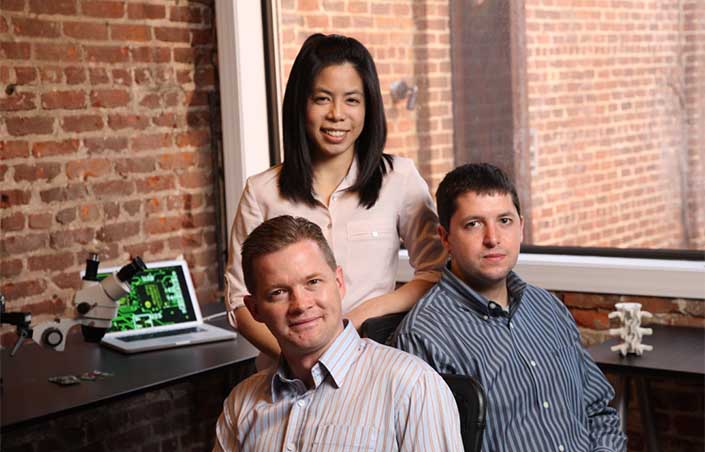 Although definitive statistics are hard to come by, the consensus is that the percentage of expectant mothers who choose to have an epidural during labor is on the rise – and in some hospitals has reached 90 percent. Considering that the Centers for Disease Control estimates that there were close to 4 million births in the United States in 2012, even a small failure rate can affect tens of thousands.

This is the issue that Will Mauldin and Kevin Owen, former doctoral students of University of Virginia biomedical engineering professor John Hossack, are attempting to solve with their company, Rivanna Medical. The Charlottesville Business Innovation Council recently recognized the firm for advances in the field.

One of the primary reasons for epidural failure is incorrect placement of the needle administering the local sedative. Rivanna Medical is developing a pocket-sized ultrasound device that an anesthesiologist could use to guide an epidural stick, an idea Mauldin first explored while taking a class at the Darden School of Business. The Department of Biomedical Engineering encourages students to take a translational perspective on their research, and this allowed him to take “Developing New Products and Services,” a course offered by Darden assistant professor Raul Chao.

Because physicians are reluctant to expose pregnant women and their babies to X-rays, anesthesiologists must often rely on their sense of touch to select the proper place between the vertebrae to insert the epidural needle.

Mauldin and Darden classmate Giorgio Brusa thought an ultrasound solution had sufficient potential that they decided to form Rivanna Medical to bring it to fruition. Brusa is CEO, while Mauldin serves as chief technology officer. They recruited Owen as chief operating officer. Their first employee, Sarah Nguyen, was a biomedical engineering major.

The technology has come a long way since Mauldin and Brusa introduced their first prototype to their classmates. They licensed fundamental technology from the University and developed new techniques to optimize ultrasound imaging of bone, not usually a strength of ultrasound. “You just place our device on the patient’s back, and it highlights the bone automatically,” Owen said. “You don’t have to be a trained sonographer to use it correctly.” The device can be used to scout a location or as a real-time guide to needle insertion.

The device is handheld and rechargeable with its own integrated screen, which means physicians can slip it into their lab coats. It can also be used in general purpose mode to image the heart, abdominal organs and blood vessels, which opens the way to a host of point-of-care applications like rapid trauma assessment. Rivanna has just introduced a preproduction version of the device, capitalizing on feedback from two earlier prototype designs.

The company has also come a long way since Brusa and Mauldin spent the summer following their class as residents of the business incubator now known as the iLab at Darden. “It’s been a gigantic learning experience,” Mauldin said. “For every stage of the company’s development, there’s a new skill set you need to master.”

The company has set the stage for commercialization. “If all goes well, the next step for the company is to find a partner to handle manufacturing and distribution,” Mauldin said. “We believe that in the next 12 to 18 months, we’ll have this on the market.”

The company has received funding from National Institutes of Health and the National Science Foundation’s Small Business Innovation Research Programs.

It’s Copperhead Season in Virginia. Here Is What You Need to Know END_OF_DOCUMENT_TOKEN_TO_BE_REPLACED

What’s Next for UVA’s Class of 2022? END_OF_DOCUMENT_TOKEN_TO_BE_REPLACED