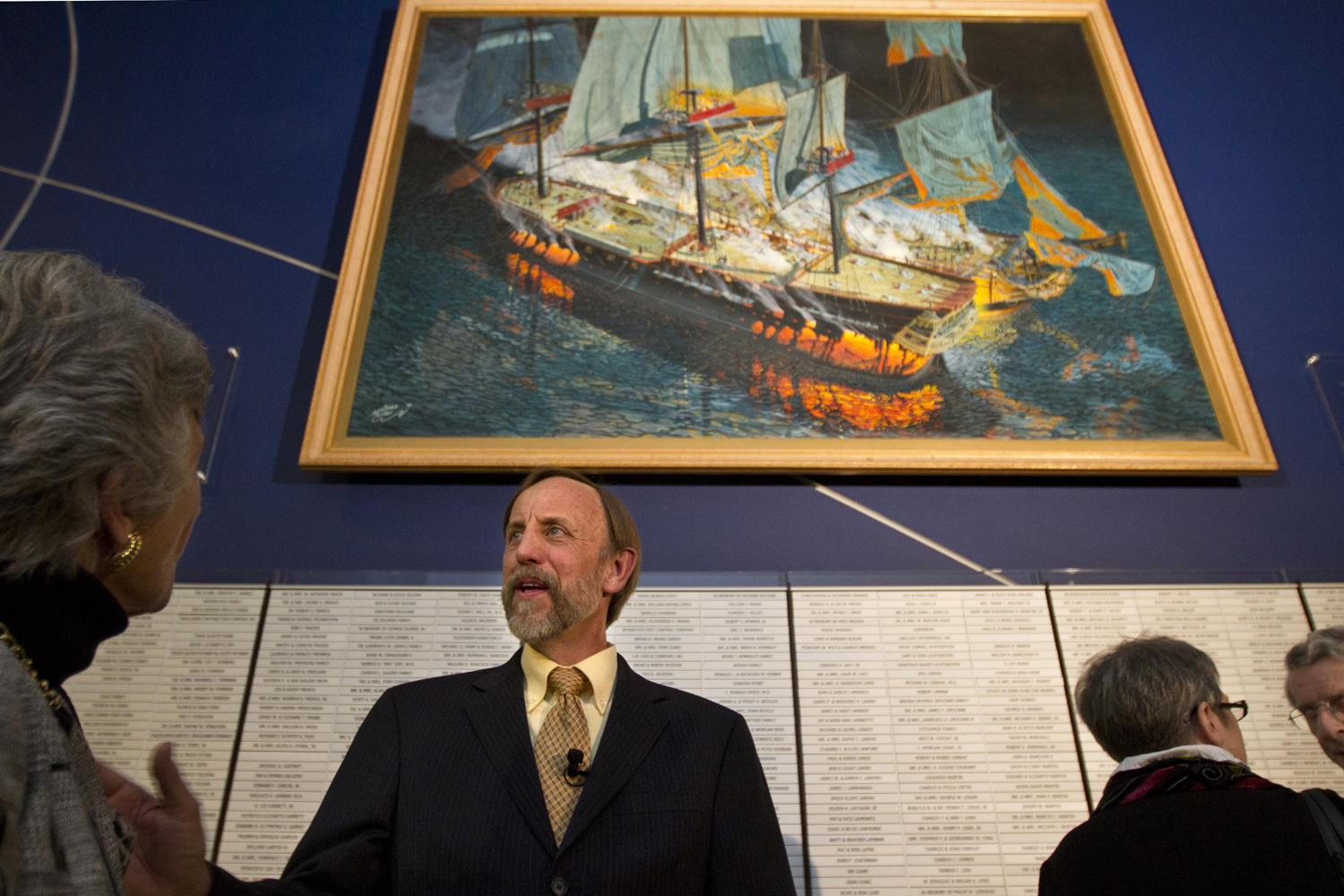 January 10, 2011 — Visitors to John Paul Jones Arena can now admire a piece of art that the University of Virginia hopes will inspire those who represent U.Va. in athletic competition, as well as reflect their fighting spirit.

An 8-by-10½-foot painting, titled "The Battle of Flamborough Head," was unveiled Friday in the arena's main concourse, adjacent to the main lobby, above the donor wall outside section 309.

The oil-on-canvas painting, by Dean Mosher, depicts a battle fought during the Revolutionary War on Sept. 23, 1779, off the coast of Yorkshire, England. During this fight, John Paul Jones, captain of the Bonhomme Richard, was said to have defiantly offered this memorable response to an English captain who asked if Jones planned to surrender:

"I have not yet begun to fight!"

That famous quotation already is inscribed on a wall at the arena's eastern end. Now U.Va. has added another link to the man considered to be the father of the American Navy.

It can be confusing for those not well-versed in the arena's history, but John Paul Jones the naval hero is no relation of John Paul "Jack" Jones, a 1948 graduate of the School of Law, whose son, Paul Tudor Jones, donated more than $35 million to help build the arena.

Paul Tudor Jones, a 1976 graduate of U.Va., purchased the painting – which is dominated, as chance would have it, by oranges and blues – from Mosher and donated it to his alma mater, as a tribute to his father and the naval hero.

The Joneses were among the guests Friday night at a private gathering during which the painting was unveiled. Others included President Teresa A. Sullivan, players and coaches from the Cavalier men's and women's basketball teams, U.Va. football coach Mike London, Mosher and his wife and children, and Dr. James C. Bradford and Peter Reaveley, two of the naval scholars with whom Mosher worked to ensure his painting was as historically accurate as possible.

Mosher told the guests about the battle and its significance and described the methods he used to painstakingly create the painting in his studio in Fairhope, Ala. In an earlier interview, Mosher talked about the painting he finished on April 12, 1997, about 17 months after he began. "I'm hoping this will be a piece of inspiration. If you really believe in what you're fighting for, look what our great American heroes went through."

An interactive kiosk beneath the painting provides information on the battle and its historical impact; on John Paul Jones, who is buried at the U.S. Naval Academy in Annapolis, Md.; and on Mosher and the extraordinary steps he took to get the details correct.

"None of us can go back exactly in history," he said, "but I've tried to come as close as I possibly can to going back to every single solitary detail."

Mosher grew up in Mobile Bay, Ala., and his other historical paintings include "The Battle of Mobile Bay." That took place in August 1864 and was the last major naval battle of the Civil War. The hero of that battle was a Union admiral, David Farragut, to whom is attributed a quotation as famous as John Paul Jones': "Damn the torpedoes, full speed ahead!"

Oliver arrived planning to spend 30 minutes with Mosher. Three hours later, Oliver was still with the artist, whose passion for his work is palpable.

When he left Mosher's home, Oliver called Paul Tudor Jones and said he thought the painting might enhance John Paul Jones Arena. "I saw a true alliance with what we're trying to do on a daily basis in terms of our basketball teams, and all of our sports," Oliver said.

In remarks before the unveiling, Paul Tudor Jones spoke about the spirit of the painting and the power of sports, particularly basketball, which he said helped save his father's life. Twelve years ago, he said, when his father was 77 years old, his mother was diagnosed with Alzheimer's, a disease that took her life four years later.

To assuage his grief over his wife's condition and her subsequent loss, he said, his father became obsessed with basketball, attending every game played by his hometown teams, the NBA's Memphis Grizzlies and the University of Memphis Tigers. "Watching basketball gave him a new purpose," he said. Through basketball, John Paul Jones also met his second wife, Sandra, who attended the Friday event with him.

"On the court, you're doing so much more than merely playing a game," Jones said, addressing the women's and men's basketball teams, seated before him. "My father is living proof of that, and that's why this arena is named after him."

The arena is also a tribute to the John Paul Jones lionized in the painting, he said, a hero of whom Thomas Jefferson said: "I consider this officer to be the principal hope of our future efforts on the ocean." Jefferson displayed a bust of the naval commander at Monticello alongside those of Washington, Franklin and Lafayette.

The basketball players need to remind themselves of John Paul Jones' tenacity, of his fighting words and spirit, and of the power of basketball, he added. "When you're down four points with only 35 seconds to go, you need to say these [fighting] words because you're not playing just a game, and you’re not playing just for yourselves.”

"What you do on the basketball court matters to so many people in so many ways," he said.

Meet the New Cavalier on Horseback: She’s Eager To ‘Carry On a Legacy’ END_OF_DOCUMENT_TOKEN_TO_BE_REPLACED

Housing Changes Are a Breath of Fresh, Cool Air – Especially for Lawnies END_OF_DOCUMENT_TOKEN_TO_BE_REPLACED

Virginia Football – For All Virginia END_OF_DOCUMENT_TOKEN_TO_BE_REPLACED