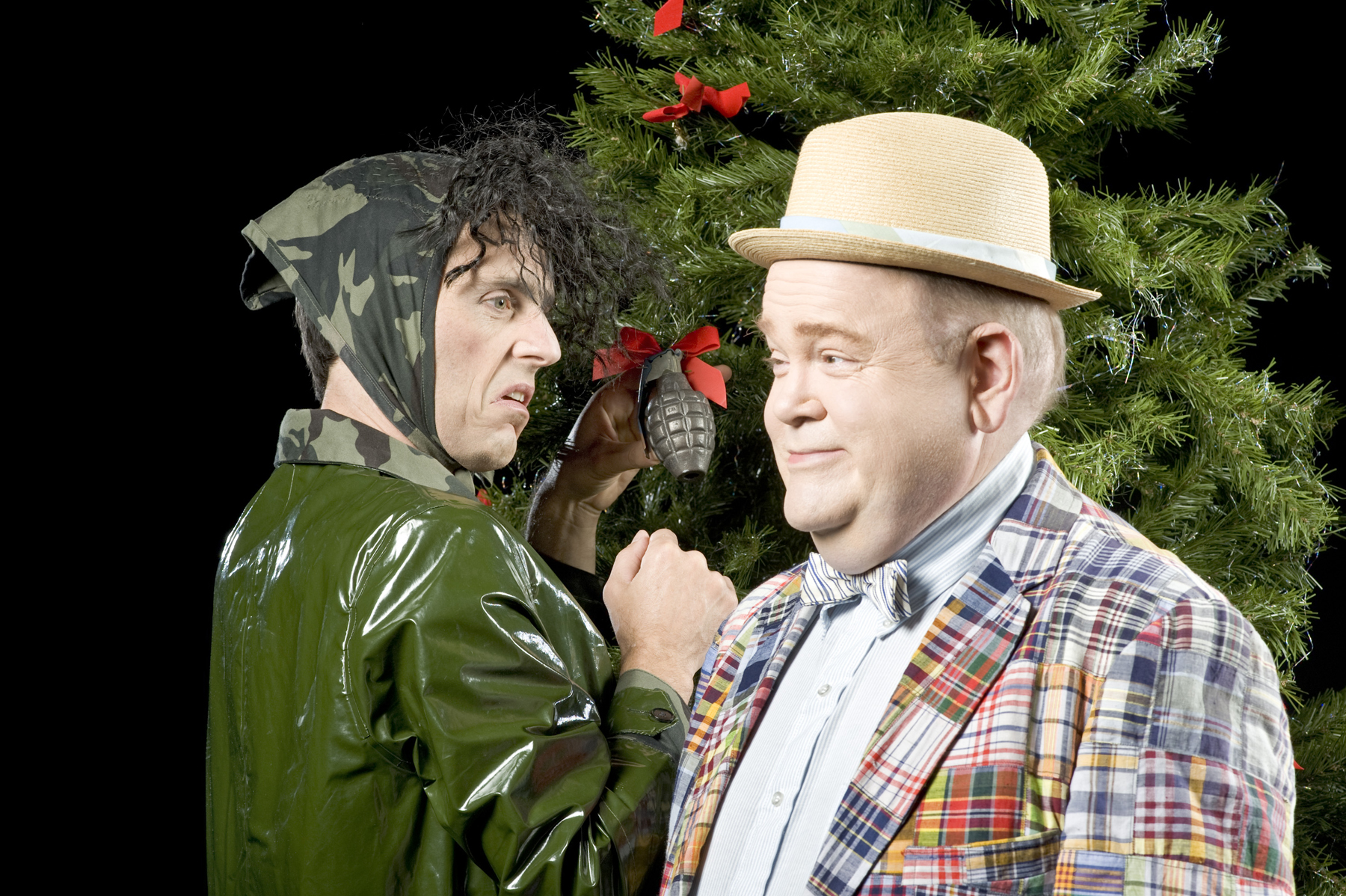 July 7, 2010 — Last year the fine folks of Tuna, Texas put a charge in July 4 festivities with "Red, White and Tuna," to the delight of audiences at the Heritage Theatre Festival. This summer, they are turning their attention to holiday hilarity of another kind with "A Tuna Christmas," which opens July 15 at Culbreth Theatre.

The show will once again feature two talented actors playing all 23 residents of Tuna as they seek out the answers to such burning questions as: Will Vera Karp continue her stranglehold on the annual Tuna Yard Decorating Contest for a 16th straight year? Or is the whole contest in jeopardy due to the mysterious Christmas Phantom? And will the town theater's production of "Charlie" Dickens' "A Christmas Carol" survive the edits from the town censors and its unpaid electric bills to even make it to its opening night?

"A Tuna Christmas," written by Ed Howard, Joe Sears and Jaston Williams, directed by William Howard Rough, and starring Evan Bridenstine and J.P. Scheidler, will run from July 15-17 and Aug. 2 and 5. Shows will be presented at 7:30 p.m, with a 2 p.m. matinee performance on July 17. Tickets are $25, $21 for seniors (60 and over) and U.Va. faculty and staff, and $15 for students. Season and single-show tickets are available at the U.Va. Arts Box Office in the Culbreth Theatre building, online at www.uvahtf.org or by calling 434-924-3376.

"Evan and J.P. are incredibly talented," Rough said. "They are a pleasure to work with and come up with ideas all the time. My job with the show is basically to stay out of their way as much as I can help myself. We all pop up ideas. They have so much fun and give me a great deal of fun as well."

The play, written as the sequel to the original "Greater Tuna," is full of outlandish characters, Rough said. Yet they are still characters with whom audiences can identify.

"It's really fun," he said. "It's oddball people in this little town, of all shapes and sizes, male and female and young and old, crotchety and happy … the whole gamut of human experience. I think in these very funny people we kind of find ourselves as well."

Even in the characters' more extreme sides, Rough said. "As obnoxious as some of them are, we see the obnoxious side of ourselves. It's just great fun to identify with all kinds of comic extremes."

A Year We Will Never Forget: 2019-20 in Review END_OF_DOCUMENT_TOKEN_TO_BE_REPLACED

‘What Will You Carry With You?’ Remarks From UVA President Jim Ryan END_OF_DOCUMENT_TOKEN_TO_BE_REPLACED