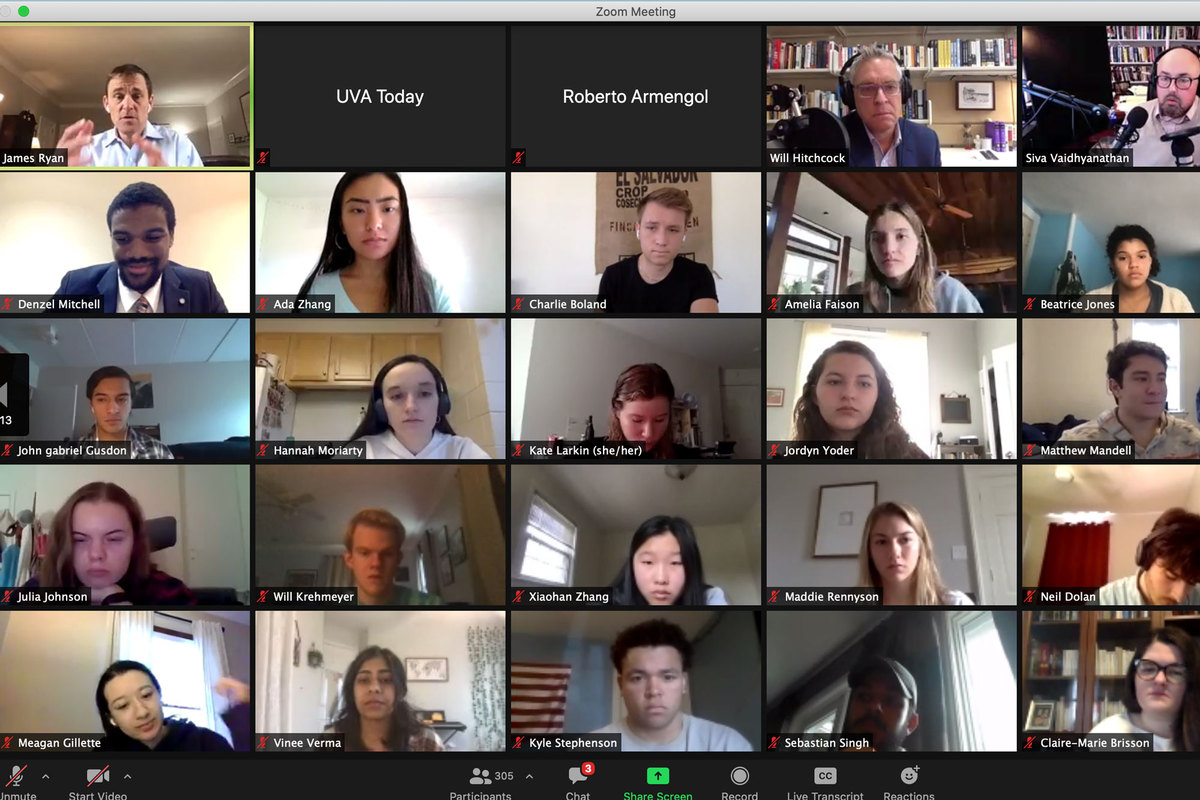 In the fall, when University of Virginia Provost Elizabeth Magill put out a call for special, “signature” January term courses, media studies professor Siva Vaidhyanathan and history professor Will Hitchcock knew instantly what they needed to do.

The professors had already been recording a new podcast called “Democracy in Danger,” and believed a J-Term course would be the perfect complement.

“We realized that the subject matter, coming right after the most wrenching U.S. election since 1876, would make a great course,” Vaidhyanathan said.

Fast-forward a couple months, and their idea has become reality. The professors’ course, also called “Democracy in Danger,” has more than 300 students.

“I’ve never taught this many students in a January term course,” Vaidhyanathan said. “I usually take 20 students to New York City to visit CNN and Stephen Colbert at this time of year.”

A part of UVA’s Democracy Initiative, the course and podcast are products of a partnership between the Governing America in a Global Era program that Hitchcock runs (and is sponsored by the College of Arts & Sciences) and the Deliberative Media Lab that Vaidhyanathan heads up.

“We hope this helps them become better citizens, and helps them go forth and strengthen American democracy in the coming years.”

“We want our students to push us on how we have done the podcast, how we have presented these issues to the world. Are we missing any issues or questions? Are we blinded by our age, class and political ideologies? We want the students to consider themselves co-producers of the second season of ‘Democracy in Danger.’

“We think ‘Democracy in Danger,’ the course, is a distillation of the mission of the University of Virginia. It’s a high-level academic engagement with difficult issues. It’s designed to empower students to think for themselves. It’s publicly engaged. And it invites long-term curiosity and thinking.”

Last Friday, UVA President Jim Ryan made a guest appearance on the hourlong podcast, as part of a discussion about education’s role in democracy.

During the show, Ryan was asked if he could recommend any strategies that could address the fact that many college students may be hesitant to fully express their opinions on issues during these tumultuous political times. He shared a technique from his days as a member of the UVA School of Law faculty, when he assigned students to defend a side of a constitutional law decision they didn’t personally agree with.

“I think that, as faculty, we need to do our best to create a sense of community in our classrooms that’s based on trust, and based on trust in the good faith of those who are part of the community,” Ryan said. “I think we need to encourage people who are empathetic when they speak. And we also need to encourage generous listening so that we’re not just going to say, ‘Well, that’s a bad person.’”

Ryan spent about 15 minutes of the hourlong class answering questions from students.

You can stream the podcast from the “Democracy in Danger” website via Soundcloud. Follow @DinDpodcast on Twitter for all the latest information. The podcast episode featuring Ryan will be available in February on major podcasting platforms, including Apple Podcasts, Spotify and Stitcher.

Vaidhyanathan and Hitchcock are hopeful their students will carry the ideas and questions raised on the podcast and in the J-Term course into the rest of their coursework at UVA – and beyond.

“There is only so much one can accomplish in a two-week, intensive course,” Vaidhyanathan said, “but we hope this helps them become better citizens, and helps them go forth and strengthen American democracy in the coming years.”

Meet the New Cavalier on Horseback: She’s Eager To ‘Carry On a Legacy’ END_OF_DOCUMENT_TOKEN_TO_BE_REPLACED

Virginia Football – For All Virginia END_OF_DOCUMENT_TOKEN_TO_BE_REPLACED