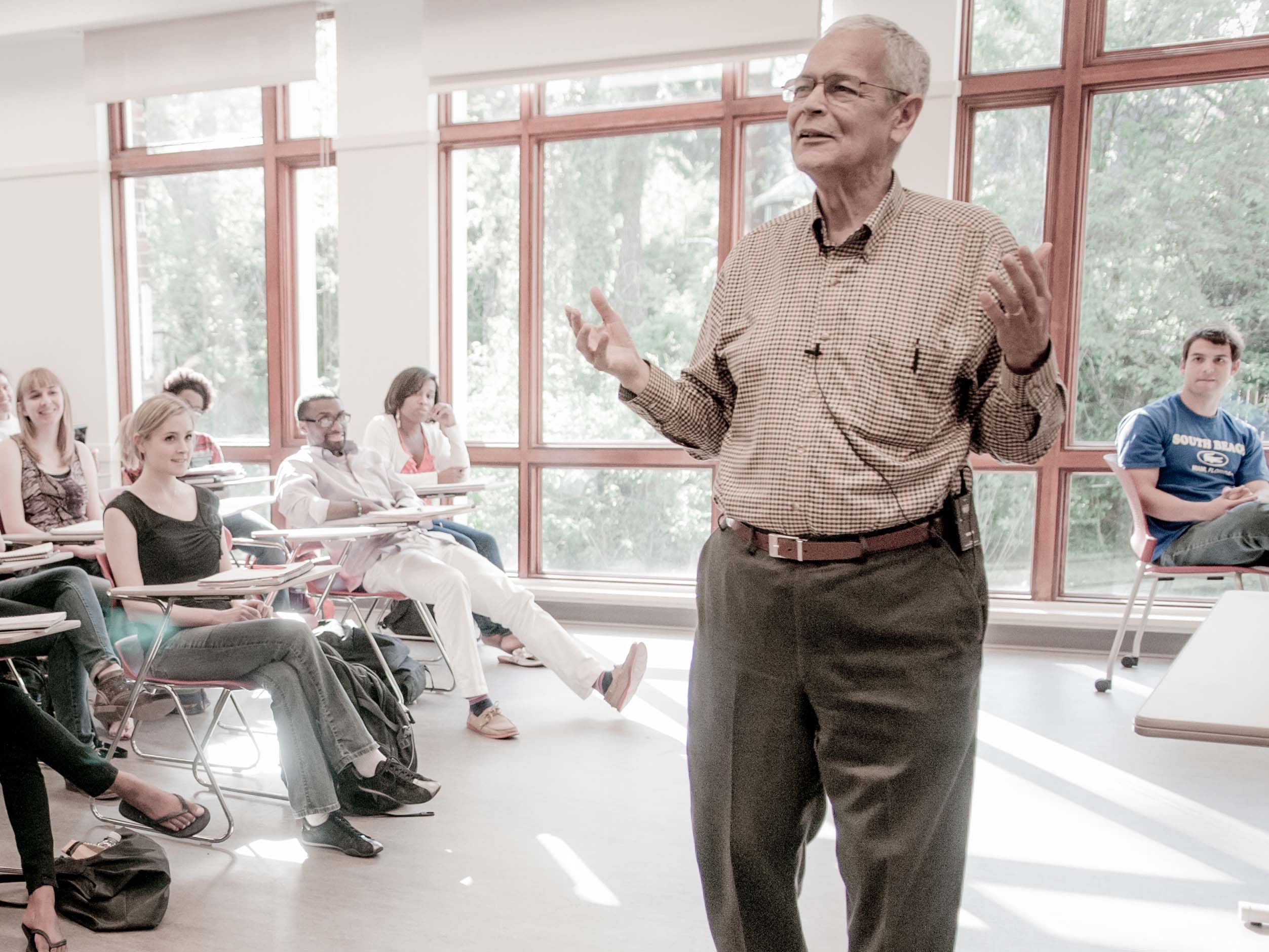 H. Julian Bond, University of Virginia professor emeritus of history and one of America’s foremost civil rights leaders, died on Saturday night in Fort Walton Beach, Florida after a brief illness. He was 75.

While attending Morehouse College in Atlanta, Bond was one of the original leaders of the Student Nonviolent Coordinating Committee in the early 1960s. He participated in sit-ins at segregated lunch counters in Atlanta and also the Freedom Rides, a courageous effort to register black voters in the South.

The Library of Congress named him “A Living Legend” in 2008. He actively championed civil rights and social justice from the early days of the Civil Rights Movement and throughout all of his life.

He chaired the National Association for the Advancement of Colored People from 1998 to 2010, and co-founded the Southern Poverty Law Center in 1971. He also served for 20 years in the Georgia legislature, in both the state House of Representatives and the Senate, beginning in 1965. A charismatic speaker, Bond narrated the PBS series “The Eyes on the Prize” and hosted the television show, “America’s Black Forum.”

Bond joined U.Va.’s Corcoran Department of History in 1992 and retired from the University in 2012 after a distinguished teaching career. More than 5,000 students attended his classes, where he drew on his first-hand knowledge of the Civil Rights Movement and its participants to teach civil rights in the larger context of American history.

“Julian Bond was an enormously respected civil rights leader, politician, scholar and writer who shaped the course of history through his life and work,” U.Va. President Teresa A. Sullivan said. “He made significant contributions to the University of Virginia, teaching thousands of our students while serving as a mentor and role model for all of us. Martin Luther King Jr. told us ‘the arc of the moral universe is long, but it bends toward justice.’ Julian Bond devoted his life to bending our world toward justice, and all of us should be grateful.”

At the University, Bond co-directed the “Explorations in Black Leadership” oral history project for 15 years with history professor Phyllis Leffler, now retired. The project started in 2000 as an initiative of the Institute for Public History. Their partnership culminated in January with the book, “Black Leaders on Leadership: Conversations with Julian Bond,” published by Palgrave Macmillan, and a companion website that features the full video interviews Bond conducted with 50 subjects, plus Leffler’s interview of Bond.

“Julian Bond was a principled voice for justice in the world – and for him, justice was an inclusive concept,” Leffler said. “A lifelong fighter for civil rights, he worked tirelessly and generously. It has been my privilege to collaborate with him on our project and book on black leadership.

“More than anything else, I shall remember him as humble and kind – a model of leadership for the world.”

Bond’s papers are housed in U.Va.’s Albert and Shirley Small Special Collections Library. They contain a variety of items, including letters, newspaper clippings, press releases and minutes from SNCC meetings.

“The loss of Julian Bond is simply incalculable,” McDowell said. “Not only was he a personal and beloved friend, he was beloved by all who champion and fiercely defend civil rights, human rights and social justice.”

#JulianBond taught me @UVA. His ability to engage room and to not underestimate ability of students to care inspired me to teach.

Bond was active during his time at U.Va., contributing to the University community outside the classroom as well.

He hosted an annual “Civil Rights South Seminar,” a six-day, University-sponsored trip to landmark sites such as Montgomery and Selma in Alabama. He led the ninth such tour in March.

For five years from 2007 to 2012 – and 60 meals – he was the guest of honor at an informal dinner series organized by the University’s Office for Diversity and Equity to bring together members of the University community. The dinners were designed to introduce new faculty members and others to Bond and to each other in an informal setting. Students, staff and community members also attended the dinners.

“Julian Bond’s contributions advancing civil rights and to the University of Virginia and Charlottesville community were numerous and passionate,” said Dr. Marcus L. Martin, vice president and chief officer for diversity and equity. “Julian was much more than a civil rights icon. He was a personal friend and mentor to me. He will be greatly missed.”

Very #blessed, like many Hoos before & after me, to have taken his Civil Rights class while he was a prof @UVA! #RIP https://t.co/70Wa8XwWo3

The University is seeking to establish the Julian Bond Professorship in Civil Rights and Social Justice, a permanent position within the College and Graduate School of Arts & Sciences that will continue Bond’s scholarly legacy. Funding support from alumni, parents and friends for the endowed professorship stands at $2 million toward the $3 million goal. (Gifts can be made online here.)

“He will be long remembered as one who devoted his entire life to ensuring that the fundamental rights of citizenship be extended to all, lest humanity be diminished, lest democracy be trampled in the dust,” McDowell said. “He understood, more importantly, that securing these rights demanded ceaseless, uncompromising, fearless agitation.”

In a recent documentary, “Julian Bond: Reflections from the Frontlines of the Civil Rights Movement,” screened at U.Va.’s 2013 Community Martin Luther King Celebration, Bond told the interviewer that he firmly believes people will come forward to continue the civil rights work that needs to be done, just as he and so many others rose up to fight for civil rights in the 1960s.

Do You Know the History of Your Favorite Corner Spots? END_OF_DOCUMENT_TOKEN_TO_BE_REPLACED

Netflix to Add Ads. Why This Could Be a ‘Game-Changer’ for Your Viewing Experience END_OF_DOCUMENT_TOKEN_TO_BE_REPLACED

What’s Next for UVA’s Class of 2022? END_OF_DOCUMENT_TOKEN_TO_BE_REPLACED