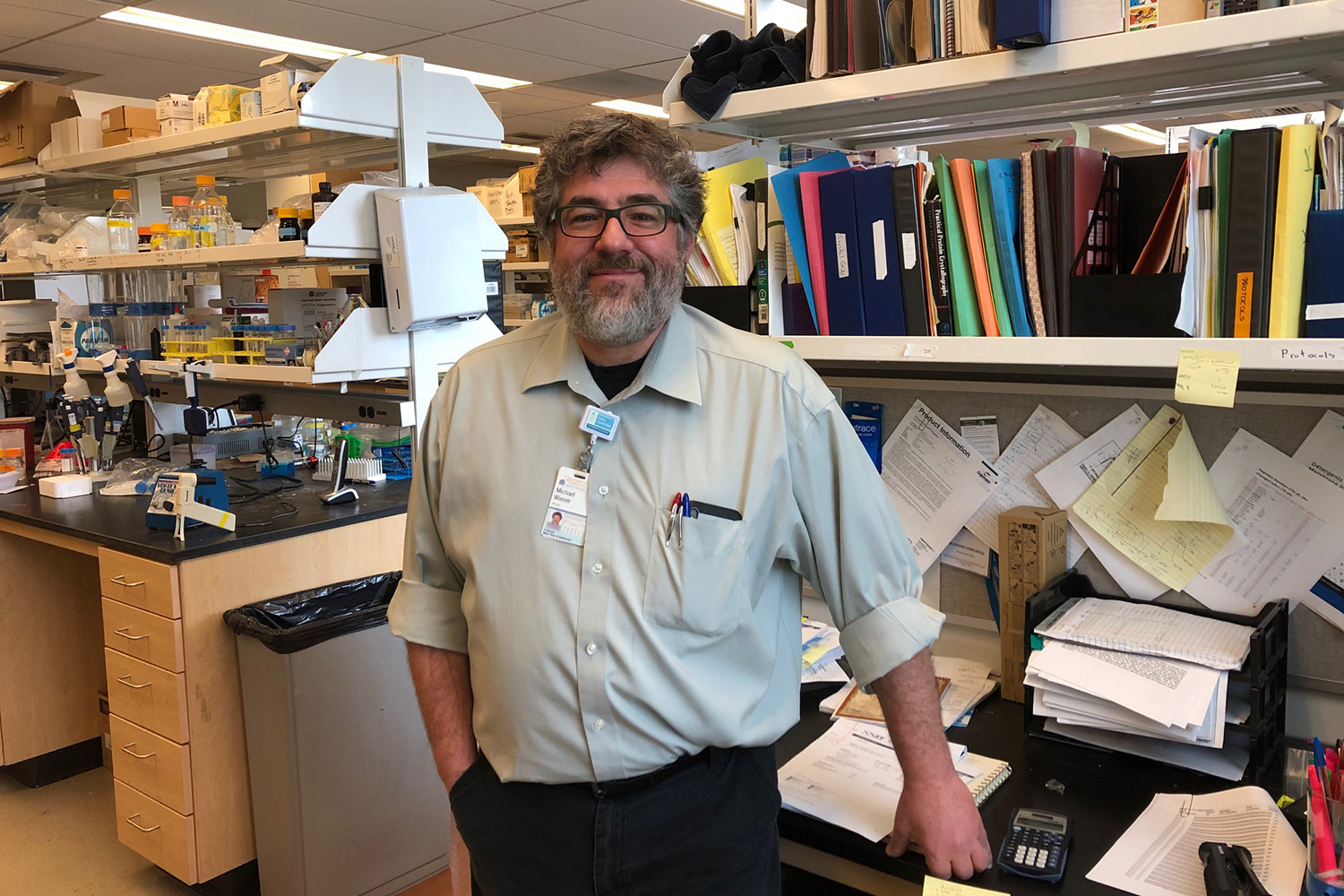 A scientist at the University of Virginia School of Medicine has received a three-year, $1 million award from the William M. Keck Foundation to develop a new and better way to map out the submicroscopic world. This information helps us understand biological processes and aids researchers in developing new drugs to battle disease, among other benefits.

Michael Wiener, a professor (and first-generation college grad) in the Department of Molecular Physiology and Biological Physics, is seeking to create a simpler, more reliable method to determine the structures of molecules far too small for traditional light microscopes to see.

“Our genes provide instructions for the design and construction of approximately 20,000 different molecular machines, which are called proteins,” he said. “These proteins, individually and in complex with other proteins, carry out the functions of life on a molecular level. By determining the structures of these protein machines, we can learn about how they cause biological processes and disease.

Into the Atomic Realm

For researchers seeking to determine the structure of molecules or molecular complexes, very powerful methods exist, either by using intense beams of X-rays on three-dimensional crystals made up of protein molecules or by using recently emergent methods with microscopes that use beams of electrons. However, each of these methods requires significant time and money to prepare suitable samples, and the high risk involved in successful sample preparation often makes the chance of failure very high.

Wiener, working with professor Lei Wang at the University of California, San Francisco, and professor Ken Dill at Stony Brook University, proposes something entirely new. Instead of seeking to obtain lots of information from a single, hard-to-make specimen, he aims to collect small amounts of information from many easily prepared samples. He has named this new paradigm “Serial Solution Scattering Structure Determination,” or S4D.

The new approach could let scientists determine structures as both isolated entities and also in the context of living cells, and it could dramatically accelerate how quickly scientists can determine the structure of molecules. That would allow the field of structural biology to better keep pace with the tremendous amounts of information being generated in the field of genomics, the study of genes, and proteomics, the study of proteins.

“I’ve proposed an alternative approach, based on simple physical theories more than a century old, and updated with the most modern, cutting-edge laboratory and computational methods. This high-risk, high-reward approach is not something that conventional federal funding sources have traditionally been highly eager to support. Some programs exist, but they are extraordinarily competitive,” Wiener said. “The William M. Keck Foundation, however, specifically solicits these ideas, ideas that have the potential to be truly transformative to science.”

He expressed his gratitude to the Keck Foundation for making his work possible. “I feel extraordinarily fortunate to have the opportunity to pursue what I consider to be eminently realizable scientific dreams, with the ultimate goal of determining macromolecular structures, [in] high resolution and detail, in living cells themselves. As only the third UVA recipient of this award, and the first from the School of Medicine, I am appreciative of the support that I have received from the UVA Office of the Vice President of Research, Dr. Joel Baumgart in particular, as well as the support from the School of Medicine.

“We could really be onto something here!”

The funding from the Keck Foundation’s Medical Research Grant Program is a tremendous recognition for Wiener and his work. When the University was notified of the award, the letter, mailed to UVA President Jim Ryan, was actually accompanied by a check for $1 million.

The California-based Keck Foundation seeks to fund “pioneering discoveries in science, engineering and medical research,” according to its website. “By funding the work of leading researchers, the establishment of unique laboratories and research centers, and the purchase of sophisticated instruments, we are laying the groundwork for breakthrough discoveries and new technologies that will save lives, provide innovative solutions to complex problems and add immeasurably to our understanding of life on Earth and our place in the universe.”

Meet the New Cavalier on Horseback: She’s Eager To ‘Carry On a Legacy’ END_OF_DOCUMENT_TOKEN_TO_BE_REPLACED

Virginia Football – For All Virginia END_OF_DOCUMENT_TOKEN_TO_BE_REPLACED