Kids First: How to Put Children Ahead of Broken Relationships 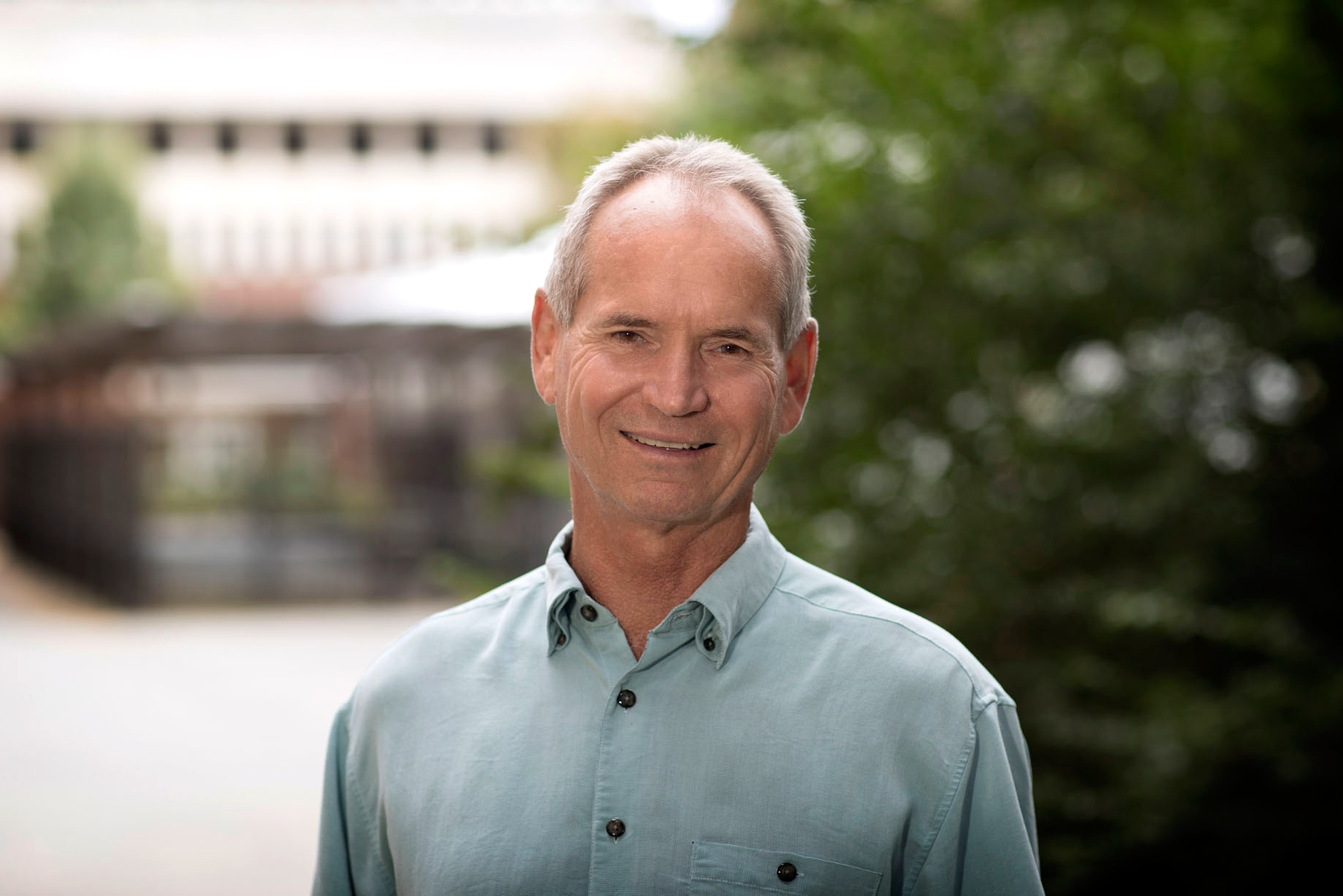 University of Virginia psychology professor Robert Emery’s message to divorcing couples is simple; parents should be parents so that kids can be kids.

With divorce rates reaching nearly 50 percent in the United States and more than 40 percent of children being born outside of marriage, more and more children are at risk of losing their childhoods because their parents cannot, or will not, put their differences aside. Behaviors like bickering and pitting one parent against the other endanger kids’ few precious years of childhood and can set them on the path to unhealthy relationships in their own lives, Emery said.

“Two Homes, One Childhood: A Parenting Plan to Last a Lifetime,” is Emery’s fifth book on divorce and his second aimed specifically at parents.

He says as hard as it can be, parents must rise above the sadness, anger and heartache to focus on their parenting plan, one that takes into account a growing child’s evolving physical and emotional needs.

“Really, the only plan for raising kids in two homes that will last a lifetime is one that grows and changes along with kids’ and families’ changing needs,” Emery said in his office in Gilmer Hall.

Parents need to take charge of their own plans, not the courts, and Emery’s book offers practical advice on how to parent throughout the span of a child’s life, from infancy to emerging adulthood and beyond.

Emery knows of what he speaks. In addition to directing UVA’s Center for Children, Families and the Law, he is a divorce mediator and the father of five children from two marriages.

He writes upfront in his book that “divorce stinks,” no matter the circumstances, be they infidelity or incompatibility. Still, couples are bound together forever if they have children.

So what happens if one parent is willing to do the hard work to provide a good childhood and the other is not?

“It’s all about keeping the kids out of the middle,” he said. “I tell parents in a really bad situation that many people who think they cannot settle in mediation eventually find that they can. I tell people to keep trying, because maybe it’s horrible now, but maybe after a couple of years things will change.

“If nothing else, even if the parent is a complete jerk, I still really urge parents to do the right thing, partly because it takes two to keep a conflict going and if you don’t play your end, it’s hard for the other parent to keep fighting back.

“If they are jerks, the kids will know, they will discover it and the parent who puts his or her children first will benefit in the long run.”

A Hierarchy of Children’s Needs in Two Homes

In 1943, American psychologist Abraham Maslow created Maslow’s hierarchy of needs, a theory that prioritized human needs and culminated in self-actualization. Basic, essential needs are at the bottom of the hierarchy, with things like love and belonging nearer the tip of the pyramid.

Emery has done something similar, basing his original, evidence-based hierarchy on the needs of children growing up in two homes. 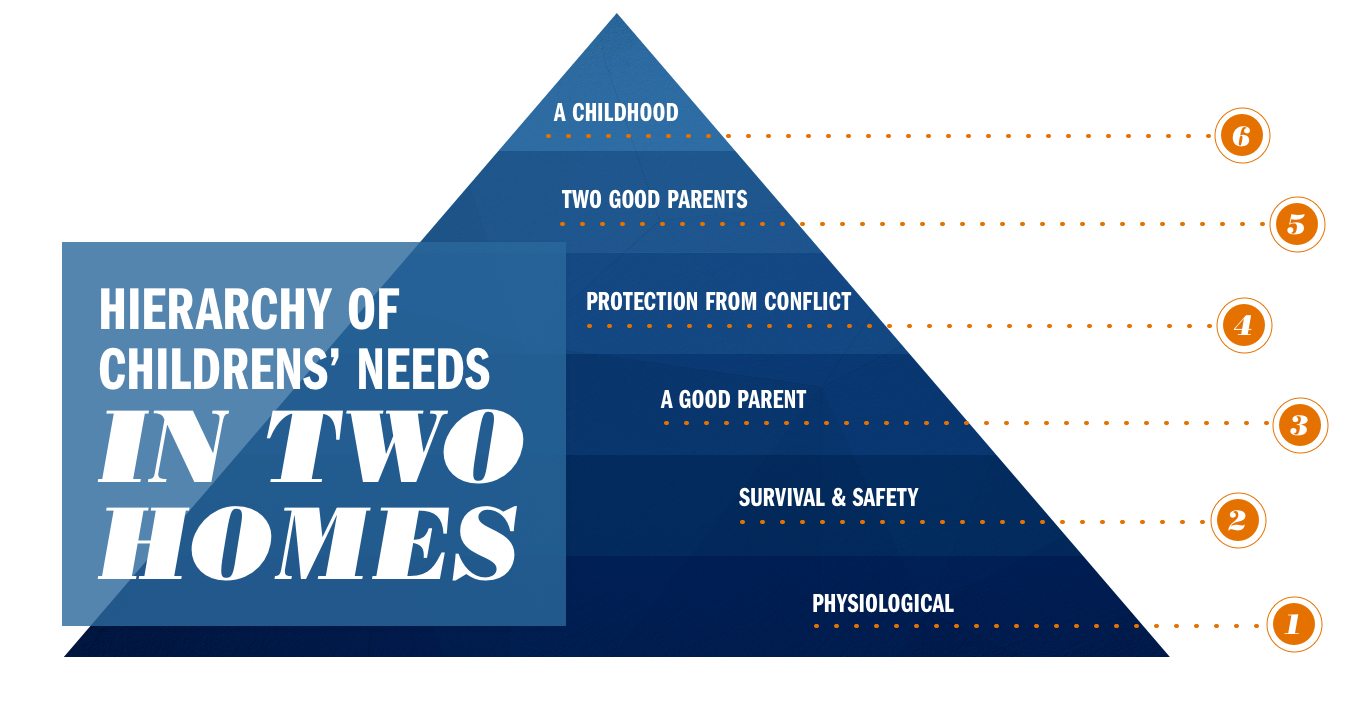 In his book, Emery stresses that he wants very much for children to have good relationships with both parents. But if that is not possible, his research finds “living in the middle of a war zone between two parents is more harmful to children than having a really involved relationship with only one of them.”

Strategies for a Lifetime, Year by Year

Emery organizes “Two Homes, One Childhood” by the developmental stages of childhood. He writes that parents need an evolving plan when children are young. While there is not a “one-size-fits-all” solution, Emery said for infants during the attachment phase, it’s usually best for the child to spend most nights in a “headquarters” home, usually with the mother.

“As that child becomes a toddler, more overnights with Dad get built into the equation. By the time they get to preschool, maybe parents are dividing the week and then go to a week-to-week arrangement by the time a child is school-aged,” he said.

However, while teens get input, they don’t get to decide. Emery tells the story of his oldest child, Maggie. “She came to me and said she was tired of the back-and-forth. She wanted to live in one house. At that time, I had four more kids and her mother didn’t have any more children, so she said, ‘I want to live mostly with Mom.’”

But instead of agreeing to that immediately, Emery told her, “‘We’ve got to talk about it,’ and we did. We had long talks and we went on drives, which I always recommend for talking to teenagers because they can’t run away,” he said. “Eventually, I agreed with her point of view. But I made it very clear to her that it was not her decision. It was my decision.”

That point, Emery said, is essential, because he didn’t want teenage Maggie to have the authority – or the weight of the responsibility – for making that decision. “It’s an adult decision,” he said.

In this regard, Emery said divorced parents and married parents are not so very different, yet society treats them very differently. One of his big goals is for parents, regardless of marital status, to act more the same and for practitioners in legal and mental health systems to treat them more the same.

“I’d like parents who live apart to think of my book as kind of a ‘Dr. Spock’ for raising kids in two homes,” he said. Spock’s influential book, “Baby and Child Care,” published in 1946, became a best-seller and remains popular today.