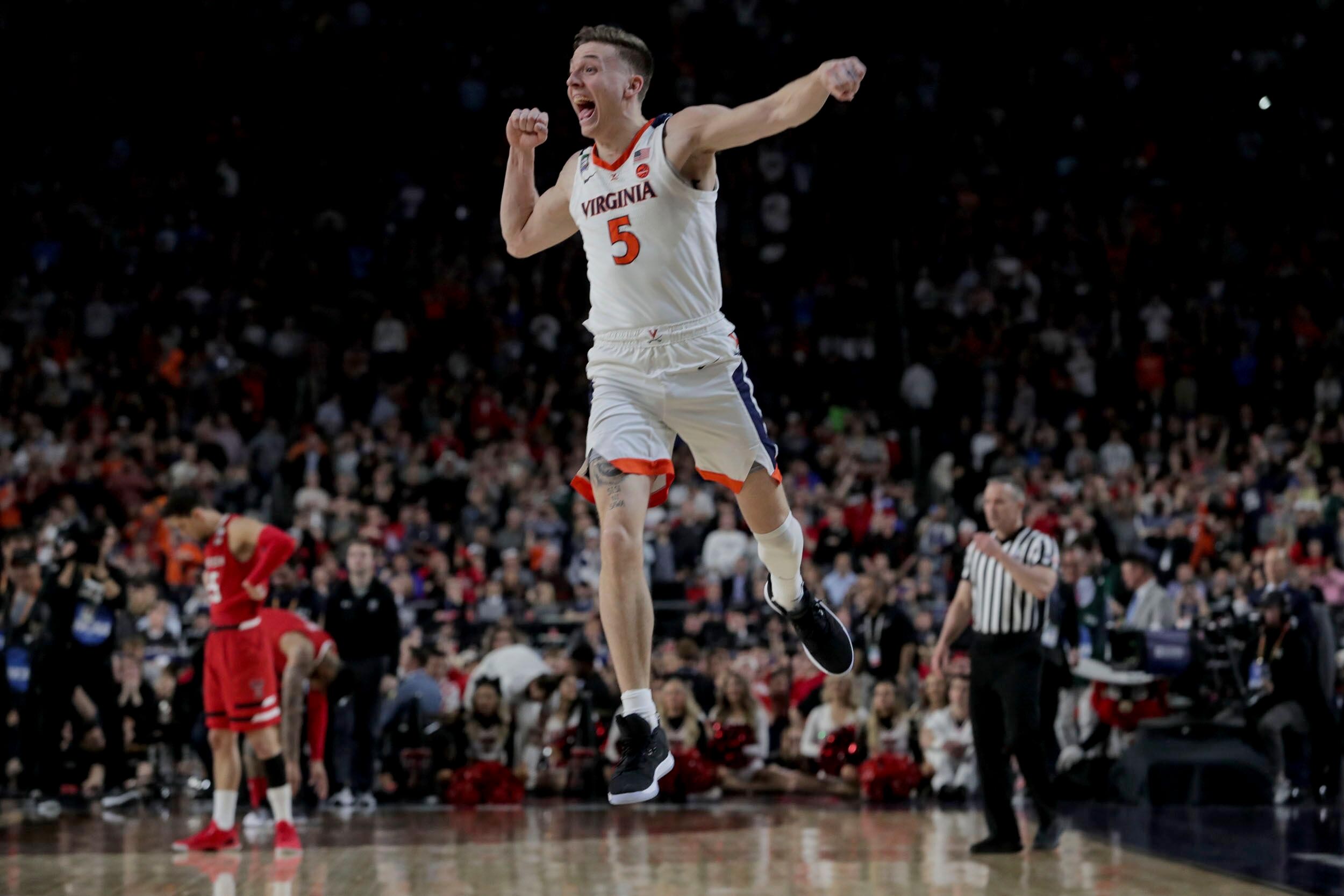 In a span of four months, Kyle Guy celebrated an NCAA basketball title, heard his name called in the NBA Draft and married Alexa Jenkins, his longtime sweetheart.

Yet another highlight for Guy will come Friday night, when he and the other members of the University of Virginia’s 2018-19 men’s basketball team are honored during “A Night With the National Champions” at John Paul Jones Arena. The event will include the presentation of championship rings and the raising of the NCAA title banner.

“I’m pretty excited,” Guy said by phone from Sacramento, California, where he’s training for his rookie season with the NBA’s Kings.

“I’ve been thinking about it a lot, because of how much people are talking about it on social media and through the grapevine. I’m super-amped to be able to hoist the banner and get our rings, and I’m glad that a lot of us can come back. I think it’s going to be a good last time to actually live in that moment, because after that it’s pretty much back to reality.”

Of the players who have left head coach Tony Bennett’s program since the end of last season – Guy, De’Andre Hunter, Ty Jerome, Jack Salt, Marco Anthony and Francesco Badocchi – all except Salt and Anthony will be in town for the event.

Guy, Hunter and Jerome were chosen in the NBA draft, and Salt is playing professionally in Poland. All played prominent roles during a season that included the Wahoos’ first Final Four appearance in 35 years and ended with the program’s first NCAA championship.

UVA’s postseason run included heart-stopping comeback victories over Purdue in the Elite Eight, Auburn in the NCAA semifinals and, finally, Texas Tech in the championship game. Against Auburn, Guy scored six points in the final 7.4 seconds – the final three coming on free throws with 0.6 seconds left – to send the Cavaliers to the NCAA title game for the first time in program history.

“There’s just not a better way to end a career than the way that Ty, Dre, Jack and I did,” Guy said. “I just want to be remembered as a champion and as a high-character winner. Some of my favorite memories from the tournament are just the little stuff during the games, how me and Ty had our handshake, or me and Dre were laughing that he can’t hit a 3 and I can’t hit a 3, just the way we communicated and really came together as a team in order to get the job done.”

The Cavaliers’ historic feat “comes up pretty much everywhere I go,” Guy said, “so I get to vicariously keep telling the stories and live through it again. I don’t know when it’s actually going to settle in and I now can be like, ‘I’m a national champion.’”

He hasn’t been back to Charlottesville since the spring, in part because of his summer schedule. In late July, Guy and Jenkins were married in Hawaii. She recently started law school at Notre Dame.

Guy laughed. “I’m bored out here, right? My wife is not with me, so I have a lot of time to myself, and I’m on ESPN-Plus watching these 30 for 30s, and I’m still in awe of what we accomplished and how it was done. Again, it just excites me to get back on Grounds and be around the fans and the team again.”

One of his closest friends, Nash Griffin, is the starting punter for the UVA football team. They were classmates and hoops teammates in their hometown of Indianapolis, first at Belzer Middle and then at Lawrence Central High.

Guy follows UVA football passionately, as evidenced by his postgame takes on Twitter.

Pros:
- DL showed a lot of pressure (Faumui in particular)
- Mike Hollins looks very legit
- We can score with anyone in country

Cons:
- INTs (not worried at all)
- Depth (good to get young guys reps)

Virginia plays Notre Dame in South Bend, Indiana, on Sept. 28. Guy hopes to attend that game, but it may conflict with the Kings’ training camp.

No such issues surround the Cavaliers’ next game. At 7:30 p.m. Saturday, No. 25 UVA meets ACC rival Florida State at Scott Stadium. Bennett and his players will be recognized during the game.

Guy is thrilled about combining his two favorite sports on the same weekend at UVA.

“One hundred percent,” he said. “I don’t think anyone understands how excited I am, No. 1, to come back for [the JPJ event] and celebrate that, and then cheer on another team that is a part of UVA. I’m really hoping that it’s going to be a super-big crowd and we can get a ‘W.’ That’ll complete the weekend, for sure.”

For Guy, one of the joys of life on the West Coast has been watching football on weekend mornings.

“On Saturday, I wake up and Ohio State’s already up 7-0,” he recalled, laughing. “I’m just watching [football] all day, and it’s over by like 8 p.m., so I can still get whatever I need to get done. I’ve got the whole night, so it’s pretty marvelous.”

The NBA draft was held June 20, and it was a memorable night for Virginia, which had three players selected for the first time since 1987. The Lakers picked Hunter at No. 4 and later traded him to the Hawks. Jerome went to the 76ers at No. 24 and was later traded to the Suns.

Finally, the Knickerbockers chose Guy at No. 55 and then traded him to the Kings, whose director of amateur scouting, Gene Cross, is a former UVA assistant coach.

“I haven’t had too many long encounters with him,” Guy said of Cross, “but he seems like an awesome guy.”

Guy signed a two-way contract with Sacramento in early July, which means he’s likely to split time between the Kings and their G-League team in 2019-20.

“It’s exciting to see where the program has gone and how the players have improved and progressed and been able to stick in the league,” Guy said, “which not a lot of universities can say, especially universities where you’re told you can’t go pro through that system. It’s pretty neat.”

Guy, Hunter and Jerome, who each left UVA with eligibility left, remain close.

“I talk to Ty and Dre once a week on a text thread,” Guy said, “and we play video games together sometimes. We have Twitter DM and Instagram DM, and we just send videos every single day. So we technically talk every day, but meaningful conversation is about once a week.

“Obviously, we’re busy. I’m trying to make the [Kings’] official roster. They’re trying to find their spot and their rhythm in their respective organizations.”

Guy quickly became a fan favorite with his play for the Kings’ summer league team, first at the California Classic in Sacramento and then in Las Vegas. The Classic was held at the Kings’ arena.

“It didn’t sell out, but there were a lot of people there for at least two out of the three games we played at the Golden 1 Center,” Guy said. “It was really cool and neat to see the atmosphere that we’ll be playing in. It was a really great experience, and I felt like I played well and I proved myself. I still have leaps and bounds to go, but I was pretty happy with how I played.”

After winning only 27 games in 2017-18, Sacramento improved to 39-43 last season. Its roster includes such promising young players as De’Aaron Fox, Marvin Bagley, Harry Giles and Buddy Hield, and the Kings’ traditionally strong fan base is again invested in the team.

“It’s nice that they have nothing else to cheer for except for basketball,” Guy said. “A lot of people here are 49er fans. Being a football fan, obviously I would like to have [an NFL] team here, but the flip side is, they’re crazy about basketball, which is more important to me, obviously.”

A Year We Will Never Forget: 2019-20 in Review END_OF_DOCUMENT_TOKEN_TO_BE_REPLACED

‘What Will You Carry With You?’ Remarks From UVA President Jim Ryan END_OF_DOCUMENT_TOKEN_TO_BE_REPLACED