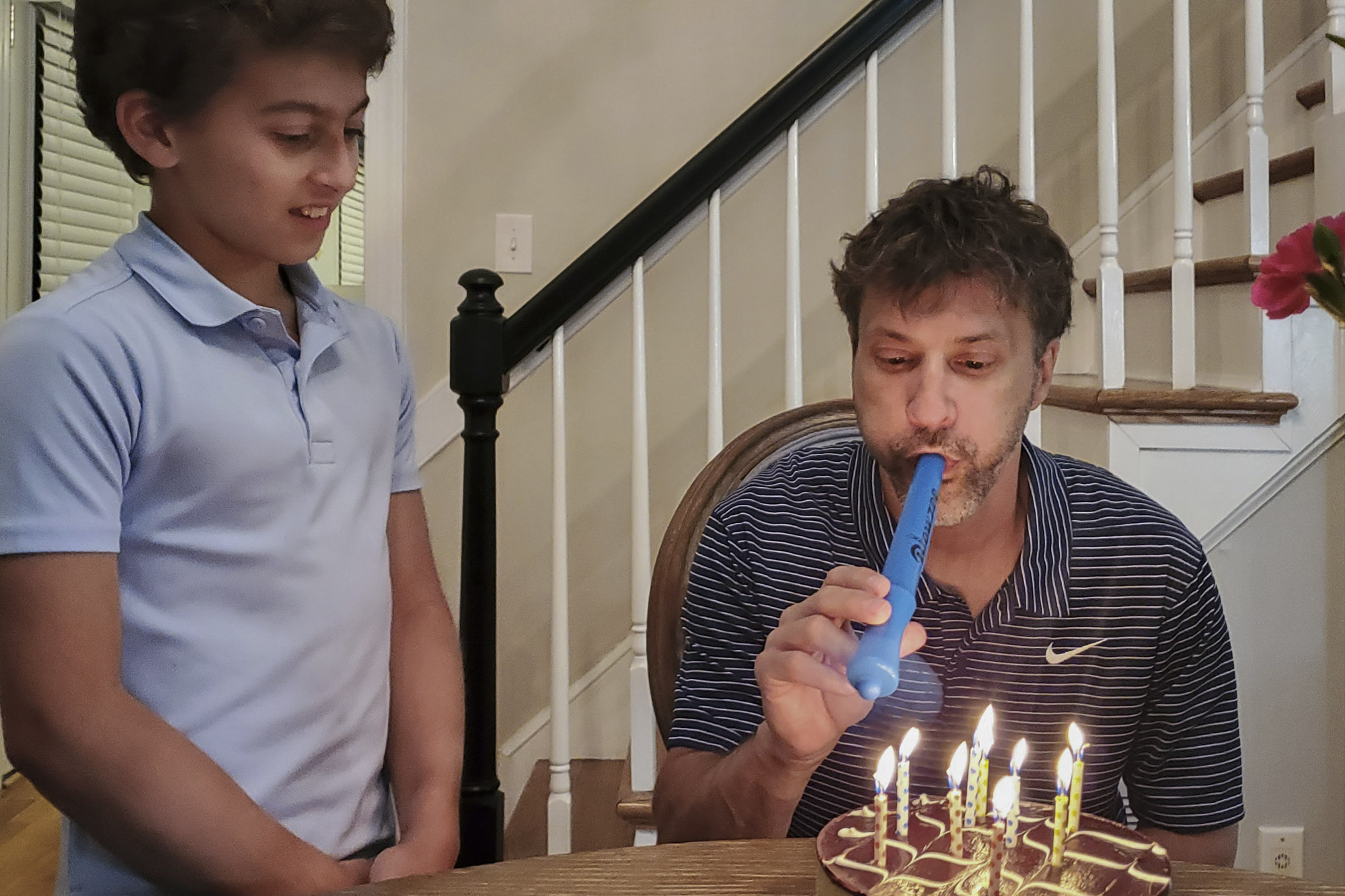 It all started with a video of a small child with a runny nose trying – and failing – to blow out the candles on his birthday cake. He had not quite mastered the blowing part and, well, you get the idea. Appetites were lost watching the spectacle.

The video struck a chord with Mark Apelt, a 2000 graduate of the University of Virginia. He and his friends “were laughing and joking about that,” he said recently from his home in Richmond. The conversation led to comments about the “weird” tradition of blowing out candles on birthday cakes.

“There’s really no other food that you would do that to. You know, blow all over it and then serve it to your friends and family,” Apelt said.

That was in January 2020, “pre-COVID,” Apelt said. But as the coronavirus quickly spread, it became readily apparent to Apelt that the tradition of blowing out birthday candles had long outlived its expiration date.

So, armed with his UVA degree in environmental science, Apelt and his assistant, his 12-year-old son Jake, began tinkering with the idea of creating a new product to eliminate the unsanitary practice. Apelt, a stay-at-home dad and former high school environmental science teacher, and Jake suddenly had a lot of one-on-one time as Jake began what would become 15 months of Zoom school.

And what a tasty enterprise it was. Over the course of several months and product iterations, Jake selflessly did product testing, one cake at a time.

“I think we went through about 60 or 70 cakes over a six-month period,” Apelt said. (Jake was unavailable for an interview because he was at summer camp.) “I was constantly buying new cakes and trying things out. So, Jake enjoyed that part quite a bit.”

Thus was born the “Blowzee.” The size of a piccolo, it is powered by a combination of blowing and a lithium battery (which is included in the $9.99 purchase.) A small fan at the end of the Blowzee spins, thereby blowing out birthday candles. The spit-free device is not dishwasher-safe, but can be wiped clean.

It has become insanely popular and been featured on “The Tonight Show With Jimmy Fallon,” the “Elvis Duran in the Morning Show,” NPR’s “Morning Edition” and The Daily Mail, a newspaper in London.

The Blowzee: A UVA Family Affair

Apelt filed his patent for the Blowzee last summer, found a manufacturer, and before long, orders were pouring in. He, Jake and wife Marcie hunkered down in the garage, filling and mailing orders as fast as they could. Marcie, a 1998 graduate of the McIntire School of Commerce, also threw her marketing expertise into the family project.

Apelt’s initial run of 5,000 Blowzees is nearly gone. For now, customers can purchase the Blowzee on Apelt’s website, Amazon and at local grocery stores in Richmond. The inventor is in talks with some big-box stores like Walmart and Target, as well as national grocery chains Publix and Wegman’s. He is hoping to have his second shipment of Blowzees in about a month.

Once Apelt heard that Jimmy Fallon had mentioned the Blowzee in one of his opening monologues, he knew he had succeeded. “To be talked about on NPR and ‘The Tonight Show,’ that’s a check on my list of life goals,” he said. “If I never sell another Blowzee, I’m still happy with the success we’ve had.”

What’s Next for UVA’s Class of 2022? END_OF_DOCUMENT_TOKEN_TO_BE_REPLACED