Librarian Advises Students to Occasionally Unplug From the Information Flood 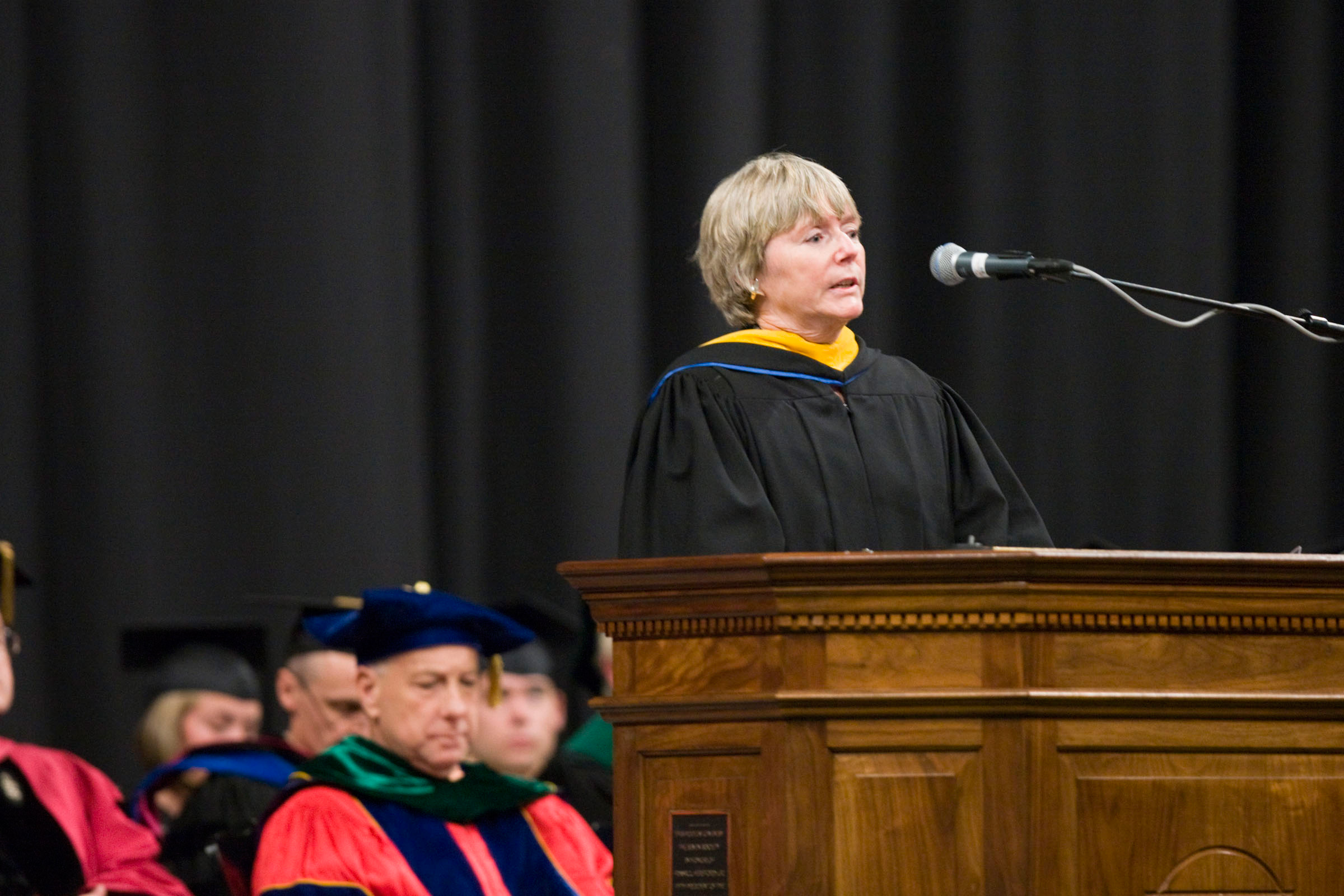 October 24, 2008 — University of Virginia Librarian Karin Wittenborg advised students at Friday's Fall Convocation to understand the difference between knowledge and information and to shut off their electronics — at least occasionally.

Wittenborg gave the address Friday at the ceremony, where honors were conferred upon 375 third-year students who rank in the top 20 percent of their class.

Wittenborg told the students they were "privileged to live in a time of information abundance," but warned that while today's inexpensive technology keeps them connected to their world, it robs them of precious time by flooding them with information.

While modern students have developed filters to sift through the noise, she warned that people cannot do more than one thing effectively at a time. The flood of information is making it harder to concentrate, she said.

To combat this, Wittenborg advised students to make time for their "eureka" moments, when they develop insights into life and the world. Time is "critical to your ability to come up with your own ideas, to acquire true knowledge, and to gain insights that are the real rewards of the education you're receiving at this great University."

She suggested students turn off their devices, close their books and "take a walk. Or better yet, take a nap. Students need a break from stimulation. The 'aha!' doesn't happen until your brain has a chance to relax."

"When you leave class, don't reach for your cell phone," she said. "Don't check your text messages. The Twittering can wait. Give yourself the mental space and the time your brain needs for 'big thinking.' Just take a walk, and let your mind wander with you.  Knowledge and insight are sure to follow. You can count on it. "

University President John T. Casteen III told Wittenborg that it was "sound advice" and noted that he had lost both his cell phone and his BlackBerry earlier in the day.

After bestowing intermediate honors upon the third-year students, Casteen presented the Thomas Jefferson Awards. This year, in a break with tradition, awards were given to two recipients. The only other year in which two recipients were honored was 1976.

Casteen also recognized the recipients of 2008 teaching awards, which were announced in the spring.

A Year We Will Never Forget: 2019-20 in Review END_OF_DOCUMENT_TOKEN_TO_BE_REPLACED

‘What Will You Carry With You?’ Remarks From UVA President Jim Ryan END_OF_DOCUMENT_TOKEN_TO_BE_REPLACED