Life as Research: Carolyn Welford Is at Once a Nurse, Student and Patient 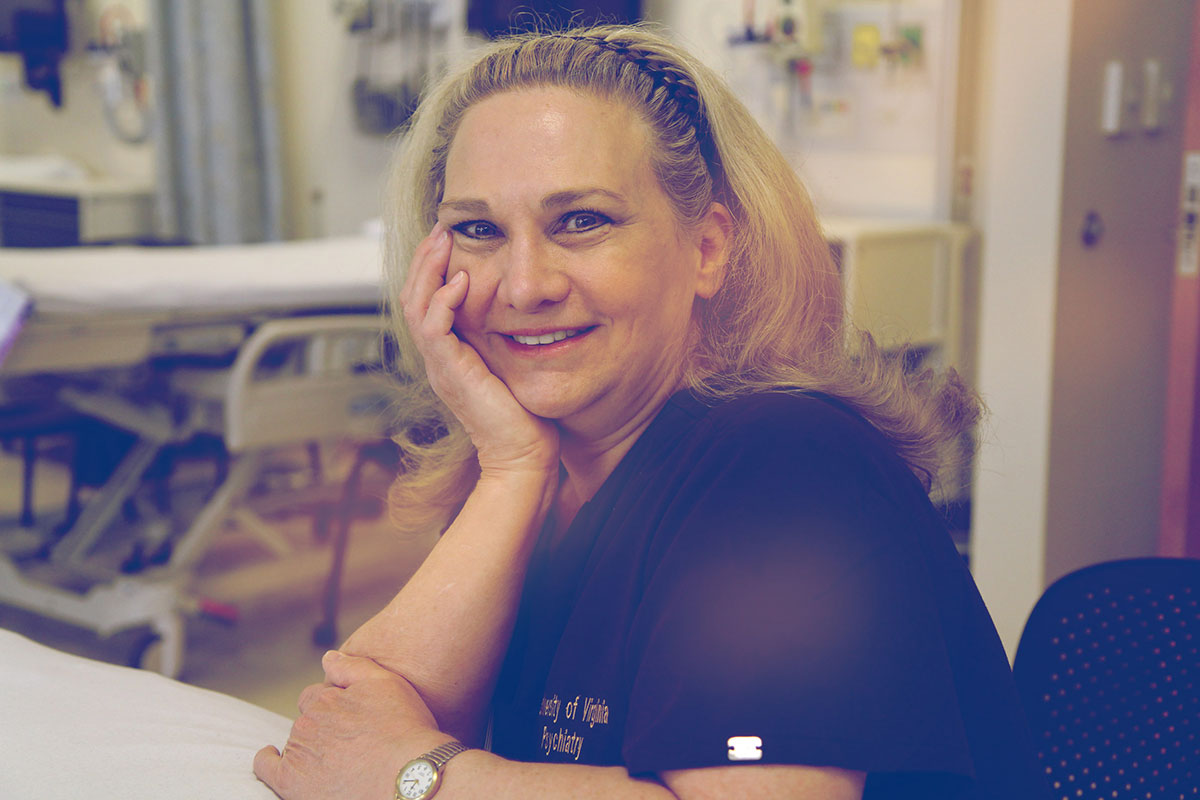 When University of Virginia student Carolyn Wellford’s surgeon asked last November if she’d be willing to enroll in a clinical trial on an experimental radiation schedule, even she was shocked by the alacrity of her patient’s answer: Unequivocally, absolutely, positively yes.

“Before they could even get it out of their mouths, almost,” laughed Wellford, “’I said, ‘Yes, yes, yes.’”

If Wellford-the-patient is not exactly run-of-the-mill – given that she’s already a psychiatric nurse at UVA Medical Center, a School of Nursing student in the R.N.-to-B.S.N. program and a budding researcher herself – her cancer, thankfully, is. Diagnosed with ductal carcinoma last October after a routine mammogram, Wellford had a biopsy, followed by two surgeries with UVA surgeon Shayna Showalter, the last of which removed a lymph node under her arm.

The experimental therapy she signed on for – involving a single blast of cancer-killing radiation, rather than the traditional six weeks of smaller, more-spread-out doses – seems to have had the desired effect so far, though Wellford will require at least five years of medication and routine infusions to prevent bone density loss, a common side-effect of the therapy.

To Wellford, the change to be of service as a research subject – and the intimacy of her participation in Showalter’s clinical trial – feels less an invasion than an opportunity. The experience has further compelled her own interest in nursing research, and urged her in new academic directions.

“To me, if I’m asking people personal questions about their health [as their nurse],” Wellford reasoned, “I should be willing to open myself up as well. Maybe what I’m doing can help someone else down the line.”

Showalter’s therapy – which used CT-based, three-dimensional radiation delivered directly to the tumor site – minimizes exposure of surrounding healthy tissues. The experience has made Wellford, who’s slowly returning to normal at work, school and with her family, even more certain that her professional future lies in nursing research in addition to bedside care. She’s already studied Alzheimer’s disease and dementia, and completed a capstone on the Institutional Review Board approvals process that reviews the ethics of research on human subjects. She also has worked as a research assistant with NIH-funded nursing scholar Karen Rose, who studies caregiver stress, dementia and solutions for incontinence.

And while she’ll walk the Lawn this spring when she earns her Bachelor of Science in Nursing degree, she’ll return next fall when she begins work on a Ph.D. in nursing, proud to be joining a the research arm of a profession that puts her around “caring, kind, compassionate people.”

“It truly is beyond my wildest dreams,” she said. “I remember falling in love with UVA when my daughters were looking at schools, and recall being on the Lawn, and looking around and thinking, ‘Gosh, this is just fabulous.’ I never dreamed I’d actually be doing it myself.”