‘Look for the Helpers’: Nursing Students Hone Their Skills on the Streets 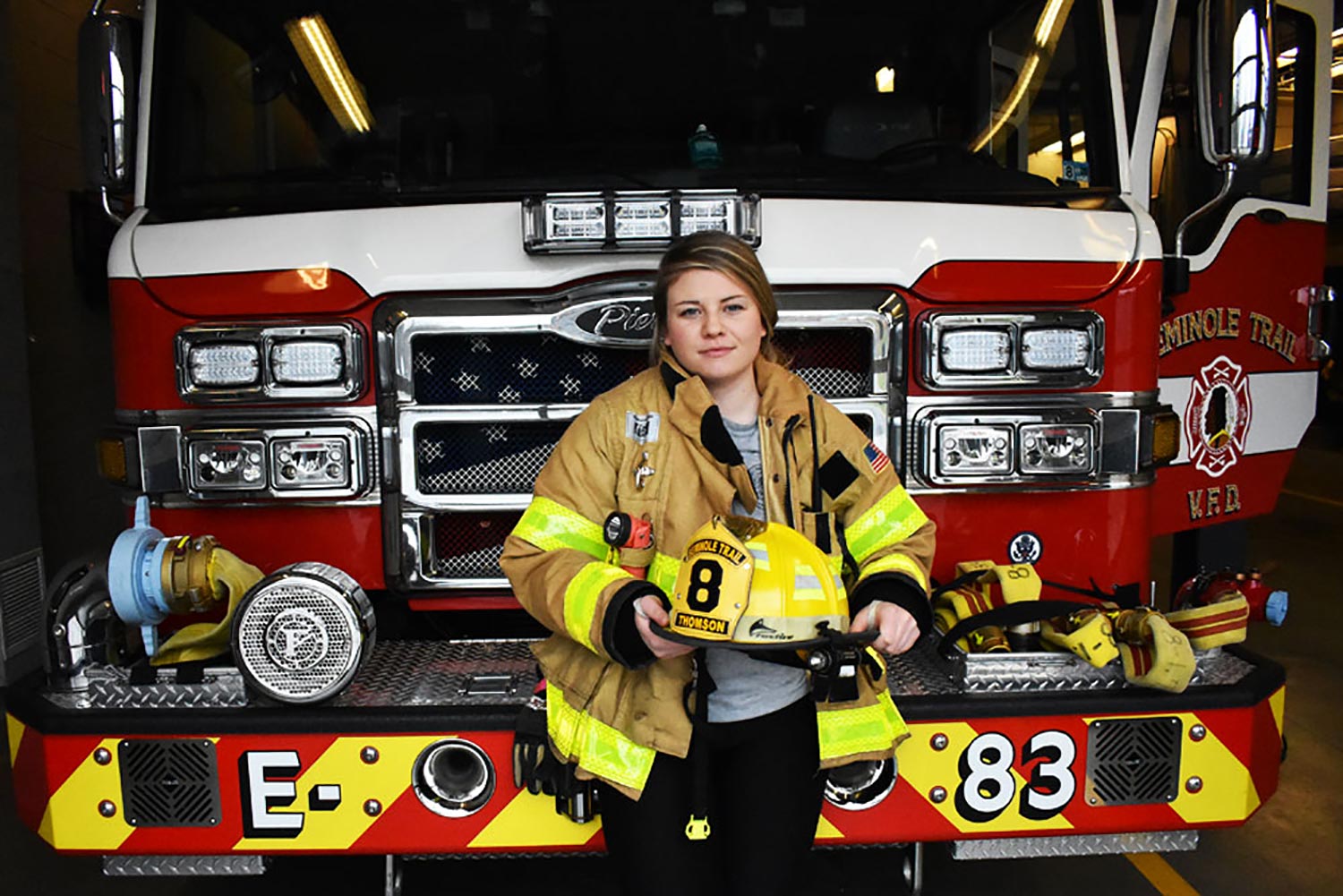 It’s a Sunday evening, about suppertime, and the patient – a 71-year-old man with type 1 diabetes – lolls in and out of consciousness deep in the folds of an overstuffed armchair, a NASCAR race on TV and the smells of the dinner, not yet served, mixing with the pulpy heat of the woodstove.

University of Virginia nursing student Ryan Thomas, who moments before was riding shotgun in an ambulance, a map sprawled across his lap, expertly snaps on a pair of blue rubber gloves and addresses the patient whose family dialed 9-1-1 when he became unresponsive.

“Carl?” [not his real name] Thomas says gently, touching the man’s arm, “Do you know what year it is?”

“CARL,” Thomas booms, now twice as loud, “CAN YOU TELL ME YOUR LAST NAME?”

On this evening, the Western Albemarle Rescue Squad team – a group that includes Thomas, Haydon Pitchford, Taylor Vest, David Clarke and Kassie Sadler – is responsible for covering the roughly 260 square miles that make up this portion of the county. WARS, as it’s known, is one of a dwindling number of all-volunteer rescue squads in the area. With eight trucks, two kayaks, and bags of mobile medical supplies, they respond to calls across the socio-economic and situational spectrum: from the paved cul-de-sacs in high-end subdivisions to pitted-out dirt roads and modest trailers and cabins deep in the Blue Ridge foothills. 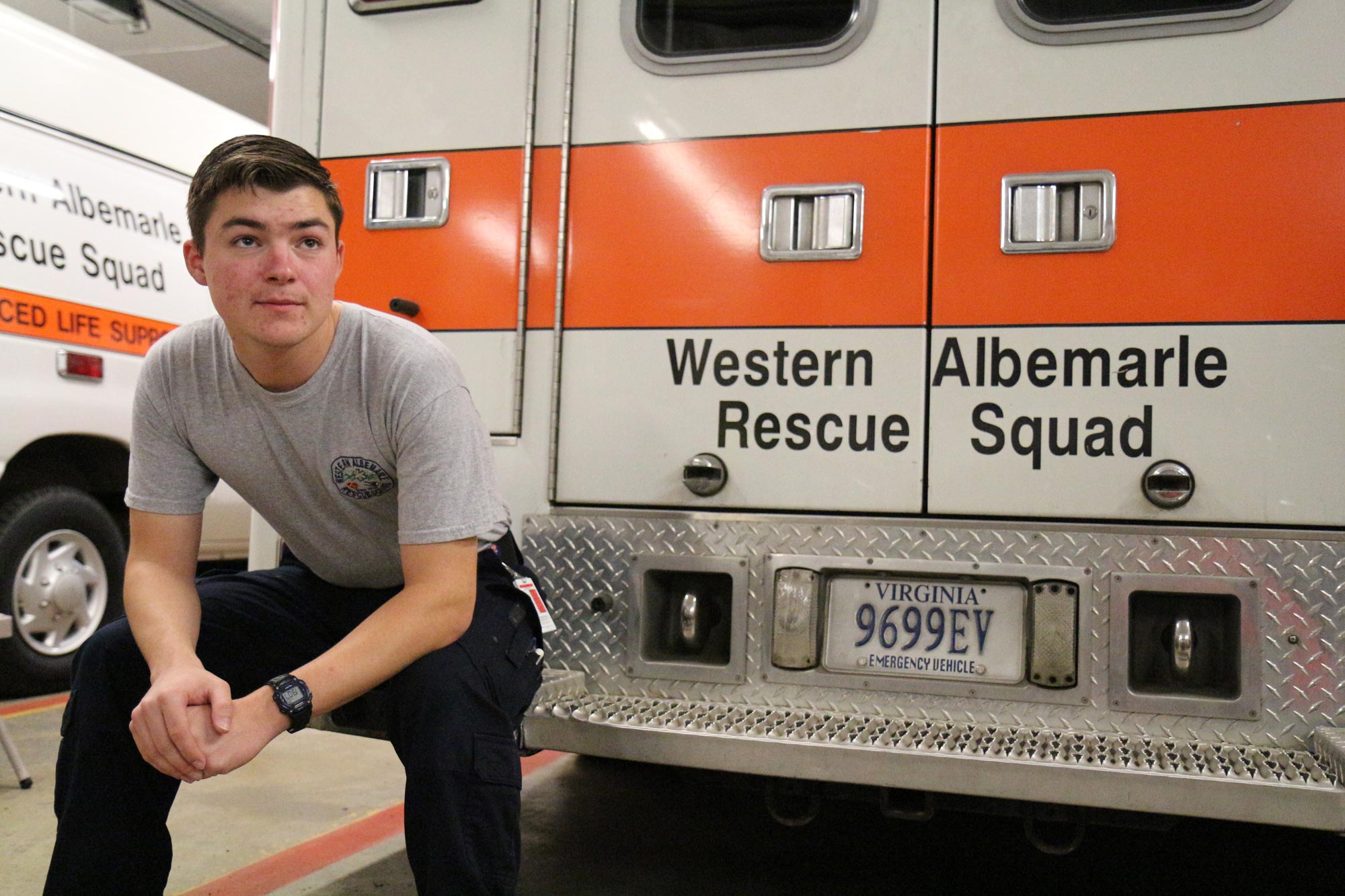 Their call tonight is like a well-choreographed dance; they pivot easily around the patient and one another with practiced grace. This is the Sunday night crew, on each week from 6 p.m. to 7 a.m. the next morning, and for one 24-hour shift every six weeks.

To Thomas, 22, an advanced EMT, it’s the best part of nursing.

“Yes, I wanted to give back to my community in a genuine, unique way, and yes, I want to hone my skills,” says Thomas, of Lovettsville, who first volunteered for his hometown rescue squad at age 16, “but I’m also here for the fun, even though it’s not strictly fun: the thrills, the camaraderie of the team, and to have this second family.”

“Look for the helpers” in tough situations, Mister Rogers advised. But if nursing schools are filled to the brim with those wishing to do good, some – including students Thomas, Sam Anderson, Aliana Kyle, Raniyah Majied and Alice Thomson, along with alumnus Andrew Baxter, Charlottesville’s fire chief, along with many, many others – embrace the role even more deeply. They are emergency responders, every inch of them a helper.

“If you really want to know a community, go talk to the firefighters, the paramedics, the social workers. At some point, every slice of society needs our services.”

Seeing Beyond the Hospital

For some, emergency response work made visible a path to nursing school. That was true for Alice Thomson who, even as she changed academic pursuits – first English, then public policy, then government relations – kept the constant of volunteering as an emergency responder, which ultimately led her to nursing.

“The best way I can describe nursing,” says Thomson, now in her first year of UVA’s clinical nurse leader master’s program, “is that, once I was doing it, I realized it was a lifelong dream I never knew I had.”

She’s also found the emergency work deeply influences her nursing, particularly in her current role in UVA’s Emergency Department, where so much depends on a broad understanding of a patient’s situation – details emergency responders often see, and describe to providers at the ambulance/hospital door hand-off.

“It’s shown me how important it is to know what that patient’s life is like when they dial 9-1-1,” says Thomson, who volunteers each Wednesday as fire captain at Seminole Fire and Rescue in Charlottesville. “The more information you have from the very beginning, the more holistic your picture is going to be for what your patient really needs.”

That holistic vantage is one that Chief Baxter, who earned his B.S. in nursing from UVA in 1994, sees and appreciates, too. Baxter came to nursing after accepting a job with UVA Hospital’s weight and lift team in 1990, observing emergency responders on the Pegasus helicopter and “quickly realizing, in terms of translating my interests into education and a career, that the nursing profession was the best way to do that.”

During nursing school, Baxter volunteered with Charlottesville-Albemarle Rescue Squad, and appreciated how its practical, boots-on-the-ground work strengthened his experience, critical thinking and leadership skills, while profoundly deepening his understanding of the community. It was a view, he recalls, of the social determinants of health that work in the hospital simply didn’t offer.

As an emergency responder, “You’re in people’s homes, you’re in their lives at times when they’re incredibly vulnerable, and it’s an incredibly intimate experience,” he explains. “You see people in a way that’s pretty rare. You could probably ask them those same questions in a primary care setting, but to be in their home, or to interact with them if they’re homeless – well, it’s a whole different level of understanding.”

“There’s a lot of things that you see that a lot of people will never see in their life,” Thomas adds, “and it’s a privilege to be part of that experience.”

For some, emergency response work provides a litmus test. Raniyah Majied took EMT classes at her Salem high school to see whether she could stomach a career in health care, in the process transitioning from taking classes to “make a grade” to “really wanting to understand the reasons why we do what we do” during emergency calls.

In addition to the technical, communication and critical thinking skills she gleaned from the volunteer work, Majied also found great meaning in offering small kindness, especially for isolated patients who, especially in older age, had few relationships. Even as she begins clinical rotations this spring, it’s already developed in her a love of geriatric nursing.

“Sometimes they’d say, ‘I called my daughter, but she didn’t answer,’ or, ‘I haven’t seen my kids in a really long time,’ or, ‘My spouse passed away,’” Majied says. “As a nurse, I’ll get a lot of opportunities to have these connections with people. I’m excited to be a nurse, and have way more time with them than I do as an EMT.”

Given their exposure to humanity across the spectrum, emergency responders’ situational agility, in turn, strengthens their confidence, poise and kindness.

“You’re going into people’s homes where they’re sick, and lying in bed,” second-year nursing student Sam Anderson explains. “So a lot of it is using very comfortable language with patients, being very polite and courteous, and giving them autonomy, or as much autonomy as possible, with the decision about how to proceed forward.”

That kindness and calm, Baxter says, fosters trust, and are traits people remember.

“People don’t write and tell me, ‘Boy, your fire crews did a great job deploying that inch and three-quarters attack line on that house fire,’” he laughs. “They write and say, ‘I can’t believe the care that your crew took so I could go back in the house and get my grandmother’s wedding dress.’ And that’s just phenomenal.”

Bringing it Back to the Classroom

Emergency responders aren’t just a boon in disaster. These student volunteers are influential in the nursing classroom, too, where nursing professor Bethany Coyne says they enrich and broaden discussions of topics that lie beyond skills-based competencies, like the interconnectedness of education and health, ethics case studies, and the social determinants of health. 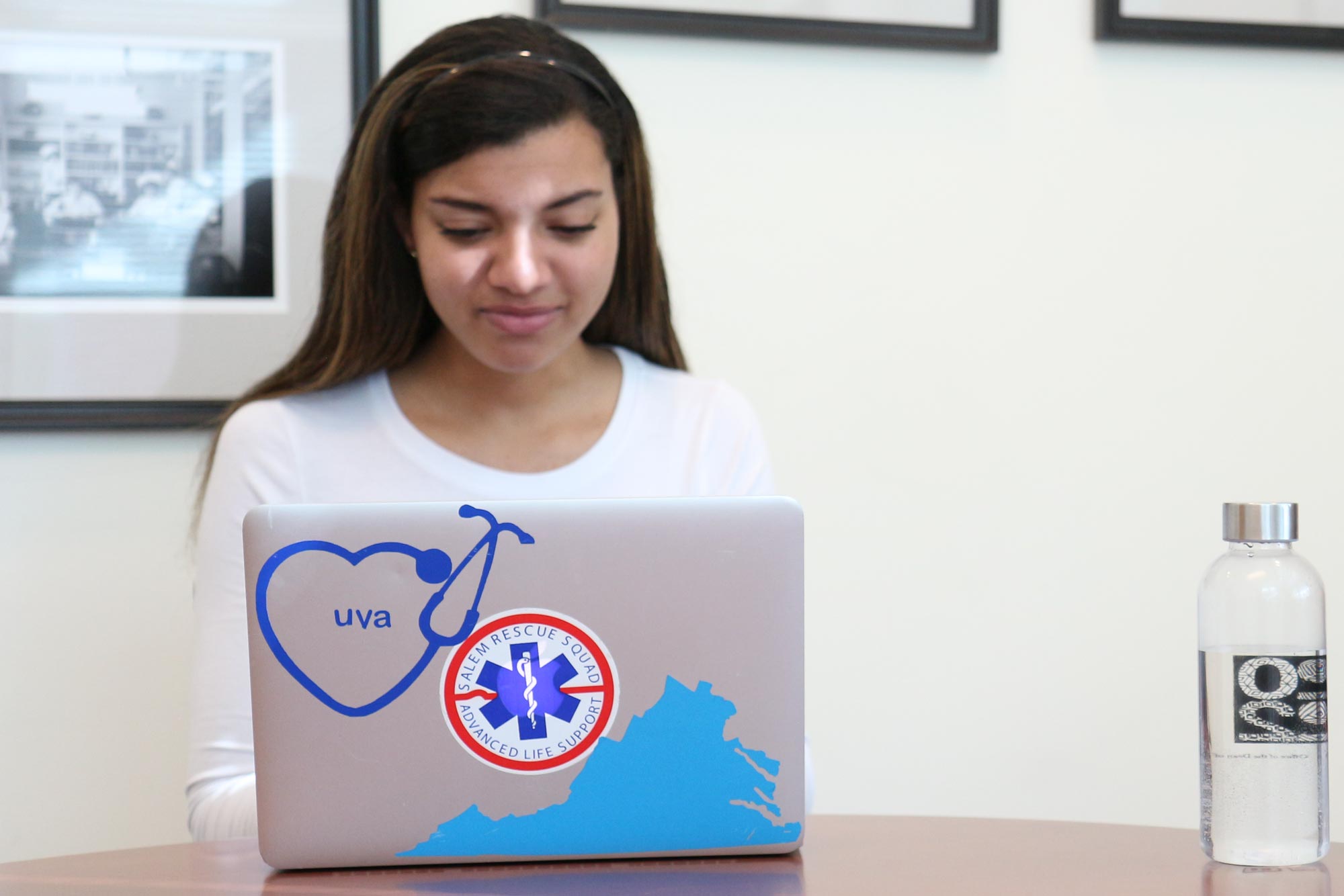 They also model confidence and calm, traits that are noted assets at the bedside and in the classroom. Their peers, Coyne says, take note – and heart – at their ability to think critically.

“They have all these experiences that are beyond the hospital walls,” Coyne says, “and they’ve seen patients and clients outside of the inpatient setting, and that perspective is really valuable.”

Thomson agrees that emergency work has strengthened her nurse’s confidence.

“You can have imposter syndrome when you walk into a patient’s room,” she says. Being a firefighter “has really given me a sense of confidence that I translate into patient care. If you can think on your feet and you can do something with nothing, you’re on your way to being a great nurse.”

Perhaps most of all, emergency responders do what they do to give back. Aliana Kyle, who grew up in Warrenton, became an EMT as a high school junior, driven by an invisible but palpable sense of purpose and vision. These days, her weekly volunteer work with the Seminole Fire Station on the northern side of Charlottesville – while challenging – has scratched an itch she felt as an EMT to learn firefighting, and encouraged her to develop the kind of mental and physical problem-solving skills she says she couldn’t necessarily get from a classroom, in a lab, or by reading a book.

Currently in training, Kyle has spent the last year learning the ropes: how to suit up in more than 40 pounds of gear in less than two minutes, how to properly flow water lines and hoses, how to queue engines and “throw” ladders, even how to use a chainsaw while perched on a roof. It’s exciting, exhilarating work, she says, and part of “doing hard things to achieve personal growth.”

“If you can think on your feet and you can do something with nothing, you’re on your way to becoming a great nurse”

And grow and learn, they do. Thomas, now an emergency responder for a half-dozen years, says emergency work has helped him understand the importance of resilience and well-being, particularly as he deals with difficult calls. Coming into contact with a range of human conditions, Thomas says, both challenges and strengthens his nursing – a field he says he wouldn’t have found without being an emergency responder first.

That he’s created a tightknit second family with his Sunday night crew is a powerful motivator to keep volunteering, too, reinforcing as it does the value of teamwork, friendship and support.

“I’m definitely more confident because I do this,” says Thomas, who graduates this spring and has plans to remain in Charlottesville, continuing his volunteer work with WARS. “With my team, I know we can together really help those who need it.”

That includes people like Carl, who, from his living room chair, received two bags of intravenous fluids from Thomas and Pitchford before groggily coming to, blinking open his eyes, and beginning to pick at a plate of peanut butter crackers and glass of orange juice from his mother that would keep his blood sugar stable and in the safe zone.

He even gets the team to chuckle when Thomas – to ensure that he’s fully functioning and doesn’t need a trip by ambulance to the emergency room – asks him who the president of the United States is.

“Somebody who’s about to find himself impeached,” drawls Carl, a half smile on his face, to which Thomas replies, “I think someone’s feeling better.”