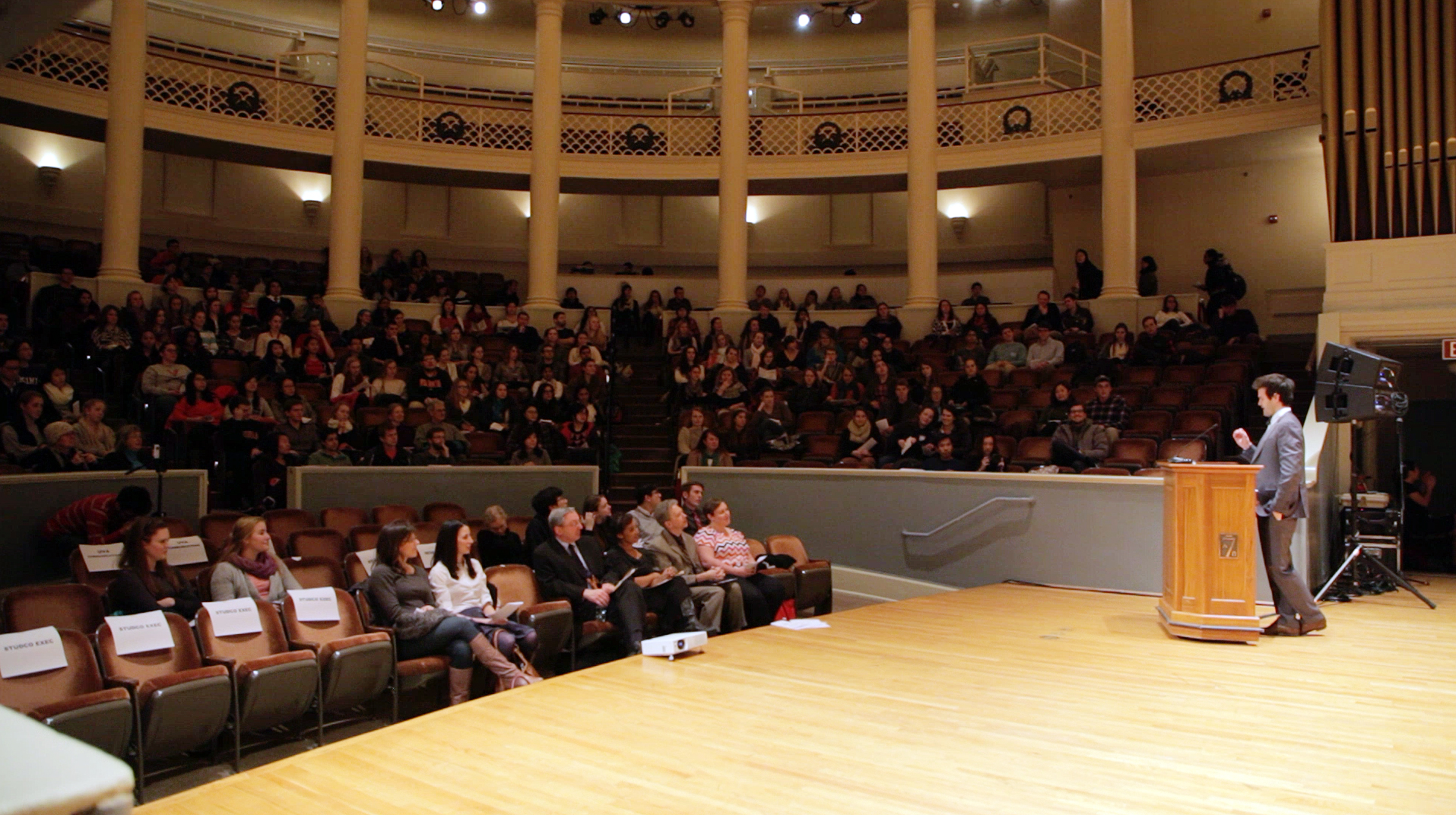 At the invitation of University of Virginia students, a handful of professors delved into issues close to their hearts earlier this week, covering topics ranging from the cultural cache of Disney movies to questions about our scientific assumptions.

Organizers of the fifth annual Look Hoos Talking event, held Tuesday in Old Cabell Hall, invited five student-nominated professors to speak on topics of their choice for 12 minutes or less.

“The spirit of the event isn’t that students are coming out to hear professors in their field,” said Harlin Oh, co-chair of Student Council’s Academic Affairs Committee, which organized the event. “You come out so that you can have a breadth of knowledge and an opportunity to listen to professors who you may never have a class with.”

For the featured professors, the lecture provides similar sentiment. Sarah Kucenas, an assistant professor of biology in the College of Arts & Sciences who spoke about the fallibility of science, was fascinated by the wisdom of colleagues with whom she does not interact daily.

“Even sitting in the audience, it was exciting to hear what others do and their ideas,” she said. “As a faculty member, I don’t get to take other people’s classes, so to be able to come and listen to these other brilliant people is pretty amazing.”

Nominations are solicited from students in each of U.Va.’s 11 schools every fall.

“If you’re a professor who is truly invested in the students of the University and are eager to share that wealth of knowledge, I think that it’s validating to see that recognized by students,” Oh said.

The Good Kind of Wrong

Kucenas, however, sees the benefits of being wrong.

She looked to Galileo, who according the church was wrong when he posed that Earth was not the center of the universe.

Kucenas said while there are still absolute wrongs and intentional wrongs, there also can be good wrongs. “I’m talking about the kind of wrong that is the good kind of wrong; the right kind of science,” she said.

Kucenas says that in the last 50 to 100 years, it has become taboo to be wrong or to have someone reinterpret scientific data.

“It’s a feed-forward loop. We’re afraid of being wrong, but if we publish in the best journals, people are less likely to think that we’re wrong, so then we’re right even though we’re still wrong,” Kucenas said, while asking if that makes sense.

Kucenas sees an issue with the fact that textbooks depend on the articles in the top journals.

“There could be up to 10,000 new articles published [between textbook updates], but if they didn’t land in the top-tier journals and they didn’t substantiate what is known as dogma, and therefore considered right, even though they’re wrong, then they didn’t land in textbooks,” she said. For Kucenas, the issue is that students are missing out on a great deal of knowledge as a result of the competition between right and wrong.

Kucenas pulled from her own research as an example. She uses zebrafish in her lab to look at the relationship between the central nervous system and peripheral nervous system. The “right” way to understand the nervous system is that these two halves are separate from one another; Kucenas’ research begs to differ.

Because her research questions the “rights” of science, it’s perceived as “wrong.”

“[My research] is an example of what you’re missing because I’m wrong. I’m so wrong, I’m right,” she said.

The Theory of Knowledge

In his internal debate between lecturing on why “It’s Always Sunny In Philadelphia” is the greatest TV show of all time and discussing the theory of knowledge in regard to critical rationalism, the latter eventually won out for Evan Pivonka.

Pivonka, a postdoctoral fellow and lecturer in the program on Constitutionalism and Democracy, outlined why a lack of critical rationalism is destroying our political system.

With an audience that varied in its knowledge of political theory, Pivonka first defined the term. “Critical rationalism is built on a fairly straightforward and simple premise: All objective knowledge must be negative in nature. In other words, we can never know something to be true in a positive sense merely from observation or experiment, but we can know something to be false,” he said. “Any hypothesis or theory that isn’t falsifiable – in other words, that can’t be proven wrong – isn’t a theory at all.”

On the other hand, critical rationalism prefers to consider the potential failings of an abstract plan. “[Critical rationalism] is practically attuned to listening to criticism, which searches out conflicting evidence and is eager to learn from mistakes and implement new politics,” he said. “It would have, I think, insisted on pulling the plug very early on the policies that led to the most recent financial crisis.”

Douglas Laycock, distinguished professor in the School of Law and professor of religious studies, took on the challenge of walking the audience through America’s religious history in 12 minutes.

For some in the audience, the question arose, “What is ‘the Puritan mistake’?” Laycock laid it out in simple terms: “Liberty for me, but not for thee,” he said.

Relying on a timely example, Laycock looked to the issue of same-sex marriage. “One of the ironies of the contemporary culture wars is that religious minorities and sexual minorities make essentially parallel demands on the larger society,” he said.

Laycock considered this parallel in relation to a Washington state florist who refused to provide flowers for a gay marriage, violating non-discrimination laws, and a Colorado baker who refused to print slogans that condemned same-sex marriage on a cake. In both cases, he said, Americans have been granted the absolute right to express disapproval of certain practices.

“Both sides see the argument [of refusing to allow their preferred practice] as absurd for themselves, but perfectly reasonable for the other side,” he said.

“We teach our children that America is committed to ‘liberty and justice for all.’ We need to do a much better job of the part about ‘for all,’” Laycock said. “The true test of liberty is if we protect the liberty of those we disapprove of.”

A Crowd Favorite: Why We Can’t Let Disney Go

As a professor in the McIntire Department of Art, Carmenita Higginbotham often finds herself distracted from the more traditional practices of art. The distraction comes in the forms of commercialized cartoons in Disney movies.

Higginbotham’s lecture introduced the social power that Disney wields as a result of the cultural statements that its movies make. By analyzing the formulaic nature of Disney movies, she showed audiences how Disney movies – including the recent blockbuster hit “Frozen” – have changed little over time,

While “Frozen” has been praised for the prominent roles of female leads who break out of the traditional Disney princess stereotype, Higginbotham questioned if the praise is deserved. She argued that while the lead character is female, the depiction of her powers and independence show that when a women’s power is left unchecked, it can be problematic.

Higginbotham noted that as a culture we do not challenge the “wonderful evil” that is Disney because the promises reinforce other cultural ideals about “who we are, what we believe and what we want to believe” as a society.

“This structure, a part of the Disney thematic apparatus, becomes the means by which social ideals are perpetuated, redistributed, even naturalized. Our characters face the same problems over and over,” Higginbotham said. “We are invested in the same social ideals as your great-grandparents were.”

“If polls are correct, most of you hate [Congress],” Craig Volden said, professor in the Frank Batten School of Leadership and Public Policy.

Volden, however, said that we shouldn’t mark all members of Congress as the problem. His research shows that on both sides of the political spectrum, there are varying levels of effectiveness.

Applying scores of effectiveness based on a variety of factors, including seniority, importance of the bills passed and whether one is a member of the majority party, Volden and his colleagues determined the most effective members of Congress.

He suggests that, based on the characteristics of the members, there is a way to build a better Congress, similar to the way that one would build a better business.

“What needs to be done if we want to build a better Congress? We want to identify those who would be effective lawmakers, help those already in Congress to succeed, and we want to perhaps remove from office those who are terribly ineffective,” Volden said.

As Volden’s research looks into the means of building a better Congress, he asked that the audience help with the process. “Try to avoid that one-dimensional thinking. Policymakers are not just Democrats and Republicans; they’re not just liberal and conservative. Some are much more effective than other,” he said. “You can act as an informed citizen, visit our website and spread the idea that effectiveness matters.”

What Is the ‘4th Side’? END_OF_DOCUMENT_TOKEN_TO_BE_REPLACED