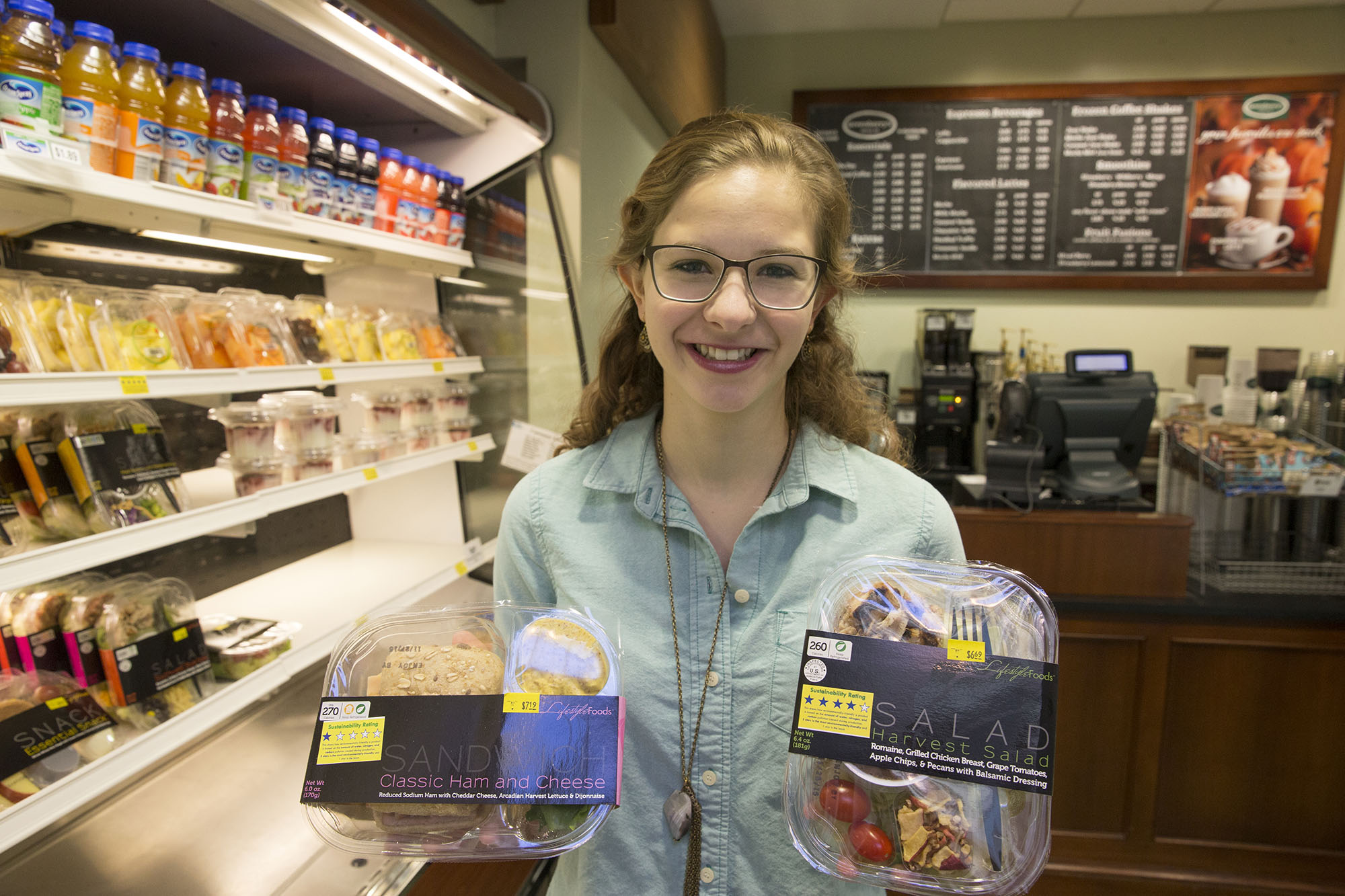 Lia Catteneo and fellow students labeled foods sold in Clark Café according to the carbon, nitrogen and water involved in the food’s production. (Photo by Dan Addison)

That Sushi Vegetable Combo comes out with an overall rating of four stars on sustainability.

UVA students have tried out a new way to encourage people to think about the impact of their eating habits – not on their waistlines, but on the Earth’s well-being.

Students in the Nitrogen Working Group, which is part of UVA’s Environmental Stewardship Subcommittee under the University Committee on Sustainability, came up with a pilot project to give a sustainability rating label to foods sold in the Clark Café – not based on the ingredients, but on the carbon, nitrogen and water involved in the food’s production.

Lia Cattaneo, a fourth-year student double-majoring in environmental sciences and civil and environmental engineering, said the group devised the project to inform buyers about the environmental impact of their food choices and encourage them to make sustainable decisions.

The group also plans to track purchases to see if the labels changed the number and kind of items bought during the two-week study, which began Nov. 9  and ends Tuesday, Cattaneo said.

Each food product was given a sustainability rating of between one and five stars, with a score of one being the least environmentally friendly. To calculate the footprint of a product, its weight was multiplied by impact factors – kilogram of emissions per kilogram of product – for carbon, nitrogen and water pollution caused and used.

“We recognized that food production and consumption are drivers of carbon pollution and water use, and we felt that the message would be stronger if we communicated all of these impacts,” she said.

“The products we labeled in Clark Café were from UVA Dining – sushi, wrapped pastries, yogurt, fruit – and [from] Lifestyle Foods,” Cattaneo said. “Lifestyle Foods provided us with weight data for their items. For the UVA items, I got to deconstruct sushi, parfaits and croissants and weigh the constituent items. It was really fun pulling apart the sushi into rice, seaweed, vegetables and other ingredients and weighing it on a mass balance.”

Nitrogen is most commonly introduced into the food production process as fertilizer. “The problems caused by nitrogen pollution are numerous,” UVA environmental sciences professor James N. Galloway said. “Most solutions focus on the providers of food and energy. This project focuses on teaching the individual the role that they play by their food consumption practices.”

Galloway, who co-chairs the Nitrogen Working Group with Cattaneo, began sounding the alarm about reactive nitrogen pollution about eight years ago. Similar to the idea of a product’s carbon footprint, which measures direct emissions of greenhouse gases that cause climate change, Galloway came up with the idea of the nitrogen footprint.

Although nitrogen in its inert form is harmless and abundant in the atmosphere, massive amounts of reactive nitrogen compounds, such as nitrous oxide, have entered the environment in recent decades, mostly through runoff from nitrogen-based fertilizers.

Galloway said the Nitrogen Working Group will continue the project, taking it to a larger scale next semester.

The group is working to meet the UVA Board of Visitors’ target of reducing the University’s 2010 nitrogen footprint by 25 percent by 2025.

At UVA, There Is a Club for Everyone END_OF_DOCUMENT_TOKEN_TO_BE_REPLACED