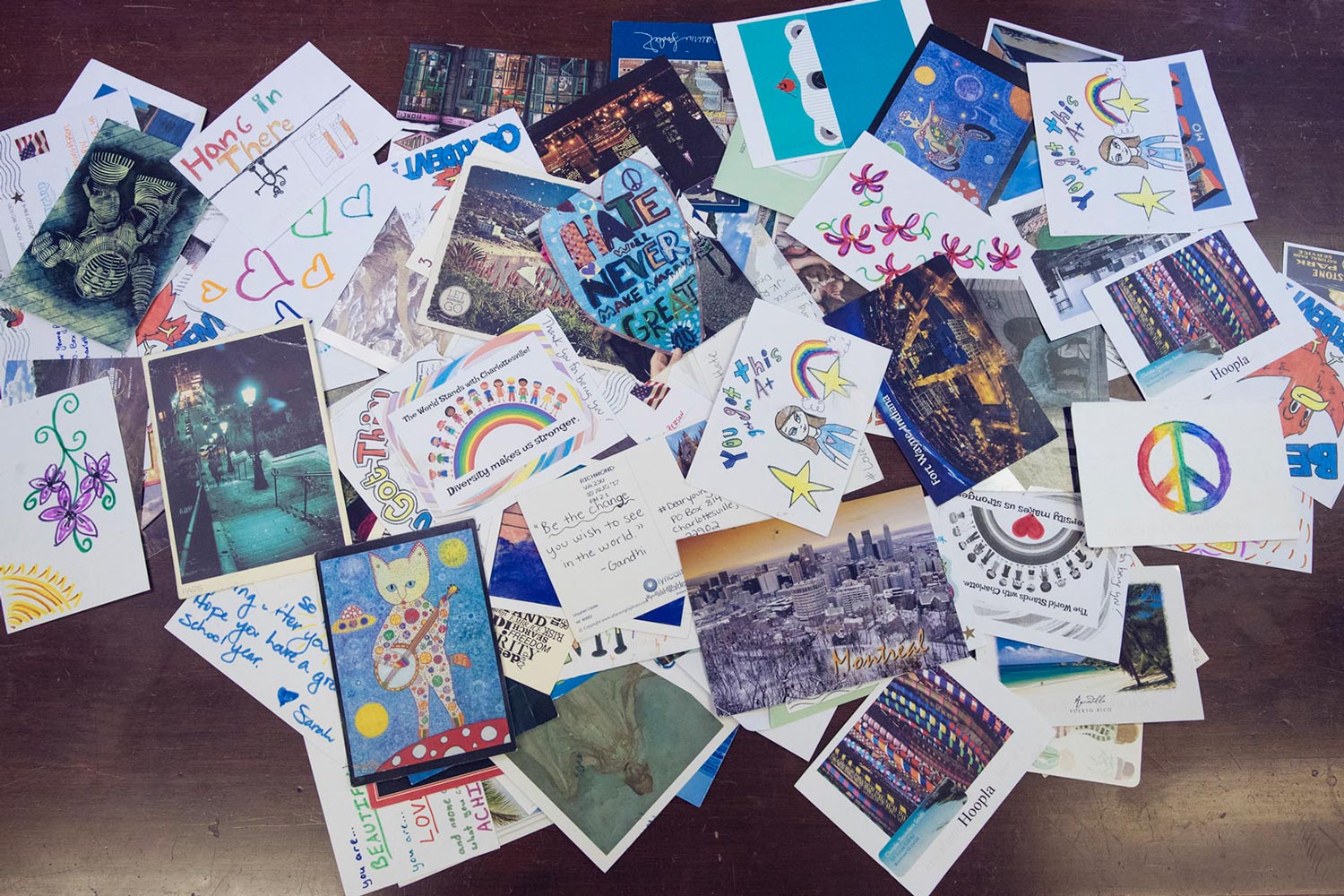 “The world stands with Charlottesville.”

“Be the change you wish to see in the world.”

These are messages written on postcards to reassure the youngest and most vulnerable among us in the area with a simple and powerful message: you are loved.

In the wake of the violent white supremacist and neo-Nazi torch procession and rally at the University of Virginia and in Charlottesville not quite two weeks ago, Madison House – UVA’s student volunteer clearinghouse – and Big Brothers Big Sisters of the Central Blue Ridge, joined by a group of local agencies, have launched a #DearYoungPerson campaign to send messages of hope and solidarity to area children.

To let the youth of Charlottesville know that love is stronger than hate, send them words of support and encouragement using #DearYoungPerson on social media or through picture postcards. Postcards can be mailed to P.O. Box 814, Charlottesville, VA 22902.

Tim Freilich, executive director of Madison House, worked with Athena Gould, executive director of Big Brothers Big Sisters, to find a way for Madison House volunteers to help make Athena’s vision a reality. “After the horrific events of Aug. 11 and 12 at the University and in downtown Charlottesville, Athena’s first thought was how to reassure area youth that they are loved,” said Freilich. “I’m happy that Madison House volunteers can help deliver that message.”

The groups, forming a coalition of about 10 Charlottesville youth-serving organizations, are leading outreach and working collaboratively to encourage people to support the city’s children by sending them postcards – and are already attracting attention from communities across the country and from individuals like Chelsea Clinton, who commended the effort to her 1.9 million Twitter followers.

Postcards – with words of encouragement, colorful drawings and pictures – are tangible mementos children can touch and keep, Freilich said. “We want to replace hate and fear with love and a sense of security, to let all kids know they are loved,” he said. 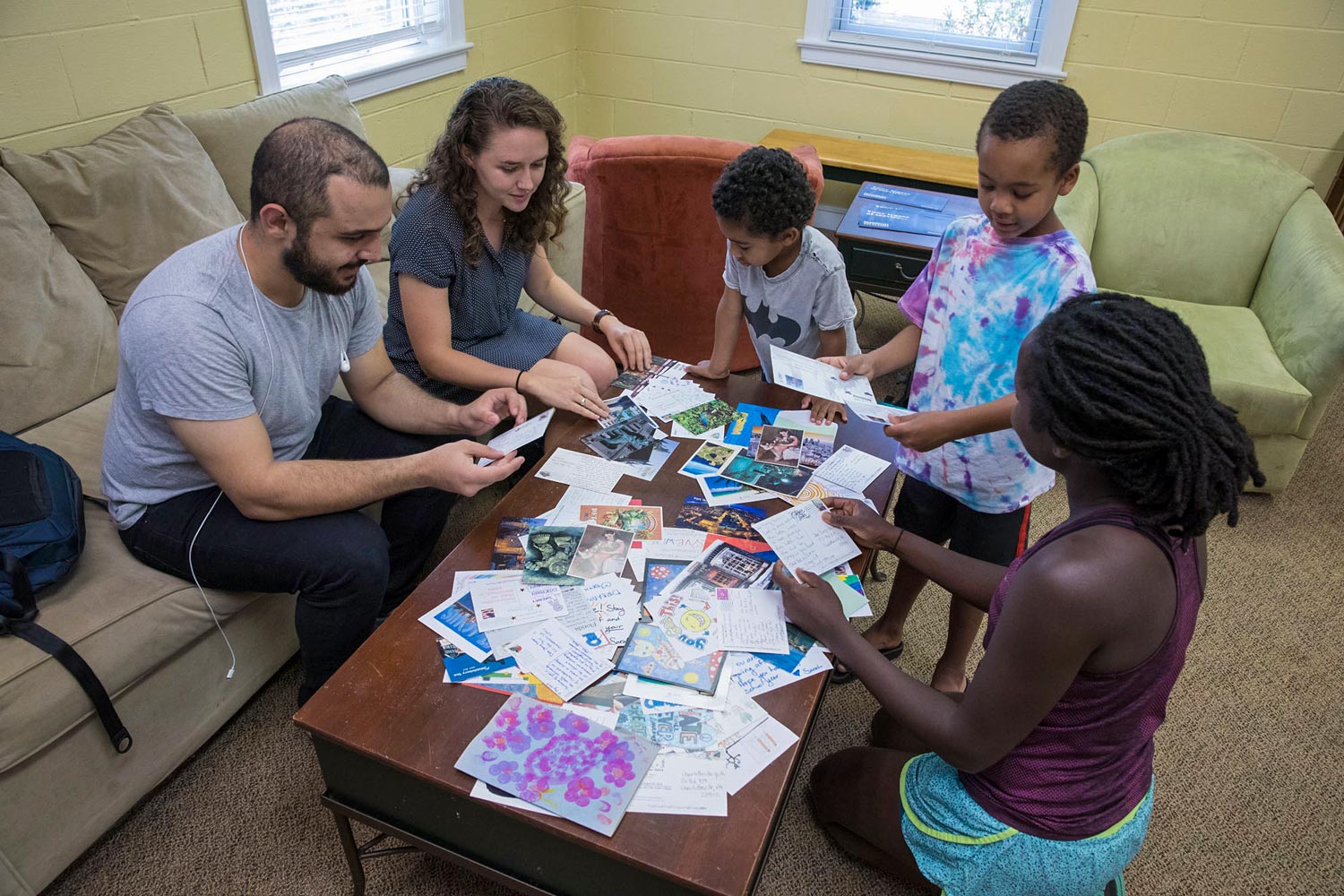 Although the campaign launched just days ago, postcards are already coming in. Madison House student volunteers are taking the lead on collecting, sorting and delivering postcards to young people in the area through non-profit programs.

“If we get inundated, that’ll be great,” Freilich said. If enough cards pour in, the distribution could be expanded from the local agencies to include local schools, too, he said.

Margaret Haltom, a fourth-year student from Memphis who co-chairs the Madison House Board of Directors, said she’s working on this campaign for two reasons: “First, to show Charlottesville youth that people around the world are supporting them through messages of love and tolerance; we’re standing behind them after a display of hate, showing that we believe in their ability to build a better world. The second is to recognize and support the Charlottesville-Albemarle non-profits that are putting this belief into practice.”

Other organizations supporting the campaign include the Boys & Girls Club of Central Virginia, City of Promise, Computers 4 Kids, the Foothills Child Advocacy Center, Habitat for Humanity of Greater Charlottesville, the PB&J Fund, Piedmont CASA, the Piedmont Family YMCA, the City of Charlottesville and the County of Albemarle.

“So many young people in this community saw violent and terrifying actions this past weekend,” said Athena Gould, executive director of Big Brothers Big Sisters of the Central Blue Ridge. “We’re so proud to work with and support these young people every day. Now more than ever, they need to know they are valuable and loved.

“As people look for concrete actions they can take to support our community right now, I hope they’ll take a moment to write a message of support to our kids with our #DearYoungPerson campaign.”

Dave Koehn, the radio “Voice of the Cavaliers” for UVA athletics who serves on the board of Big Brothers Big Sisters, said, “We are partnering with several local youth-serving organizations in Charlottesville – including Madison House – to create a #DearYoungPerson campaign in an effort show love and encouragement to the youth of Charlottesville and are asking for people around the country and globe to send postcards that we’ll get in the hands of our kids who could really use some support right now.”

Haltom, a Jefferson Scholar and political and social thought major who’s minoring in urban planning, said that the local nonprofits that are dedicated to supporting children and strengthening the community have been doing so long before recent events, and they’ll continue to do so long afterward.

“They, too, need support to continue their work, and it’s now more important than ever to support our city,” she said.

As a volunteer hub sending about 3,000 students each year into the community for weekly service, Madison House, established in 1969, is instrumental in building the University’s face-to-face relationships with some 175 non-profit partners, local schools, medical facilities, neighborhoods and with youth directly. Although Madison House has been a central part of the UVA student experience for nearly 50 years, it’s an independent nonprofit that relies on outside support to continue this crucial work.

A Year We Will Never Forget: 2019-20 in Review END_OF_DOCUMENT_TOKEN_TO_BE_REPLACED

‘What Will You Carry With You?’ Remarks From UVA President Jim Ryan END_OF_DOCUMENT_TOKEN_TO_BE_REPLACED