Making a Difference: UVA Community is Giving Back in Wake of Natural Disasters 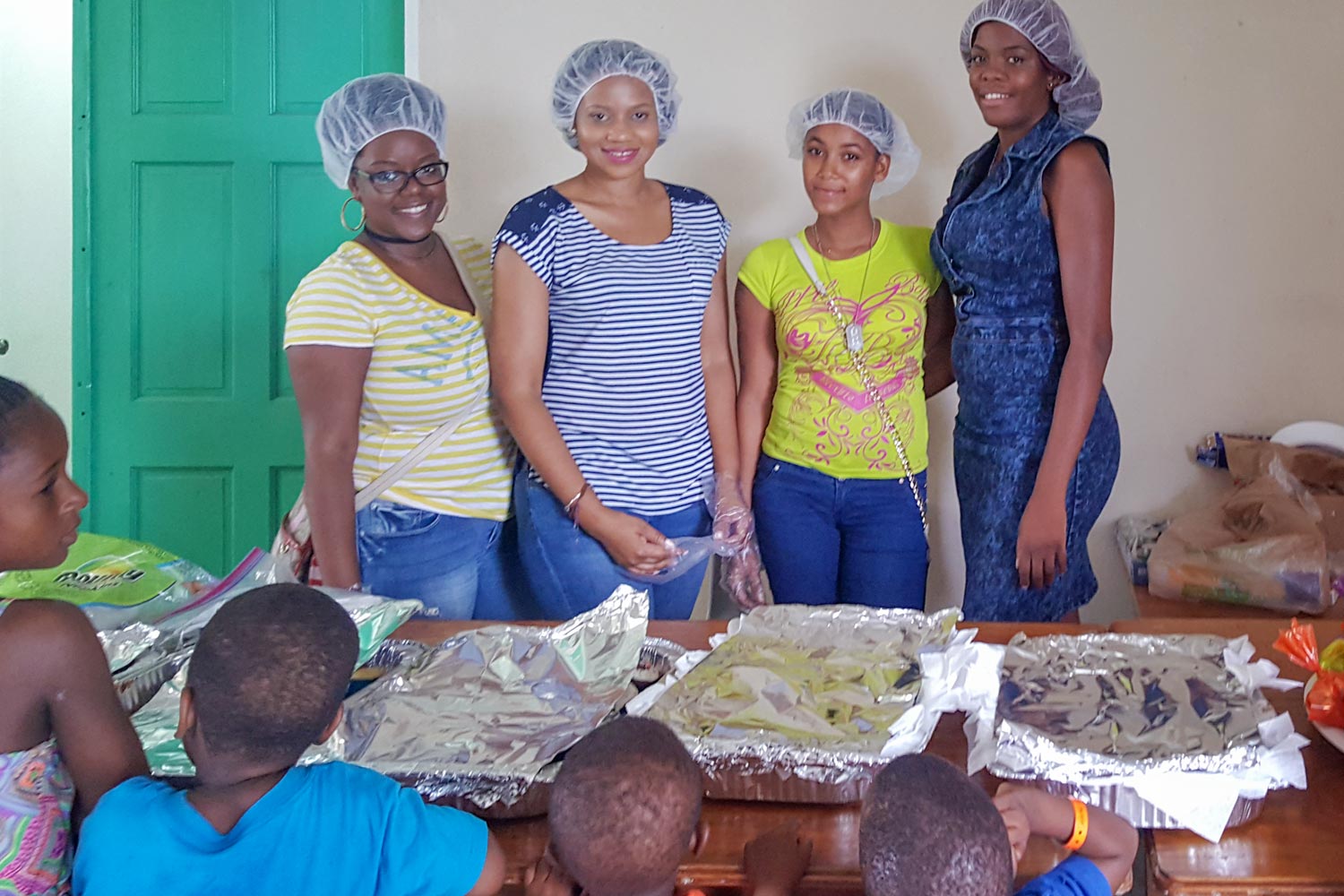 Elizabeth Alvarez said she would try not to get emotional. Talking about the devastation wrought by Hurricane Maria to her hometown in Puerto Rico has stirred profound sadness in her. It has also awakened in her a fierce determination to help.

Soon after the storm slammed into the island on Sept. 20, packing 160 mph winds, the island’s aging electrical infrastructure collapsed. Today, 80 percent of the U.S. territory remains without power.

Alvarez is a nurse in the University of Virginia Health System. Her hometown is Patillas, a mountain community on Puerto Rico’s southern coast. In all the media coverage of the storm, she said she has not heard a single word about her home.

“Nobody has mentioned my town at all and it was very close to the straight line of the hurricane, and so finally, seven days after, we heard from our town,” she said at a fast clip. “Nobody has been there. They haven’t seen any aid from FEMA or the Red Cross and they finally saw aid a couple of days ago from the private sector, and it’s devastating.

“We are all Americans and they need our help and I feel like they are not getting the help that they need.”

So Alvarez decided she would do the helping. She set up a GoFundMe page and started taking donations. She will take what she collects to Patillas at the of the month and said volunteers can contact her via her GoFundMe page. Alvarez received an unexpected boost last week. Nationally syndicated morning radio host Elvis Duran asked listeners to call in to share stories about things to which they are giving 100 percent, and Alvarez quickly dialed the number. Soon she was on live radio sharing her story with Duran and his audience of more than 5.5 million people, her voice choking with emotion.

Duran donated $5,000 on the spot and the donations have only grown since then. On Wednesday, Alvarez was just a couple thousand dollars from her goal of raising $10,000.

Her determination is but one of many examples of the UVA community giving back in the wake of the United States’ most active hurricane season in 12 years. Four major hurricanes have battered the Western Hemisphere in the last six weeks alone.

For Elizabeth Moody Conn, a 2004 graduate of UVA’s Darden School of Business, giving back has been a hugely impactful, behind-the-scenes effort.

As the “Merchant of Plywood” for The Home Depot, the largest home improvement retailer in the United States, Conn buys plywood and structural panels for all of the company’s U.S. stores, including those in Guam, Alaska, Hawaii, Puerto Rico and the Virgin Islands.

In times of emergency, the Atlanta-based retailer activates a disaster command center to be sure those who are impacted have what they need to rebuild. When hurricanes hit, plywood is high on the list of needed supplies.

“The demand was staggering,” Conn said.

The Home Depot opened a command center for Hurricane Maria, too, from Sept. 27 to Oct. 6. “For Puerto Rico, product categories are the ones you’d expect, like generators, batteries, gas cans, lumber, etc.,” she said. “There were a couple of key differences,” she added. “How we get products back into stores is vastly different, using barges, for example, instead of deploying trucks. And the amount of store damage was much more significant. We had to make sure associates were safe, goal one, and that customers could safely shop in our stores.”

Conn said that was much more difficult to achieve because communications were so limited. “You can’t just send in products without ensuring you have those basics taken care of.”

Her work is not done. A command center is opening to react to the wildfires in California.

Conn said working in the command center is both humbling and invigorating. “At Home Depot, we talk about ‘bleeding orange,’ which is convenient, being from Virginia.

“I was doing my job, but I feel like it’s more than your job and it takes an extra level of commitment to go above and beyond doing your job to make sure you are taking care of folks,” she said.

Second-year Echols Scholar Andrew Walsh was raised on the Caribbean island of Dominica, which also was devastated by Hurricane Maria. His family lost their home.

“My parents have been living there for over 20 years and my dad built our house, which took him a couple of years, and it’s pretty much all gone now, scattered over the hillside,” Walsh said. “Pretty much all of my childhood memories were in the house, and all my belongings I don’t have at college are in there, and my parents’ whole livelihood was there, so it’s pretty rough now that it’s all gone,” he said.

Walsh’s mother, Wendy, established a GoFundMe page to help their recovery efforts. Andrew’s parents are living with his grandfather in Virginia while they figure out what to do next. Andrew and his father hope to return to the island around the holidays to help clear debris and install a water system to get clean water to the community. The family has raised more than $25,000 so far.

Christina Ross, a third-year Ph.D. student in the School of Nursing, was raised on the island of Antigua. Its neighbor island, Barbuda, was completely destroyed by Hurricane Irma. Because of that, all 1,800 residents were ordered to evacuate to Antigua.

Ross said that when she learned a friend had lost her 2-year-old son during the hurricane, she knew she had to do something. She started collecting supplies to deliver to her hometown in person.

“I was planning on taking a suitcase or two filled with items,” she said. “I ended up taking down eight large suitcases and have more items that need to be shipped. The ‘Baby Lab’ in the psychology department donated about 500 diapers and students donated cash that was used to offset costs.”

The UVA community has also raised funds for Mexico, where a 7.1-magnitude earthquake killed 369 people in September.

A group of Mexican students in the Darden School of Business raised more than $3,000.

“The earthquake was devastating, leaving many families without a home, so we wanted to do something to help our people,” said Sofia Luna Grandos, who helped lead the effort. “Being so far away from home, the best way to help was by donating money to the institutions that are helping the victims, so we decided to launch the fundraiser and raise as much funds as we could.”

Jessie McGann of Fluvanna, who works for UVA’s Procurement Services, set up a 14-foot trailer on Grounds at Facilities Management in early September to accept donations for hurricane victims in Houston. She had contacted the Greene County Sheriff’s Department, which was taking a truckload of relief supplies to Texas.

“As stuff came in, I boxed it up, so there would be a box of women’s clothes and children’s stuff and the like, and I labeled it ‘From UVA’,” McGann said. While McGann was originally collecting for the hurricane survivors in Texas, she said some material was collected and sent to the devastated areas of Florida as well.

Clayton “Bo” Roberts, a plumber/steamfitter with Facilities Management, spent four days providing assistance to hurricane survivors in Beaumont, Texas, with a group from the Calvary Chapel of Fluvanna. The trip was organized by the church’s youth pastor, who coordinated with the youth pastor of the First Baptist Church in Beaumont.

“We tore out sheet rock and wet, moldy insulation and moved furniture out to the curb,” he said.

Roberts’ group consisted of five adults and seven teenagers from the church. He said the group drove from Virginia to Texas – two days down, two days back – and spent four days on the ground helping people, sleeping at the church.

“They gave us contact information and sent us out,” he said. “They supplied us with tools but we didn’t need much – a wrecking bar, a wheelbarrow, a shovel and a broom.”

Roberts said it felt good to be there and be able to help people, but he was saddened by the devastation.

“We would go into a subdivision and the houses would be set back from the street by a hundred feet and all the personal belongings from the house would be piled up in the ditch, waiting to be hauled away,” he said.

He said the residents of Beaumont gave them a warm reception.

“They were overjoyed,” he said. “There was one 75-year-old woman who thought she could gut her house on her own. We helped her.”

Harris said his group may return in late November or early December to work on rebuilding homes, instead of stripping things out of them.

“I want to go back and be a plumber,” Roberts said. “I want to set fixtures and install pipes.”