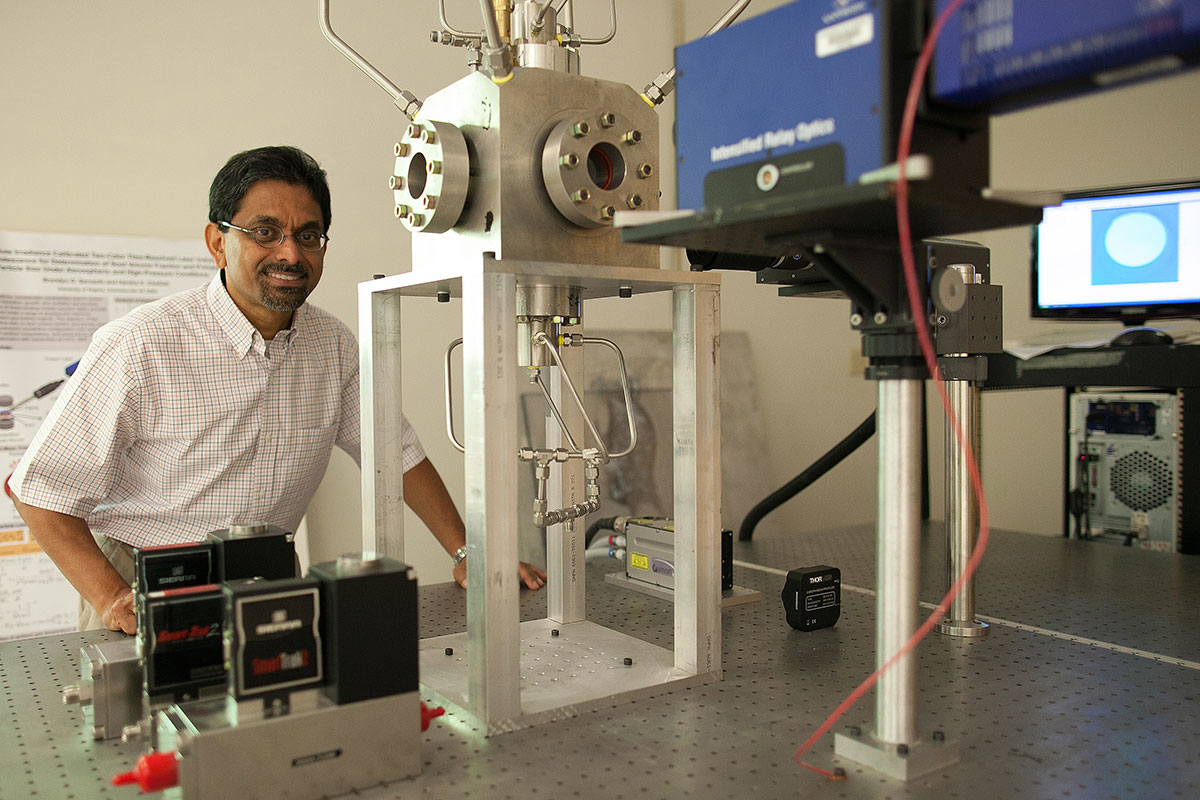 If you think lighting a match on a windy day is hard, consider trying to light the flame in the combustion chamber of a hypersonic jet engine and keeping it lit. At the speeds hypersonic jets attain, the air moving through their engines is traveling many times faster than a Category 5 hurricane.

This year, the Air Force Office of Scientific Research joined forces with the National Science Foundation in awarding a $1.5 million grant to Harsha Chelliah, a University of Virginia mechanical and aerospace engineering professor, to expand the validity of turbulence models that researchers use to predict high-speed reacting flows of air and fuel in hypersonic engines. The grant is the latest in a series of awards that has placed UVA’s School of Engineering and Applied Science at the forefront of an international effort to make hypersonic flight a reality.

“The ultimate goal is to find ways to stabilize combustion over a shorter distance,” Chelliah said. “By reducing the overall length of the combustor, we will be able to decrease overall engine weight and increase the payload.”

A Record of Excellence in Hypersonic Propulsion

UVA Engineering has been recognized for pioneering research in this field. Six years ago, Professor James McDaniel secured a $9 million grant from NASA and the Air Force Office of Scientific Research to establish the National Center for Hypersonic Combined Cycle Propulsion – one of only three groups to be funded from among the 26 university and industry teams submitting preliminary proposals. In addition to Daniels, the winning team included Chelliah, Associate Professor Christopher Goyne and researchers from 10 other universities, national labs and corporations.

Since that time, the Air Force has called on McDaniel and his colleagues to consider ways to reduce the size and weight of the scramjet engine, which powers hypersonic flight. In addition to this latest grant, it awarded Chelliah a $2.2 million grant in 2012 to explore a viable catalytic cooling system that uses a scramjet’s own fuel as a coolant. A traditional liquid coolant system capable of controlling temperatures of this magnitude would be prohibitively heavy.

The challenge for Chelliah and his team, which includes Goyne and senior scientist Robert Rockwell, is that airflow inside the UVA scramjet engine test facility is moving extremely fast, from between Mach 0.6 to Mach 1.5. At these velocities, it takes just 400 microseconds to burn the fuel/air mixture. Understanding the fundamental modes of turbulence-flame interactions under these conditions is critical.

The researchers at UVA, along with partners at NASA Langley and George Washington University, will focus on the experimental side of the project, trying to raise the limits of spatial resolution to 50 microns using non-intrusive laser-based diagnostic techniques. Researchers at North Carolina State University and Sandia National Laboratory will handle the computational and modeling side, attempting to create more detailed and extensive models than were previously possible.

“We are trying to get down to the most basic scale of turbulent energy dissipation and feedback,” Chelliah said. “That way we will minimize uncertainties involved in making predictions about how to control it.”

One advantage that Chelliah and his colleagues have is access to UVA’s Aerospace Research Laboratory, one of the few laboratories in the nation capable of reproducing the velocities found inside scramjet engines. They are also able to use NASA Langley’s 3-D printing facility, which will enable Chelliah’s team to test superalloy combustor geometries with different shapes.

“I am very excited about this opportunity,” Chelliah said. “It will help us reach our conclusions that much faster because we will be able to move back and forth between the computational and the experimental findings.”

Netflix to Add Ads. Why This Could Be a ‘Game-Changer’ for Your Viewing Experience END_OF_DOCUMENT_TOKEN_TO_BE_REPLACED

What’s Next for UVA’s Class of 2022? END_OF_DOCUMENT_TOKEN_TO_BE_REPLACED