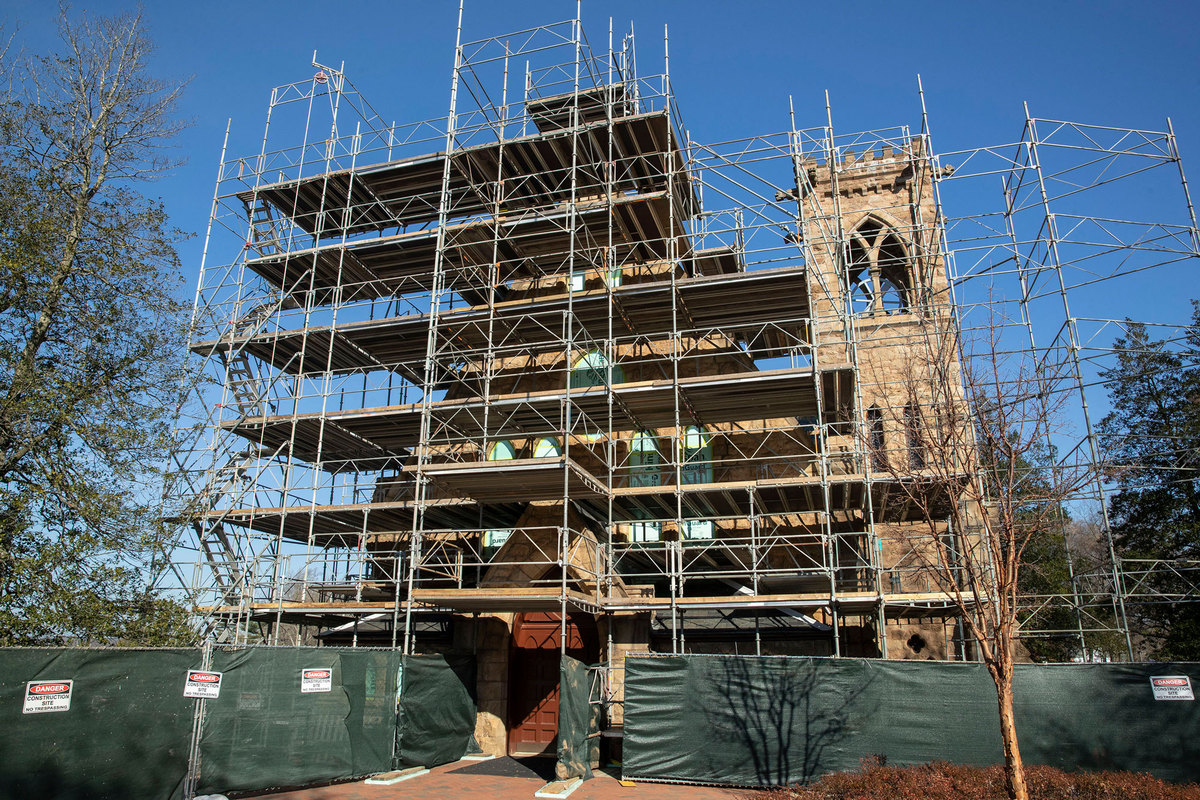 The University’s historic chapel has been wrapped in scaffolding as masons repoint the mortar. (Photos by Dan Addison, University Communications)

The University of Virginia Chapel was swathed in scaffolding for the new year.

Facilities Management’s historic masons, specializing in historic preservation, have been working on repointing the chapel, replacing or restoring the mortar between the sandstone blocks in a combination of repair and regular maintenance.

“Some of the mortars need to be repaired because there is deterioration taking place,” said Wayne Mays, assistant director of trades for Facilities Management. “We have seen some water damage inside the chapel and we are repairing some of the causes of that. There was some flashing that was in disrepair and we have to repair or stabilize the stone and some of the mortar to keep water from infiltrating the chapel.”

The masons are replacing some of the more modern mortar between the sandstone blocks.

“All the original mortar is a lime mortar, just like in the [Thomas] Jefferson[-designed] buildings,” Mays said. “There were some repairs over the years where cement mortar was installed. Our masons have removed those cement mortars. 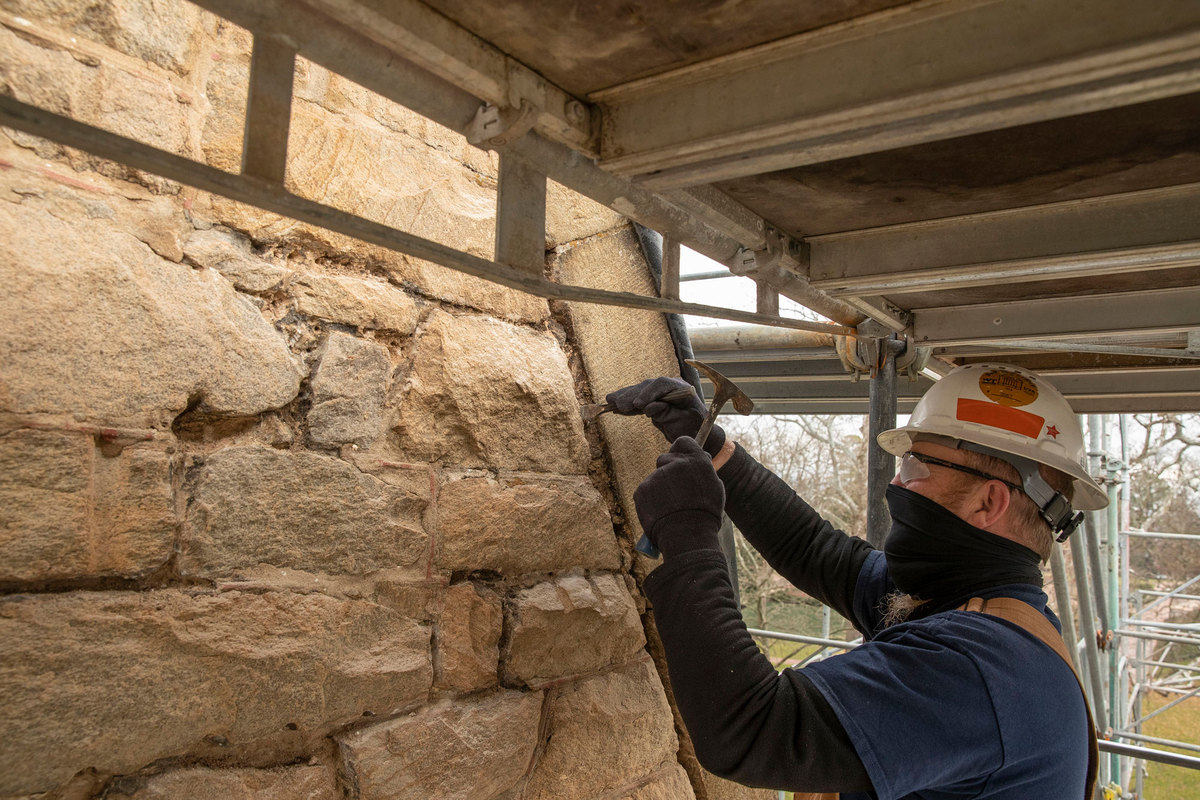 Dennis Edwards, supervisor of historic masonry, carefully chisels out some of the cement mortar between the sandstone blocks.

“Cement mortars could cause further harm in a couple of different ways. Cements are non-permeable, meaning moisture can pass through. Cement acts as a dam and prevents moisture from passing through. Moisture can get trapped behind the cement mortars and actually deteriorate the softer lime mortar behind it. Lime mortars are permeable. They breathe the way you and I do and that is how the building works for a masonry structure.”

Aside from damaging the lime mortar, the cement mortar traps water that can freeze, pushing the mortar and the stones farther apart. Moisture entrapment and the existence of cement materials can also create soluble salts.

“Some people recognize soluble salts as white snow on the surface,” Mays said. “Soluble salts can grow into salt crystals that grow within the wall, like stalactites, and start pushing the masonry apart.”

The mortar joints between the sandstones also carry a center bead that raises up from the mortar about a quarter-inch and that bead carries a line of red color.

“Think of it as pointing it twice,” Mays said. “Point it with your standard mortar color, and then over the top of that, in the center of the joint, you are pointing it again.”

Dennis Edwards, supervisor of historic masonry, has been researching the history of the chapel’s masonry, the first repointing of which was performed about 10 years after the chapel was built.

“We are not sure what issues they were having, but they did come up with $50 for a repointing campaign, around 1904 and 1905,” Edwards said.

While working on the chapel, the masons noted some other work that needed to be done in the bell tower and on the slate roof, which had last been replaced in 1991.

“The slate roof is in pretty good shape,” Mays said, “The main issue that we found was how the flashing ties into the stone. Some of the flashing has been repaired, but the slate itself is in good shape.”

They also found the wooden bell-rope wheel was broken and the bell needed attending.

“Once we got the scaffolding set, we noticed there is a wooden wheel [in the bell tower] that the rope used to be wrapped around to ring the bell,” Edwards said. “There was a broken piece to that and a maintenance crew from the Central Grounds maintenance crew ended up fixing that while we had the scaffolding set. Once they were done, we went in and waxed the bell to preserve it and protect it from the elements.” 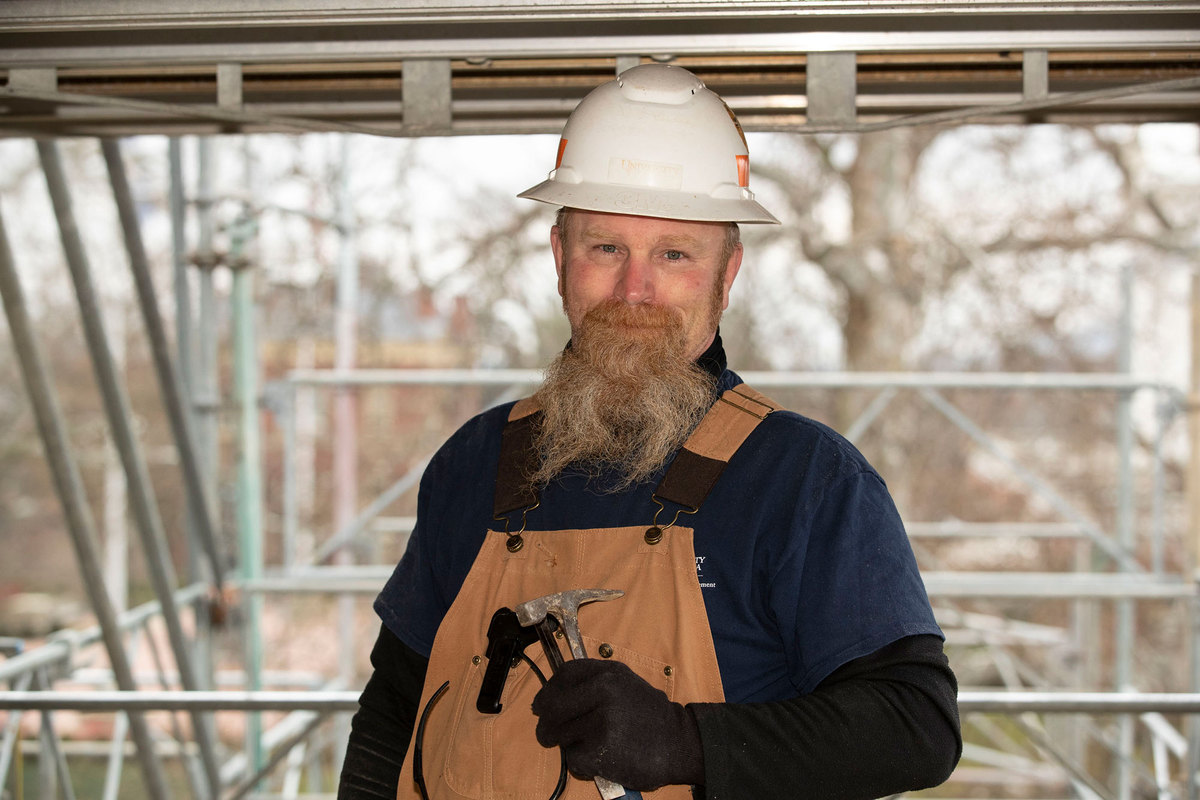 Edwards has researched the history of previous chapel repointings.

The bell was cast by the McShane Foundry of Baltimore, and it was presented to the University by the V.V.V. Dramatic Club on Sept. 13, 1897. Though the wooden rope wheel was repaired, the bell does not ring any more, having been replaced by an electronic carillon.

The chapel was the first building constructed on Grounds exclusively for religious worship and is a clear departure in many ways from Thomas Jefferson’s original vision of the University.

According to the “2006 University of Virginia Historic Preservation Framework Plan,” published by the Office of the Architect: “The use of natural stone in its construction is in direct contrast to the red brick and white trim found on the academic buildings. Its placement northwest of the Rotunda, outside of the Lawn, further distinguishes it from other University buildings.

“In the 19th century, architectural styles carried meaning that we don’t always appreciate today,” said Brian Hogg, senior historic preservation planner in the Office of the Architect for the University. “Gothic was closely associated with Christian places of worship, and was almost always of stone, or something that looked like stone, such as stucco. The fight to have a chapel began before there were even students, so making something so emphatically not Jeffersonian makes sense. The building is, however, placed on Jefferson’s grid for the Lawn, with its door aligned with that of Hotel A. If you think of the chapel and Brooks Hall flanking the Rotunda annex, you realize that they created a very thoughtful composition on the north side of the University.” 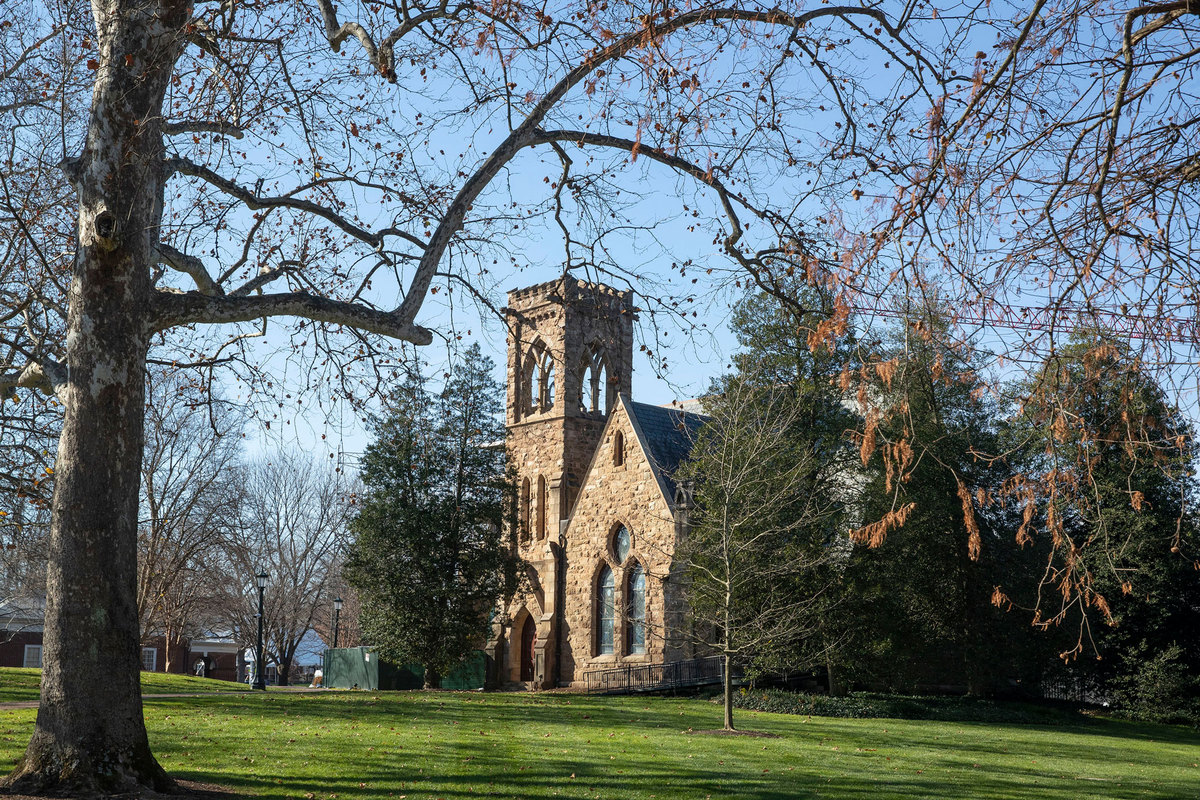 The University Chapel balances out Brooks Hall in the symmetry of the north side of Rotunda.

Maximilian Schele De Vere, a professor of modern languages at the University, spoke at the laying of the chapel cornerstone on March 30, 1885, and said that Jefferson was not antagonistic to religion.

“The great founder himself, who had so brilliantly fought for the severance of Church and State, and who looked upon his Act Establishing Religious Freedom as a triumph well worthy of being engraven [sic] on his tombstone, could not but dread the idea of his beloved University being involved in sectarian strife or propaganda,” De Vere said in his address. “This was the reason why he omitted religious teaching from the general plan of instruction – and not, as has often been recklessly and even maliciously asserted, a feeling of hostility to religion. Far from it.”

De Vere said that Jefferson attended church in a courthouse that was used for services.

“There he sat, and devoutly, with unflagging attention, joined friend and neighbor in the worship of God,” De Vere said.

The professor maintained that while Jefferson was the victim of envy and malice, the need for a spiritual outlet on Grounds grew.

“The heart of the people began to yearn and long for spiritual solace, until at last the needs of the little community became too pressing to endure any longer this stern denial of religious privileges,” De Vere said in his address. “Soon the voice of prayer was daily heard in our halls; soon the Sabbath bell summoned old and young to worship in common, while our young men, full of fervent zeal, went out over hill and dale, to carry to the poor, neglected and forsaken mountaineers the glad tidings of the Gospel.”

Construction of the chapel, designed by Baltimore architect Charles Emmett Cassell, began in October 1884, underwritten by private donations. The exterior was mostly complete by November 1895. The carpet and pews were installed by 1890, with a June 8 dedication that year. Slight alterations were made in 1981 to accommodate an organ.

The building suffered a small basement fire in 1910 which damaged a portion of the floor and some of the pews, but the building remains today much as it did 130 years ago.

At UVA, There Is a Club for Everyone END_OF_DOCUMENT_TOKEN_TO_BE_REPLACED