Maurice Apprey Leaves Legacy of Student Success as He Retires 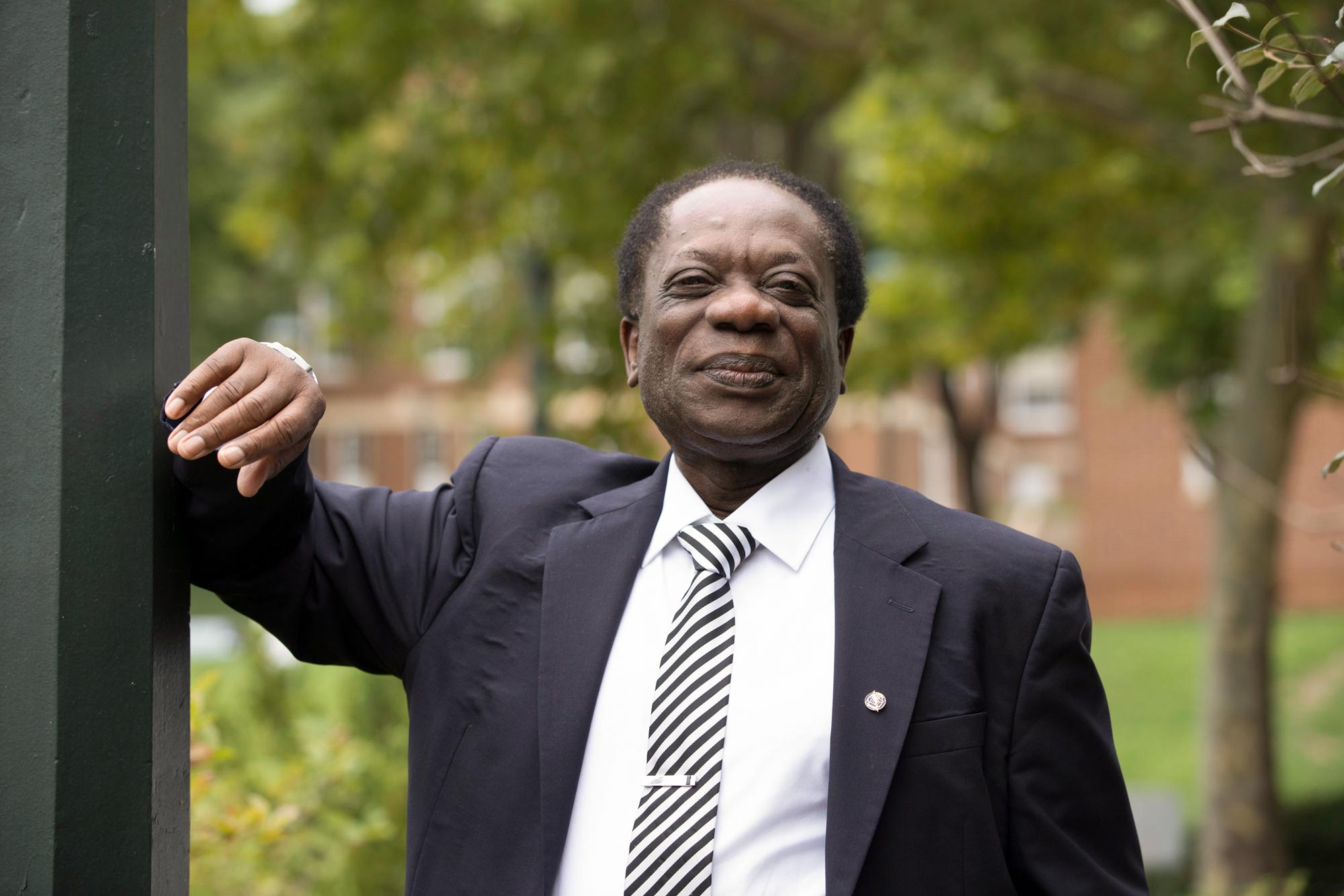 Maurice Apprey joined the University of Virginia School of Medicine faculty in 1980 as a newly minted child and adolescent psychoanalyst who had studied with Anna Freud (yes, the daughter of Sigmund).

“Back in 1982, Dr. Lawrence Burwell, a cardiologist, was the only African American member of the faculty,” Apprey said, “and only a handful of African American students were in the entire School of Medicine.”

A year later, Apprey visited then-UVA Provost Ed Floyd, telling him, “We have got to change this image.” Not long after that, Apprey was named assistant dean of student affairs in the School of Medicine. He created a medical recruitment and retention program to attract and serve minority students.

As a result, minority representation in entering medical school classes rose by 17 percent. And for 13 years under his watch, the Medical School’s retention rate for minority and disadvantaged students was 100 percent.

Forty-plus years later, Apprey will officially retire from the University on June 30, having made a huge impact in changing the University’s image, not only in the Medical School, but also on Grounds as dean of African American Affairs, a post he’s held since 2006.

Time flew by so fast, Apprey said. He hardly noticed that he had been at the University for four decades. Looking back and asking himself, “What makes a person stay in one place for this long?” he said the answer goes back to that first conversation with the provost and wanting to improve the experience and success of underrepresented students.

“As sure as the sun rises each day, I would not be where I am today without the mentorship, initiative and leadership of Dean Apprey.” – Dr. Michael Nelson

In a recent letter of gratitude to Robyn Hadley, vice president and chief student affairs officer, he credited those with whom he had worked: “I wish to extend my special thanks to colleagues, mentors, staff, students and all others who joined me in the yeoman’s task of advancing the University’s efforts in minority education from the inchoate experience it once was.”

Countless students have benefited from Apprey’s support and guidance over the years. He has taught undergraduate and medical students, residents in psychiatry and psychology, and hospital chaplains, plus students in Istanbul, Turkey, where he helped establish a psychoanalysis training institute. Apprey retired from teaching as professor of psychiatry last year.

Dr. Michael Nelson, a professor of medicine at the University of Virginia, sings the praises of his former teacher: “As sure as the sun rises each day, I would not be where I am today without the mentorship, initiative and leadership of Dean Apprey.”

Nelson, the first African American M.D./Ph.D. graduate from the School of Medicine, now serves as chief of the Division of Asthma, Allergy and Immunology at UVA Health and the School of Medicine. As a former UVA student who completed the Medical Academic Advancement Program developed by Apprey, Nelson said, “His personalized attention to all he meets is a legacy that has helped so many.” Nelson’s son, Max, who is graduating this spring from UVA, also has benefited from Apprey’s mentorship.

Sydney Williams, who graduated in 2020 with a B.S. in biology and a minor in philosophy, started a mentoring partnership with Apprey her first year on Grounds. She sought guidance on the best preparation for medical school, her next goal. They met once or twice a semester, discussing everything from selecting courses to getting exposure to medical fields. She will attend Columbia University’s Vagelos College of Physicians and Surgeons this fall.

Apprey’s “level of support validated my passion for medicine and enabled me to truly envision myself succeeding,” said Williams, who has been working at Project Horseshoe Farm, a community health non-profit organization, in Greensboro, Alabama.

Some aspects that have helped him in administration and teaching include becoming interdisciplinary and assuming the best of human nature, Apprey said. He advises others “to study broadly and deeply.”

When encountering obstacles, he added, creativity in finding alternative ways to work toward goals can be helpful.

Apprey, who hails from Ghana, received his B.S. in psychology, philosophy, and religion in 1974 from the College of Emporia in Kansas. He then became one of a handful of students who studied child psychoanalysis with Anna Freud at the Hampstead Clinic in London, now known as the Anna Freud Centre. He then received his adult training in psychoanalysis at the New York Freudian Society.

Apprey later went on to earn two doctoral degrees: a Ph.D. in human science research from the Saybrook Institute in San Francisco, and later, a doctorate in management (now renamed Doctor of Business Administration) from the Weatherhead School of Management at Case Western Reserve University. This gave him the opportunity to focus on studying leadership, conflict management and non-profit management research.

With this wide range of academic training, he regularly prepared data about students and their academic successes to show the efficacy of the office’s programs and how they aligned with the University’s strategic goals. He explained, for example, the importance of having the Office of African American Affairs and a student multicultural center on Grounds as follows: the former fosters “bonding” whereas the latter offers “bridging” – and both support students in complementary ways.

When Patricia M. Lampkin, then associate vice president for student affairs, first asked Apprey to head the office on an interim basis in 2006, she had turned to him for some delicate student mediations. She knew he had worked on the 1987 UVA group that produced “An Audacious Faith: Report on the Task Force on Afro-American Affairs.”

Under Apprey’s leadership as dean and as associate vice president for student affairs, the Office of African American Affairs has created successful programs that advance the accomplishments of Black students and better prepare them for professional careers, Hadley and others said.

Hadley summarized his impact, writing, “Maurice has led a team whose support of Black students has concentrated on academic achievement, leadership education, and the mastery of skills and competencies to negotiate personal, professional and ethnic identity.”

From the time he took the position, Apprey determined that a primary strategic focus would be to align the high graduation rates of undergraduate Black students that UVA had become known for with correspondingly high grade-point averages.

Three key programs implemented the strategic focus of the office: the Peer Advisor Program, the GradStar Program and leadership programs of the Luther P. Jackson Black Cultural Center, along with robust academic advising, mentoring and other advice on research and resources given by all the deans of the office.

“As a result, these students have gone on to succeed in graduate and professional study and in competitive workplaces,” Hadley said.

“The same university that legally shut out Black students [in the last century] has become one of the best places for Black students to study,” Apprey mused.

“There are books crying to be read and to be written.”

With his training in psychoanalysis, Apprey extended his professional work from helping the troubled individual to healing groups – even up to the level of nations, in his additional career work as an international mediator.

He was a member of the former UVA Center for the Study of Mind and Human Interaction, which managed and mediated the transition, from 1994 to 1999, of restoring the independence of Estonia after the breakup of the Soviet Union.

Apprey has published extensively in three areas: conflict resolution and social change management, including the book, “Framing Social Change Management in Three Movements”; modern French reception of German philosophy in phenomenology; and child, adolescent and adult psychoanalysis, such as the volume he co-edited, “Intersubjectivity, Projective Identification and Otherness” and his English translation of Georges Politzer’s 1928 treatise, “Critique of the Foundations of Psychology: The Psychology of Psychoanalysis.”

Closer to home, he co-edited “The Key to the Door,” published by UVA Press in 2017, which chronicles the experiences of UVA’s earliest African American graduates and also includes an overview of the history of Black workers on Grounds.

He plans to continue pursuing his scholarship in psychoanalysis, more recent continental philosophy, and management.

“There are books crying to be read and to be written,” Apprey said, waving at his packed bookshelves behind him.

Besides books, he wants to spend more time with family, especially his grandchildren.

Do You Know the History of Your Favorite Corner Spots? END_OF_DOCUMENT_TOKEN_TO_BE_REPLACED

Netflix to Add Ads. Why This Could Be a ‘Game-Changer’ for Your Viewing Experience END_OF_DOCUMENT_TOKEN_TO_BE_REPLACED

What’s Next for UVA’s Class of 2022? END_OF_DOCUMENT_TOKEN_TO_BE_REPLACED