Maurice Wallace Broadens Study of Black Identity in the Arts, on the Streets 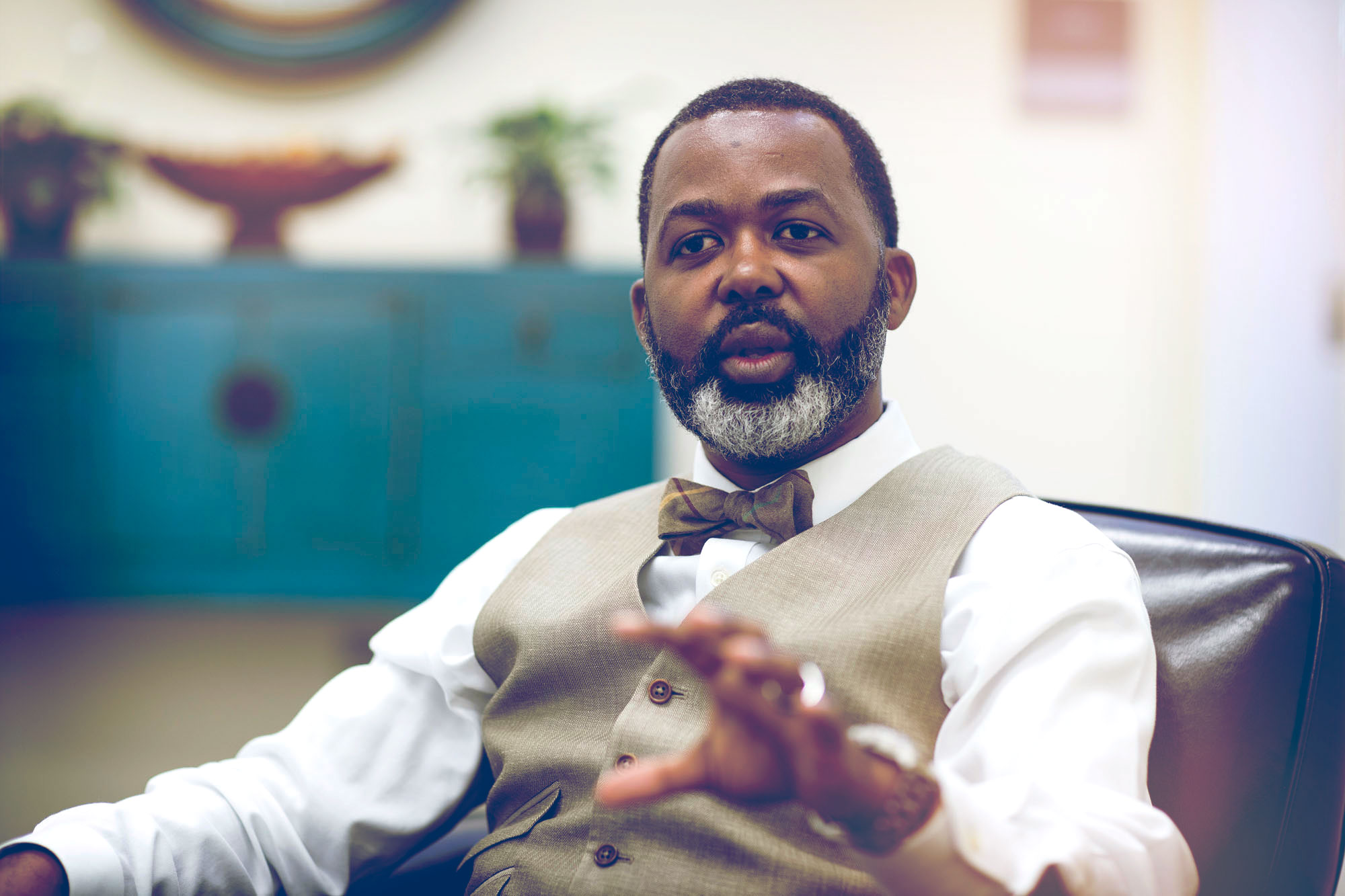 Associate Professor of English Maurice Wallace wasted no time in jumping into the University of Virginia’s interdisciplinary humanities community in 2015. Freshly hired as a member of the English department faculty and the Carter G. Woodson Institute for African-American and African Studies, within a year he was named the institute’s associate director.

Having a range of academic interests, he said he has found a ready-made community here. “It’s easy to be interdisciplinary at UVA,” he said.

UVA appealed to him for its “storied English department” with its strengths across periods and genres. “I’ve always had great admiration for the department,” he said.

Previously on the faculty at Duke University, he had no problem coming here after his wife, Pamela Sutton-Wallace, was named chief executive officer of the UVA Health System, he said.

The history and legacy of the Woodson Institute also attracted him, and he’s happy to support its activities, faculty, fellows and undergraduate students in his associate director role. It’s an important time for the institute, when it’s realizing long-term aspirations and casting for a new vision, he said.

“Maurice’s contributions to the Woodson Institute are manifold,” English Professor Deborah McDowell, who directs the institute, wrote in an e-mail. “Not only does he bring a distinguished record of scholarly achievement, he brings his talents as a master teacher. Whether he’s teaching the writings of James Baldwin, the films of Spike Lee or ‘Slavery and the Literary Imagination,’ he provides our students a challenging – and stimulating – classroom experience. 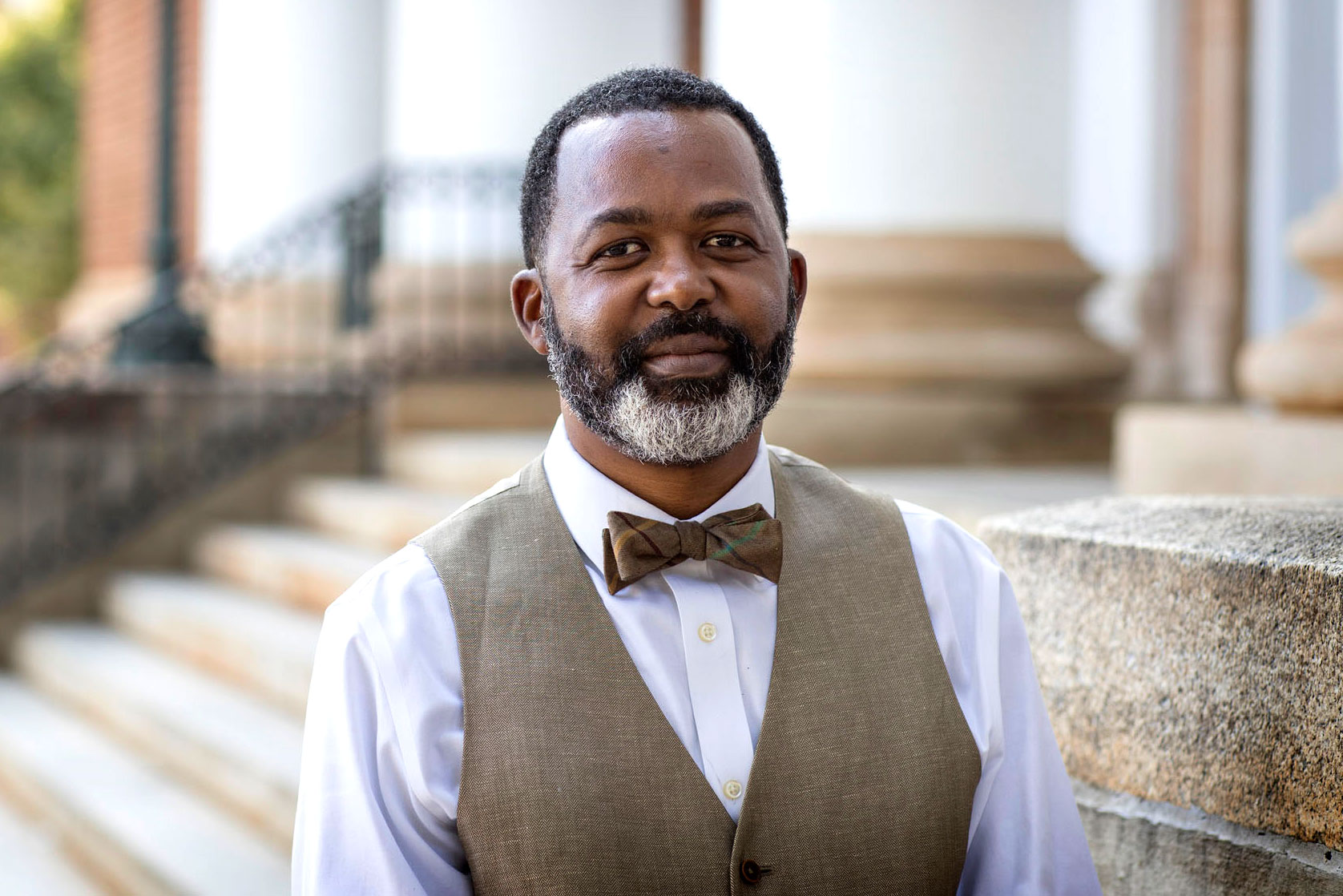 “He has also become, for many of them, a trusted mentor and a confidante, whose guidance extends well beyond the classroom.”

A scholar of 19th and 20th-century African-American literature and cultural studies, Wallace’s scholarship focuses on the intersection of the visual arts with identity and political movements. He co-edited with Shawn Michelle Smith “Pictures and Progress: Early Photography and the Making of African American Identity,” which was published in 2012. Frederick Douglass, the best-known 19th-century ex-slave dedicated to abolition, was very aware of how his photographic portrayal would represent his race, for instance.

Wallace has already shared his expertise in several conferences on Grounds. Most recently, he spoke about the public speaking power of the Rev. Dr. Martin Luther King Jr. in “King’s Vibrato: Martin Luther King Jr. and the Sound of Blackness” on a panel about soundscapes in the Civil Rights Movement that was part of the October symposium in honor of Julian Bond. The talk about King comes from the subject of his current book project on the civil rights leader’s oratorical eloquence.

This academic year, Wallace is teaching a course on the films of Spike Lee and another on the work of James Baldwin.

Wallace argues that Baldwin, one of his favorite writers, deserves renewed attention in today’s cultural climate, where the meanings of racial and gender identity are so contentious.

Baldwin was a complicated figure, he said. “Baldwin is not only among the missing subjects of American civil rights history, he anticipated many of the contemporary concerns of American and African-American literature and cultural studies, including, especially, American identity politics,” Wallace wrote in describing his class.

Baldwin’s work helps us see “the sometimes invisible interplay between whiteness and power,” he said. “He challenges us as Americans to do the work of reexamining history and recreating ourselves, letting go of the myths that have informed American and African-American identity.”

Reading Baldwin as an undergraduate at Washington University in St. Louis changed his path, Wallace said. “His writing was arresting, revelatory. So many things have not changed as dramatically as we might’ve imagined,” he said.

“His nonfiction prose is almost peerless in the 20th century. It never ceases to inspire and challenge all of my students. We need him today more than ever to make sense of the ongoing social crises in places like Ferguson, Missouri and Baltimore that led to the Black Lives Matter movement.”

Wallace said his scholarship is continuously informed by, and in conversation with, today’s pressing social issues. He’s currently working on an article about today’s protesters, called “It’s Moanin’ Time,” which explores embodied protest as ritual mourning.

“It’s protest and procession in the same moment,” he said. “Few people see an entire community ritually expressing grief. Even grief can be an important political display. It’s an emotion that says, ‘Enough is enough.’ In the streets, whole communities grieve aloud for their losses, and at the same time, declare their stakes in the racial politics of the day.”

The piece might become a sermon, he said. Wallace remains devoted to his flock in Durham, North Carolina, where he is a minister at the Cornerstone Community Church, returning there almost every weekend.

Wallace earned his Ph.D. at Duke University and taught at Yale University before going back to Duke as a faculty member. The author of “Constructing the Black Masculine: Identity and Ideality in African American Men’s Literature and Culture, 1775–1995,” he was awarded the Modern Language Association’s William Scarborough Prize for outstanding scholarly study of black American literature in 2002.

What Is the ‘4th Side’? END_OF_DOCUMENT_TOKEN_TO_BE_REPLACED