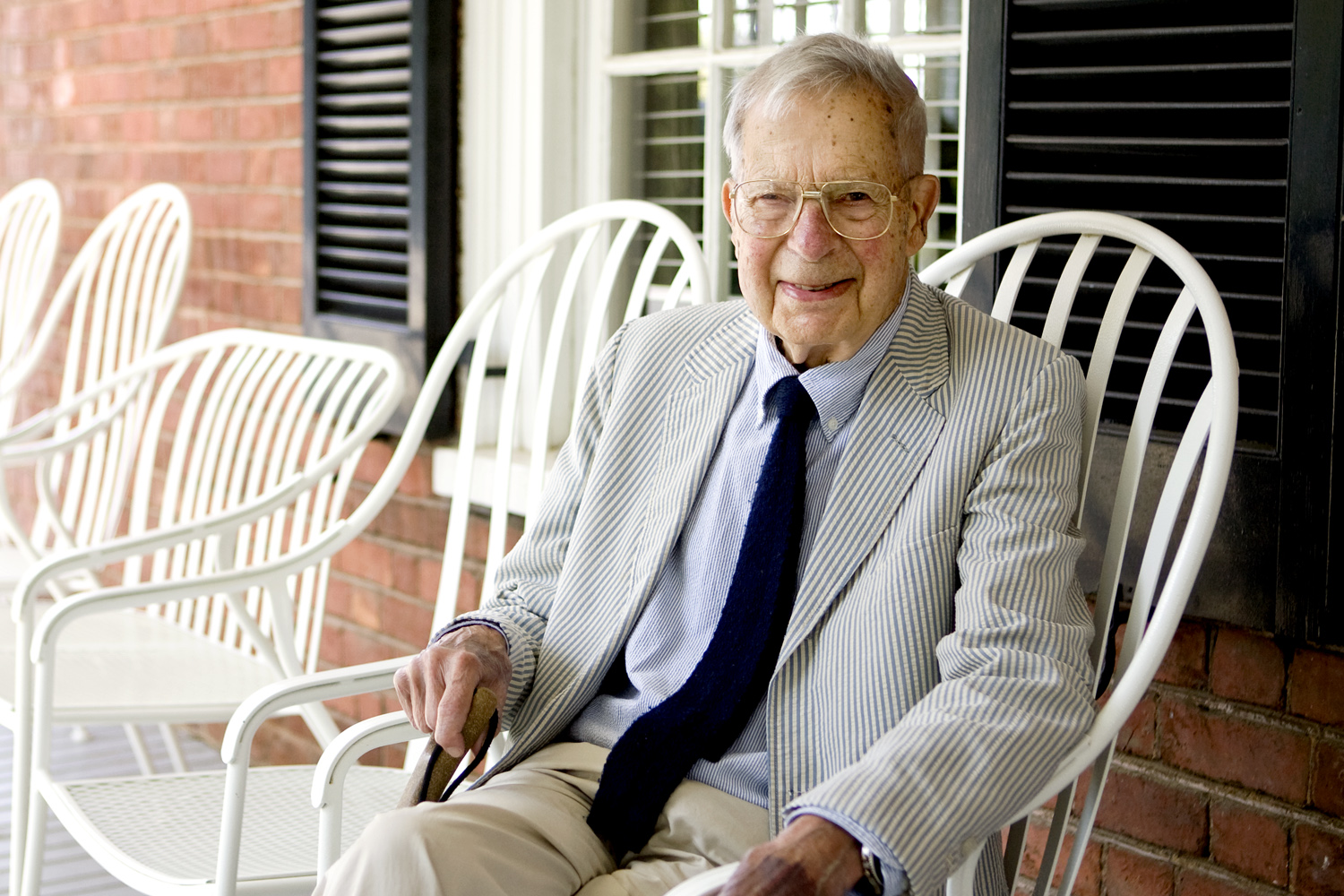 Music professor emeritus Ernest &amp;quot;Boots&amp;quot; Mead, for whom the Mead endowment is named

This year’s Mead Endowment projects range from an album of children’s music to a science book club; the recipients include nine professors from across the College, as well as one from the Darden School of Business and one from the School of Engineering and Applied Science.

Mead Endowment chair Tom Darbyshire, who graduated from U.Va. in 1982 with an architecture degree, and several fellow alumni created the endowment to continue the U.Va. tradition of close student-faculty relationships – a tradition embodied by music professor emeritus Ernest "Boots" Mead, for whom the endowment is named.

Meredith Jung-En Woo, the Buckner W. Clay Dean of Arts & Sciences, said the Mead Endowment grants exemplify a particular trait of the College and the larger University: the ability to offer the intimacy of a liberal arts college amidst the resources of a major research university.

“Even if it’s just a few minutes of conversation over a cup of coffee, personal interactions with a faculty member can make an important difference in the life of a student,” Woo said. “The University has a long and important tradition of this type of interaction. Thomas Jefferson himself often invited students up to Monticello for meals. Today, programs such as the Mead Endowment help us preserve that legacy.

“In addition, the grants allow faculty members to stretch out and undertake interesting projects that they might not otherwise have been able to pursue.”

This year, the Mead Endowment and the College have also teamed up to create “Mead Money,” a $10 voucher good at any University dining facility. Two vouchers will be distributed to all College faculty members, but are usable only if the professor has an undergraduate student in tow. Darbyshire said he also hopes the faculty members who make use of it will turn to social media to share their experiences.

“I think it’s going to encourage hundreds of faculty-student interactions that otherwise would never have taken place,” Darbyshire said. “We’re also encouraging the professor and their guest to eat together and tweet together. There are a variety of ways for them to share the result of their meal, whether they post a picture to Twitter or Instagram, post a message to our Facebook group or send us an email. That’s a great way for everyone in the group to be able to see how their contributions are being used, and hopefully to inspire other faculty to use the vouchers.”

This year is also the first year Engineering School faculty members have been invited to participate. That expansion grew from a new endowment designed to honor the legacy of former engineering professor Henry Lee Kinnier.

“Professor Kinnier was a much beloved faculty member in the Engineering School, who, like Ernest Mead, was a special friend to students for many decades,” Darbyshire said. “In his honor, former students are contributing money so that an engineering faculty member will be able to participate each year.”

Affron is a faculty member and curator at the Fralin Museum of Art, which is featuring an exhibition, “Jean Hélion: Reality and Abstraction.” This fall, Affron is also leading an undergraduate seminar on the theme of abstract art. His Mead project is a field trip for the 12 seminar students to the A.E. Gallatin Collection at the Philadelphia Museum of Art to further expand his students’ experience of the work of Hélion and his colleagues, as well as a follow-up gathering for the students hosted at the home of Hélion’s son, Louis Blair.

Inspired by the Arab Spring, Al-Samman will explore the historical roots of the concept of democratic change and its manifestations in contemporary film and literature with students from her “Culture and Society of the Contemporary Arab Middle East” course. The project will include a series of eight cultural nights, during which participants will focus on a separate Arab country that has either completed or is in the midst of a revolution. They will watch a film from that region, interview citizens from that country and enjoy its food. The semester will conclude with a field trip to Washington, D.C., where the students will attend a screening of the movie “18 Days” at the Arabian Sights Film Festival and have a discussion with the director. The trip will include a visit to the American Arab Institute and KARAMAH: Muslim Women Lawyers for Human Rights. The trip will end with a traditional Middle Eastern dinner and poetry reading at the famous Lebanese Taverna restaurant.

Coffey will work with a handful of music department undergraduates to create an album of children’s music. The students will write, perform and produce the music, which will be recorded at studio in Charlottesville. The project will also include collaboration with community members and groups, possibly including performances. At the end of the project, Coffey will host a release party.

Elzey will identify a small group of third-year engineering students to participate in a series of evening seminars. These seminars will introduce the participants to the life and work of an engineering faculty member, and also guide them in the preparation of an “Introduction to Engineering” seminar they will be required to deliver to a high school audience in the spring. The dinners will also feature invited guest speakers.

There are two facets to Greeson’s “dream idea” project. First, she is teaching a 20th-century “Literature of the South” course this fall. Demand for the course has caused it to expand to 80 students, which is larger than she would like. For part of her Mead Endowment project, she will suspend the usual lecture-and-small-section format for the final week of the class, and instead split the class into two smaller groups. These groups will separately attend a dinner-and-a-movie evening in which they will have a catered Southern-style meal and discuss the film they watched.

In the second part of her project, Greeson will present a “Why Read?” symposium – built on an initiative begun last year by colleague Anna Brickhouse – that will serve as both a rallying point for English majors and an information session for other students interested in the department. This event will feature English professors speaking briefly about what teaching their specialties at U.Va. means to them, with a modest reception afterward. To keep the energy going afterward, she will also create a series of four book club-style meetings. In each, students would read a book over winter break and then meet to discuss it in the early weeks of the spring semester.

Over the past two years, Group has lectured to 200 pre-med students per year in his introductory physics course. One of his favorite parts of that experience is incorporating of numerous demonstrations into the lecture. For his project, he will organize a series of meetings with physics majors where they investigate the demos and think about how they work. In addition, the students will discuss new ways to use and improve the demos already in use, and consider building additional ones. At the conclusion of the project, students will present demos at the annual “Physics Day Show,” a performance open to the general public that illustrates basic physics principles.

Grushka-Cockayne will take three students to the TEDxWomen 2012 events in Washington, D.C., which is organized around the theme “The Space Between.” To select this small group of students, she will ask those interested to submit a proposal for a short TED talk. This proposal may be in any form of media, but similar to the TEDxWomen 2012 organizers, she will encourage the submission of a short filmed talk. All the submitters will then vote on the three best, who will be invited to attend the event. Grushka-Cockayne is also applying to be a TEDxWomen speaker, and – if approved by organizers – could involve the students in the talk.

Henriksen will host a “Reading Science” book club for 25 third- and fourth-year science students during the academic year. Participants will read books selected from some of the best science literature and discuss them at Henriksen’s home over a catered dinner. Approximately five students will be invited to each meeting. Themes for discussion will include the culture of science itself, specifically the nature of perception, evidence and truth; instances where science is in conflict with another culture; and the role of the individual in science.

Marshall will ask a small group of Japanese language majors to explore with her Japanese culture in ordinary life. For the purpose of starting a conversation with the students, Marshall will ask them to share their experience of “bizarre” Japanese culture, perhaps beginning with Japanese food and diet. Based on that, they will choose resources they can look into, such as video clips, blogs or written texts. After that, they will come up with ways to satisfy their desire to meet some Japanese people in Charlottesville who can share their extraordinary experiences in their ordinary lives. Then, the process of dialogue will continue. Through the course of the project, Marshall plans to include hands-on activities, such as field trips or visits to local businesses.

McLeod’s project will be to produce a work of theater created by undergraduate drama students, transport the show to New York and produce it for two nights in an “Off-Off Broadway” venue. Organizers could then invite various industry contacts in New York and make the performance a showcase of the students’ talents to possible employers.

Ward will introduce small groups of students to the ways Italy and Italian culture influence U.Va., Charlottesville and Albemarle County. Planned activities range from a visit to Monticello or a local winery to less obvious choices, such as viewing Italian art held at The Fralin Museum of Art or learning about Charlottesville’s Italian sister city, Poggio a Caiano. These events would allow participants to talk about Italy from different perspectives: regional, historical period or type of culture. It will also allow Italian studies majors to connect with aspects of Italian that are beyond the academic. There would likely be two or three outings per semester, each limited to between 10 and 15 students.

UVA Today will feature several of the projects throughout the coming year.

When Less Is More: How Harnessing the Power of Subtraction Can Add to Life END_OF_DOCUMENT_TOKEN_TO_BE_REPLACED