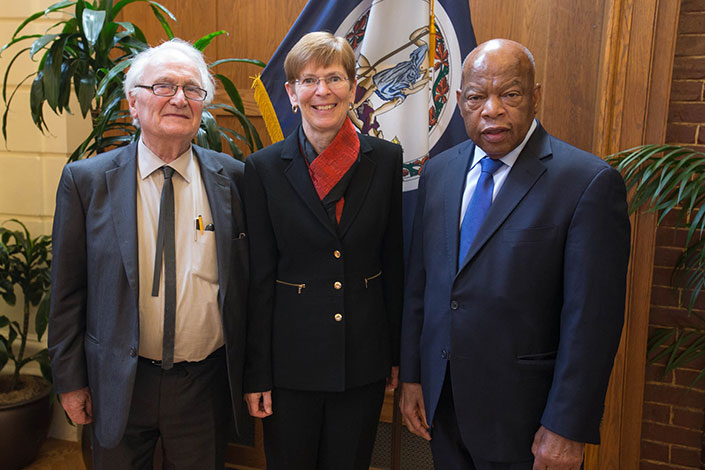 On Monday, the 272nd anniversary of Thomas Jefferson’s birth, the winners of this year’s Thomas Jefferson Foundation Medals in Architecture, Law and Citizen Leadership each inspired audiences in public talks about distinguished careers that encompass, respectively, the leadership challenges of Civil Rights activism, the architectural discipline of shaping public spaces and the complexities of international law.

The highest honors bestowed by the University of Virginia and the Thomas Jefferson Foundation – the independent, nonprofit organization that owns and operates Monticello, Jefferson’s historic estate – the medals were awarded Monday during Founder’s Day festivities.

U.Va. President Teresa A. Sullivan and Leslie Greene Bowman, president and CEO of the Thomas Jefferson Foundation, presented the medals – struck for the occasion – at a luncheon in U.Va.’s Garrett Hall. The recipients also were to be honored late Monday at a private dinner at Monticello.

In addition, this year’s Founder’s Day tree planting honored the memory of the enslaved laborers who built and maintained the University from 1817 to 1865. Placed in front of Pavilion IV on the upper tier of the Lawn, this living memorial will serve as a focal point for students, faculty, staff and visitors to reflect on and commemorate these individuals. The archives of previous tree planting honorees can be found here.

‘Never Give Up,’ Lewis Urges Audience

At 23, he was one of the chief organizers and a keynote speaker of the historic 1963 March on Washington and became known as one of the “Big Six” leaders of the Civil Rights Movement. In 1986, he was elected a U.S. Representative from Georgia, a position he still holds.

At his talk in the Albert and Shirley Small Special Collections Library Auditorium, Lewis mixed humor with conviction as he discussed his humble beginnings, his first inkling of leadership and his continuing work in Congress.

One of nine children born to sharecroppers in Pike County, Alabama, Lewis said his father eventually bought 100 acres of land. The younger Lewis never liked working in the cotton and peanut fields; at about 8 years old, he thought he wanted to be a minister, and enlisted siblings and cousins to gather the chickens so he could practice preaching to them.

Lewis joked that he gets a similar reception in Congress, where he is working to try to get the House of Representatives to restore parts of the Voting Rights Act that the U.S. Supreme Court reversed last year. He’s also working to get immigration legislation passed, he said. “The vote is the most powerful nonviolent tool in a democracy, and we have to use it.”

When Lewis began to question segregation as a youth and was told to stay out of trouble, he said he heard about Rev. Dr. Martin Luther King Jr. and Rosa Parks on the radio and realized sometimes it might be necessary to cause trouble.

“Leaders should be prepared to get in trouble,” said Lewis, a lifelong proponent of nonviolence, which he studied at Fisk University and practiced in protests and civil rights activities. Although he called himself “a participant” rather than a leader, when the need arose, he helped train protesters about how to handle violent acts against them, he said.

English professor Deborah McDowell, director of U.Va.’s Woodson Institute of African-American and African Studies, said students who went on last month’s Civil Rights South Seminar described meeting Lewis as a highlight of the trip. Lewis emphasized the need for children and young people to learn the history of the Civil Rights Movement, including the songs that inspired hope, optimism and solidarity.

Fourth-year student Terry Mason, president of the Batten Graduate Council, said meeting with Lewis was “awesome” and “a privilege.” They had a great talk, Mason said, about the pros and cons of “working within the system or flipping it on its head.”

Despite the violence of the 1960s and setbacks at times, Lewis said he never gave up because there was too much work to do. He urged them to “be bold, be courageous. … Be a headlight, not a taillight.”

Herman Hertzberger is a rarity: an architect who excels as a designer, theorist, writer and educator. Acclaimed as a sociological architect and creator of innovative spaces, he is considered one of the world’s most important architects.

Architecture students, faculty and staff filled the Ruth Caplin Theatre Monday to capacity to hear the renowned Dutch architect speak about his half-century of experience in the field.

Throughout his career, Hertzberger has envisioned architecture in terms of human well-being and dignity. In his presentation, “About Basics of Architecture,” Hertzberger spoke good-naturedly about his own work and other architectural examples that illustrate the importance of shared human architectural space.

“Regardless of how the architecture of the future will appear, it must be oriented toward physical and mental accommodation,” he said. “Whatever happens and whatever we do, it matters as long as it is about improvement of conditions and human dignity.”

As the citation for his Thomas Jefferson Foundation Medal in Architecture states, Hertzberger’s work is “grounded in a deep concern for the human condition. …[and] is marked by the imaginative fusion of spatial frameworks with the practices of everyday life.”

Hertzberger’s contributions are germane today as increasing numbers of architects seek to be responsive to the communities they serve. As projected photos of his famous and remarkable buildings in the Netherlands – Montessori School, Central Beheer Office Building, Diagoon Housing, Vrendenberg Music Center, NHL University and the Ministry of Social Affairs – demonstrated, Hertzberger has been doing this through the careful observation of daily life and the re-imagination of buildings for over 50 years.

In 1960, Hertzberger opened his own firm, the present-day Architectuurstudio HH, known for its many schools, housing complexes and cultural centers, both in the Netherlands and in other countries. In 2012, Hertzberger received the Royal Institute of British Architects’ prestigious Royal Gold Medal, given in recognition of a distinguished body of work.

Hertzberger’s buildings shape the public realm at all scales. His preoccupation with the ‘in-between’ nature of architecture is related to what differentiates the University’s historic Grounds from many campuses, he said; in his talk, he praised the University’s Academical Village, Lawn and “the many wonderful spaces and places where people settle and meet.”

“Hertzberger is especially concerned with spatial thresholds that are open to individual appropriation,” said Elizabeth Meyer, dean of U.Va.’s School of Architecture, in introducing Hertzberger. “His conception of architecture transcends the image, or the representational character of a façade. These lessons are especially timely this year as we seek to create contemporary interpretations of Jefferson’s conception of an Academical Village through new programs and places.”

Hertzberger encouraged architecture students to focus on “what makes sense, what people need” and not on “the architectural dream of making monuments for an eternity.” He emphasized that the discipline should not be about the ego – on being on the cover of a book or a magazine – but that architecture’s “first basic condition was to organize space in such a way that people are kept together, to give them a feeling of belonging.”

He spoke of the importance of public spaces such as churches, streets and library reading rooms, and mentioned that as a small boy, he would go to museums to be with people so as not to feel alone.

“Architecture is the discipline, more than any other, that can actually make connections between people happen,” Hertzberger said. “It is ultimately meant for supporting the daily life of people.”

The International Court of Justice operates through a unique blend of the legal traditions of the nations represented on the court, Judge Joan E. Donoghue told an audience at U.Va.’s School of Law on Monday.

Donoghue, the first American woman to serve on the court, also called the World Court, was elected to the bench in 2010 after a long career at the State Department that culminated in her role as principal deputy legal adviser from 2007-10.

Established by the U.N. Charter in 1945 following World War II, the World Court renders advisory opinions to the United Nations and considers issues among states involving violations of international law or treaties, including a “steady diet of land and maritime boundary cases,” Donoghue said in remarks that painted a picture of how the court operated.

“When you hear the expression ‘border skirmish,’ it sounds like something small, but it’s probably not small if you’re one of the people being shot at in that disputed border territory,” she said.

Only six of the 15 judges, including Donoghue, come from nations based on common law principles – meaning courts operate under an adversarial system in which judges serve as referees, jury trials are common, witnesses must testify in court and rulings set precedent. The United States, England and Australia hew to a common law system, while much of continental Europe and many international courts operate under a tradition set by the French civil law system.

“There is something of a mix there, but I would say [the World Court’s] tendency over time [is] to operate and communicate in a manner that’s a bit closer to a common law court than a civil law court,” she said.

The civil law system emphasizes statutes over case precedent and concentrates power in judges’ hands. Rulings are typically short and refer to the related statute rather than expounding on the reasons behind the decision.

“I think the most important responsibility of any judge in any court and certainly our court is to bring an element of self-awareness to our jobs,” Donoghue said. “We are all creatures of our history. I am American-trained, and I am a U.S. national, and when I have an immediate instinct to a question of law, to a question of fact, to a question of procedure, I have always to ask myself, ‘Why do I have that reaction? Why does my colleague from Uganda, or my colleague from Mexico have a different reaction?’ And sometimes when you scratch the surface, it turns out that one of the reasons is this difference in training on the civil law and common law side.”

The World Court offers a stage for two nations to have their argument heard, Donoghue said. While 20 percent of the court’s work is advising the U.N., the remainder is devoted to deciding such “contentious cases.”

“Those look a little bit like a civil case in our system, in the sense that you have one state bringing a case against another state,” she said.

Unlike in traditional common law courts, World Court decisions do not serve as precedent and only bind the parties before the court, she said.

“But of course when lawyers look to figure out the content of international law generally, they give weight to what the International Court of Justice has said about international law, so states have to be concerned about the possibility that their conduct could be judged in our court,” Donoghue said.