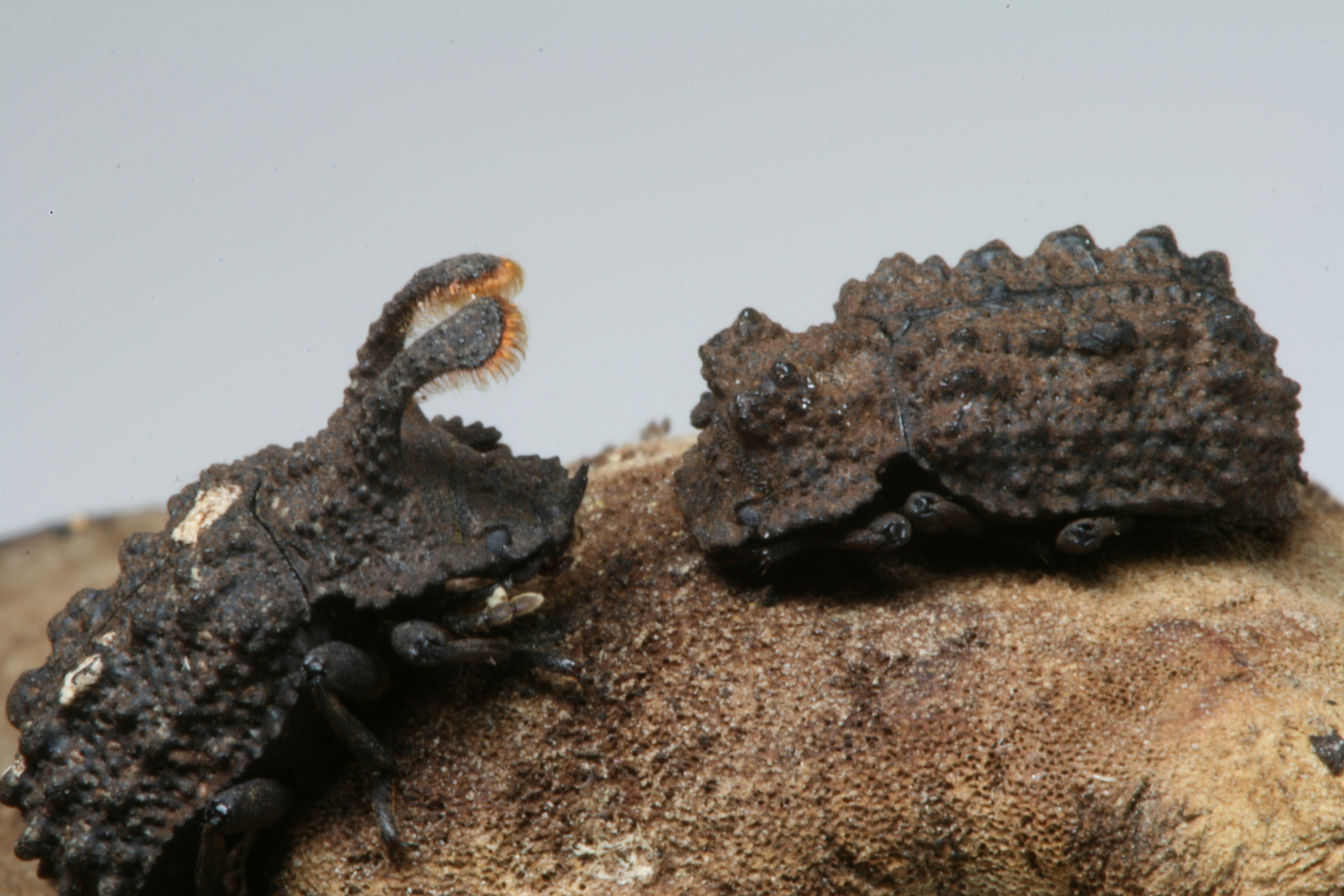 Think of them as a group of guys, hanging out together, but not spending much time with the ladies, nor getting much "action." Except these "guys" are forked fungus beetles.

Forked what? Yes, forked fungus beetles. Like other insects and animals, they have their own societies. Most are highly social, but some hang out in small guy groups.

It turns out, maybe not surprisingly, that the cliquish ones – the small groups of male beetles that live on the fringes of society with their buddies – are less likely to meet up with females, copulate and pass on their genes to offspring.

Why does it matter? Because social interactions likely are the products of evolution by natural selection – Charles Darwin's description for nature's process whereby characteristics that help individuals to survive and propagate are spread through the population.

And so forked fungus beetles and their activities are of immense interest to Vince Formica and Butch Brodie, evolutionary biologists in the University of Virginia's College of Arts & Sciences. They study the beetles in a remote forest near U.Va.'s Mountain Lake Biological Station in southwest Virginia.

"Forked fungus beetles are not pretty – they look like tree bark – but they're helping us better understand the evolution of social behavior," Formica said. He is the lead author on a paper about the study published in the January edition of the Journal of Evolutionary Biology.

Formica and his team wanted to know if an individual beetle's place in society is related to its reproductive success.

"In the world of evolutionary biology, we are interested in how natural selection can shape traits or characteristics of organisms," he said. "Studying social networks are a way of analyzing the structure of animal societies. In this case, we were asking if an individual's position in a social network is a trait or characteristic of an individual that can experience natural selection. Apparently it is."

Formica said there are essentially two parts to evolution by natural selection: The first is a trait related to the number of offspring produced, and the second is the ability to pass that trait on to offspring, what scientists call heritability.

"We've shown that the trait of sociability is under natural selection, but we don't know yet if it's heritable," he said. "This is one of only a few studies that has shown that position in a social network is a trait that can experience natural selection and therefore has the potential to evolve. It's clear in this study that being central in a large social network is key to high reproductive success. If a trait – such as an individual's position in a network – is related to reproductive success, you can say it is experiencing natural selection and has the potential to evolve."

Formica chose forked fungus beetles as his study models partly because they are easy to capture, tag and observe.

"We can sit and watch their whole universe," he said.

But the beetles are nocturnal, so researchers spend long nights in the forests watching them.

"We drink a lot of espresso," he said.

The biologists tag the beetles with extreme-miniature ID numbers that glow when scanned under ultraviolet lights. The researchers then are able to watch their social activities – everything from fighting to eating to mating, to just sitting there like bark on logs.

Formica's team, made up mostly of undergraduate students, observed that some of the beetles are very social and have a large network of friends. These active beetles also have a lot of sex. But the male beetles that have small social networks – just a few male friends – tend to spend little time with females and copulate rarely.

"Do individual behaviors cause their position to evolve, and does it cause the society to evolve as well? That's what we're attempting to answer," he said.

While Formica is hesitant to draw direct connections from his findings to the romantic lives of humans, he does believe that uncovering how social networks operate, even in a tiny bark-shaped beetle, is vital if we want to understand how all societies evolve.