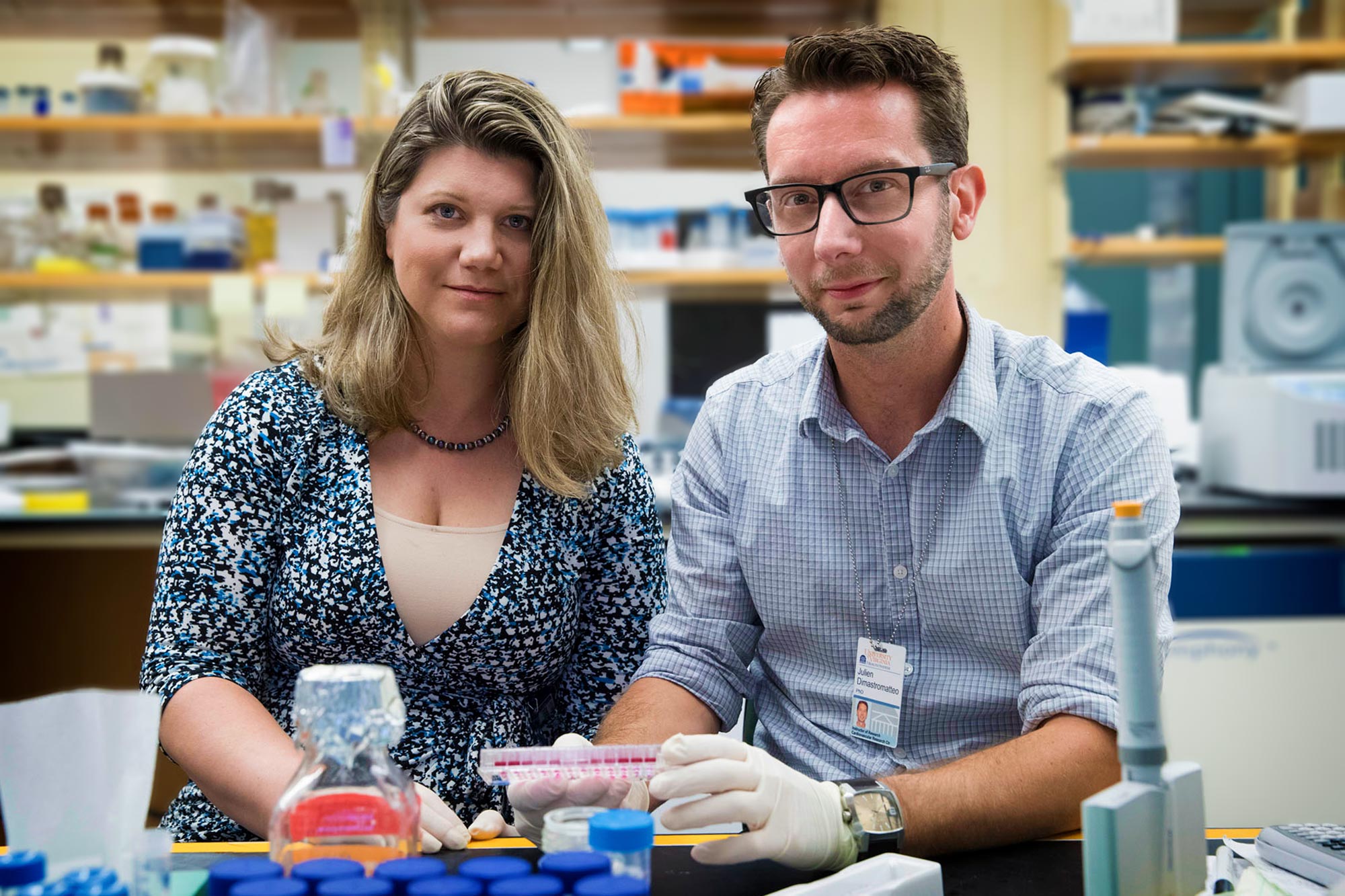 A company started by a University of Virginia faculty member is developing a drug with the potential to treat multiple cancers without the severe side effects of chemotherapy.

The company, called iTi Health, was founded in 2010 by Kimberly Kelly, an associate professor of biomedical engineering. It recently won new funding during the McIntire School of Commerce’s Galant Challenge, which helps connect UVA-affiliated startups with venture capitalists.

Kelly, who teaches and runs a laboratory at UVA, started iTi after she discovered a protein, called plectin, which is found on the cell surface of certain cancer cells, but not on healthy cells. She first discovered the protein in 2008 while researching pancreatic cancer, and has since identified it in other cancers, including ovarian cancer, head and neck cancers, esophageal cancer and more.

Kelly founded the company to help take that research from the laboratory to consumer shelves, a transition that has required her to be both academic and entrepreneurial.

“In order to develop drugs and therapies, you really have to start thinking about commercialization and the realities of the business world,” she said.

The first is a scanning tool that can identify the protein and alert doctors to possible cancer cells. Right now, the scan is being tested in clinical trials.

“Doctors treating patients who have symptoms could use the scan as a diagnostic tool, and as a screening tool for patients at high risk for certain cancers,” Kelly said.

Kelly’s team is also working on a new drug treatment for plectin-positive cancers. So far, it has proven effective when tested on cell samples and on animals. The drug specifically targets the plectin protein, using it to identify and kill cancer cells. The hope, Kelly said, is that the treatment can eliminate cancer cells while avoiding damage to healthy cells, which do not have plectin.

“Chemotherapy attacks healthy cells as well as cancerous cells and has high toxicity and painful side effects,” she said. By targeting only cells with surface plectin – in this case the cancer cells – we could minimize those side effects.

“We hope this treatment will be more discriminatory and deliver more drug into the tumor and less into other cells, which could help patients tolerate treatment much better,” Kelly said.

With the additional funding from the Galant Challenge, Kelly and her team will conduct final preclinical trials, which do not involve human patients, before beginning FDA-sanctioned clinical trials, offering the drug to patients with plectin-positive cancers.

Kelly said that administrators and mentors at UVA have been very supportive of her entrepreneurial venture and have actively encouraged her to build iTi even as she continues her teaching and research. She was initially drawn to UVA’s biomedical engineering department, which she joined in 2008, because it received a Coulter Translational Research Partnership Award, honoring research that can make an immediate and significant impact.

Kelly has also partnered with the UVA Cancer Center, one of 69 designated national cancer centers and home to a growing group of researchers and caregivers dedicated to eradicating cancer.

“This kind of work is exactly what we should be doing and what we have talked about doing as a cancer center,” she said.

What’s Next for UVA’s Class of 2022? END_OF_DOCUMENT_TOKEN_TO_BE_REPLACED