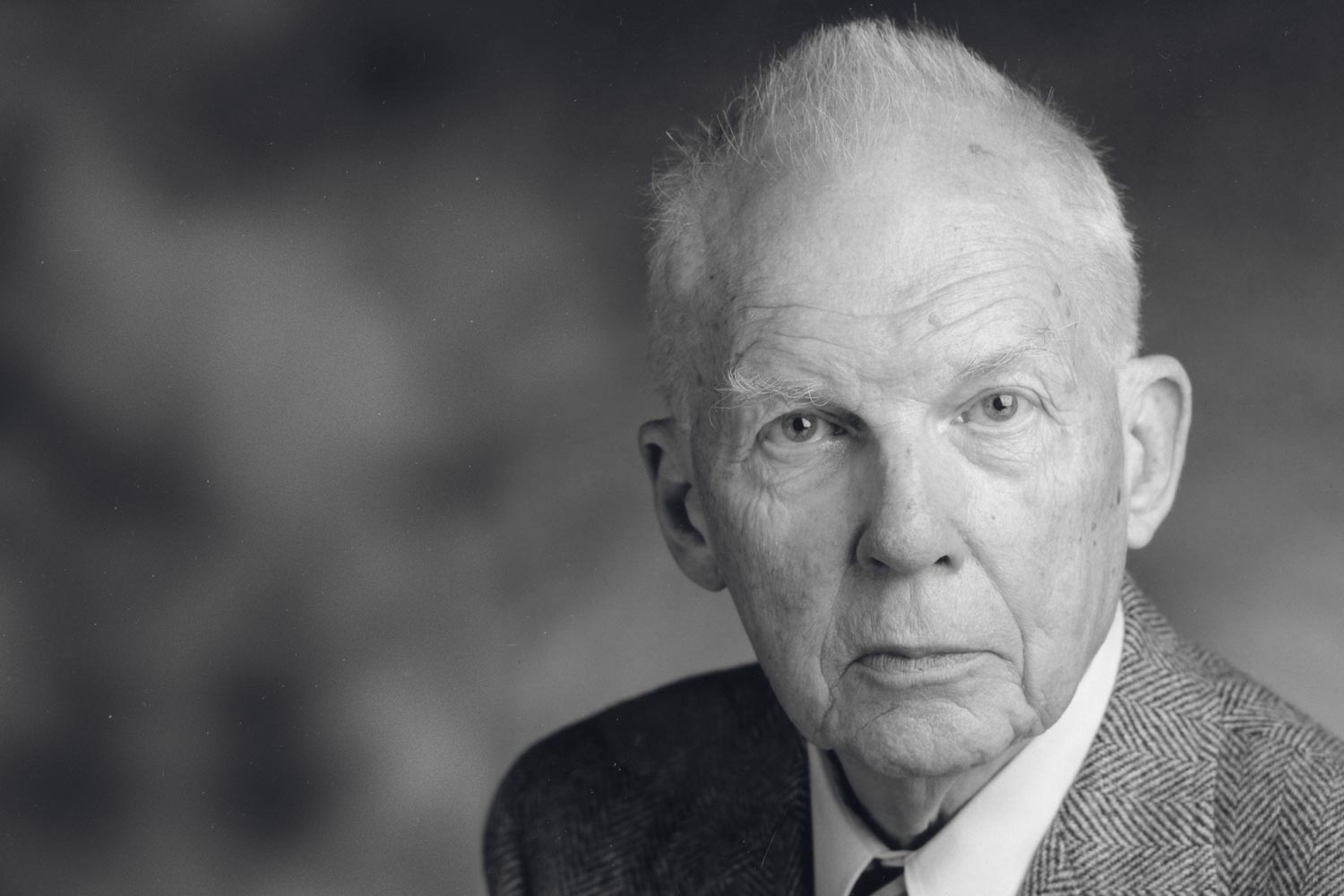 Professor John Douglas Forbes, a founding member of the University of Virginia Darden School of Business faculty and its first director of admissions, died Friday at age 107. His extraordinary long life and career helped build Darden from a small startup to a nationally and internationally recognized top business school.

Darden’s first dean, Charles Abbott, made Forbes the school’s first professor in 1954 before its doors opened to students the following year. He helped to design the curriculum for its inaugural class in 1955. Forbes taught management communications and business history until he retired in 1980.

Like many of Darden’s early faculty members, Abbott and Forbes both earned their doctorates from Harvard University. Forbes had studied under Harvard historian Wilbur Abbott, Dean Abbott’s father.

Unlike most of his academic colleagues at Darden, Forbes did not arrive at UVA with the traditional areas of expertise for a business school professor.

He had served as curator for paintings at the San Francisco World’s Fair (1938-40) and taught history, fine arts and communications at Wabash College, Bennington College and other liberal arts institutions after completing his Ph.D.

“So tied to the Darden School was he that, on occasion of his retirement, Forbes recalled, ‘I was carried out kicking and screaming,’” former Darden professor Mark Reisler wrote in “Darden: A Pictorial History of the University of Virginia’s Darden Graduate Business School of Administration.” “Forbes did all he could to foster student creativity and breadth of thinking.”

Forbes summed up his own quarter-century career at Darden in the book: “I have tried to give our students an outlook and training which will contribute two ends: give them competitive advantage over the products of other business schools and strengthen the business community by helping business people be civilized and responsible.”

Upon Forbes’ retirement in 1980, then-Dean C. Steward Sheppard described the professor as “the quintessence of the Renaissance man. His varied interests, his sly pokes with a twinkle in his eye, his creativity and meticulous scholarship, and his generosity of time and money are all left as a heritage to some 2,100 alumni.”

Forbes’ impact spread beyond Darden to the broader UVA community. After his retirement, he taught a popular course on art and architectural history in UVA’s School of Continuing and Professional Studies until 2003. He also served as the inspiration for a new, upper-level writing and public speaking seminar for undergraduate students in the College and Graduate School of Arts & Sciences. A $250,000 gift from 1963 Darden alumnus Lee Forker Jr. in 2016 helped launch the John D. Forbes Seminar for Career-Focused Writing and Communications.

Darden’s first professor is perhaps best remembered for his dedication to students’ writing and presentation skills, which he taught for decades in his “Analysis and Communication” course.

“I don’t remember too much from my finance courses back then, but I still know the difference between objective and subjective case, thanks to Professor Forbes,” Forker said in an article recognizing his gift. “Many of us, from the early days of Darden, considered Professor Forbes’ course … to be the best class with the greatest impact on our careers.”

Forbes described his teaching in humble terms in “Darden: A Pictorial History.”

“I just taught them how to write simple English prose without such obscenities as ‘input’ and ‘feedback’; no jargon,” he said.

During his career at UVA, Forbes wrote biographies of American banker and financier J.P. Morgan Jr., Edward R. Stettinius Sr. and of the Victorian architect William Tinsley. He also wrote several murder mysteries, as well as numerous articles and papers. He served as editor of the Journal of the Society of Architectural Historians from 1953 to 1958 and received the Officier Ordre des Palmes Académiques from the French government, and the Cavaliere Ordine al Merito from the Italian government.

Netflix to Add Ads. Why This Could Be a ‘Game-Changer’ for Your Viewing Experience END_OF_DOCUMENT_TOKEN_TO_BE_REPLACED

What’s Next for UVA’s Class of 2022? END_OF_DOCUMENT_TOKEN_TO_BE_REPLACED