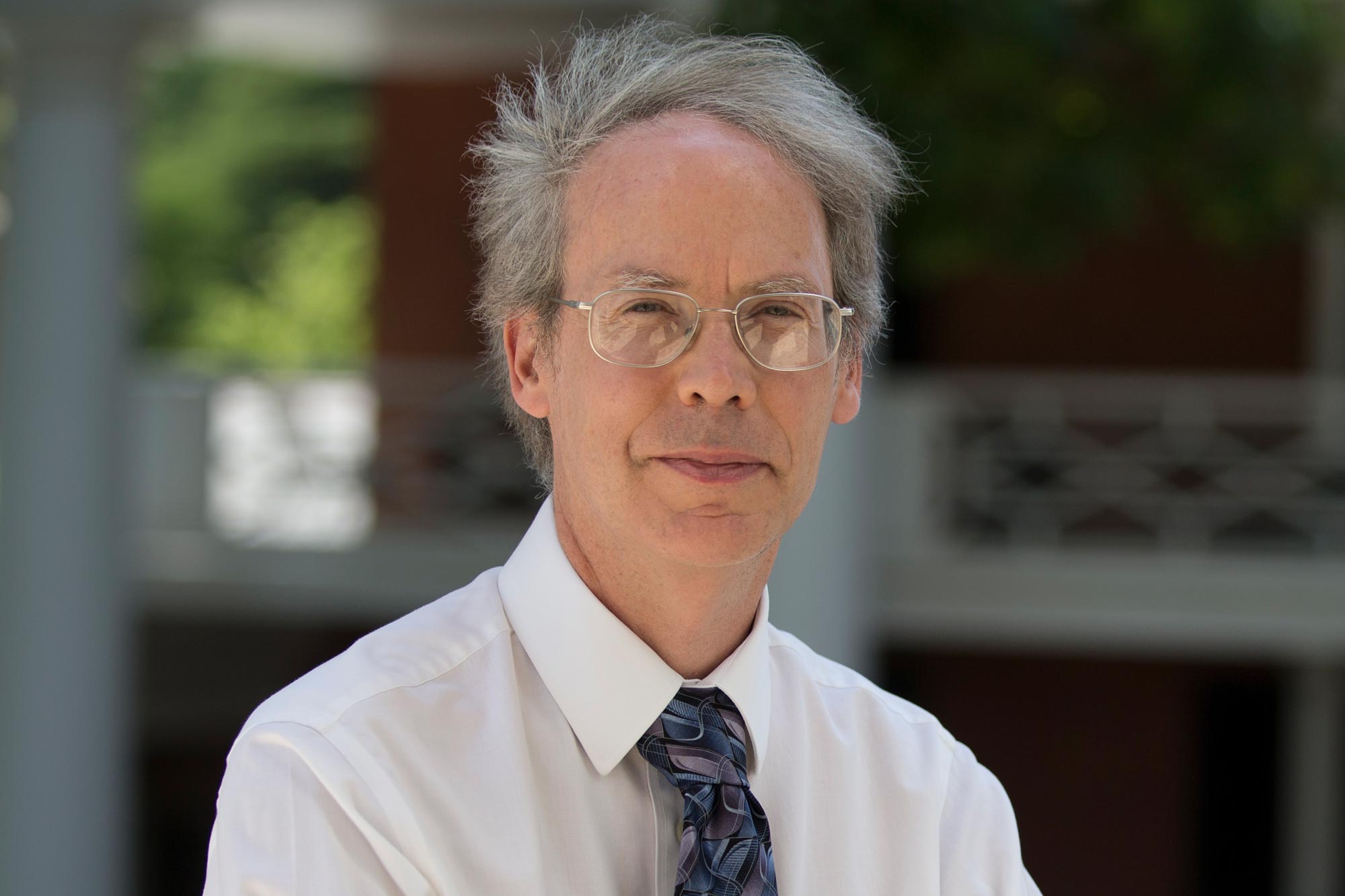 John Hawley, an international award-winning University of Virginia astrophysicist and the senior associate dean for academic affairs for the University’s College and Graduate School of Arts & Sciences, died of cancer on Sunday at his home in Earlysville. He was 63.

It would be difficult to overstate the impact that Hawley had at UVA and within the international community of astronomy researchers. The John Dowman Hamilton Professor of Astronomy, Hawley was a member of the University’s faculty for 34 years.

Born Aug. 23, 1958, in Annapolis, Maryland, Hawley moved with his family to Salina, Kansas, when he was in first grade. His older brother Steven was interested in astronomy and was a significant influence on John’s passion for science, which was also fueled by the Apollo space program during his preteen and teen years.

John Hawley grew up to be a brilliant, award-winning astrophysicist who greatly advanced the world’s understanding of black holes. By his self-deprecating recollection, however, it wasn’t until he and former UVA colleague Steven Balbus were named co-winners of the Shaw Prize in Astronomy eight years ago that he got a chance to finally outshine his older brother, a former astronaut who flew on five U.S. space shuttle flights.

“I always said somebody would say to Steve one day, ‘Aren’t you John’s brother?’” John Hawley told his Kansas hometown newspaper, the Salina Journal, in 2013 after winning the Shaw Prize, widely considered Asia’s equivalent to a Nobel Prize for a category (astronomy) that the Nobel does not specifically include. “It’s hard to beat an astronaut.”

Hawley will be remembered by his colleagues as a brilliant computational astrophysicist who also lent his stature to influential leadership positions within the College as a department chair and associate dean. He came to UVA in 1987 from the California Institute of Technology. Seven years after his arrival on Grounds, Hawley won the Helen B. Warner Prize of the American Astronomical Society, which is awarded to an astronomer under the age of 36 for a significant contribution during the five years preceding the award.

His research focused on the physics of gas accretion. While accretion is ubiquitous in the universe, the physical mechanism that drives it was not well understood. Working with Balbus in the 1990s, however, Hawley identified a powerful instability in magnetized gases that drives the turbulent flow, allowing a detailed understanding of the accretion process. Today, the “magnetorotational instability” is applied to study a wide variety of celestial objects, UVA astronomy chair Phil Arras said, from accretion disks around black holes to the disks from which stars and planets form.

“John also contributed fundamental insights in computational astrophysics,” Arras said. “With the recognition that many fluid dynamics processes are too complicated to understand with pencil and paper calculations, John was a leader in developing numerical algorithms to solve for the evolution of magnetized fluids, allowing a detailed study of their behavior. With these computational tools, he and his collaborators were able to study disk accretion of gas, the formation of jets, the efficiency of disks in emitting radiation, as well as the effects of general relativity on the gas flow.”

Hawley and Balbus, who has been Oxford University’s Savilian Chair of Astronomy since 2012, shared the 2013 Shaw Prize in Astronomy for their discovery what is known as the “Balbus-Hawley instability.”

“I was deeply saddened to learn the news that my friend and colleague John Hawley had passed away this weekend,” Balbus wrote in an email Monday, acknowledging how Hawley had been “struggling bravely” for two years against “a very cruel disease.”

“My thoughts of him now are of how we worked so well together, both in terms of our complementary skills and our compatible personalities. Our sustained output has, I believe, played a key role in the understanding astronomers have developed for interpreting observations of black holes, and has been applied yet more widely. That has been a source of great satisfaction to both of us. Professionally, I will remember John as a pioneering and highly talented numerical astrophysicist. Personally, I will remember him as a great friend with a devastating sense of humour.”

Indeed, Hawley’s sly sense of humor was brought up by his colleagues and admirers as much as his outsized contributions as an acclaimed researcher. Balbus wrote that one of his colleagues in the United Kingdom referred to Hawley as “the funniest man in astrophysics.”

Hawley’s UVA colleagues had similarly fond memories. A lover of cult classic films with an encyclopedic memory of Monty Python sketches and movie lines, Hawley prompted roars of laughter from his UVA astronomy colleagues while delivering after-dinner remarks at their department’s annual Kovalenko Dinner in 2017. That was the same year that Academy Award presenters mistakenly presented the “Best Picture” award to “La La Land” before famously correcting themselves on stage. Hawley’s wife, Katherine Holcomb, remembers him being handed an envelope containing the winner of that academic year’s award for the best teaching assistant, pausing for a second after opening it, then pronouncing in a deadpan manner, “La La Land.”

“I have never heard a room erupt like it did when he said that,” said Holcomb, a senior research systems consultant with the UVA Research Computing unit.

Hawley graduated from Haverford College in 1980 with a degree in physics and astronomy and obtained his Ph.D. in astronomy from the University of Illinois at Urbana-Champaign in 1984.  Hawley moved to the California Institute of Technology as a Bantrell Fellow before joining the University of Virginia faculty as an assistant professor in 1987.

He became a full professor in 1999 and was appointed chair of the College’s Department of Astronomy in 2006, a position he held for six years.

Hawley took on a higher leadership role in 2012, when he became the College’s associate dean for the sciences. Within that role, Hawley was deeply invested in the development of the University’s research computing capabilities. As an expert in high-performance computing, he advocated for the Rivanna computer cluster, which now serves the large-scale computing needs of many UVA researchers.

Ron Hutchins, UVA’s vice provost for academic technologies, called Hawley one of the strongest voices of support for research computing across his whole career on Grounds.

“Starting with my first meeting with John during the search process that brought me to UVA, John continued to be a voice of reason and experience in helping to build an infrastructure, a team, and in the not-distant past, a Grounds-wide model for research computing going forward,” Hutchins said.

In 2020, Hawley took on his final administrative role as the College’s senior associate dean for academic affairs.

“He dedicated so much of his life to UVA and was a peerless counselor, mentor and friend to so many of us,” Baucom said. “He not only advanced knowledge through his study of astrophysics and black holes, he also broadly lifted the sciences at the University as a wise, trusted and kind adviser to our whole STEM community.”

Hawley’s older brother retired recently as a professor of physics and astronomy at the University of Kansas. Just a few days ago, Hawley’s wife said, the former astronaut told her that he had been interviewing candidates for a space-related scholarship, and several of them had a specific question for him.

“Are you related to John Hawley?” they asked.

What’s Next for UVA’s Class of 2022? END_OF_DOCUMENT_TOKEN_TO_BE_REPLACED

How Affordable is UVA? END_OF_DOCUMENT_TOKEN_TO_BE_REPLACED