In Memoriam: Karenne Wood, a Lifelong Advocate for Virginia Indians 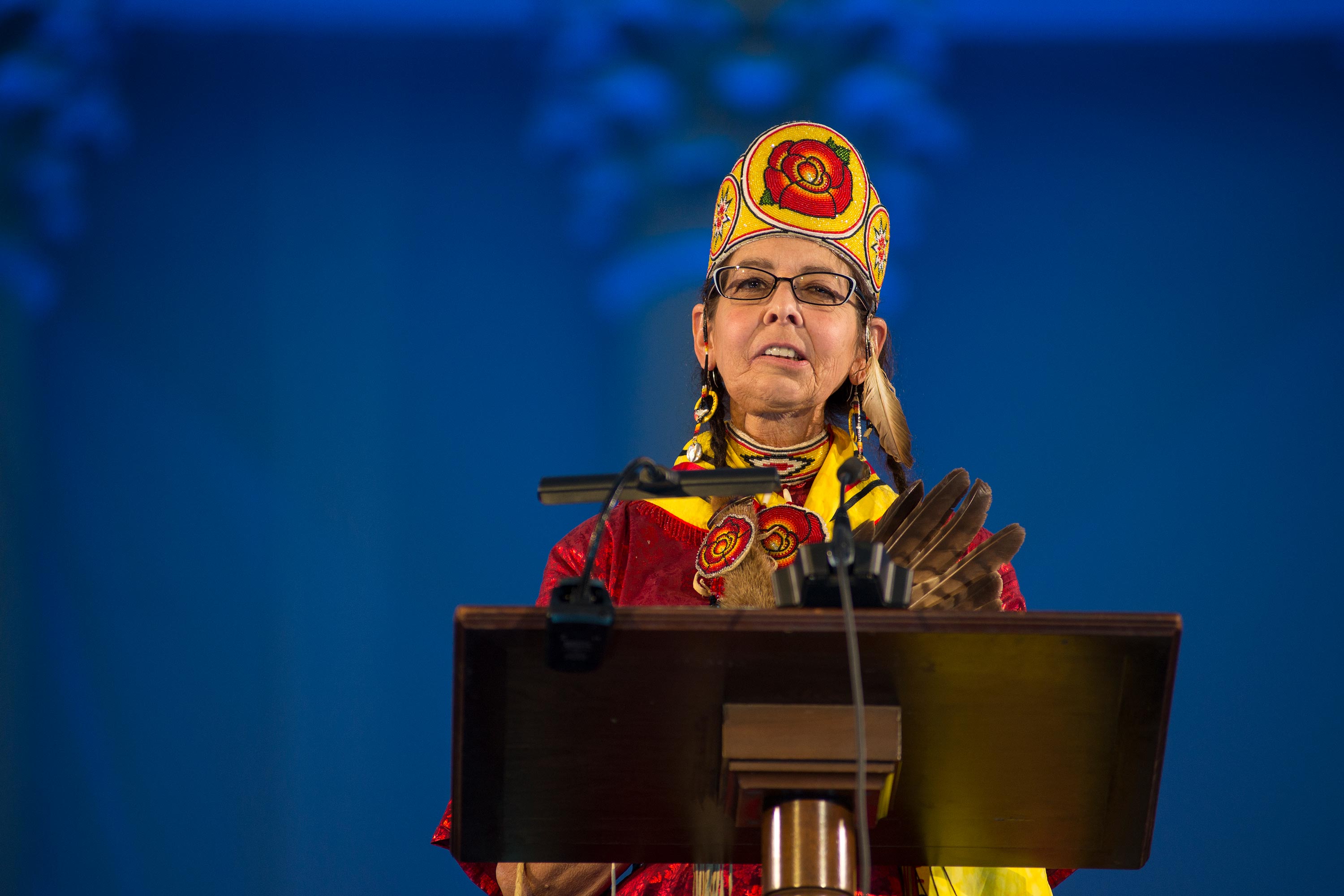 “She had tremendous courage,” Hantman, a professor emeritus of anthropology, said. He recalled watching her fight for recognition of native cultures in universities, museums and government hallways across the commonwealth and around the country.

“She brought a lot of power to her work; she was a great spokesperson,” he said. “She was the central person speaking for Native Americans in Virginia, and she handled all of it with grace.” 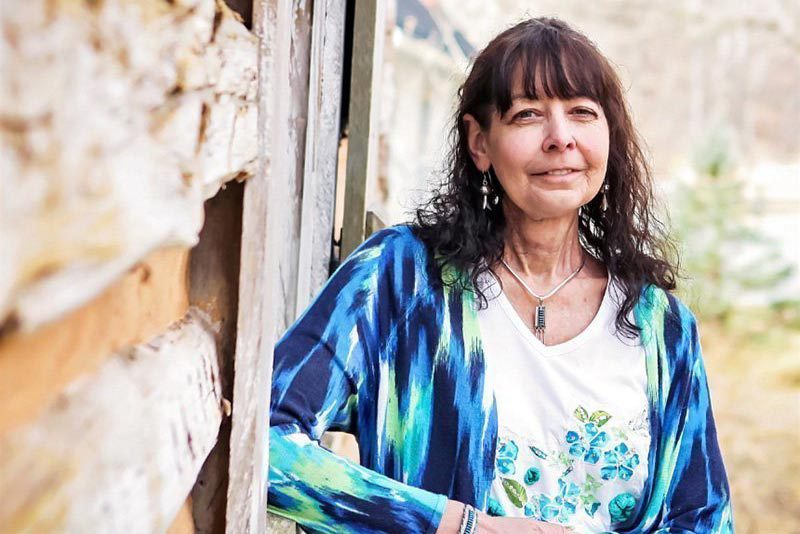 Wood, a member of the Monacan Indian tribe on whose ancestral land UVA stands, was a lifelong advocate for Virginia Indians and other Native American communities. She directed Virginia Indian Programs at Virginia Humanities and was the first Monacan Indian to complete a doctoral degree at UVA, earning a Ph.D. in anthropology in 2016 and teaching several classes in that department. She was also an accomplished poet, publishing two poetry collections, “Markings on Earth” and “Weaving the Boundary.”

“Karenne was a fierce advocate for the rights of Virginia Indians and indigenous people, and she did that hard work knowing that she might never see the full impact of it in her lifetime,” Matthew Gibson, executive director of Virginia Humanities, said. “And yet, her work will flourish for generations to come.”

As an example, Gibson cited Wood’s work revising Virginia’s Standards of Learning to provide a more complete history of Virginia Indians, their culture and the violence perpetrated against them. That history, Gibson said, will give young Virginians a more accurate and vivid understanding of the commonwealth for decades to come.

“Karenne put so much hard work into that project, to make sure that the contributions of Virginia’s Indians are better recognized and the violence done to them better understood, as well as to champion and celebrate the fact that Virginia Indian tribes are vital citizens of our commonwealth today,” Gibson said. “She might never see the elementary schooler who absorbs that curriculum and later grows into a civic leader, but that will be her legacy.”

In 2015, Wood was honored by the Library of Virginia as part of its Virginia Women in History series, recognizing outstanding women working across the commonwealth. She also took her work across the country, meeting with other indigenous groups and advocating for, among other things, the return of sacred objects and human remains held by universities and museums.

“She made sure we were always thinking about how we engage with Virginia Indian communities and how we make sure that the histories we are telling are all of our histories,” Gibson said. “She brought voices that have long been suppressed into that narrative. That was her passion and mission, and she conveyed that to all of us to carry on.”

At UVA, Wood’s scholarship focused on the history and culture of Virginia Indians, including a thesis project tracing the history and evolution of language among the Monacan people. She worked with faculty members and colleagues across the University to grow efforts studying and sharing indigenous cultures, and to recognize the Monacan lands the university was built on.

In large part thanks to Wood’s efforts, many major university events, including events like UVA President Jim Ryan’s inauguration last fall, begin with an acknowledge of the Monacan nation. At UVA’s bicentennial celebration in October 2017, Wood herself opened the ceremonies with a Monacan blessing. 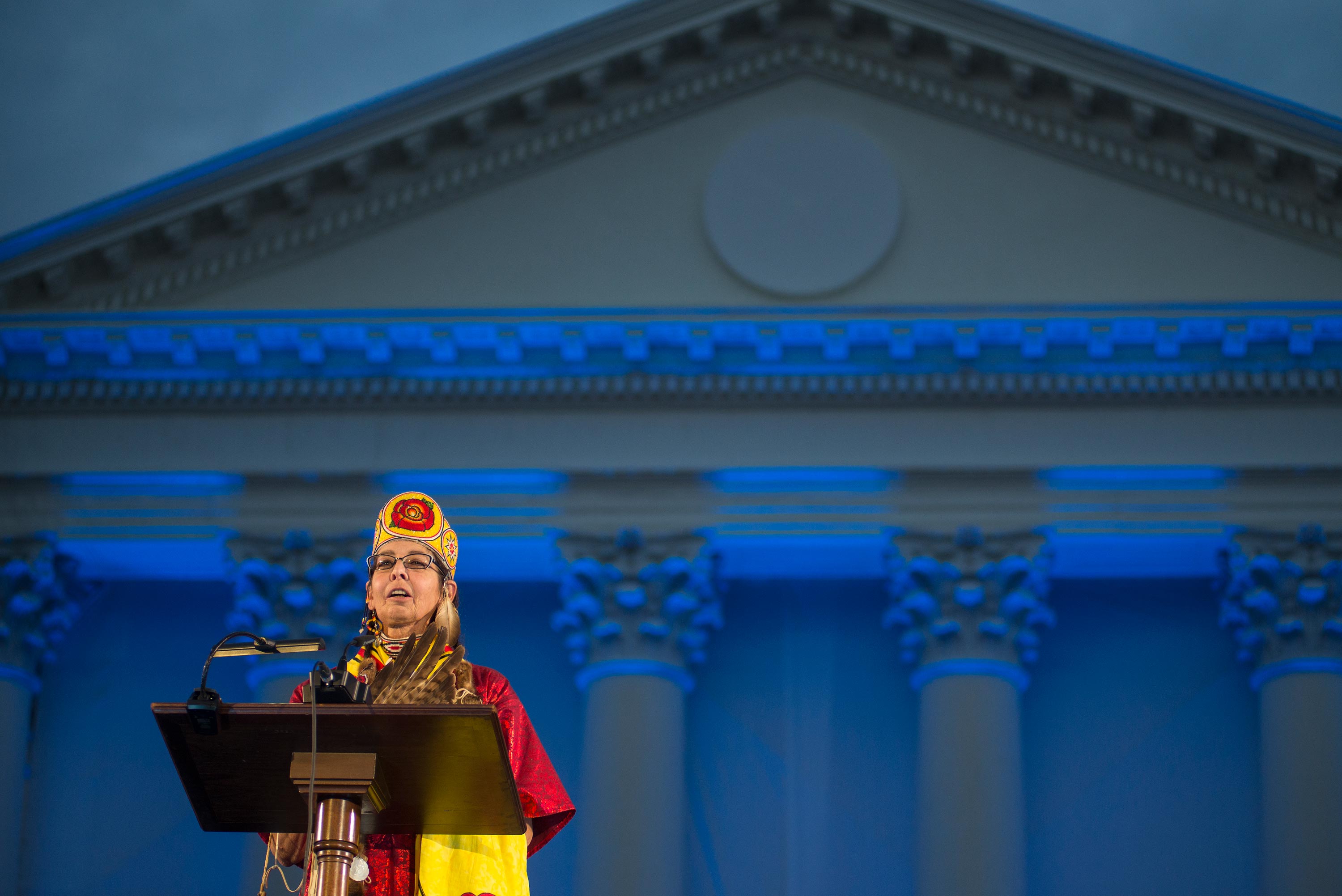 Colleagues remembered Wood as a dedicated and passionate teacher and advocate. She twice taught lecture courses in anthropology on North American Indian cultures and was scheduled to teach again this year.

“I know she was very much looking forward to that,” Hantman said. “She brought a wonderful humanistic approach to her classes … using all of these wonderful Native American novelists as texts for her students.”

“It was really significant for our visitors to be able to connect with a member of the Monacan nation at UVA, and Karenne really helped to make them feel welcome in our country,” said Smith, who loves to give visiting artists collections of Wood’s poetry. “She was an amazing resource and such a great connector among Virginia Indians.”

“She was such a loving, giving person, with an amazing sense of humor and a deep commitment to the local community. I am really going to miss her.”

Hantman, the anthropology professor, said Wood was a role model for Native American students at UVA in particular.

“At a university with so few native students, Karenne was a great inspiration,” he said. “She wanted as much as anything to see a greater presence of native students, and to see more courses about native history here.”

Thanks in large part to Wood, Hantman said that change is happening.

“We have made a lot of progress toward having a critical mass, finally, that is creating interest in indigenous studies across disciplines,” he said. “I think that is Karenne’s legacy… I’m sure she would say that we have a long way to go, but there is so much going on in this area now, and that is her doing.”

Thinking of all Wood leaves behind, Hantman recalled one of her poems, “The Lilies,” about her fight with cancer and wondering if she would live to see the bulbs she planted in the ground.

“I think Karenne planted a lot of lilies across this state and across the continent,” Hantman said. She might not be here to see them, but they will continue to bloom.

A memorial service for Karenne Wood will be held on Wednesday, July 31 at 1 p.m. at the UVA Chapel. Wood is survived by her two daughters, Adrienne Brown and Emily Oden, her mother Gwendolyn Rivett-Olsen, her brother Keith Wood and many loving family members, friends and colleagues.

What Is the ‘4th Side’? END_OF_DOCUMENT_TOKEN_TO_BE_REPLACED